After breakfast at Casa Sucre, we met up with CT’s parents who were staying in a different part of town. We were all going to spend the rest of the day exploring Casco Viejo with its various historical buildings, monuments, statues and more. Of course all of that walking made us hungry, so we needed a place for lunch. Since CT & I both heavily researched restaurants before the trip, we decided that a relatively famous place in the neighborhood known for its tasting menu would be right up CT Dad’s alley. However, once we found Manolo Caracol, we learned that they were no longer open for lunch. Fortunately, CT had borrowed a Panama Fodor’s Guide from another wedding guest and we learned of another restaurant nearby which was opened by the former manager of Manolo. So, off we went to René Cafe, which advertised having a slightly smaller tasting menu.

After entering the tiny restaurant, we saw that we would be the only customers there. This resulted in great service throughout the meal, although a couple more tables did end up being occupied as we ate. The menus were quite the sight. Midtown Lunch would be all over this place. $8.50 for salad, appetizer, entree with “special” rice and dessert. 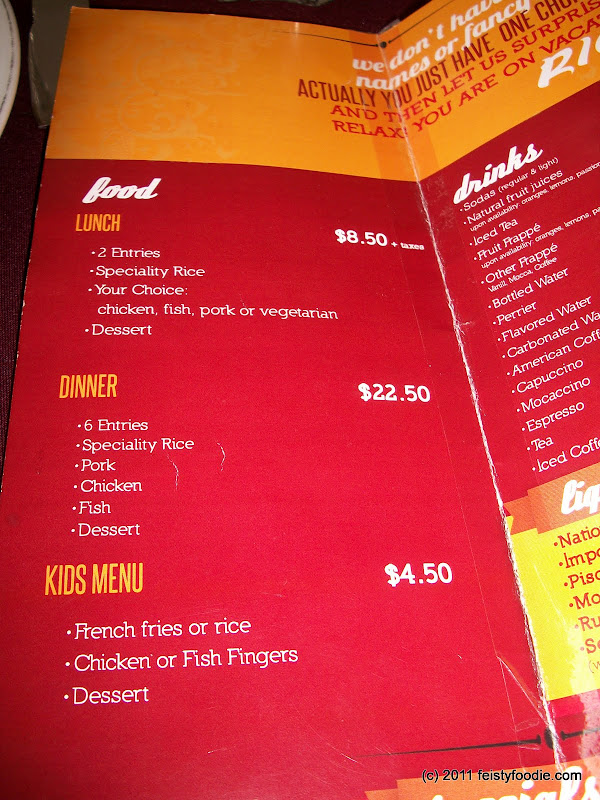 CT and I both decided to start with a Pisco Sour ($4.50). We both enjoyed the Pisco cocktails we had at Yerba Buena Perry back on Father’s Day, but never had it in its traditional form. It was quite frothy from the time it spent in the blender and tartly delicious. The dots of red tasted of cinnamon, but I’m not sure what it actually was. 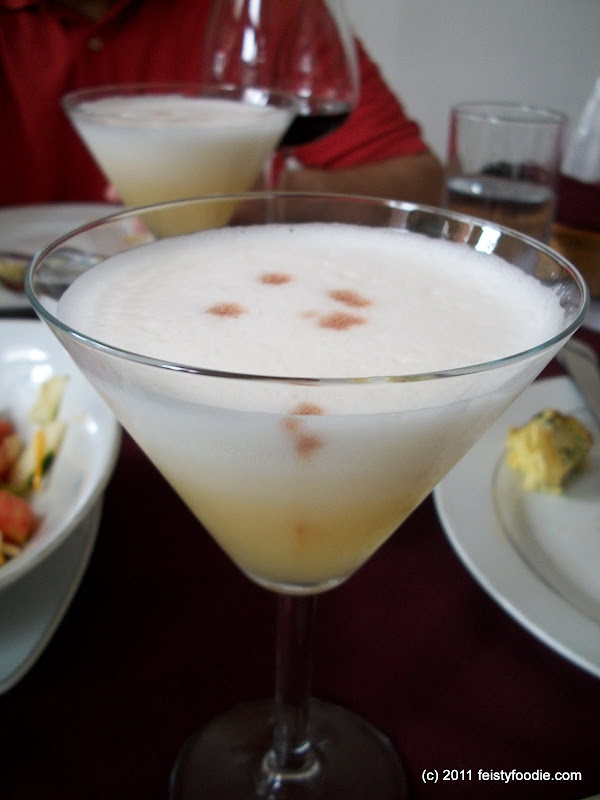 CT says: I think I like this pisco stuff. It’s kind of like a tequila but not quite as strong tasting. I saw a couple print ads for it recently, so I expect it will become the new trend in NYC bars quite soon and I will be happy to jump aboard that train!

For bread service, we were given a plate with pads of a herb & garlic compound butter. Quite a nice touch for them to jazz up plain old butter. 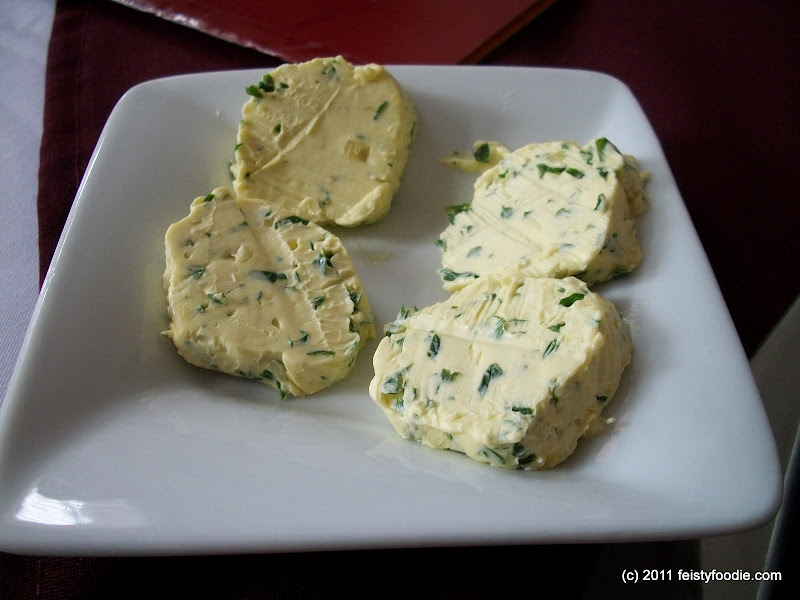 The appetizers and sides were served family style.

First, a huge salad. Some of us thought it was a bit overdressed while others thought it was perfect. We all wondering what the yellow/orange strips were. After talking with the waiter who didn’t speak much English and us not speaking much Spanish, he said it was pumpkin. I think it was more of a squash than the traditional pumpkin we have in North America, but it was still delicious and a good addition to a plain salad. 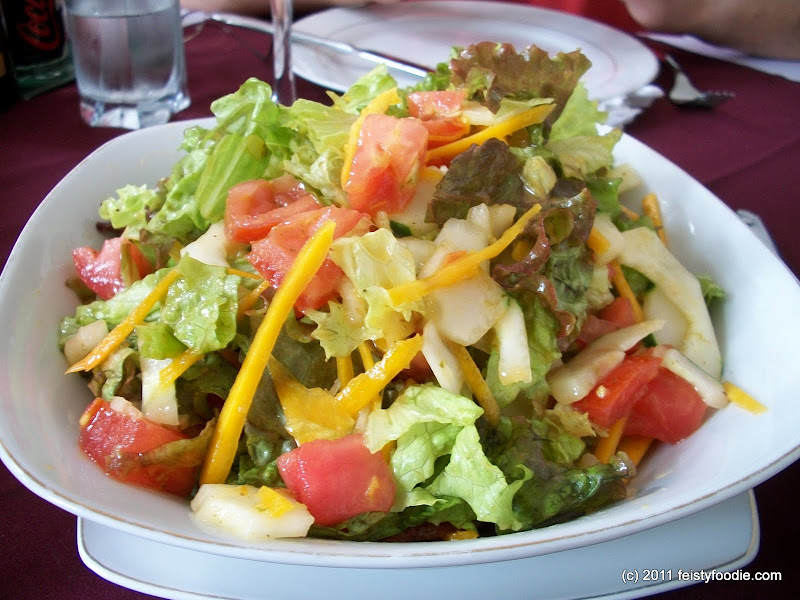 CT says: I thought it was dressed nicely and a really fresh way to start the meal. The pumpkin was such an interesting addition. I never would have thought to use it in a salad, but it really worked here.

Next, tortilla española. This was very good. The potatoes were nice and soft while the outer layer was crisp and flavorful. Eating a whole piece was quite heavy on the stomach, but it was too good to waste. 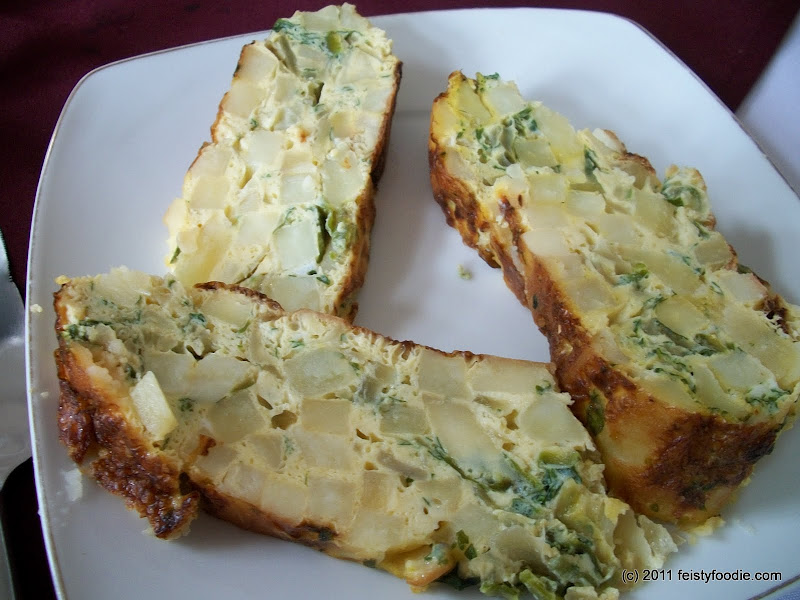 CT says: I also liked this, but it wasn’t the best I’ve ever had. It was a little too heavy for my taste. However, I still gobbled up my share of it.

Being in a tropical country, we were a little worried about CT’s Mom since she is highly allergic to pineapple (raw and cooked). CT talked to the waiter to let him know that her Mom cannot eat any “piña.” Thank you high school Spanish class!!

The first rice that was brought out was especially for her as it only had some saffron broth on it. The restaurant got a couple Yelp stars right there for catering to our dietary restrictions. 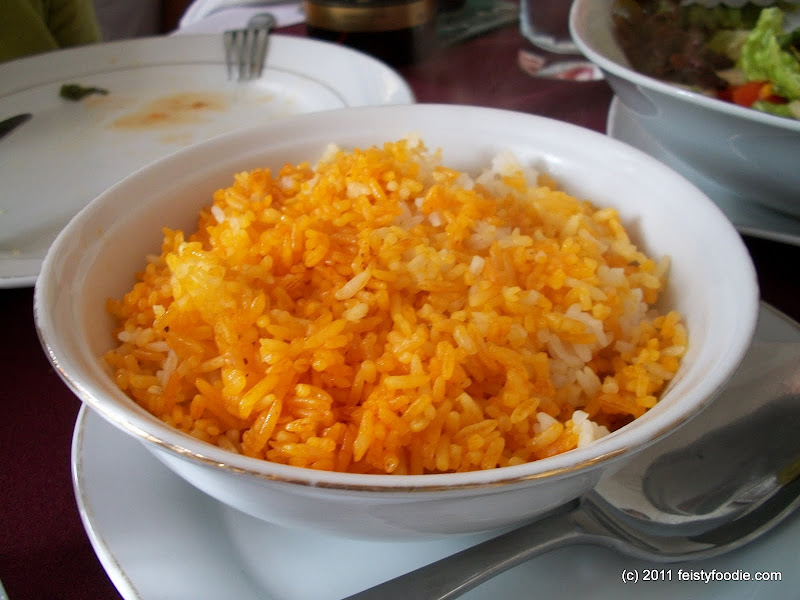 Another bowl of rice was brought out. As you can see, it was indeed “special” with a variety of veggies and bits of PINEAPPLE. It was almost like a fried rice from an Asian restaurant and quite tasty. Too bad CT’s Mom couldn’t have any. 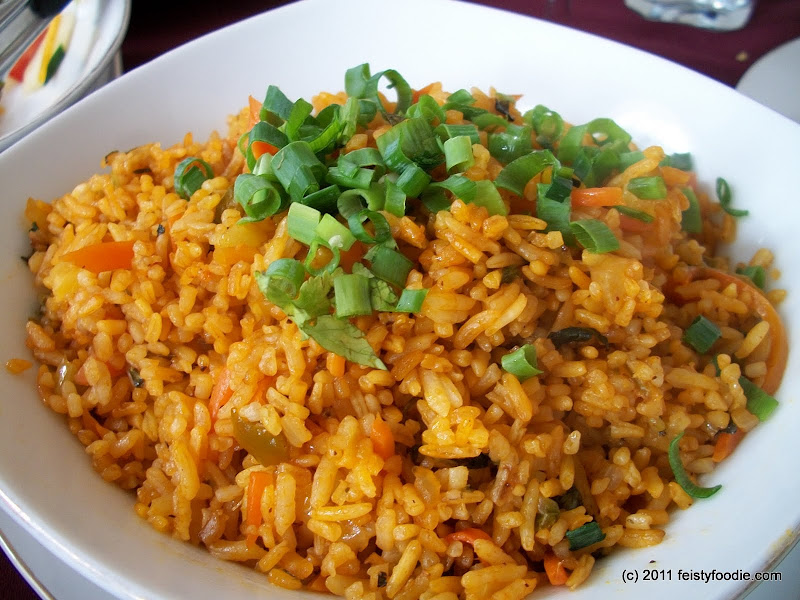 CT says: That rice was really good. A nice balance of flavors, sweet to salty, and well cooked. Poor mom was quite jealous. 🙁

Since there were only three options for mains, vegetarian doesn’t count, we ended up ordering two fish and two pork.

I believe the fish was the local fish, Corvina, which was a sea bass. In this presentation, it was lightly pan-fried and topped with a fresh dill sauce. I could smell the dill from across the room. That’s how fresh it was. The fish was white, flaky and pretty mild tasting. This would be a good introductory fish dish for those of you that don’t eat fish. 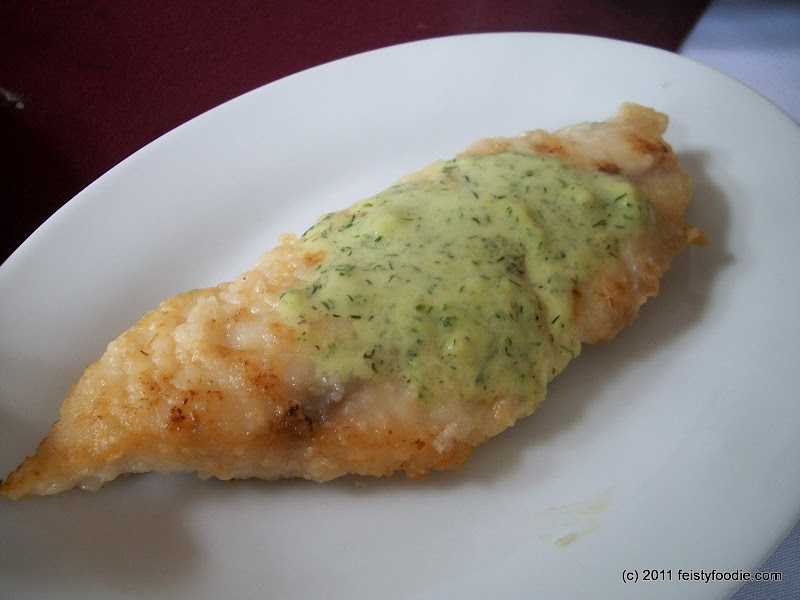 CT says: This fish was really well cooked – moist, light and flaky. The sauce was also light and fresh and didn’t overpower the taste of the fish, which was subtle and not at all “fishy”. However, be wary of the tiny little bones! Apparently my Dad didn’t notice them (probably chomped his way through them), but they poked my throat a little, so I kept picking them out. Still, in a place like this I believe fish is always the best choice.

The pork was a little less successful. It was just a slab of meat doused in a BBQ-like sauce. The meat was also on the tough side, which made chewing a bit of an adventure. Not terrible, but if I were ever to return, I would try the chicken or get the fish again. 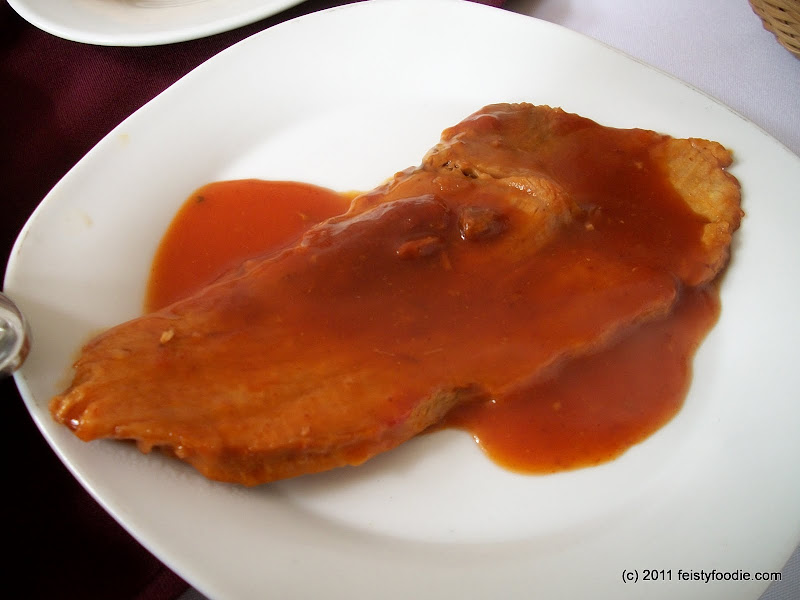 Finally to end the mini-feast, a small square of tres leches cake. It was the perfect size to give us just the right amount of sweet to balance all of the savory we just ingested. I have heard of tres leches before, but don’t believe I ever had it. It was super moist and delicious. 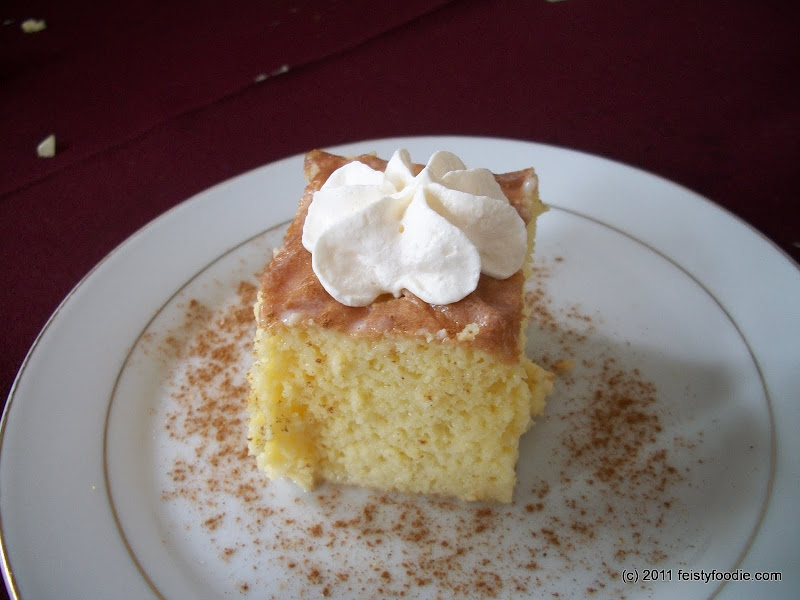 CT says: OMG this was delicious! As TT said, just the right amount of sweetness to finish the meal. It was clearly soaked in the milks for a long time, really absorbing all the yummy goodness. I’ll definitely have to try making this at home one day.

All in all, René Cafe was a good lunch choice. While the food wasn’t that remarkable and seemed like things I cook at home, it tasted good and was CHEAP! CT & I were worried that with the ties to Manolo Caracol that their food would be similar. Stayed tuned for our review of that restaurant to see what we found. Thanks to CT’s Parents to treating us to a nice, leisurely lunch.