A couple months back, the James Beard Foundation announced they were hosting a special pop-up restaurant in Chelsea Market for 27 days. As I mentioned in my Maharlika post, pop-ups are the latest trend in NYC. At the special JBF LTD website, they reminded me that the James Beard House is one of the first pop-ups ever. They started doing pop-ups twenty five years ago when they began inviting chefs from around the world to cook at the James Beard House. Luckily for me, I got to experience a few of those great meals and even wrote about a couple too.

A variety of chefs from all over country and even some based in NYC would be serving on different nights of the pop-up. Prices were quite reasonable for the four course meals with wine pairings($75 during the week, $100 on Friday and Saturdays plus 10% service fee, tax & tip included).

Originally I tried to get seats for Laurent Gras, the three starred Michelin chef out of Chicago, but due to reservation issues, it didn’t work out. No worries though since so many other fantastic chefs were coming. They have 4 seatings a night (6:30, 7, 7:30, 8). Tickets for the 8 o’clock seating are sold through Gilt City, one of the newest “deal” sites. Note that there is no discount on tickets bought through Gilt City, it is just your only option if you want the last seating.

The chefs I chose were Jon Shook and Vinnie Dotolo of Animal and Son of a Gun in Los Angeles. I actually remember watching the show they used to have on the Food Network a couple years ago before they opened Animal. Anyone else ever see “Two Dudes Catering”? It was quite watchable to see two hippie/laid-back guys cook some amazing food. Animal has become one of the hottest restaurants in LA since it opened a few years ago. Son of a Gun is their newest restaurant that is more seafood based as opposed to the meat-centric Animal. Since I have no plans to go to LA anytime soon, this was a fantastic opportunity to try their food. 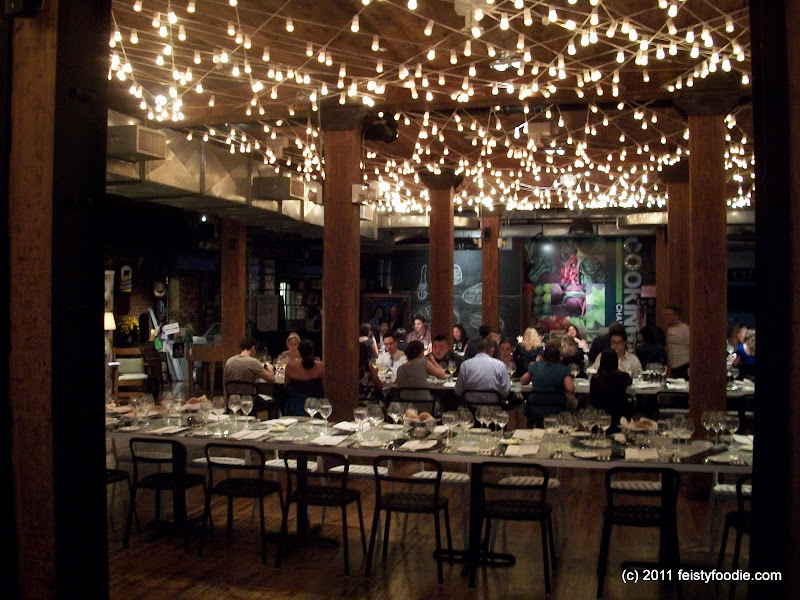 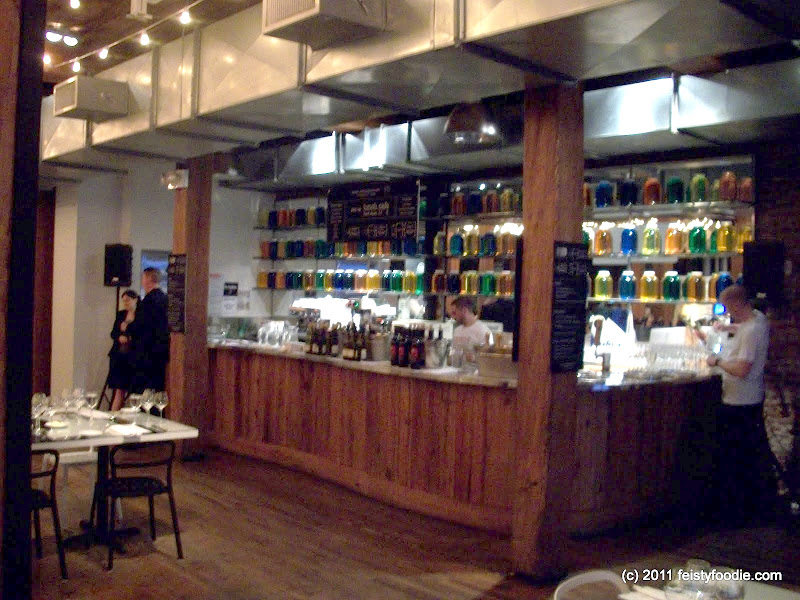 After arriving a little bit early for our reservation, we were herded off to the side with the other diners waiting to sit. Fortunately, they had glasses of Prosecco and bowls of spiced nuts to tide us over. We noticed that they were taking the pop-up theme really to heart. Numbers counting down the days were everywhere. Even the servers wore t-shirts with numbers that they crossed out themselves each night. It was definitely a lot more casual than dinner at the JB House. 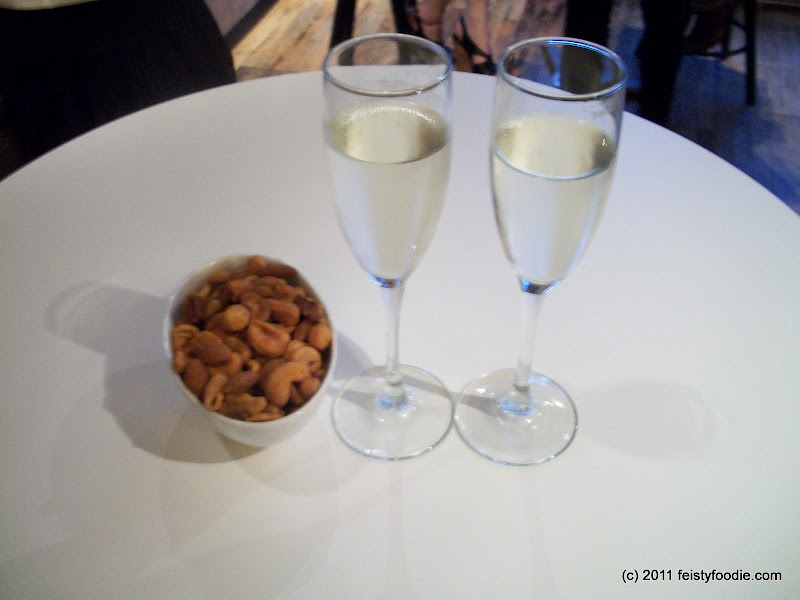 Since the chefs are pretty popular among the LA crowd(i.e. celebrities), I wondered if we would see any famous people. We ended up seeing Aziz Ansari and Kate Krader(Food & Wine Mag) in the group seated before us. Later on, Tom Colicchio walk in and head to the kitchen to presumably talk to the Chefs and Gail Simmons came in at the very end of the night. Two Top Chef judges in one night, we hoped Padma would walk in to complete the trifecta, but alas it was not meant to be.

Once we were seated, we were able to enjoy some bread that was already on the table. I liked the use of a colander as the bread basket. I also noticed that we had a Wüstof steak knife in the place setting. Fancy! 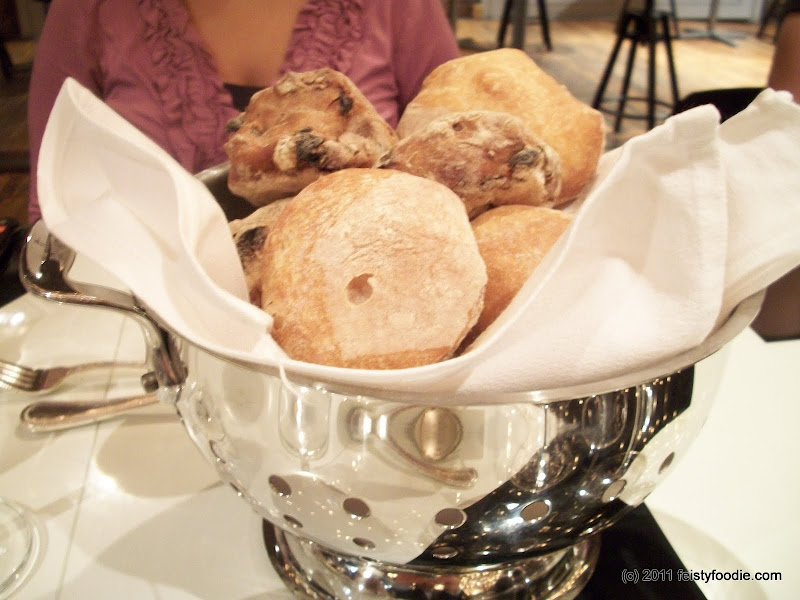 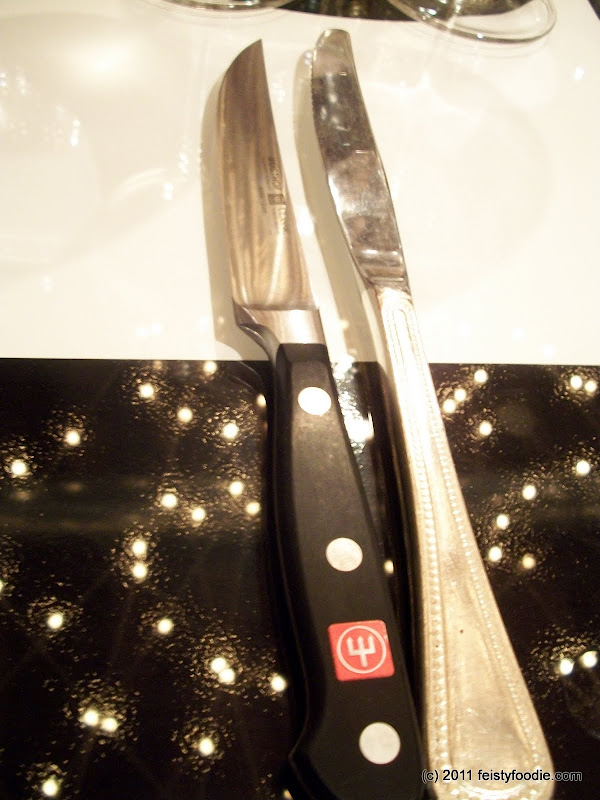 First course: Hiramasa, Mojo de Ajo, Red Onion, Sunchoke. Paired with Boulder Bank Sauvignon Blanc 2008 (New Zealand). I actually had no idea what hiramasa was when I read the menu. I had a chance to talk to Chef Jon after the meal and learned they got the fish from Hawaii. Further research found the fish is a type of yellowtail, similar to hamachi. My first bite ending up being one of the pieces with the slice of green chili. YOWZA! The chilies were extremely hot, not for the feint of heart. The fish was very light and delicate with no hint of “fishiness,” so it worked very well with the searing heat of the chili. The onion and crispy sunchokes brought a good crunchy texture to the plate. This was one of the largest and tastiest crudos I have ever had. Like CT mentioned when she had wings at The Stag’s Head, the heat brought some pain but I kept going back for more since it was so good. The wine was extremely light and tempered some of that heat perfectly. 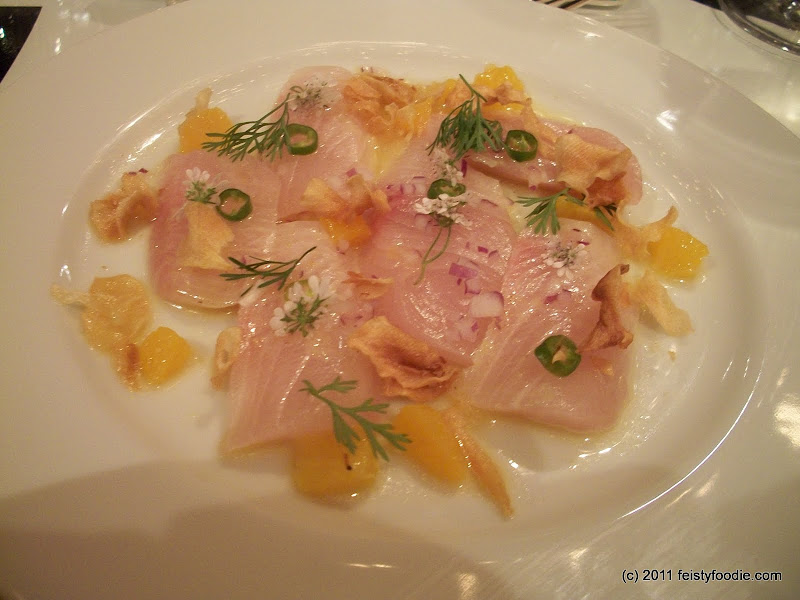 Second course: Foie Gras, Biscuit, Maple Sausage Gravy. Paired with Patz & Hall Dutton Ranch Chardonnay 2008 (California). Yes, you read that correctly. Even before tasting, I think this dish would end up in the top 5 most indulgent dishes of 2011. CT & I tasted the wine before the food came out and both disliked it. It was one of the most “buttery” Chardonnays I have ever had. The reason why I don’t drink Chardonnay. It coated my entire mouth in a heavy buttery funk. For those of you that know me, I am not really a fan of foie gras. I’ll eat it occasionally if it is part of a set menu, but would never order myself. I like sausage gravy even less; simply too heavy and unhealthy for me. Since this was a special dinner, I kept an open mind. This was a pretty amazing dish! The foie was seared perfectly. The sweetness from the maple was the heart of the dish. It wasn’t overly sweet, but enough to reduce the livery flavor of the foie. The wine actually ended up pairing well because I didn’t hate it as much while we ate. I could have fallen asleep on the table right then and there. 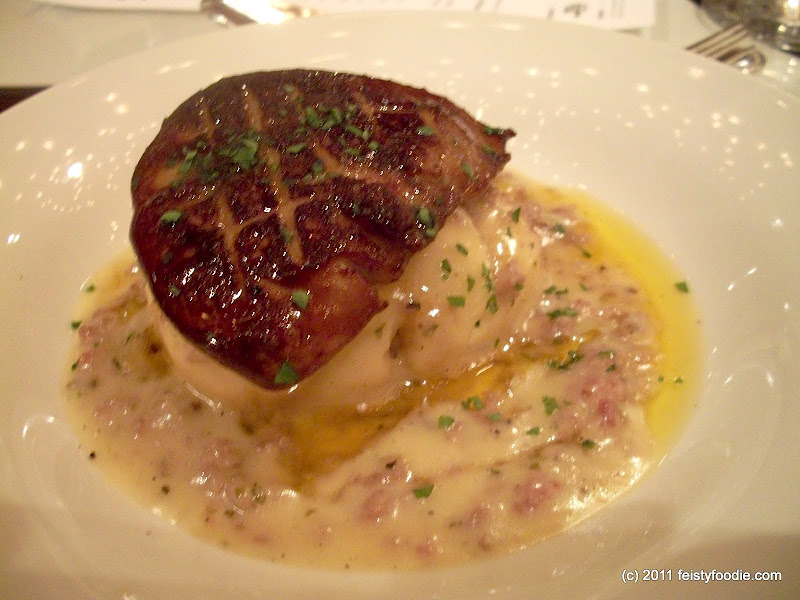 Third course: Thai BBQ Quail, Scallion, Citrus, Cashew, Yogurt. Paired with Renwood Zinfandel 2007 (California). This won the award for the prettiest dish of the night. Check out the little flowers sprinkled about. This was like the best grilled chicken salad I ever had. The quail was very flavorful and grilled perfectly. Lots of carcinogens! Unlike some of the diners next to me, I wasn’t afraid to cut the little sucker up and eat pieces off the bone. No way you can get much meat off with a fork and knife. The salad on top was great. I could really tell that the items were picked recently. Once again, the sweet citrus brightened all of the flavors. 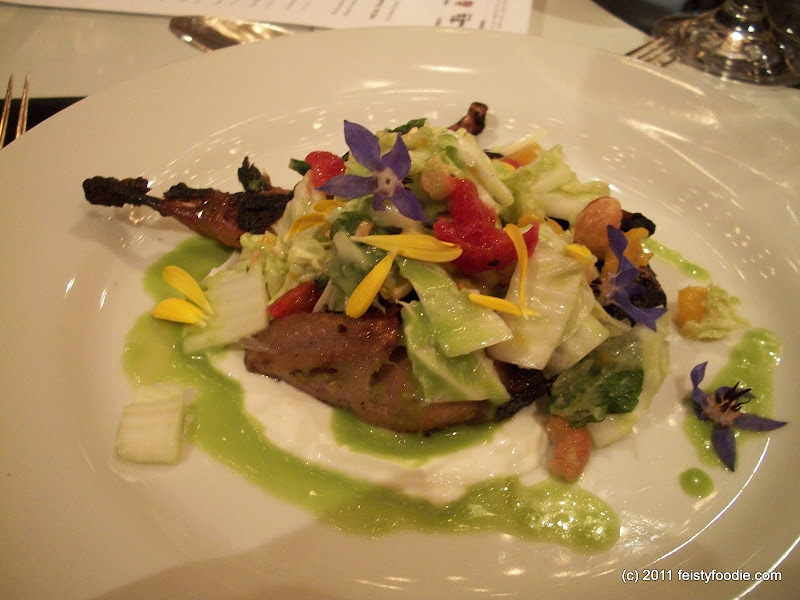 Another shot to see more of the quail. 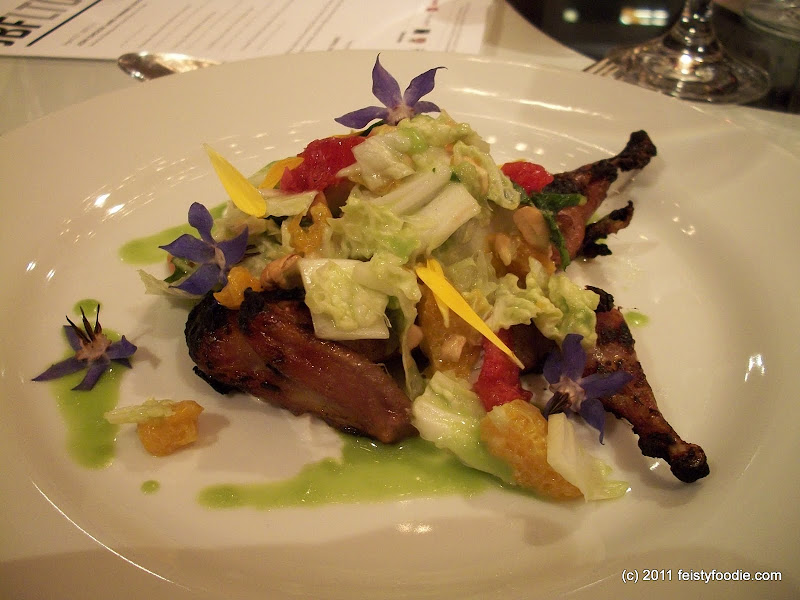 Dessert: Flourless Chocolate Cake, Banana, Peanut, Coconut Ice Cream. When I saw this on the menu, I was a little disappointed even though dessert does not rank high on my priorities. Flourless chocolate cake is one of my least favorite desserts. Aunt B actually makes a very fancy one, but it is still too rich for me. When I tried a bit of the crumbled cake, I was quite surprised to taste how light and airy it was. It reminded me more of a chocolate mousse than a cake. I think the little bit of salt sprinkled on top enhanced the flavor a lot. The coconut ice cream was also quite nice and refreshing. I could taste the natural coconut used, not some crappy artificial flavoring. The bruleéd banana was cooked perfectly with its good crunchy sugar top. I believe the white dots were marshmallow, maybe CT remembers? 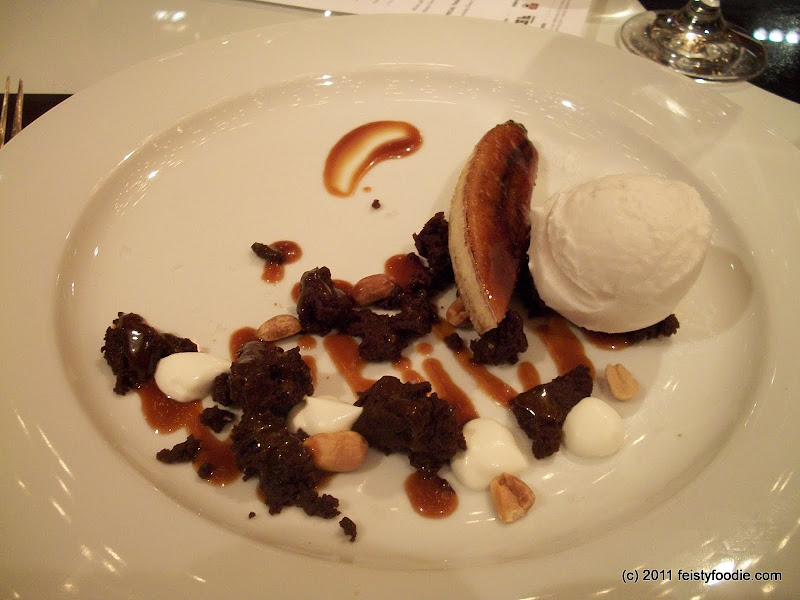 CT says: The white dots were whipped cream and marshmallows! And delicious! Overall, a truly unusual and fantastic meal. You could see a lot of thought and talent went into every bite. The beauty of each plate was only outshone by the creative mix of flavors and textures. If I find myself in LA, I will definitely be heading to one or both of these restaurants!

Actually before our dessert was served the chefs came up to say hi to the room. We were part of the last seating so 75% of the people there were starting to leave or already left. The four rows of tables were included in the number theme and had a countdown on them. The chefs came and crossed out the “12” with spraypaint since it was the end of the twelfth night of the pop-up. Vinny went back to the kitchen, but Jon came around and thanked all of for coming and answered any questions we had. He was very nice and appreciative of the opportunity to cook at the event. 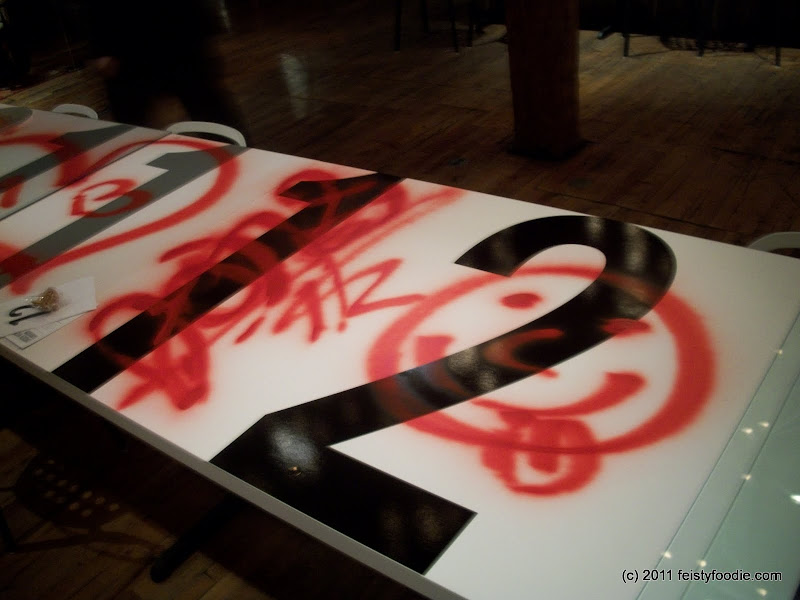 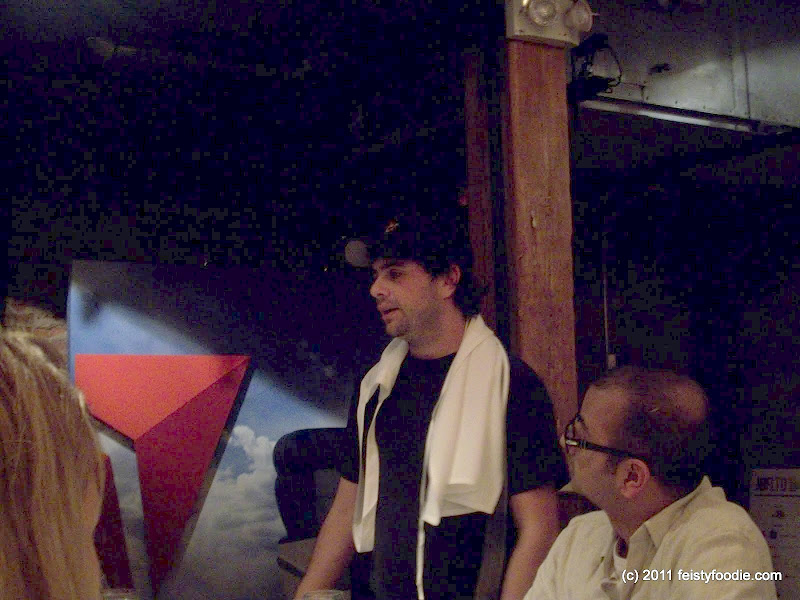 We were giving a parting gift of a special fortune cookie along with a James Beard card with a funny quote and recipe for his Tarragon Chicken. We then took the time to walk around the space since they had a couple different displays set up. This one was a little living room with various pictures of Chef Beard. There was also a cardboard cutout of James Beard and Julia Child that you could take a picture with. Your face replacing Julia’s. CT & I may have done that…. 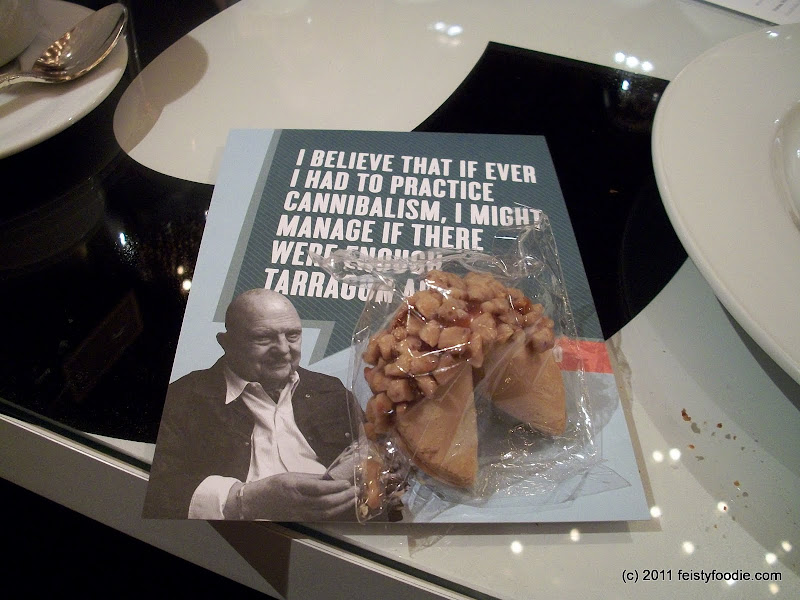 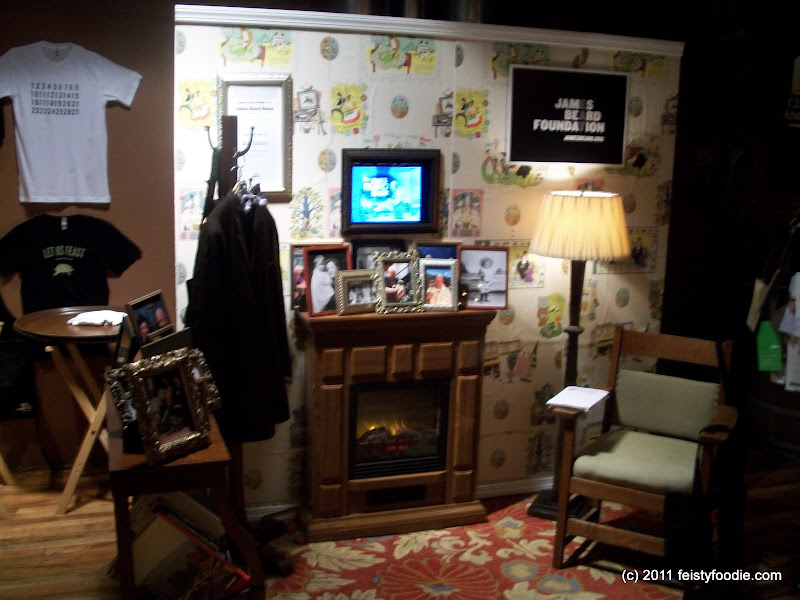 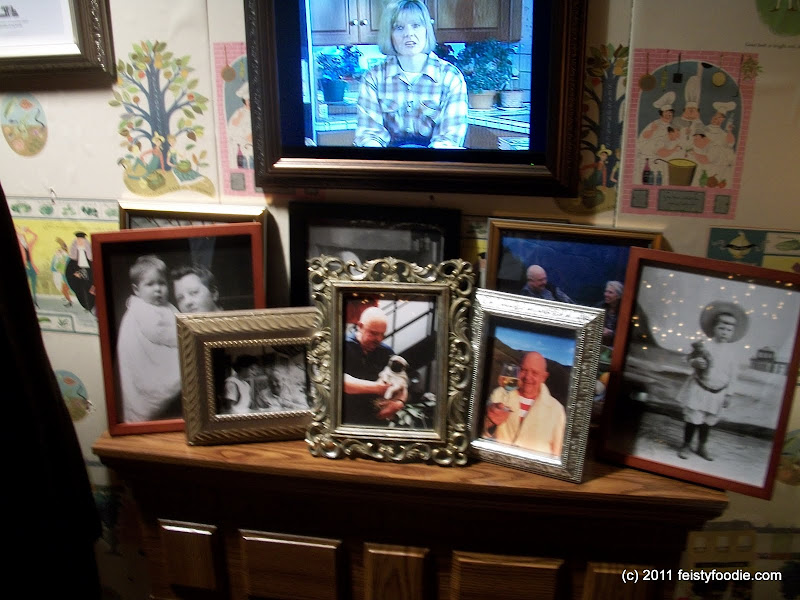 All in all, it was a FANTASTIC event. It was great to get a taste of a LA hotspot without having to get on a plane. Unfortunately, I believe the rest of the dinners are sold out already. Hopefully, the foundation will host another pop-up soon since it was a lot less “intimidating” than a dinner at the House itself. For those of you that are looking for a great meal, you can go to the James Beard House for lunch or dinner without having to be a member. It is a great opportunity to be part of a meal that will never happen again.