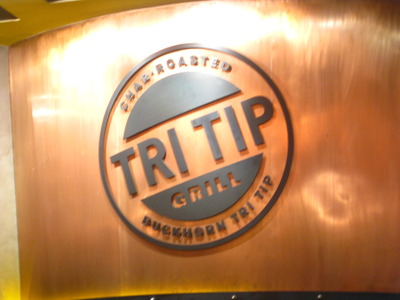 One recent Friday afternoon, Hungry asked if anyone wanted to grab lunch with her and TC.  I responded in the affirmative, as did Beer Boor, and we met up intending to visit Wu Liang Ye.  I was craving their dan dan noodles something fierce.  Unfortunately, though it’d been pretty empty the last time I’d visited around the same time, this time, the place was so packed there was no way those of us gainfully employed could actually wait for a table.  Boo… so alternatives were offered up, and Tri Tip was chosen.  I remembered the name of the place from Chris’s raves on Midtown Lunch.  Chris is my food nemesis, you may recall… he and I seem to disagree about what to eat constantly.  And he takes way better photos than I do. 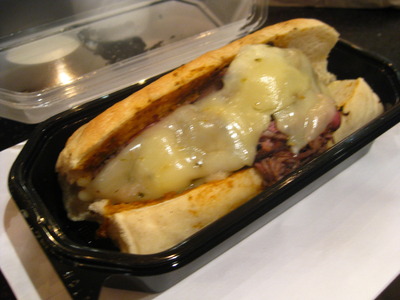 Beer Boor ordered a sandwich with cheese.  He liked his sufficiently, though we noted that since his sandwich was larger than mine and filled up the whole container, he didn’t get a little cup of gravy. 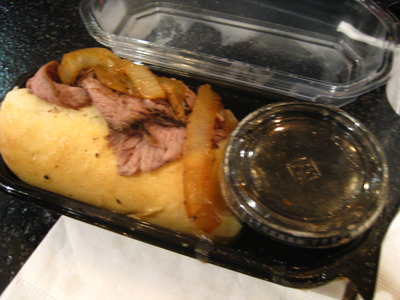 … which I did with my Little Buck sandwich, which didn’t fill the container.  I ordered the basic, with grilled onions and whatnot. 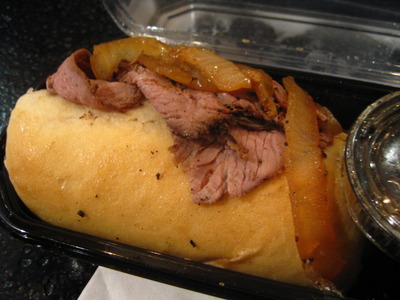 Finally, a photo in focus.  I couldn’t take a picture of the cross section because the sandwich was quite messy and it was too hard to try to take a picture of the sandwich while I held it.  Honestly, the sandwich itself was tasty, and the little cup of au jus was nice to dip into a little bit (I wound up giving most of it to Beer Boor, feeling bad that he didn’t have any).  But what really made the sandwich really, really good, in my opinion, was the ‘horseradish’ sauce they had on the side.  I took a little bit of the creamy white stuff and thought I’d just dip the tip of my sandwich into it to see if it’d taste good, but as it turned out, the addition really elevated the whole sandwich.  I tend to not like foods that require me to add things to them to make them taste good: I want food to be amazing the way I order it, thanks.  But I’m okay here – it is basically a fast food steak sandwich place, really – and I really liked the way the horseradish sauce took it to the next level.  Yum. 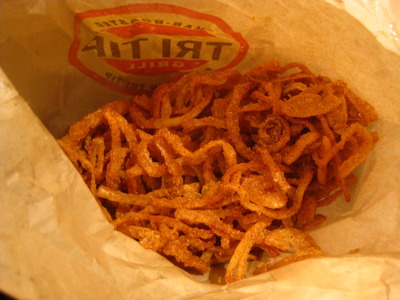 I also ordered onion strings for my side.  I don’t know why I didn’t take a picture of the fries Beer Boor ordered (that he let me eat – I mean, try).  In any case, these were called roadhouse onions, so I was hoping for onion rings – big, thick slices of onion, deep fried.  While onion strings are nice and all, I’m not a fan of foods that leave me dissatisfied with one bite, so I go back for more – a pinch of onion strings is so insubstantial that I tend to keep shoveling them into my mouth until I’m covered in grease, the bag is empty, and I smell of shame.  I like things with a bigger, thicker mouth-feel, so a bite is satisfying… which is probably why I eventually took all of Beer Boor’s fries and left him with the bag of onion strings.  I won’t be ordering those again.

Note that I ordered the Little Buck (4 oz of meat), Beer Boor ordered the Big Buck (6 ounces) and Hungry ordered the Little Buck with cheese (I think; I didn’t take a picture of hers because it looked the same as his but smaller).  My order, since I “made it a meal” with a soda and my choice of side (the onion strings), came out to just over $10 and I was full after I waited the requisite amount of time (I did want more food when I was done, but not because I was hungry, I was just not satisfied because of the onion strings).  Beer Boor and Hungry were both satisfied at the end and they’d both “made it a meal” for a few bucks more as well.

Yvo says: A perfectly suitable lunch option if you work in the area.  I wouldn’t go out of my way and scream from the rooftops how amazing the food is here, but it’s very tasty and completely satisfying (for me… with something besides onion strings) within a reasonable price range.  I would not hesitate to suggest this for a future lunch meeting, if the criteria includes a quicker lunch setting than anything sit down.  Yum!
recommended