On Friday nights, the girls and I try to meet up for dinner, drinks, what have you.  Admittedly, I’ve been slacking on attending these, for a lot of reasons, but one recent Friday, I met up with AB and we hit Ayza, the chocolate & wine bar we’d been a few times in the past just for wine.  This time, she had a Scout Mob code for 50% off the bill, up to $25.  Awesome. 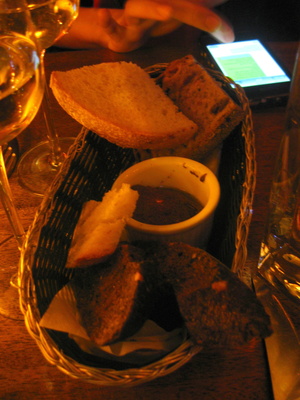 Though we had a reservation, we still had to wait for a table… which we both found a little annoying.  20 minutes, in fact.  The hostesses were super, super nice about it, and they were very apologetic, but why have a reservation system if you can’t at least figure out a way to minimize the wait time?  (I admit here that I don’t fully understand how reservations work, especially in places that accept walk-ins as well, but I’ve been to enough places that have some system in place that works better than Ayza’s did that I know it is possible.)  The super nice hostess handed us each a glass of bubbly while we were waiting as an apology for the wait, which I thought was a nice touch, but the wait was especially aggravating as, in colder weather, Ayza does not have any space to really wait.  We were totally in everyone’s way during those 20 minutes that we waited.

In any case, once we were seated, we were brought the above bread basket with olive tapenade for spreading.  Tasty… we were both starving by this point (it was close to 9pm).  We were also brought a small shot glass of hot spiced wine, which was just enough of a taste since neither of us enjoyed it.  I don’t know if it was on the menu or just something they were offering people for fun – I didn’t see it listed as a special drink or anything – but I thought that it was interesting to try. 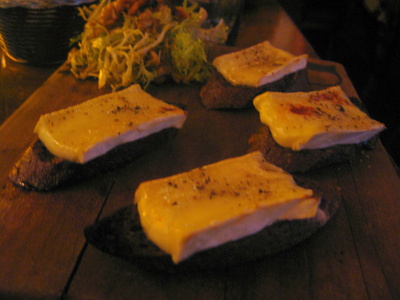 AB and I decided to split a few things.  First up was the roasted French brie crouton; a bit of brie warmed over a rye bread slice, drizzled with honey and black pepper.  I thought this was good, but I wouldn’t order it again.  Not enough interest to keep my attention; the side salad bit was nice to eat with it as well, giving it a little textural contrast, but otherwise, a big pile of mmmeh. 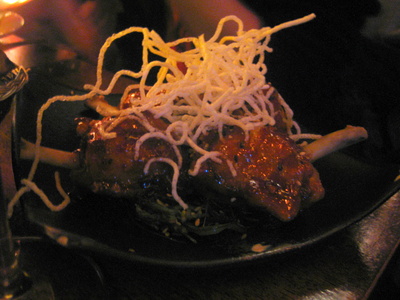 I’d been really keen to try the ‘angry chicken lollipops’ that featured prominently on Ayza’s website, so when they came I dug in eagerly.  They were spicy – enough that AB looked at me with concern when she tried hers – but I was okay with the spice.  Unfortunately, we both agreed that we’d had much better spicy fried chicken in the past, and we could certainly make better at home.  At the least, we could easily walk a few blocks from there and get Korean fried chicken in much larger quantity for a smaller price.  Pass. 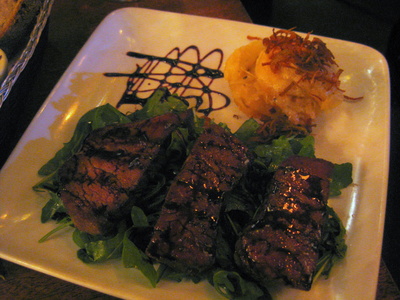 Our final choice was the filet mignon medallions, which was also featured prominently on their website.  I actually really, really enjoyed this dish – the meat was super tender, and those seemingly artistic squiggles of port reduction on the plate were actually delicious when swiped up with the pieces of meat.  The potato ‘cakes’ were pretty tasty too.  But at $22 for the plate, I would have been furious if we’d paid full price for that.  That is a bullshit portion, excuse my language, but at $22, seriously.  Total rip off. 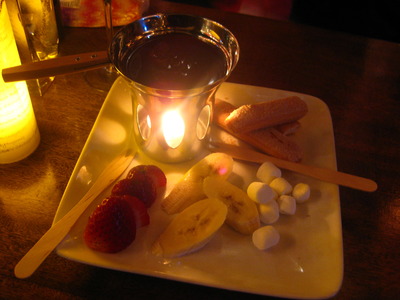 At the last minute, we decided to add on a chocolate fondue dessert.  I discovered that their lady fingers – I’m not sure if those were made in house, but slightly sugary, crackly crust, they softened slightly in the hot chocolate bath… absolutely perfect, not too sweet.  I enjoyed sharing this with AB, but it’s fondue.  Not rocket science.

Yvo says: While I enjoyed our meal, at full price the portions are simply ludicrous.  If you’re a wine bar, serve wine-friendly foods with wine-friendly portions and wine-friendly prices.  Is it necessary to gouge people on the food prices too?  (We all know wine prices are jacked up like mad.)  The service was fantastic, and I don’t have any problem returning for a glass of wine or two (though AB did point out we’d been there enough times now that it isn’t necessary to return, since it really isn’t that awesome save the location)… but the food prices are completely ridiculous.  I’ll note here that after the discount, we wound up spending $45ish a person (including tax & tip) anyway, because after the meal, we added the dessert and a couple of glasses of wine… pretty expensive.  Oh well.
while the food is tasty enough, it’s rather pricey for what it is… maybe just go for a glass of wine if you’re in the area