TT and I “recently” visited Otto together… since I’ve been there a number of times since my first time now, I dutifully took photos so that he could give his opinion on the place.  With apologies for the delay… dinner with TT at Otto:

After attending a few Midtown Lunch Happy Hours with Yvo and our budding Gchat friendship, we decided to combine forces and go to Otto since I have never been before and Yvo currently has a mild obsession with it.  Otto is known as the “cheap” Mario Batali place.  I have not gone to any of Mario’s restaurants, partly because of the hype especially when Del Posto opened with its $20+ pastas.  Upon entering on a Thursday evening, there was a healthy after-work crowd drinking some wine with some appetizers in the large bar area.  I really liked their tall marble topped tables that a group can stand around and drink/nosh.

I already did some reconnaissance on the menu beforehand and Yvo already insisted on one dish.  The real work came with trying to decide on what wine to get.  I consider myself to have better than average knowledge of wine, but with Otto’s gigantic list of Italian wine, I was quite lost.  They must have wine from every region in Italy.  I am not too much of a wine snob, so I asked the waiter for his recommendation for a red in the $30 range (as this was the low end of the prices).  He suggested the Barbera D’Alba Brandini.  It was quite good. 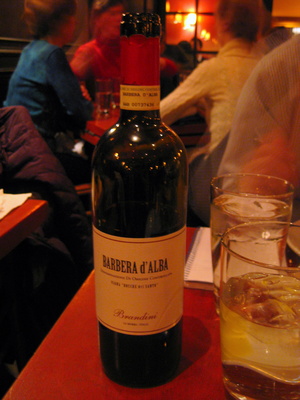 We started with the Pesci Grande, which Yvo got last time.  I am a huge fan of seafood salads, so this did not disappoint.  I would have to agree with Yvo and say the anchovies were my favorite as I have never had it before. 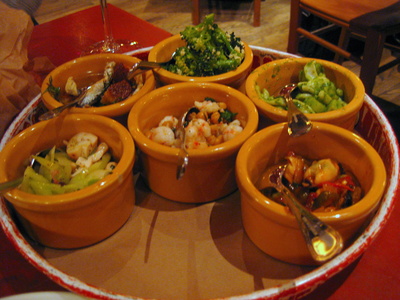 Starting from top right- calarami & potato, mussels peperonata & mint, shrimp ceci chiles, octopus celery lovage, anchovies with breadcrumbs.  We also got an order of broccoli & pecorino(center top).  The broccoli was extremely fresh and crisp and made our moms’ happy that we had some vegetables.  This dish was brought out extremely fast, which was a nice touch, but not unexpected when everything is premade. 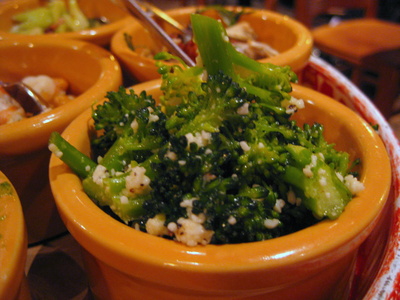 For a pasta, we went with the spaghetti alla carbonara.  I had heard positive reviews about their carbonara and have not had a carbonara since I made it at home last year.  Again, this and the pizza came out quickly so it sat for a while on our table while we still were working on the appetizers.  It was nice and creamy with a good saltiness.  I think it would have been better if we started eating it as soon as it arrived since the egg that is mixed with the pasta begins to congeal rapidly. 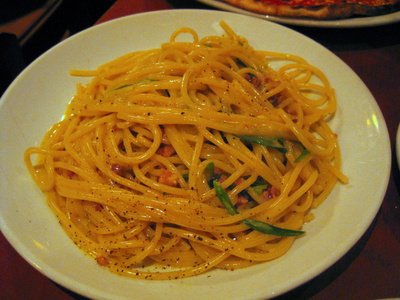 For pizza, we went with the prosciutto arugula.  I am not sure I could have downed a lardo pizza(see Yvo’s previous review).  The pizza was great, thin crust with a good char.  The prosciutto gave it a good saltiness balanced out by the arugula. Although it had gotten cold, it was a nice choice. 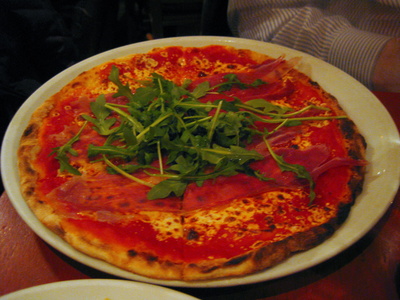 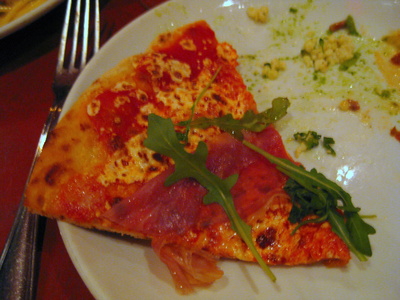 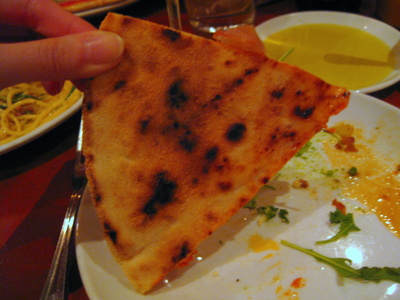 Although we were both quite full, I believe it is mandatory to get gelato.  Unfortunately, they didn’t have the salted caramel anymore.  I am probably one of the last people in NYC not to have ever had Olive Oil gelato, so that choice was a given.  We also went with the Creme Fraiche and Guiness.  All were good, but the olive oil was my favorite.  I am more of a savory guy and this one only had a hint of sweetness with some fresh olive oil drizzled on top. 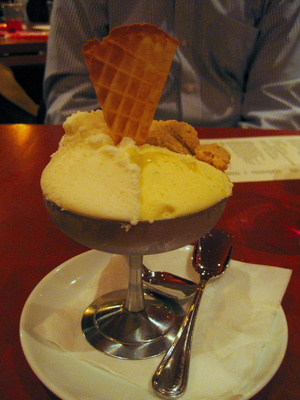 All in all a great meal worthy of skipping my usual gym night.

UPDATE:  Apparently, Yvo likes to make multiple reservations for special occasions.  She had a reservation for Valentine’s Day at Otto, but decided she would be going to Eleven Madison Park (ed note: review goes live on March 10!) instead.  When she offered the reservation to me, I checked with CT and she said she would love to go as she had never been to Otto either and had to work when I went with Yvo.  Unfortunately, being the romantics we are, we didn’t take any pictures of our Valentine’s Day dinner.

We also got the Pesci Grande, which was just as good as the first time I had it.  For a pasta, we got the Buccatini Al’ Amartriciana.  Our waitress described the pasta as “hollow spaghetti” with guanciale, tomato, and pecorino.  It was a nice dish with perfectly cooked pasta.  For pizza, we went with the Pane Frattau.  It is basically a sauced pizza with a fried egg on top.  The egg was nicely cooked to allowed the yolk to run all over the pizza.  A very unique and tasty pizza.

The gelatos we chose were Olive Oil, Dark Chocolate, and Caramel.  They were a great combination.  Either the Olive Oil or Caramel had some salt mixed in which gave it a nice contrast to the sweetness.  It was strange as the Caramel was not listed as Salted Caramel as it had been previously and I didn’t notice any salt the last time I had the Olive Oil.

Overall, it was a great Valentine’s choice.  The place was busy, but not crazy, and we didn’t have to deal with any special prix-fix menus.