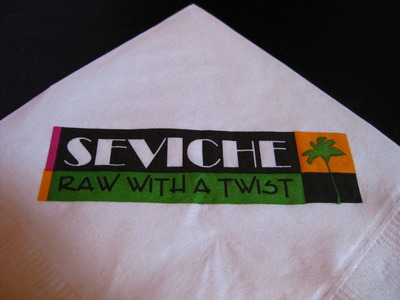 After a lot of miscommunication and grumpy stomping around by me, I finally revealed to the BF that the reason for my moody sulkiness was because I was feeling woozy from not eating since the disastrous eggs benedict, which caused the bf to mock me quite a bit.  Whatever, low blood sugar is no joke!  However, it was coming up fast on 6pm, and we had plans to meet up with some friends of mine around 7 who happened to be in town for the very same reason as we were.  (It’s a little freaky… but I’ll explain that all in a few posts’ time, be patient!)  But I really needed to eat something, and BF understands that compulsion is the order of the day, and besides, he was down with hitting up a bar for a drink while I snacked on something small.

We wandered around near the 6th Street Bridge on the south/east side, which was near the restaurant our dinner reservations were at, and stumbled upon this semi-trendy looking lounge/bar/whatever.  It looked fine, so in we went. 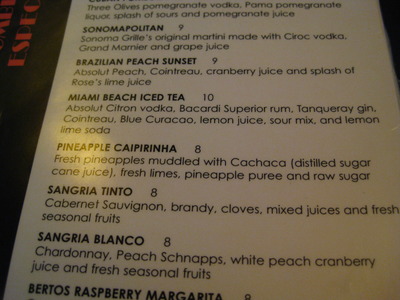 The drink menu boasted some interesting offerings… I chose the pineapple caipirinha, while BF asked me about mojitos.  I don’t like mint unless it’s with chocolate, and told him that mojitos were not my thing… but he proceeded to order and down three of them successively.  Fun.  He noted at one point that they went a little crazy with the mint, to which I had to roll my eyes; come on! that’s the whole point of the drink! 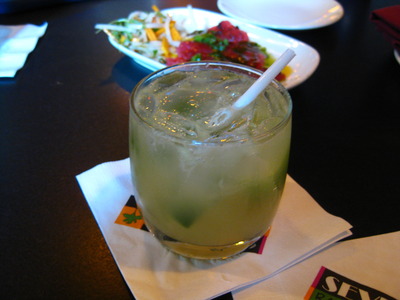 My pineapple caipirinha – I fully admit I was thinking about the version I’d gotten at Kittichai almost 2 years ago now when I ordered it.  Let’s just say this couldn’t hold a tealight to the one at Kittichai, which had been pineapple-goodness, fresh pineapple juice, sugar cane pieces to chew on, just awesome.  This one was alright but tasted a bit too much like well liquor or bad vodka.  Yuck. BF decided, of all things, that he wanted ceviche.  Now, I realize we were in a place called ceviche (with an S).  That S made me nervous.  It also made me nervous because we were essentially in a landlocked state (I looked it up and Wiki says it’s true; PA does not border the ocean whatsoever, therefore, it’s a landlocked state! stop arguing with me!).  Plus? Can I be totally honest? BF has a sensitive stomach, and often makes poor choices with regard to eating certain foods that I will only deign to order in the more trusted and more expensive restaurants.  Raw fish was not something I would recommend ordering from a place such as this.

BF chose to ignore my concerns. 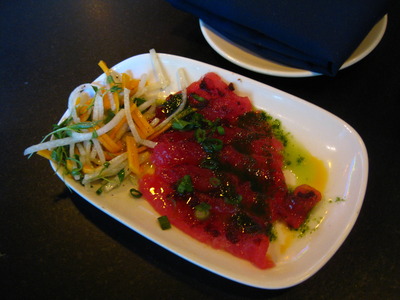 He did, however, allow me to pick the style – he chose ahi tuna, and I chose tiradito (above menu has the description).  The ‘ceviche’ wound up being ‘ok’ – slices that were a bit hard to pull apart, the flavor was alright, and we didn’t get sick.  I like the jicama and calabaza slaw on the side better than the fish itself, which was slightly too mild.  BF liked it fine, inhaling his. 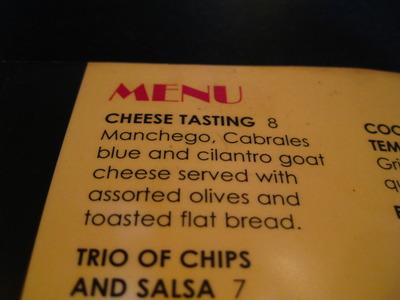 I opted for something that sounded snacky and noshable, which meant the cheese tasting for me.  I like variety, and I wanted something small to munch on before dinner but not ruin my appetite! 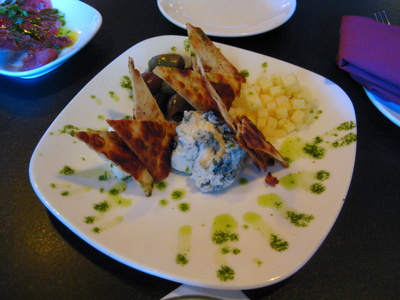 Pretty darn yummy, is a little strangely plated.  I liked the cheeses, though, per usual, BF dogged the harder cheese (the small cubes in the back right).  When I’d finished the toasted flatbread above, I still had cheese leftover, but the person who’d taken our order appeared to ask me if I wanted more flatbread, which I thought was awesome.  I didn’t get a chance to see the bill (BF and I made a quickie bet on the Mets game that was being broadcast on the TV, and I won, so he paid for this), so I’m not entirely sure they didn’t charge us for it, but based on what the final bill was, I don’t believe they did.  So it was a nice touch.

Speaking of service, though, we had this crazy bartender lady who kept hovering by us, trying to engage us in conversation, even when I politely made it clear that we were on a date and not interested in conversation.  She also brought up some really awkward topics that just made me feel really uncomfortable.  Some people may say this makes me an a-hole, but when I sit at the bar with my boyfriend, it doesn’t always mean I want to talk to the people around us, bartender included.  Sometimes that’s just where we want to sit; I don’t think it requires talking to the bartender.  (I’ve been the bartender before, and when people want to talk to me, I let them; I didn’t force myself into their conversation!)  She also would just stare at us, with no expression on her face, whenever we said anything… I think what also irked me was that when I’d say something, she’d flick her eyes over me, then continue talking to my boyfriend.  Very irritating.

Yvo says: It was a mostly suitable place for our purposes – grabbing a quick drink and a small snack before dinner, barring the annoying bartender who kept butting into our conversation.  I found everything pleasant enough, but do note that the place was pretty empty around 6:30 pm on a Saturday, I’m not sure how trendy or cool this place is if you’re a local.  Also, our tab came out to $60 including tax/tip, which was for the above, plus 3 mojitos… which seems a bit pricey – I mean, I’m used to paying $8-10 for cocktails… in Manhattan (and more in Las Vegas).  This is neither of those places.  Take that into account if you plan on drinking here.
it was okay