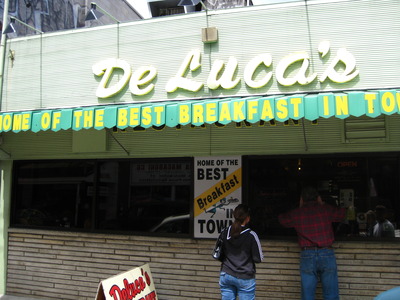 While researching breakfast places in Pittsburgh, there was a clear divide among the locals: Pamela’s or DeLuca’s.  Apparently there’s been somewhat of a feud between the two places for years, though I found enough online suggesting that Pamela’s was touristy and had suffered in quality for a while that I chose DeLuca’s.  Plus DeLuca’s was smack dab in the middle of the Strip District, where I wanted to spend our Saturday morning anyway, and that’s how we wound up there.

Despite a line out the door, we were seated within 10 minutes of getting on line (the line ended at the door inside, actually; they didn’t let you in until you were to be seated, as the place doesn’t have much in the way of a foyer/standing room).  Shortly after we were seated, the line died out completely, to come back in full force as we were leaving; I guess those’re the ebbs and flows of Saturday morning brunch service. 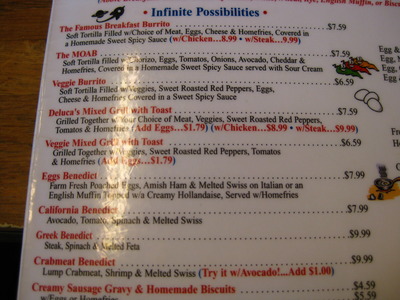 Throughout my research, I came upon the same recommendation time and time again: get the eggs benedict at DeLuca’s.  You may realize that I love eggs benedict and order it as often as I can, since I cannot/do not make Hollandaise sauce.  So of course I had to order that, but my aversion to ham (after being viciously poisoned with it one year… I was out of commission for an entire week, resulting in the rapid loss of 15 lbs.) led me to order the “crabmeat benedict” listed as lump crabmeat, shrimp and melted swiss. 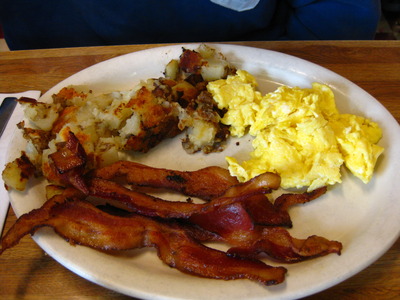 Before we look at my dish, here’s the BF’s.  His stomach was bothering him a little, so he opted for something ‘safe’ – scrambled eggs, bacon, home fries, and some toast (not shown).  His looks a little skimpy, yes?  Well, he said it was sufficient, nothing new or different, but fine. 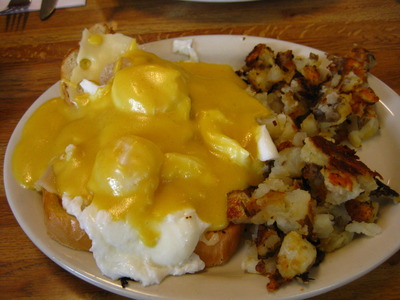 Here’s my dish.  Skimpy quite on the far end of the spectrum from that!  I was asked whether I wanted Italian bread or English muffins, and of course opted for the ‘different’ one, the Italian bread.  I was curious how that would play out.

Well… let’s take from my notes: the poached eggs – overcooked; the frozen/defrosted shrimp undercooked; more shrimp than crabmeat, very little crabmeat!!! (so why call it crabmeat benedict?); generous portion overall but heart attack plate – who eats that much hollandaise sauce?  $10 isn’t bad but more crabmeat please, even if it is canned

The sauce was alright, not quite lemony nor bright enough for me, and drowning everything on the plate – and I LIKE sauce.  The potatoes were good though – super crispy in spots, mealier in others, but I like that sort of balance in my breakfast potatoes.  Just… my drowning plate… I couldn’t enjoy my overcooked eggs much (I LOVE runny yolks), the sauce overwhelmed quite a bit, and the flavor of the (practically raw) shrimp and 3 lumps of crabmeat were lost in mush.

Oh well.  Can’t always believe everything you read on the internet – some people are just fiercely loyal to their place of choice.  Or maybe that’s what benedict means in Pittsburgh – I mean, clearly the people of Pittsburgh embrace excess, as evidenced by their love of Primanti sandwiches!  (I say that with love.)  But my tastes run to the let’s-not-eat-until-I-can’t-breathe – not anymore, anyway – so this plate was left only half finished.  BF was a bit surprised, as I tend to gorge for breakfast and eat less throughout the day, but what can I say?  I just couldn’t stomach more mediocre food while on vacation.  No, thanks.

Yvo says: There were a LOT of yummy sounding offerings on the menu, and the prices were inexpensive – the above, plus a large orange juice and a coffee, with a very generous tip (our waitress was sweet, though busy), came to $30.  If I lived in Pittsburgh, I know I’d be back to keep trying more stuff and would eventually find a favorite to settle upon.  Just… not the benedict.  (Also, if you’re planning on going to Pittsburgh, on a Saturday morning, DeLuca’s is located within the several blocks long strip of stores and outdoor markets that have a lot of fun things to look at.  Vietnamese sandwiches, chocolates, homemade doggie treats, and – this really blew my mind and I wished we’d just walked around first instead of eating here – a homemade taqueria style place with these delicious and cheap tacos – the REAL kind!  I was really mad that I’d eaten too much of the above mediocre benedict and couldn’t get a banh mi or a taco or churros or… um, sorry, I should focus here.)
meh…