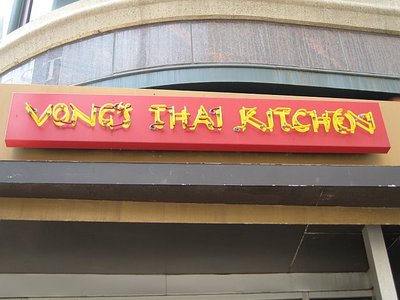 The place that basically stemmed our trip to Chicago: a long while ago, I’d seen on FoodNetwork an episode of… one of the shows that travels around and shows you cool things.  This place was on there, and was noted for having $1 desserts, bite sizes for after lunch, so you don’t feel grossly overstuffed afterwards.  This is a great idea.  I mean, think about it: you still get dessert, but you don’t want to throw up afterwards. 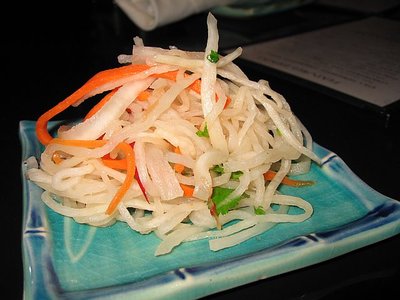 Location-wise, this restaurant was a block from our hotel, and only 2-3 blocks from Magnificent Mile, which is very close to most of the tourist attractions we did.  It’s more in a business district part of Chicago, but definitely walkable from many of the tourist areas.

Unfortunately, because of scheduling conflicts, we had to eat our first brunch (at La Creperie) at 11:30, while our lunch reservations for VTK were at 1:30 pm.  We weren’t hungry yet at 1:30, so we opted to split three appetizers, an entree, and of course, as is our usual practice, dessert. 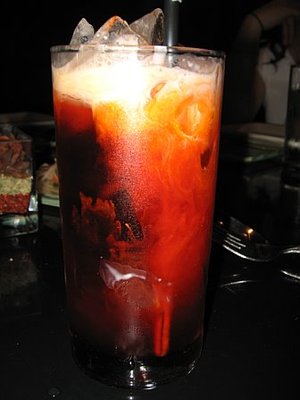 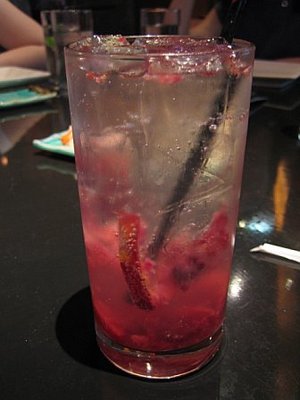 For appetizers, we opted for the VTK rocket roll (which was listed as a signature dish), fried calamari (from a specials menu), and chicken satay. 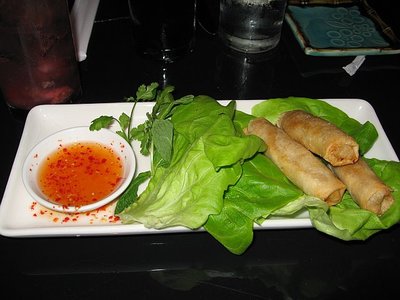 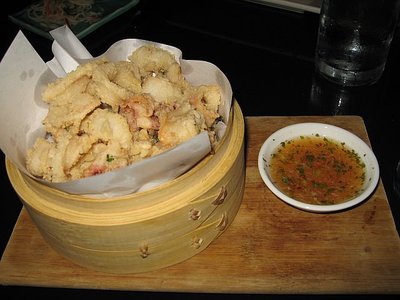 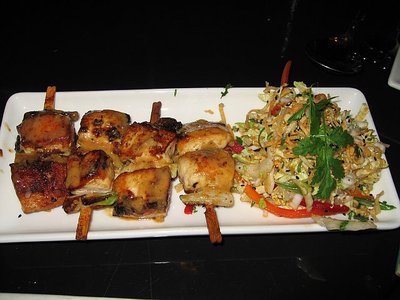 We were all disappointed to find that the “rocket roll” was just an ordinary spring roll, though it tasted fine, it was only standard.  I believe the other girls enjoyed the fried calamari, though I found it just “alright” (fried calamari is another dish that my boyfriend enjoys, and so I eat it at a lot of places- and not always good results!).  The chicken satay, while some of the other girls didn’t like this, I liked- despite normally not enjoying chicken in general.  The chicken was in one inch blocks, interestingly, but had been grilled with scallions, and I’m so in love with scallions lately, that may have skewed my opinion.  I wouldn’t say it was fantastic, but I did enjoy that one.

For our entree, we chose the standard [chicken] pad thai to split amongst the five of us. 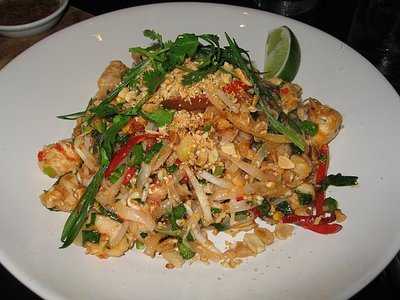 Pad thai and I have a love-hate relationship (see: review for Takrai Thai for explanation).  This pad thai wasn’t bad, it had enough noodles, enough stuff, but it was spicy.  I don’t really eat spicy things.  It wasn’t “crying, sweat pouring, I’m going to kill myself because I can’t eat it” spicy, but it was spicy enough that I didn’t eat that much of it.  Although one of my girlfriends, who also does not eat spicy things, enjoyed it and ate most of it, actually (haha sorry but I won’t reveal who you are, ok?), the spiciness annoyed me because I felt that if I wanted it spicy, I should be able to add my own hot sauce or pepper flakes, and not just have someone else decide for me that it’d be spicy, particularly a dish that isn’t normally spicy.  My girlfriends expressed surprise that a Thai place that catered to non-Asians would make their pad thai spicy (pad thai being a fairly “normal” dish- something many non-Asians would order), and not even note this on the menu.  But like I said- it wasn’t so spicy that the dish was just ruined for me.

Now, for dessert!  Oh, dessert, the real reason we came here.  Our waiter presented us with a tray that had “display purposes only” desserts on it, and we chose to get nearly everything (except the ginger cookies). 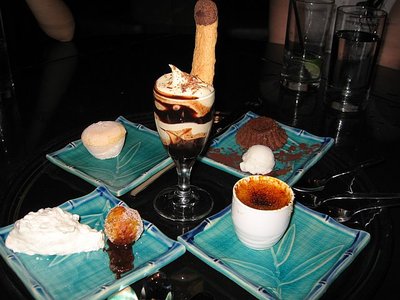 The above picture is our actual order… from top left; mango mochi; Valrhona molten cake; ginger creme brulee; chocolate filled warm beignet with coconut cream on the side, and center is a mascarpone/espresso tiramisu-esque dessert whose exact name I’ve forgotten (despite that being my choice).

Since mango mochi is something I can get at the local HKS (Hong Kong Supermarket), this was as was expected (and at $3.50 a box of 6, completely overpriced).  The Valrhona molten cake was a disappointment; not enough molten center, probably because it was so small.  It was bitter enough, which most of the girls prefer over sweetsweet chocolate, but just not molten.

Creme brulee is something I don’t particularly care for, though I eat it (again, a dish my boyfriend seeks high and low for the perfect one, so I’ve tried it at a lot of places).  Ginger, I outright despise (Mary Ann, however, is okay) (that’s a joke).  As far as creme brulee goes, this one was okay, though the serving dish is a bit deep; it had way too much ginger infused throughout for me to take more than a teeny spoonful.  However, one of my girlfriends who loves ginger and really likes creme brulee really liked this dessert quite a bit.  She gave it high marks.

Beignets are basically zeppoles, Chinese donuts, donuts, what have you, only better (Cafe du Monde in New Orleans- to die for beignets, seriously).  It’s a ball of fried dough.  I’ve never had a filled beignet (pronounced bin-yay), though, and this was pretty damn yummy, though tiny.  I’d be really interested in trying a dark chocolate filled regular size beignet… yummy.  Yes, it was filled with dark chocolate, which is another bonus point in my book.  Mm, mm, good!

I’ve saved the best for last.  My personal favorite dessert is tiramisu.  I search high and low for the best tiramisu (so far, Veniero’s, but only in a cup/bowl, I hate that they put chocolate chips in their sliced tiramisu, ick!!! tiramisu is meant to be smooth and creamy!!!), so I was excited when this dessert presented itself.  It had layers of espresso, mascarpone [cheese- which is what’s always in tiramisu], and tiny rice balls- think Rice Krispies, but round, and tiny, and cocoa powder, along with a ladyfinger cookie sticking out of it.  I really loved this dessert.  The crunch of the rice balls complemented the smooth, creamy cheese, and the overall sweetness wasn’t overwhelming but just right.  I wouldn’t classify it as a strict tiramisu, nor would it take over my favorite so far at Veniero’s, but it was definitely something I would not hesitate to order again. 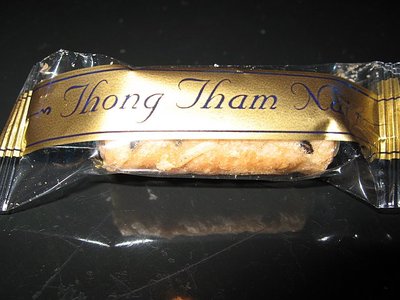 When we were done with the dessert tray, the waiter brought by our check with Thai fortune cookies.  These reminded me of those “egg rolls” that my parents used to buy when I was a kid- the sweet kind that were in those square tins, and about the size of a cigar, they’re so crumbly, slightly sweet, and good.  Rolled up inside was a parchment scroll with a range of fortunes on it- we each got fortunes varying from really stupid, corny, to some really sweet ones.  Mine said, “To the world, you are one person; to one person, you are the world.”

Yvo says: Overall, a good experience; I recommend it for lunch (the $1 desserts are only available for lunch).  The food wasn’t bad, though next time I would know not to order the VTK rocket roll, and perhaps to ask for non-spicy pad thai or I’d try another dish.  I would go back if I lived in Chicago (I’ve been informed the VTK in NYC – yes, there’s a VTK in NYC, and I went to Chicago to try that one- is expensive, and it does not feature $1 desserts for lunch).  If nothing else, at least have dessert there- at $1 each, you can order the whole menu, and enjoy the ambiance and “trendy” decor.