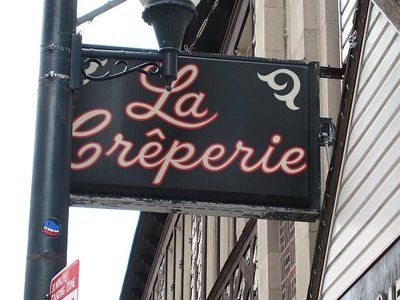 Our first restaurant in Chicago was La Creperie for brunch.  We’d read good things about this place, and a few of us really like crepes (like, a lot) while the minority hates them.  We were all still game, though.

Although we arrived a few minutes before their 11 am opening time, they still led us in and seated us.  The place was reminiscent of a cafe in France that I’d never been to- in fact, I’ve never been to France- but I definitely got a feeling of being transported to another country.  The atmosphere was casual, nice, and not too loud (well, we were the first patrons- although literally 2 minutes after we were seated, more people began arriving: a good sign)- we were easily able to hear each other, though the table wasn’t quite laid out where I could talk to everyone at the table. 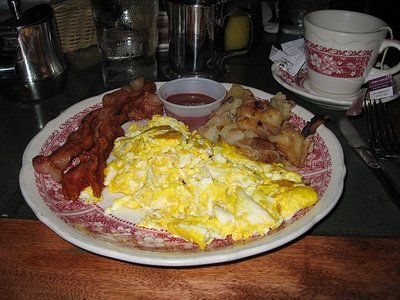 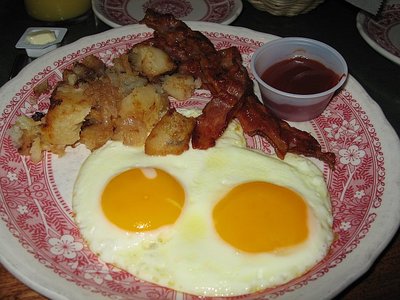 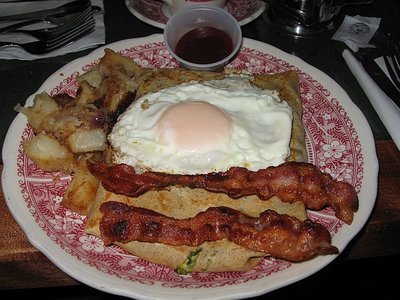 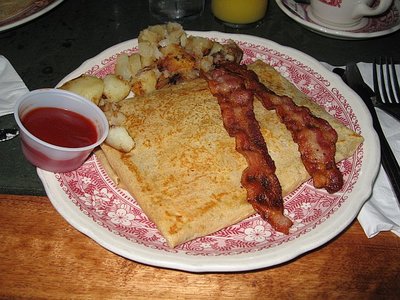 The two non-crepe eaters (myself being one of them) ordered the top two dishes.  I have to say, at first I was like, there’s not much to review here, they’re eggs and I generally can’t tell fresh eggs from not-so-fresh eggs.  But as I was eating, I realized that my sunny side up eggs- yes, it sounds easy to make and they’re not exactly hard to make, but really easy to screw up- were cooked absolutely perfectly.  The yolk was perfectly raw, the way it should be, and yet, the white was completely cooked through.  Not even a touch bit slimy.  They clearly cooked them with butter, because I tasted it in the egg, and they were good.

The other non-crepe eater didn’t remark on her dish one way or the other, so I’m guessing it was suitable.

The two people who ordered crepe florentine enjoyed their dish, though it was really filling- it was bursting with spinach and cheese inside.  One of the girls noted that she prefers crepes with a crispy edge, which these did not have.

The crepe complete contained ham, eggs, and swiss cheese.  The girl who ordered this said it was okay, but too much cheese (I didn’t take a good look at her dish, but she also does not like cheese generally).

Overall, while we were pleased with decor, ambiance, and service (friendly, and not over-attentive nor rushed), the food was okay, nothing outstanding.  Perhaps if it were in my neighborhood, or even in NYC, I’d wander in every once in a while to enjoy some really cool ambiance and perfectly cooked eggs, but since it’s in Chicago, clearly I can’t do that.  The prices weren’t bad, I think I spent about $10 including orange juice.

Yvo says: If you’re in Chicago, and crave crepes, this should do ya.  It’s not too expensive, their menu has a fair number of crepes on it, and the place is nice and clean inside.  You can also choose to sit in the outdoor area in the back.  Overall, I’d recommend it (not strongly) if someone asked me where to get crepes in Chicago.