Porta is another local gem that I’ve visited more times than I can remember but have yet to share here. It isn’t because I’m selfish (this time). I just assume everyone already knows how awesome it is, but time and again articles come out about “the greatest pizza in NYC isn’t in NYC” (this title is idiotic beyond description) and then mention an overhyped place a few blocks from Porta.

{Side note: I know people will ask. Yes, I’ve visited the other place. The pizza was sufficiently tasty but NOT amazing and definitely not worthy of the accolades that get heaped on them. The lines, the attitude, the mediocre service — shrug. My negative opinion won’t put them out of business and the lines will remain what they are, so I feel totally comfortable sharing that I will never return. Why? The pizza was just fine but the manager and bartender both hitting on my husband while my pregnant self sat next to him was really completely unacceptable, and service is always the make-or-break when it comes to a restaurant whose food is middling.} 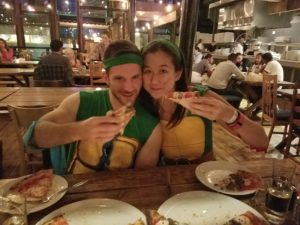 My very first visit to Porta was late night after an LSC: After Dark Halloween party. Oh, did I not mention – they have adult after-hours parties at Liberty Science Center once a month! Super fun but definitely something for pre-baby days or when I’m able to get a sitter for baby. Hubby and I dressed as Teenage Mutant Ninja Turtles (we were a party of 4), so of course we needed to get pizza after the party!

{This picture was included solely to show that I’m a lot of fun!} 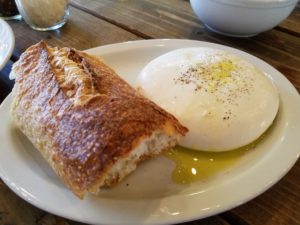 Porta has this housemade mozzarella appetizer that just demonstrates how much attention they pay to what they put on the menu. Every time I’ve ordered this, it’s been well-received by everyone at the table, fighting for the last bits. You’d think something as simple as mozzarella couldn’t be that great, but the lush texture and the lovely bounce to the cheese is just awesome. They use this on a lot of their pies, which makes total sense. Also, it’s a huge portion for $10 so great to share with others (or order a side of meatballs and make little meatballs sandwiches while you wait for the main event – the pizza).

I can’t lie though- sometimes I wonder why they don’t go another little bit and make their own burrata to put on the menu. I’d be there even more frequently if they did… 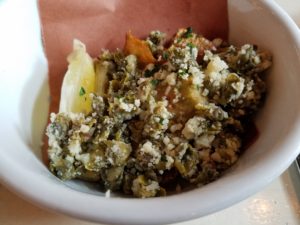 The fried artichoke appetizer is one of only two dishes I haven’t loved at Porta. It was a little soggy, and not that interesting taste-wise. Hubby and I both love artichokes too. At this writing, however, it’s not on any of their Summer 2018 menus (brunch, lunch OR dinner), perhaps due to season. 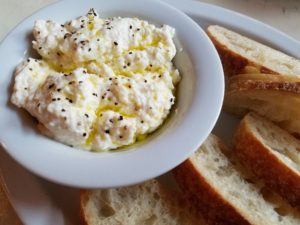 Their housemade ricotta is another delight; drizzled liberally with fruity olive oil and sprinkled with fresh-ground black pepper, spread onto the sliced bread… so delicious. I could make a meal out of just this and a side of meatballs! I tend to save room for the pizza though. 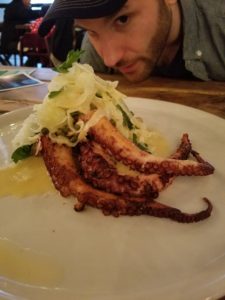 We also tried the octopus – we both liked it but agreed that we may not return to it because we like other things so much here! But I was glad we tried it; expertly cooked and with a lovely mix of flavors with strips of fennel, garlic, capers, lemon… it was very tasty! 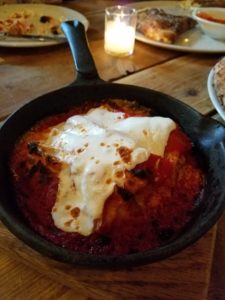 … and a random time I decided to try the lasagna, which was really good though heavy. 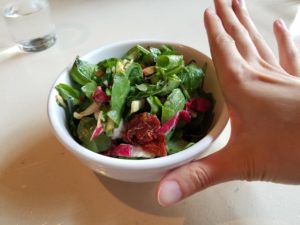 If you go for lunch, there’s a $10 lunch special that consists of your choice of salad and pasta. The bowl of salad (I’ve tried both, but I can’t tell you which is in the pic nor which to get – it depends on your personal tastes) is not a small one, though it may look small in the pic! 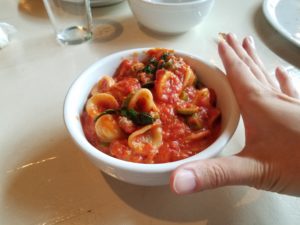 … and the pasta. There’s a veg option {spaghetti pomodoro} which I’ve never tried, though others have told me is good – this is the bootzin, which I find so yummy I’ve gone back and ordered for dinner a regular portion. It’s orecchiette with sausage, cherry peppers, and olives, all of which combine to make for a complex marriage of flavors. The pasta is cooked al dente with quite a hefty chew to it, while the olives are little pops of salt and the peppers chime in with a touch of heat. I really enjoy this pasta dish and am often surprised to hear other people tell me they’ve never had any of the pasta dishes at Porta. They are quite the hidden gem here. 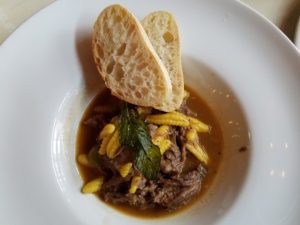 This is the other dish I ordered on a whim one day that just didn’t do it for me, though — I believe it was a special so not even on the menu anymore. I won’t bother describing it, I just wanted to share this picture because I like it. 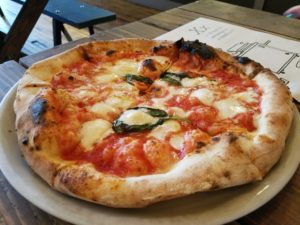 As for the pizza – well, here’s the margherita pie. In the background you can see a coloring page they brought us for my friend’s son. This is neopolitan style, the fluffy quick-fired crust is airy and chewy all at the same time. I find their pizza quite excellent for this style. 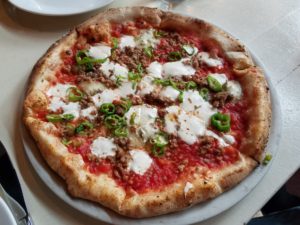 I’m pretty sure this is the Italian Stallion, aka the pizza we order every other time we visit. It’s not super spicy, but another great mix of flavors that works for Hubby and my palate. Gorgonzola, Italian long-hots, and housemade Italian sausage add to the usual suspects on top of the pie. 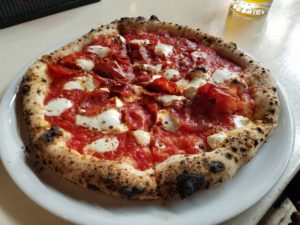 The 14 and 1/2 is the pie we order every other time we visit. Hot soppressata and Calabrian chilies give this one a bit of a zing and make Hubby happier than it makes me, but still a very good pie. 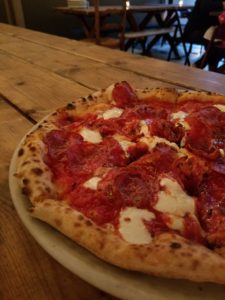 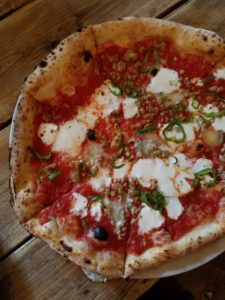 This looks like another shot of the Italian Stallion. 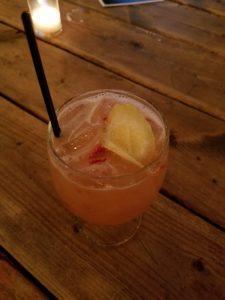 As for the drinks, I love that the cocktail menu is frequently changing and have sampled many of their drinks. Some are great, some are good, but as with many things – it’s all down to your preferences. I like having the option of a cocktail with my lunch.

And… coincidentally enough, before this post was set to publish, we visited for brunch and discovered they have a whole different brunch menu that I don’t believe we’d ever seen! 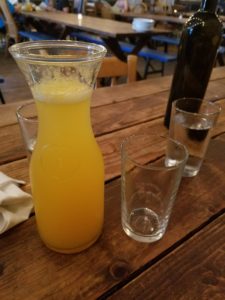 A carafe of mimosa was $10 and I couldn’t pass it up. For $10 I was pretty pleased! It was not a small thing and the drinks there usually range much higher for just one, so this was a solid deal. Orange juice and pizza might not be ideal though. 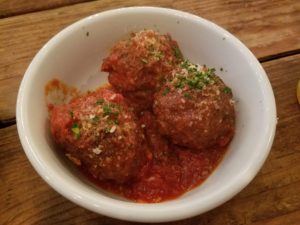 And the meatballs, which I’d had in the past but couldn’t find a picture for some reason, were a hit with the baby – they brought these immediately despite ordering them after we ordered the pizzas (baby was asleep when we sat down, but woke up soon after and I wanted her to eat something). The baby ate almost an entire meatball immediately (once it cooled and I cut it into slightly smaller pieces for her). That’s faster than she eats my meatballs! 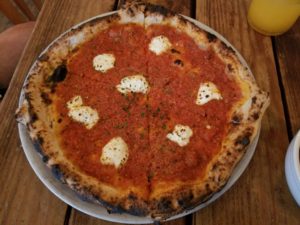 For the sake of the blog!! and this post, I ordered two new-to-us pizzas. First up: Love & Mercy, which boasted a ton of meats in the sauce on top. This one was very herbaceous but Hubby thought lacked enough salt. 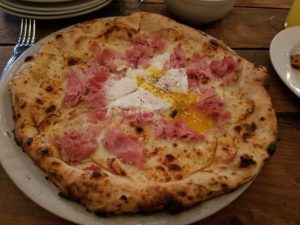 And this one, the Open Sesame, he found a bit too salty. Prosciutto cotto and a roasted egg on top made it a fun pizza, and while I liked this one better than the Love & Mercy, I think we’ll be sticking to our Italian Stallion and 14 and 1/2 in the future. It was great to try Porta for brunch though — and I almost wish we’d strayed from pizzas entirely, as they had a bunch of very fun dishes that were more geared towards brunch — but another great experience with fantastic service.

{the new section of family-friendly ratings!}

Stroller-friendly? YES. There’s a front and back entrance; the back entrance on Columbus has a short flight of stairs but the entrance on Newark Ave. you can roll right in. The doors are huge so you can easily push a double stroller in if that’s what you have. There’s space up front to park your stroller if you so choose (I see people do this a lot), but there’s also space in the back next to tables if you want to bring the stroller with you, which we frequently do when she’s asleep in the stroller. The hostess has never given me attitude for having a stroller with me — usually it’s lots of ‘awww’.

High chairs? They have high chairs for when you sit at a regular table, but do not have the high chairs that reach bar tables (not a lot of places have these though) — the bar tables are in the front only, and gets pretty crowded during certain times so you’d unlikely sit there with a child anyway.

Overall family friendly rating? Very. The staff is super friendly and accommodating. You can also sit outside – the strollers will fit next to the table and they will bring you a high chair if you need/want one, and the outdoor seating area faces the pedestrian plaza on Newark, affording you some fun people-watching and safety inasmuch as no cars drive down that strip. I’ve never had a bad server here — all have been kind and nice, with a lot of ‘awww’ for the babies. I once visited when I was late in my pregnancy, but the hostess only noticed I was pregnant as she was seating me at a table with bench seating. She immediately tried to offer us a different table or to bring a chair with a back for me, worrying that I wouldn’t be comfortable at the picnic-style-table. I declined but she was so sweet to offer and I thought that was just a nice touch. (Funny enough, my friend was also pregnant – though months behind me – and the hostess didn’t notice she was pregnant so didn’t ask her. It wasn’t malicious though, neither of us were showing very much.)

I can’t recommend Porta enough for both its food, family-friendliness, and overall excellence. They also do trivia nights and have a rooftop I’ve yet to check out, but it looks nice in pictures! I think late at night it turns more scene-y but I don’t know enough about that to comment.

« Autumn’s Picks
Back to School with Momtrends! »