I realize that Thanksgiving was November 27, and it’s been over 3 months since then, but I took the photos and made such a delicious meal that I really should share, right? Plus if you could make a turkey the way I make it, you’d want to make it more than once a year. Because it’s delicious and worthy of taking centerstage on your table at least 3x a year… if you have people you can feed. I mean, I’m pretty sure I still have turkey meat in my freezer. 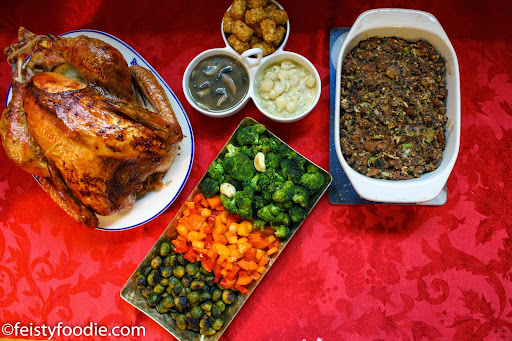 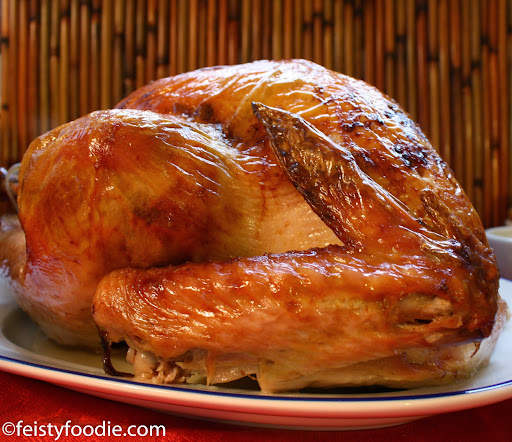 My gorgeous, juicy, roasted beauty… in all its glory. I don’t remember my brine recipe, don’t you hate me? But I never do, and make it up as I go – it’s a mixture of Alton Brown’s brines for his smoked turkey and his regular roasted turkey, and as the years go by, I keep tweaking it. Lots of garlic, a bunch of other aromatics, honey, and some other things. I use a digital thermometer to regulate it while it cooks. It never comes out overdone. Oh, and this was the first year I used a tinfoil/disposable roasting pan, and it actually didn’t do a terrible job whatsoever. At $5 for one, I will eventually invest in (or someone will buy me, haha) a real roasting pan with rack, but for now – this did just fine. I think it was Reynolds brand, and it had a metal carrying handle to help with the weight. Solid. 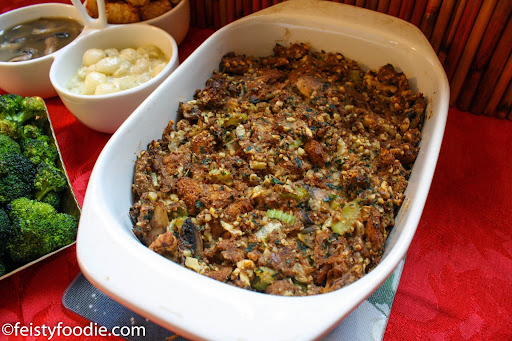 This year, I switched it up with my dressing (aka stuffing, except not stuffed inside a bird to cook). Instead of my usual Paula Deen-inspired country stuffing, I used a Martha Stewart walnut mushroom dressing recipe. I always have walnuts on hand in my freezer from working with the generous California Walnuts people, and I love mushrooms. No brainer! I enjoyed this a LOT during my meal – it was nutty and really tasty – but my normal MO of slicing it up and panfrying pieces to add to my sandwich or to top with an egg were a little skewed because this came out crumblier/not as cohesive as my other recipe. Maybe I added too many walnuts? I will have to play with this a bit — I don’t recall if I followed it as exactly to her specs, either, haha. Either way – still tasty. 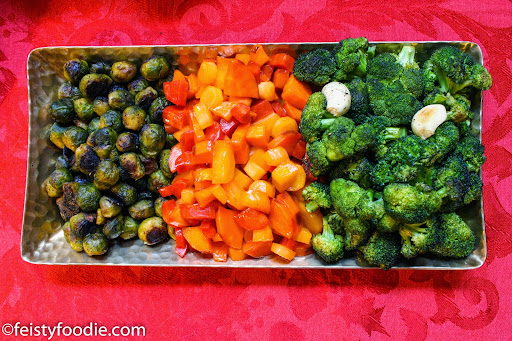 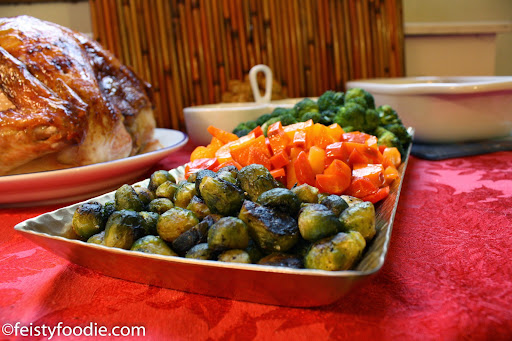 Now for my veggies! You know how I love my veggies, and especially a meal like this — I craft with an eye towards leftovers. First up: brussels sprouts. Since I knew I was doing a big meal, I decided to try out Trader Joe’s frozen ‘sprouts. They’re smaller – Belgian, I believe – and they didn’t roast quite as well as I’d like, a little too much moisture – but in a pinch, I would be fine with these. Not my first choice next time though!

The second item was a random… I had a big bunch of gorgeous heirloom carrots all colors, including white, but didn’t know what to do with them. I decided to glaze them using the orange juice leftover from making my homemade cranberry sauce (which I failed to photograph because I forgot to serve it, ha)… and when that didn’t seem like enough, I grabbed one of the bottles of Mexican Fanta (yes, my local bodega sells it!) and added some of that. Real sugar orange soda and orange juice made a really delicious glaze for these carrots – the white ones absorbed some of the orange color, but still beautiful, right? Really tasty too — I added salt, just to get a bit more balance in the taste.

Last but not least: roasted broccoli. I’m a fan of Amateur Gourmet’s best broccoli ever recipe, though I’ve strayed from his through the years, but that’s where I started. I tend to drop a couple of garlic cloves in with the broccoli, and roast it until it’s still pretty crisp but the floret tops get charred… and it’s GLORIOUS. 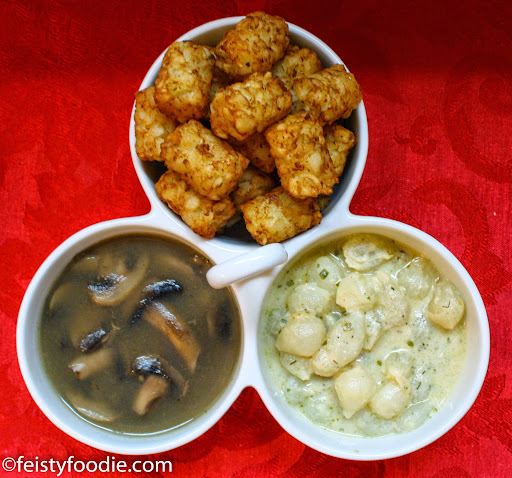 This dish caused much excitement amongst my twitter/instagram/facebook followers… to the tune of “omg why have I never thought to do tater tots instead of mashed potatoes?!?!” Well, for a few reasons. Tater tots are highly underrated in my opinion. I don’t know why. Bite sized hash browns… yes?!?!?!? But another reason is… my plate was incomplete without mashed potatoes to drown in my delicious brown mushroom gravy. I craved mashed potatoes. So while the tots were great, my plate was missing mashed.

The gravy is the same gravy recipe from Paula Deen’s country dressing – it’s just the gizzards/innards with butter, flour, and browned mushrooms… and lots of poultry seasoning, etc. I drink this stuff by the cupful, it’s so good. I LOVE IT.

The “creamed” pearl onions were horrible and I will not be making those again, so I’m not going to share. Horrible. I tossed them, didn’t even try to re-make them into something else. *shudder* 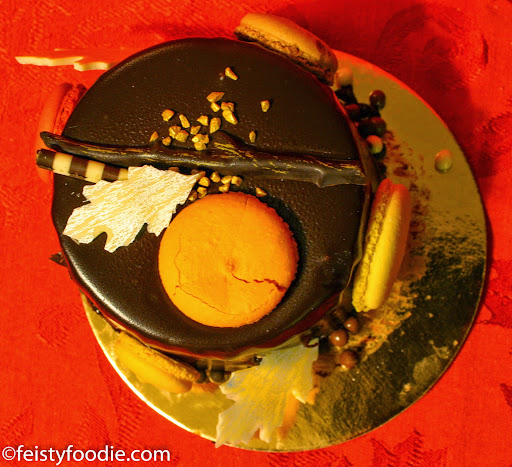 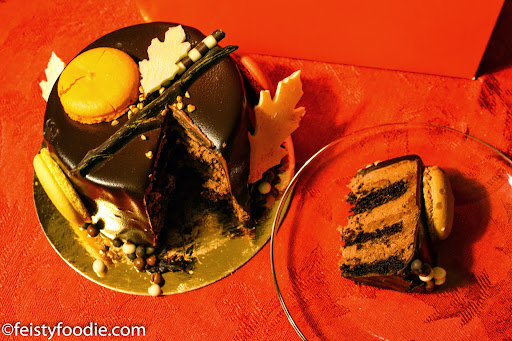 Because I knew I would be cooking all day and not want to attempt a dessert, I bought mine. Chococlate ganache cake from Pomme Palais, which was very mousse-filled. While delicious, I wished there was just a little more cake part to balance out the creamy sweetness of the mousse. Ah well.

Another very successful Thanksgiving feast cooked by me, eaten by me, shared with no one 🙂

How did you spend your Thanksgiving? Am I the only one who looks forward to making my own turkey every year? Yes? Okay then 😉