Here in NYC, summer has suddenly decided to arrive. I mean last week it was rainy and downright COLD, and this morning my walk to the farmer’s market resulted in me drenched in sweat. What the what? When the farmer’s market stalls are overflowing with gorgeous produce, and it’s too hot to really want to think, what do you do?

Eat salad of course! Okay, in hindsight, the recipe I chose actually does involve some real cooking – if you consider boiling a little water for blanching the asparagus and cooking the pasta real cooking – but it’s so delicious, it’s totally worth it.

California Walnuts is hosting a #VirtualSaladParty to encourage us all to eat more walnuts – which contain a ton of healthy Omega-3s and fatty acids that are good for you. I chose a recipe from Mollie Katzen called “spring pasta salad with cilantro walnut pesto” – with my own tweaks! 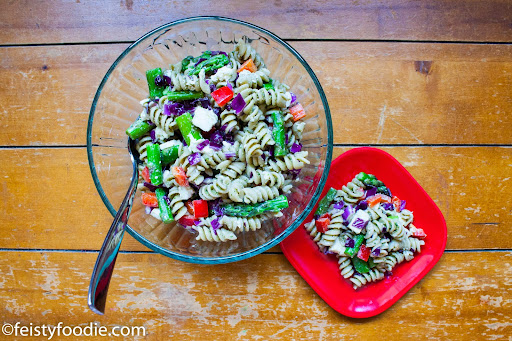 Isn’t that pretty? I really love colorful, pretty salads – they make me smile, and I feel are generally well-rounded in their nutrients. I don’t know if that’s scientific. But it sounds nice.

The original recipe calls for snow peas, but as asparagus season is upon us in NYC – and EVERYWHERE at the farmer’s market! – I felt it more appropriate. Plus, with our extremely abbreviated spring, I haven’t quite gotten my fill of asparagus yet. A quick blanch in the pasta pot before I cooked the pasta was all it took (I cut them into 1″ pieces before blanching, to be about the same length as the rotini I cooked). I also added diced (raw) purple cabbage because of the color, because of the crunch, and because I really like the slightly bitter taste it imparts to things.

With regard to the walnut cilantro pesto, however… I made some rather large changes. Or maybe not, since I really only added one thing. As I don’t currently have the cookbook to reference yet, I’m not sure if the pesto was intended only for this specific recipe, but even so… well, here’s the original ingredient list (you basically zip it through a food processor; if you’ve ever made pesto of any sort, you are familiar with the process!).

Walnuts are super rich and oily on their own, part of what makes them so lovely and suited for a recipe like this. I’m not sure why she only wanted us to use a ‘scant’ 1/2 teaspoon of salt; with any sauce I’m making that is intended to be mixed with other things – especially a pasta salad like so – I add way more salt because it will mellow out once it becomes one with the pasta, so to speak. You want it to POP – you want to be able to taste it amongst the rest of the flavors happening.

But an even more egregious omission, I felt, was the lack of acidity. I posted briefly about this on Facebook, and many people piped up to say that the addition of acidity isn’t traditional in a pesto. Okay, fine, but neither are walnuts or cilantro. And the fact is: first that walnuts are so rich and oily… that you need some balance to the recipe. You need that acidity to cut through the richness, to add to cilantro’s brightness and elevate it. You need that little zip! I don’t think Ms. Katzen fails to notice this, either, as one of the steps in the overall recipe for the pasta salad asks that we splash 1 teaspoon of red wine vinegar over the pasta when we toss it with the pesto. I think that little bit of acidity makes a huge difference in the overall dish, too. I added the juice of half a lemon to the pesto itself and was much more pleased with the result than prior to that; I tasted it both ways and really, the lemon made sense.

I also added way more garlic than she requested, but that’s personal preference. I don’t mind smelling like an anti-vampire device. 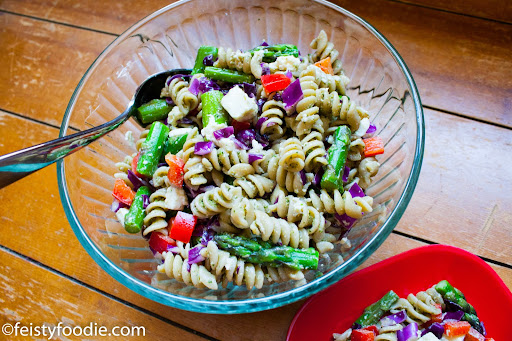 We were asked to share our opinions of the recipe, and I’m never shy about sharing that. Overall, the end result was lovely, and quite tasty – and still felt light, even though it has cheese in it (which I almost omitted but it actually is a vital part of the recipe). I would definitely make it again. My main suggestions are listed above, with one more: the recipe is for an entire dish, which I understand. But it would be helpful, I feel, if the cilantro walnut pesto recipe were more complete on its own – not just the acidity added, but I followed her measurements for the pesto and found the oil content way too low to resemble a pesto – a slightly loose ‘sauce’ that swallows a spoon easily. This was way thicker once refrigerated, but melted easily into the hot pasta when I tossed it together. Her original recipe calls for you to then add more oil to the pasta.

In any case, I enjoyed the dish and it is featured in my lunches for this week (alongside salmon, my favorite protein to pair with walnuts. Tons of Omega-3s in both!).

Here is the recipe, with my tweaks. Original can be found here.

Directions
For the Pasta:

For the Cilantro-Walnut Pesto (Makes 1/2 cup):

This makes a great make-ahead meal, lunches, a picnic side (though I might omit the cheese if I was going to leave it on a picnic table for a few hours – or use packaged mozzarella as I find that tends to deteriorate more slowly in heat), or dish for a potluck. It’s vegetarian-friendly, and easily adaptable for vegans. A great dish that I’m happy to now have in my arsenal! and the leftover pesto makes a GREAT sandwich spread. So good!! (I was dipping fries in it though… hehehe)

Now for the giveaway! I am giving away a copy of Mollie Katzen’s cookbook! As I don’t have it in my hands yet, I don’t know which one it is – but I’m told the most recent one. It might even be signed by her, ooh! To enter, all you have to do is leave a comment below telling me why you want to win the cookbook. Winner will be chosen at random using random.org a week from today, June 16, at 12 noon EST.

I did not receive monetary compensation for this post, though I will receive a copy of the same cookbook, and walnuts as well. Opinions expressed herein are very obviously my own! Contest is open to anyone who wants to enter whose mailing address is within the 48 contiguous states OR who can/will pick the book up from me in NYC/SF.