I have a very strange relationship with kiwi, the fruit.

As many of you know, my dog is named Keywee – which is pronounced “kiwi” (which I guess some of you may not have known, but I ask how else would you pronounce that?!). She is the light and love of my life, and I occasionally grace photos of her upon y’all. 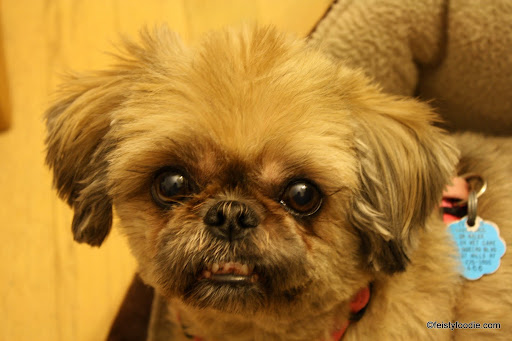 Like this one. Look at that face! That underbite! That look of “Mommy, why are you taking a photo of me? I just want a treat. Wah.”

I’ve heard the question, “but she’s not green, why is she named kiwi?” more times than I care to count. I’ve perfected the pointed stare, with the long, slow, drawn out response: “Well, she’s brown and furry…”

And I like to say I stopped eating kiwi when I named her Keywee. Because that’s just weird, isn’t it? (Although I named my other dog – of whom I lost custody a while ago – “Sandwich” and I surely did not stop eating sandwiches, though we called him Sammy more than Sandwich, so…)

The truth is, my experience eating kiwi was limited solely to those fruit-and-cream cakes from Chinese bakeries. You know the kind…

The photo I randomly chose doesn’t have this, but growing up, I really liked those maraschino cherries that were often atop the cakes as well. I’m not entirely sure why my parents felt the need to insist that if I wanted to eat the cherries, I had to eat the kiwi slices as well – it’s not like I had a fruit or vegetable deficient diet, I loved and continue to love both – but occasionally my mom would insist I eat the slice of kiwi as well.

And the darn things were always too tart for me. Not sweet. Just something about them my made my tongue curl up and unhappy, so I avoided eating kiwi for the longest time. I’ve tried it again here and there but never really cared for it…

until now. All this prelude to explain that I was invited to an event this past Tuesday evening, and though I was initially wary of eating tart fruit that would make my tongue unhappy, I had my mind blown. (To be fair, I eat plenty of tart things – I love grapefruit, passion fruit, and citrus of all types – so I am not entirely sure why kiwi doesn’t sit well with me!) I tried kiwi straight up and was absolutely floored by how smooth, sweet and creamy the flesh was. 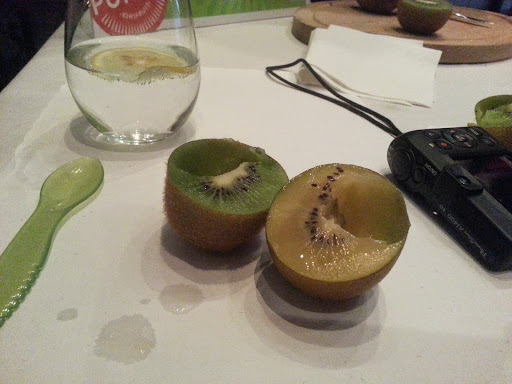 We sampled both Zespri organic green (left) and Zespri sungold (right). They taste completely different! The organic green was my favorite; as I mentioned, it was smooth, creamy and… sweet. Really delicious. The sungold was more tangy, but not tart; the difference was about the difference from green apples to red apples. Similar but when you taste them side by side, very distinct. 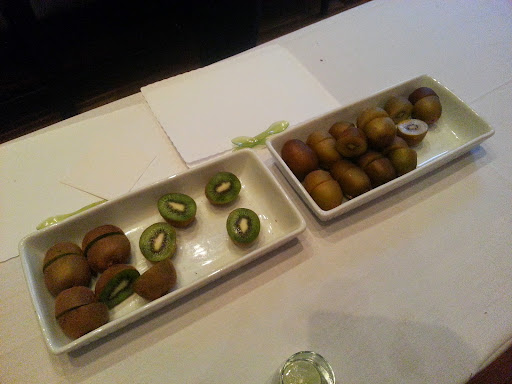 I really wanted to trip the whole platter into my bag… so good! Plus, I’m lazy, and these were already cut for me. Did you know you don’t have to peel kiwi? You can just cut them in half and scoop. OMG, so good.

We were treated to a wide variety of items to showcase ways to get more kiwi into your diet, but this was the crowd favorite: BLKs! Instead of – yes, instead of! – tomatoes in your BLT, use KIWI! The slightly firm, very juicy, slightly sweet kiwi is actually a great foil to the salty bacon. It’s similar to tomatoes in terms of texture, but adds this extra boost of sweetness that really kicks it up and brings it to a new level. Totally delicious.

Of course they didn’t send us home empty handed; we got these cool re-usable eco-bags, complete with a nifty lunch box (affiliate link) that had two kiwis in it! YUM!!! (I ate them as soon as I got home, hehe.) I will definitely be keeping an eye out for the extra delicious Zespri kiwi – found at Trader Joe’s, Whole Foods, and, surprisingly, Asian markets around the city (for sure H-Mart has them). Worth the price… I will be adding kiwi to my diet on a regular basis now!

How do you eat your kiwi? Any suggestions for how to incorporate more kiwi into your diet – or shall I just keep cutting them in half and eating them straight? 😉

Please note that I attended this event courtesy of the PR. I was compensated monetarily for my time and my post, though opinions, as always, remain my own.