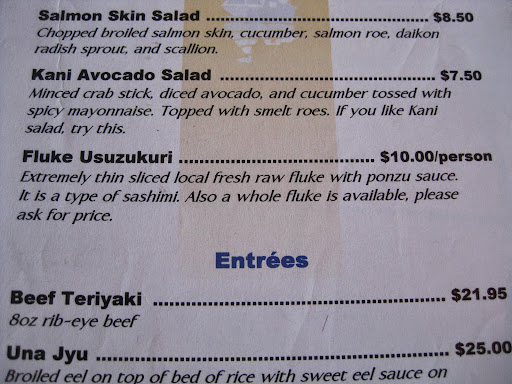 I actually go to Sushi Yasu fairly frequently, but I usually get the same things so I don’t post about it every time – just photos on Instagram every once in a while. In any case, I recently popped in for a bite and saw a new item (fluke usuzukuri) on the menu, so I decided to try it. 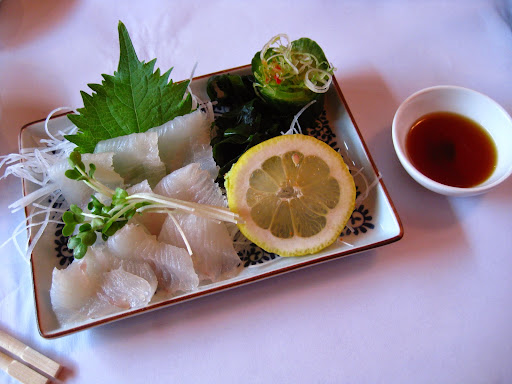 They had a kitchen back-up that day, so the food took a while – which they warned us of ahead of time, and we were both fine with it. Despite that, they also brought us some edamame on the house to apologize for the wait. This may be because they recognized BFF and I – we both go there regularly, with and without each other – because the table next to us had a guy who was kind of like “I would like something free too” – but they didn’t wait as long as we did, either. Anyway, the fish in my dish was extremely fresh. Unfortunately the local fish they describe – I believe that when it’s at its freshest, there’s little to no discernible taste. I enjoyed my dish, but doubt I’ll order it again – it was just fine, and didn’t make me roll my eyes back in my head and say “MMMMMM” the way their Marilyn Mon-roll does.

I also got a Yellowstone roll – which I get fairly frequently as well. Fried fish in a sushi roll with a bit of slightly spicy special sauce dolloped on top; I like how crunchy the fish remains, while the rice is vinegary and the sauce adds a little heat and creaminess to the roll. It’s a good sushi roll and is only $6.

Sushi Yasu continues to serve up sushi that I enjoy. I know some people I’ve recommended this place to haven’t enjoyed the inconsistent service and sometimes aren’t impressed by the fish, but I have yet to have a problem with the quality of the food. The service is definitely inconsistent but has improved drastically since they first moved to the new space, and they seem to be mostly through their growing pains. I’m happy to have this place in my neighborhood.