I had such a great time at the last Macy’s Culinary Council event I attended that I leapt at the opportunity to attend and cover another one for Everywhere.

This time, it was the grand finale of the 2nd Annual Sizzle Showdown – home grillers from around the country competing for a $10,000 grand prize along with a trip to return to NYC next year to watch the Macy’s fireworks.

I got there early and sat in the front row, directly under the hot, beating sun – this was just Saturday – and watched them set up. They didn’t start until a good 40 minutes later – about 30 minutes late. 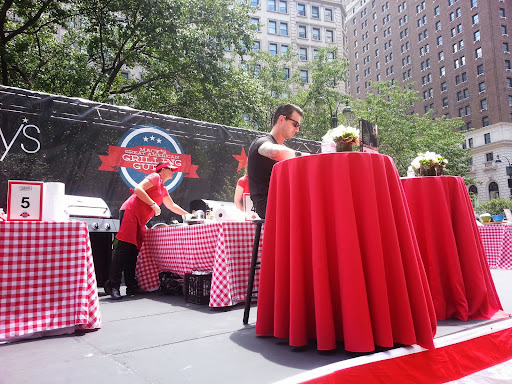 Our celebrity chef judges – sorry, it was hard to get a good picture while sitting when they were on a raised stage – Johnny Iuzzini and Todd English. Not sure how either of them are “barbecue experts” per se, but I’m sure they know good food when they eat it.

It was really hot and uncomfortable, but our emcee gamely trooped through, peering at the dishes being made, asking us trivia, and just joking around with the audience. At one point she asked “How many tattoos does Johnny have?” and he responded, “If anyone knows the answer, I’m in trouble!” 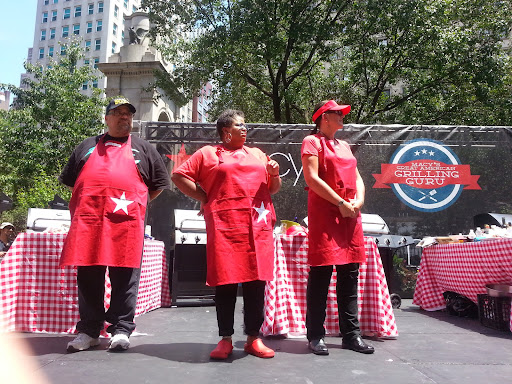 There must have been a disconnect or miscommunication; though all literature promoting the event said attendees would receive samples of the contestant’s entries, we received nothing. Above is a photo of contestant #s 4, 5 and 6 waiting to hear who won. 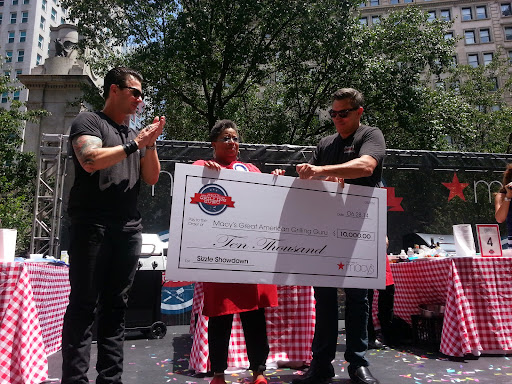 As expected, contestant #5 – Sherri – took home the big prize. I say as expected because one of the first things Todd said to her while he was observing her making her dish was “galangal! where did you learn to use this?!” – a predominantly South East Asian root much like ginger, and he has a strong affinity for south east Asia and its flavors/tastes. She also grilled rice noodles, which both Todd and Johnny were intrigued by; she won on flavor profile and creativity almost alone – I can’t speak to taste, as we didn’t get to sample any of it. 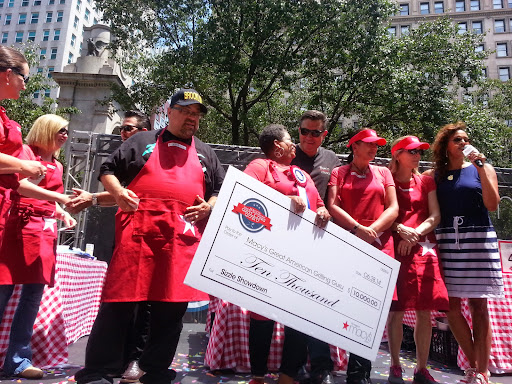 I was actually very happy for her; based on what I was seeing, she went out on a limb and really flexed some creativity while others chose to use very ‘safe’ meats like chicken and various other items that didn’t seem to be too interesting. If she hadn’t won, though, I would put money on the lone man being the winner – his teriyaki short ribs looked quite delicious and made my stomach grumble very loudly.

At the end of the event, they gave everyone tickets to redeem for gelato in the basement of Macy’s behind us. Pretty smart – get us in the door and get us in the housewares section!

While I was pleased with the winner, overall, the event had some logistical and organizational issues that left a bad taste in my mouth that the strawberry gelato did not cleanse. Having us sit outdoors for nearly 2 hours in the blazing sun – even providing us with paper fans, which did little to battle the sunburn I now sport – without any warning seems a bit irresponsible. I don’t hold this against the Culinary Council; they are doing a good job with their mission statement and I’m happy for their successes on that front. It may have been prudent to construct a shade over the seating area, or distribute hats along with the paper fans.

Regardless… you should definitely keep up with Macy’s Culinary Council here to see what other fun events are upcoming that you may want to attend!

I am a member of the Everywhere Society and Everywhere has provided me with compensation for this post. However, all thoughts and opinions expressed herein are my own.