This weekend is 4th of July – a huge barbecue weekend! Well, a while ago now, Eric and I randomly decided to grab dinner after work one Friday and found ourselves at Mighty Quinn’s. I’ve heard lots of good things about them, but the lines at Smorgasburg were always ridiculous and the storefront always looked empty. It looked empty this night, too, though the line was out the back door (and hard to see from the front), but we got there at just the right time. 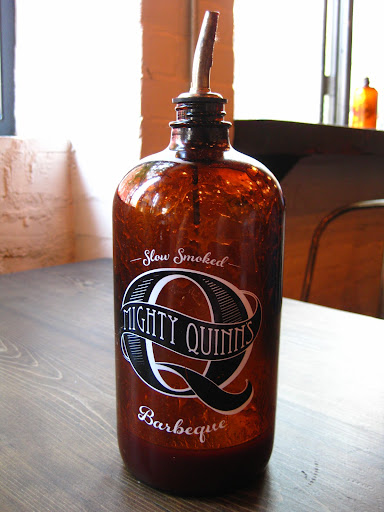 The house barbecue sauce was pretty tasty – smoky, not overly sweet, and not spiced to the point that all you taste is a blur on your tongue. 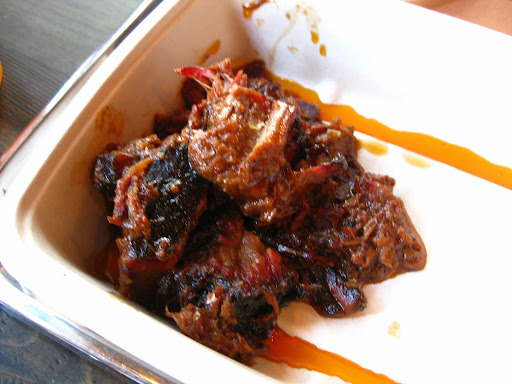 We split a small portion of burnt ends. Well, supposedly: because I don’t know WHAT these are, but they sure as sh!t aren’t burnt ends. This is garbage. This is mushy, soft, and just… WTF? Burnt ends should have crisp edges, be smoky, charred, and melt like meat candy in your mouth. This was just a pile of shreds of meat. Eric had kindly got on line and done the ordering for us, while I sat and held our table, so I didn’t want to be rude and ask him if he was sure they gave him the right thing, but it surely looked and tasted like they gave him chopped beef by accident. Reigning in my vitriol at receiving this – just a little bit – the taste was lovely, the flavor was good, and the meat was super tender.

But these are not effing burnt ends, and don’t try to tell me otherwise. Don’t charge me more for this crap you pulled off your knife slicing the burns ends, which should hold their shape and be individual pieces. Just don’t. You’re embarrassing both of us. 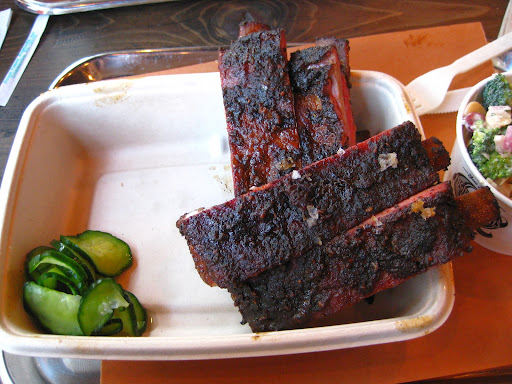 We both opted for our own ribs; I found the ribs incredibly satisfying. Smoky, meaty, tender but not too soft – when people rave about “fall off the bone” ribs, I shrug it off as something I don’t like. When rib meat is that soft, I think it doesn’t taste like ribs, it’s baby mush. I want my ribs to have that satisfyingly meaty chew – you hold the bone in your hand, and you tear the meat off with your teeth! Caveman style! Don’t get me wrong; I don’t want tough, dry, chewy meat. But I want it to taste like ribs: you bite it, you know this was once part of a living animal that is now dead and spent hours in the smoker, absorbing that delicious rub and smoke and just awesomeness. The one “gripe” I have – and it isn’t even a real gripe, because some people like dry rub, some people like it saucy – well, I added a little sauce to my ribs. Not a lot, and they didn’t “need” them per se – as  I said, they weren’t dry – but I wanted them to be just that touch bit wetter. I think by the end, I was dipping my naked bone into the sauce alone just for that delicious taste. Oh yes, I liked these ribs.

Eric said they were one of the best ribs he’s had in the city. I know, I know, you’re not here to read about some guy you don’t even know’s opinion on ribs when you have no basis of knowing how knowledgeable he is on ribs. But I thought I’d share that I wasn’t the only one to enjoy them. That’s all. They were good, and I tried to go back a few weeks later only I was drunk and didn’t realize it was after midnight or notice all the chairs were on the tables, but thankfully whoever I was with did, and pulled me back before I tried the door. 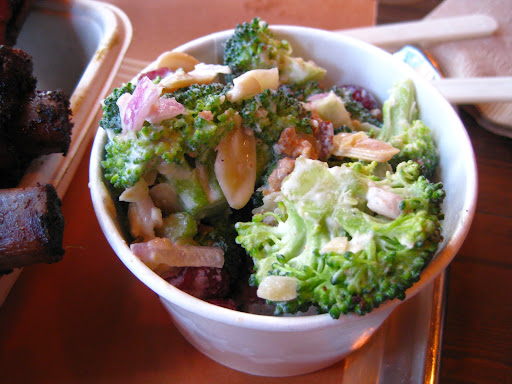 Because I like vegetables, I also got the buttermilk broccoli salad with almonds and bacon. Eric expressed concern over the buttermilk – I don’t remember what, but sometimes I just look at him like “your concern is unwarranted! hush and eat it!” and this time he tried it and said it just tastes like ranch. Derrr, buttermilk ranch is a thing. Anyway, I liked this a lot – the bacon lent a little smoke, which was a nice nod to being in a barbecue place, but also the broccoli was super crisp, barely cooked. I hate when broccoli is overcooked to the point it’s mush. I eat it raw, too, though I know some people find that just too bitter (and I did as well, when I was a kid). The slivered almonds added another touch of crunch, which I thoroughly appreciated and liked this side a lot – would get again! 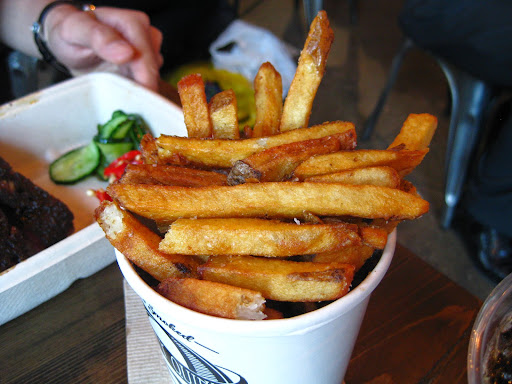 Eric also got fries, which were just fine. I don’t remember much about them except that they took a few extra minutes to come to our table, but they didn’t stand out so they were likely neither awful nor amazing. Just fries.

Overall, I really enjoyed Mighty Quinn’s – not having to wait in a stupid ass long line in the beating sun at Smorgasburg and then eat outside without running water probably helped with that – but also the food was just solidly tasty. Aside from that crap they tried to tell us was burnt ends – seriously, if that’s what they routinely serve as burnt ends, WTF? – I was very happy with our meal. I will definitely be back sooner than later for some excellent ‘cue – try some of their other items, as well, like the brontosaurus rib (huge beef rib! I wasn’t hungry enough this time around to get it, or even try to split it)… mmm, MEAT.

Oh, and they have root beer on tap. Like a REAL BBQ place SHOULD!

Go there, but stay out of my way on line if I’m hungry, or I will bite you. You look like a tasty animal that could be smoked for hours… mmm smoke