A few days after I returned from my most recent trip to SF, I headed over to Bobwhite Lunch & Supper Counter for some fried chicken – no, I hadn’t had my fix at Pollo Campero, never enough fried chicken! – and to take Dessert Zombie out as thanks for watching my little monster aka my baby aka my dog, Keywee, while I was in SF. I actually visited Bobwhite months ago – back in August, I believe – while I was on my blogging hiatus, and had enjoyed it, but thought it was time to return and document the experience using something other than my phone.

*I visited back in August after reading a blurb in a magazine where Chef Michael White mentioned it as one of his favorite places for fried chicken. Thanks for the hat tip! 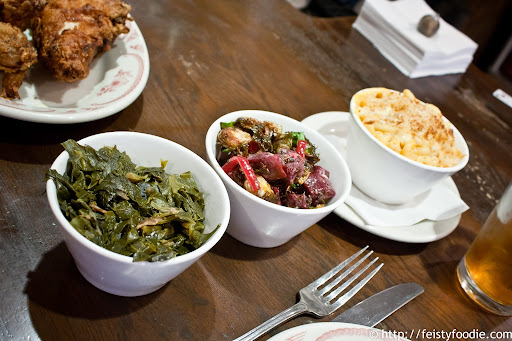 Collards on the left, mac and cheese on the right, and in the middle: one of the day’s specials, a brussels sprouts, beets and pickled onion “relish” of sorts that I couldn’t stop eating. So good – crunchy, tender, pickled, sweet, just the perfect combination of flavors and something to cut the grease of eating fried chicken. YUM. 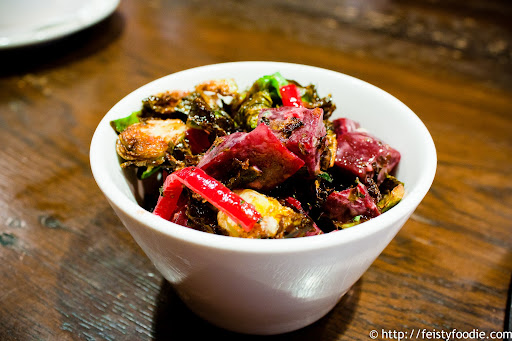 If this was always on the menu, I’d walk over every single day to get this. Seriously. I should figure out how to make that at home… 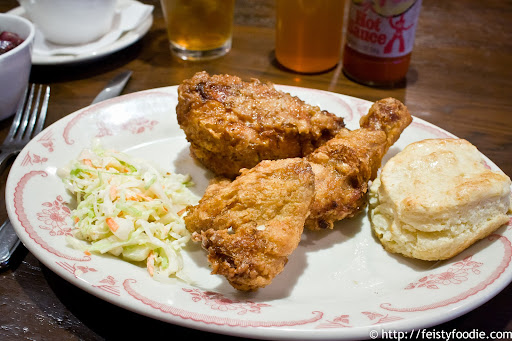 The main event! Fried chicken supper, which comes with 3 pieces of chicken, a biscuit, cole slaw, and a side. The cole slaw was nothing to be excited about, the biscuit was good with honey… and the fried chicken? Well, 3 pieces is a lot of chicken. I received a breast, a drumstick, and a wing piece. Unfortunately, Dessert Zombie got a breast and two wings, which seems kind of imbalanced… especially given that I’ve seen other people receive all dark meat! I should have asked if we could have all dark meat.

Having said that, the breast – a piece I generally don’t like – was very juicy, moist, and perfectly fried. I added a splash of hot sauce towards the end because it started to taste a little repetitive and bland – not a lot in terms of flavor – but otherwise fine. The drumstick and wing fared better, as smaller pieces of meat, nice bites of well-seasoned, juicy, fatty fried chicken. I enjoyed it all, but I was disappointed not to have gotten a thigh – my favorite piece. 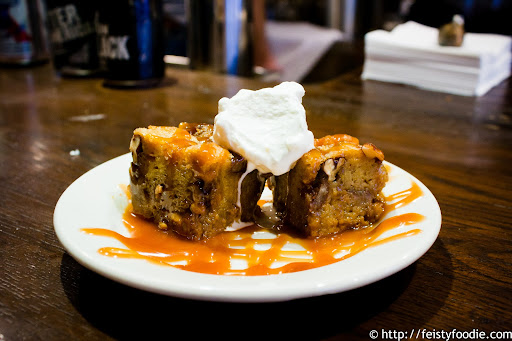 Though I was completely stuffed, we’d seen other people ordering dessert and I’d heard or read that the banana pudding was something amazing. I am a sucker for banana pudding though I hadn’t had it in a very long while… Dessert Zombie politely ordered the other dessert offered, a pecan pie bread pudding, which looked dense, sticky and yummy… I demurred and concentrated on my own. 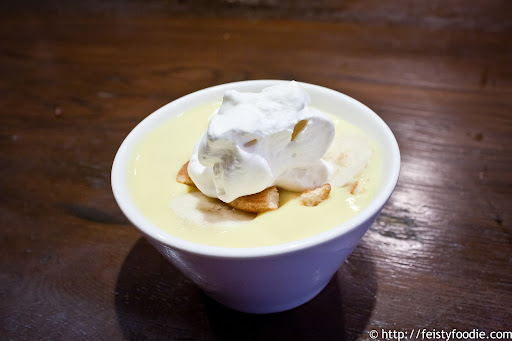 The banana pudding was served in a huge cup… and while it looked fantastic, I just wasn’t a big fan. Something about it was off – there wasn’t enough Nilla, there wasn’t enough banana flavor, there wasn’t enough… something. Oomph. I don’t know. I had about 3 big spoonfuls (or 6 small bites) before I stopped trying to force it. (I actually got really sick, but less from what I’d eaten and more from how much.) Dessert Zombie seemed to agree with me, while he happily polished off his dessert, he left mine after a few bites.

Overall, I think the fried chicken at Bobwhite deserves a spot on anyone’s list of fried chicken contenders. It’s a good thing it’s pretty far from the subway or I might find myself there a bit too often – and I’ll know next time to ask for all dark meat.

***Update: This post was written about my experience in February 2013. I revisited a few days ago and discovered that they happily oblige an all-dark-meat request, and received 2 thighs and a drumstick, and I was in heaven. I will be doing that going forward… and this may just… mayyyyy just become my new favorite fried chicken place in NYC… swoon.