It never ceases to amaze me how fast time flies, so before I knew it the calendar flipped to April yet again and that meant my birthday was fast approaching. Last year, CT totally surprised me with dinner at Per Se for my 30th. Actually I am still in shock. She got me really good. Since I am getting older she didn’t want me to have a heart attack, so she let me choose where I wanted to go this year.

I read a couple months back that the revamped Torrisi Italian Specialties would have a special 20 course historical tasting menu available with reservations 30 days in advance. I went to a talk at the New York Public Library last year that featured former NY Times food critic William Grimes and his new book called Appetite City. The NYPL has a huge archive of menus from NYC restaurants dating back hundreds of years. You can really learn a lot about a society from what they ate. I highly recommend the book. The Chefs from Torrisi utilized the same archive to come up some dishes based on these old menus with their own twist. We recently went to their newer and more casual restaurant, Parm, and enjoyed it very much.

A couple days before my birthday, The Ulterior Epicure came out with his review of the menu and got me even more excited!! There is also a great photo set on Flickr (much better than pics below) with more thorough descriptions of each course. Sorry we didn’t take notes during the meal.

It was $125 per person, but actually the Monday after the price went up to $150. After we were seated by the friendly staff, we were informed that there is an optional wine pairing for $75 pp. Yikes! We just shared a bottle of wine instead. Shockingly, the cheapest bottle was $50. I guess they plan on making a profit through wine sales instead of food?

There are two seatings a night for the special tasting menu so we had the earlier one at 6:45. I don’t think we could have handled the 9:30/10 seating. Since they have a set number of diners and we all arrived at the same time, the food starting coming out immediately. They still had a couple of tables available for their $65 four course prix fix. I am pretty sure they only had a max of 10 tables (mostly two tops) and a handful of seats at the small bar. The space is SMALL, but there is just enough room between tables.

The first couple of dishes were bar snacks that came out quite quickly one after another. We were warned.

They started us off with a mocktail called “Our Americano.” Since they only have a beer & wine liquor license, they can’t serve full-on cocktails. Although I don’t drink Americanos very often, I am familiar enough with the flavor of Campari. This definitely had that same unique taste. A refreshing way to start. 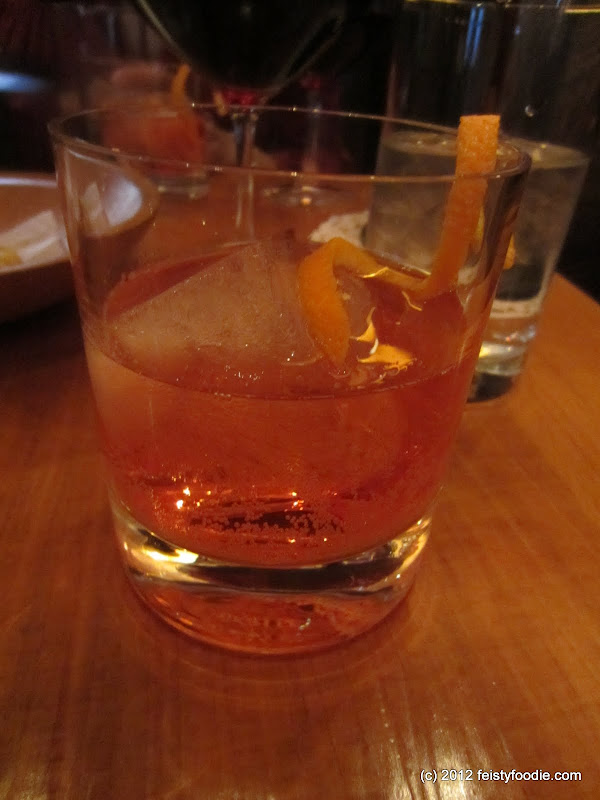 Pretzels- These tiny little pretzel balls were served fresh out of the oven. They were sprinkled with some salt and caraway seeds. A great salty snack with the mocktail. 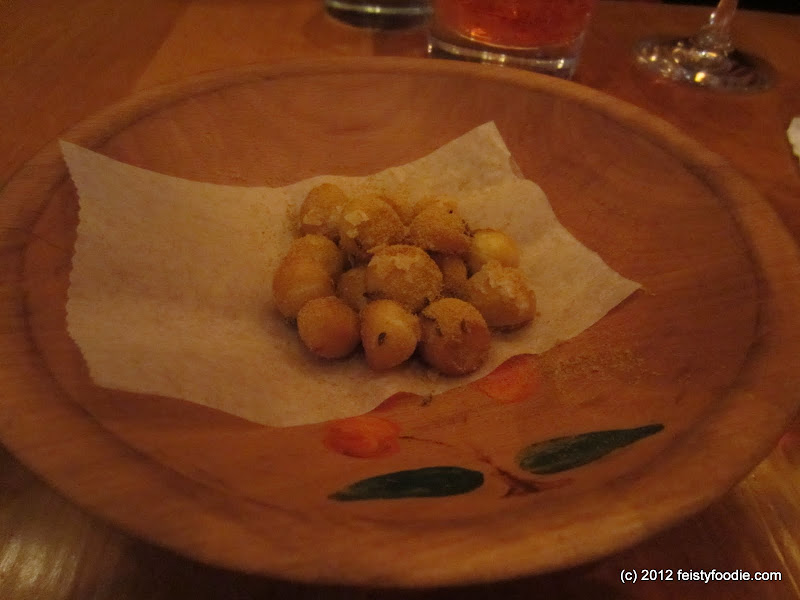 The Quail’s Olive- An olive course. Or is it? Fortunately, it was not or else CT would probably have gotten up and left due to her hatred of olives. These were actually compressed quail eggs dyed with squid ink that looked exactly like your standard whole black olive. Both egg and olive flavors are usually quite strong, but in this preparation each was muted perfectly. 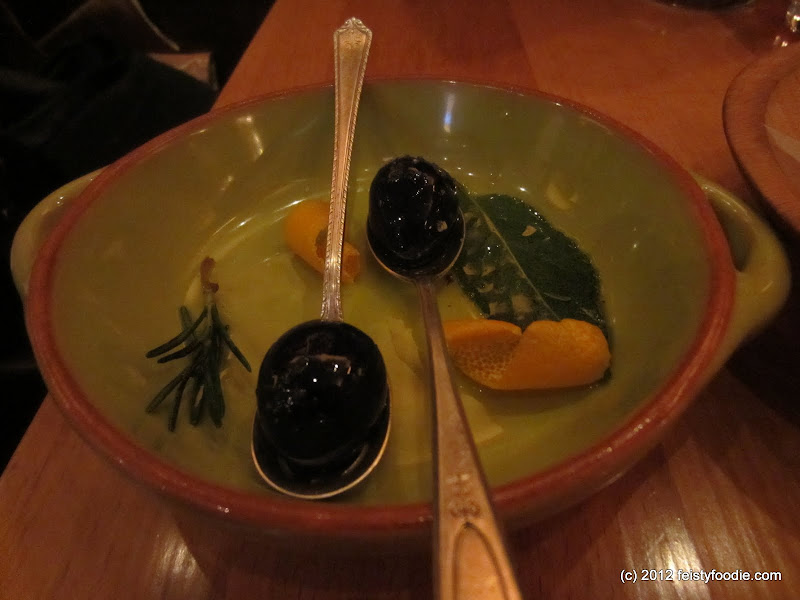 Smoked Sable Cigarette- It consisted of gnocco fritto, sable, cod roe, and poppy seed “ashes” served in an ashtray. When I first heard about this course when the menu was announced I was a little apprehensive since no one eats cigarettes. Remember the massive fail of the edible “cigar” Chris made on Top Chef last season? I am not really a fan of cream cheese but it was a small cigarette, so it was ok. The crunchy fried dough with the creamy cheese and just a hint of salty fishiness from the sable and roe was delicious. 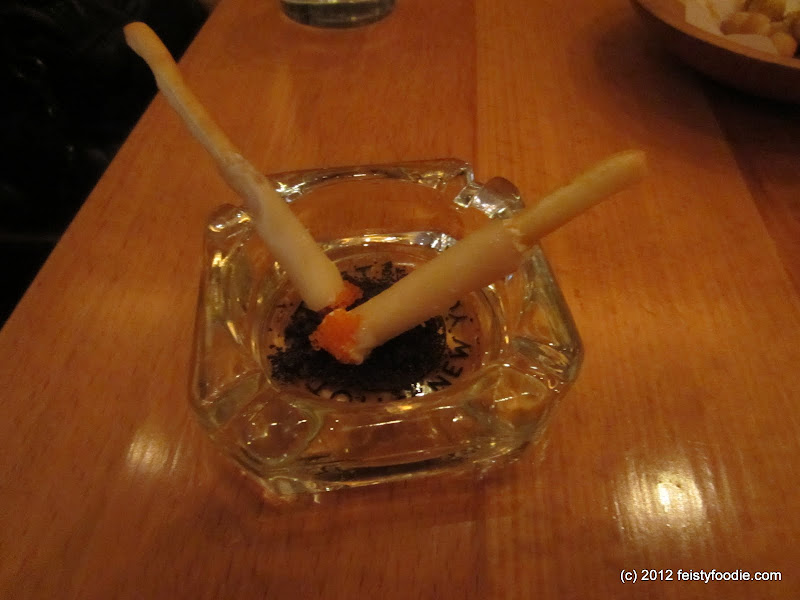 Clams and Oysters on a Half Shell- I forget what type of oyster it was, maybe a Bluepoint? It was topped with a chili pepper mignonette that was very good and packed a nice hit of heat. I believe the chili pepper was locally grown. I think the clam was a Littleneck that was served with a beer foam on top. It was also very fresh and delicious. 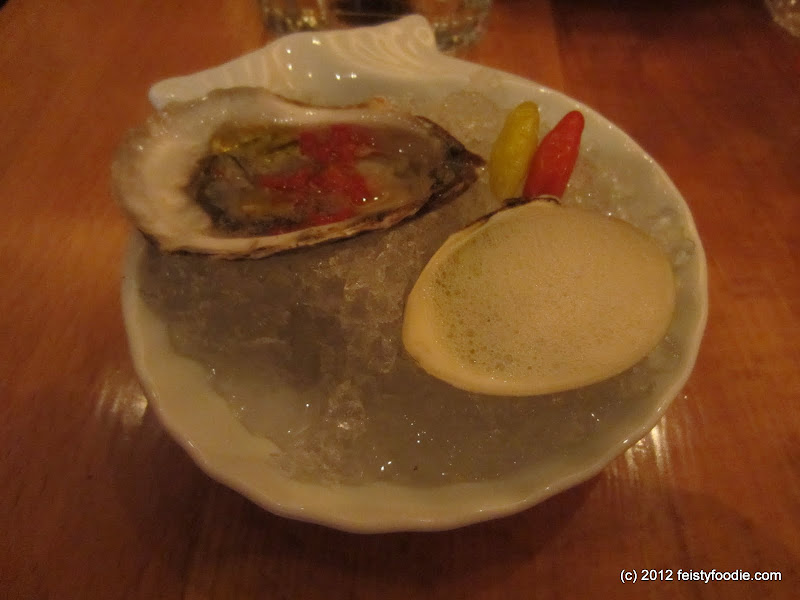 Buckwheat Caviar Knish- I loved the antique silver serving dish. Tiffany’s? I am by no means a knish aficionado, but this was a very good bite. Topped with caviar, how could it not be? I made sure to get plenty of toasted kasha stuck to the bottom to add some extra crunch. I tasted some of the kasha on its own and liked it very much. Great roasted toasty flavor. 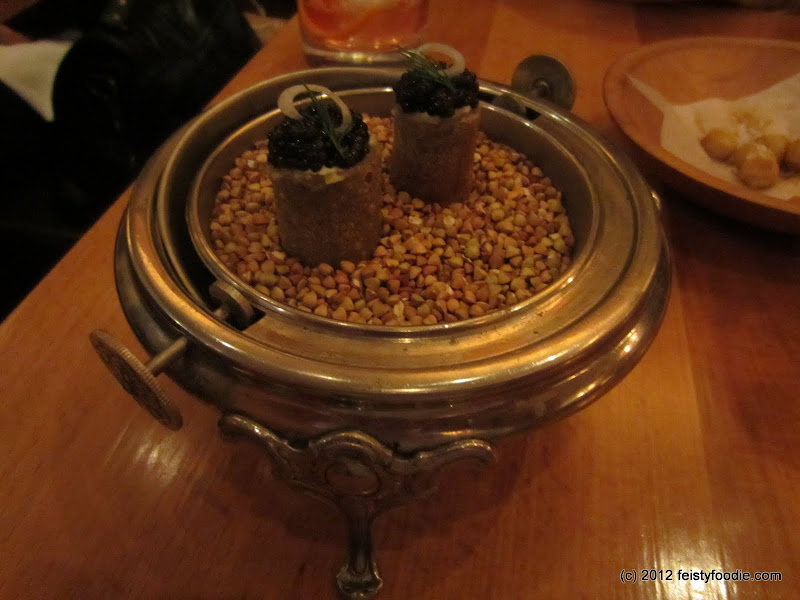 Escargot Casino- It is hard to see the actual snail on the skewer. It was wedged on with some house-smoked bacon. It was a tasty bite that was mostly bacon flavor, but the snail did add some texture. I appreciated that they used a classic escargot dish as the serving dish. They were really creative when designing the menu! 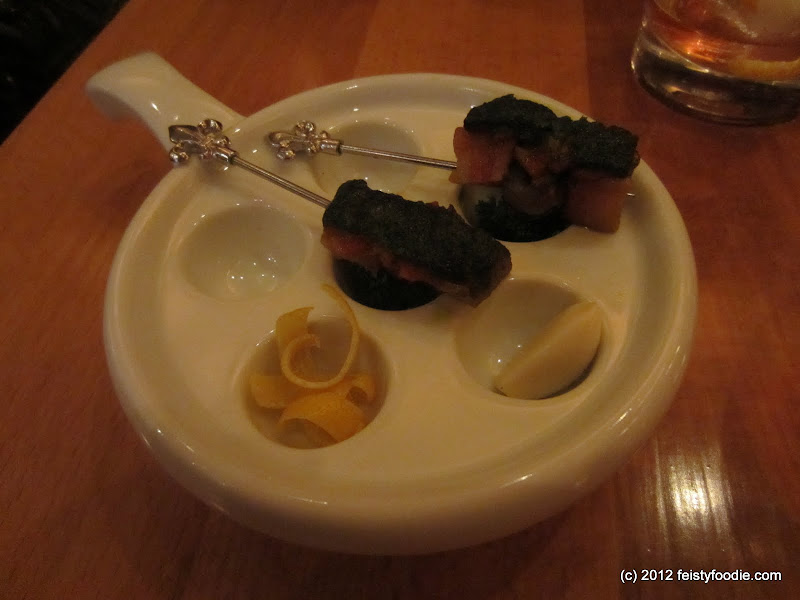 Chicken and Cashews- A nod to that classic Americanized Chinese Food dish. I am pretty sure we always ordered Chicken and Cashews when eating Chinese food growing up. Here they used the chicken “oyster,” which some consider the best piece of meat on a chicken. It was poached and then lightly fried and rolled in chopped cashews & oyster sauce. Those forks are Tiffany too. As expected, it was really delicious! Rich meat and crunchy nuts was a great combination. 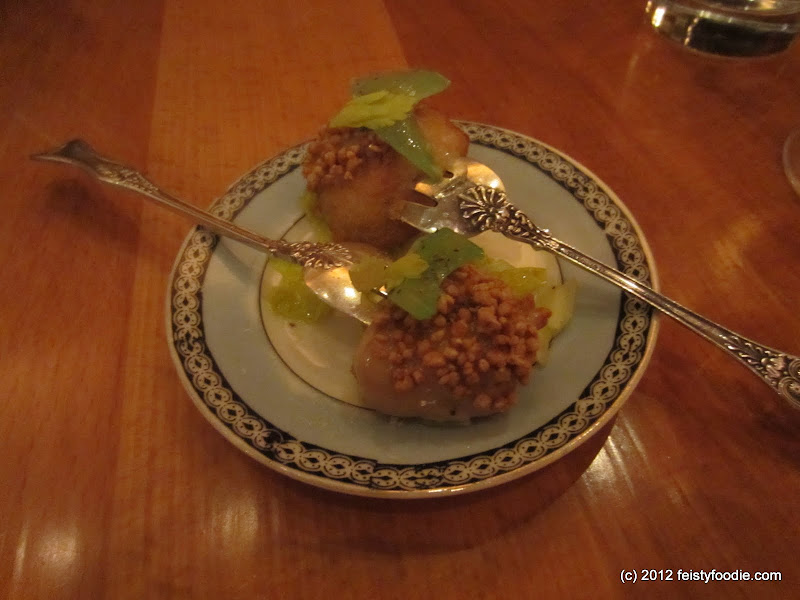 Brighton Beets- A nod to the Russian population in Brighton Beach. A simple yet delicious beet course. I believe the beets were locally grown(starting to notice a theme here?) and served on pumpernickel cream. I think there might have been some slivers of pear too. 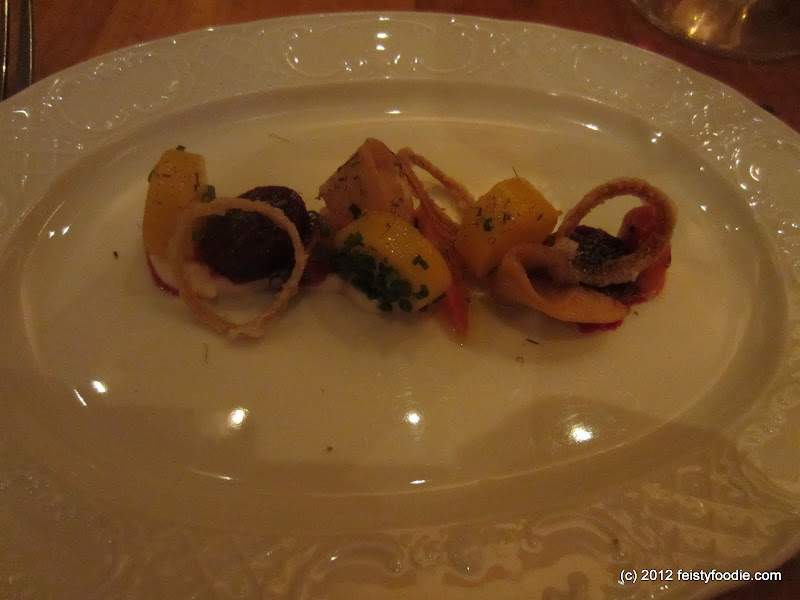 Mackerel in Crazy Water- The mackerel crudo was served in a tomato broth aka “Crazy Water.” The fish was light and fresh, not too fishy. The best description of the broth comes from Serious Eats, “The amazing broth tastes like the best gazpacho you’ve never had.” Yes, CT & I made sure to get every last bit of broth in our bellies. We would have picked the bowls up to get the broth faster, but since we were “dining” we stuck to using our spoons. 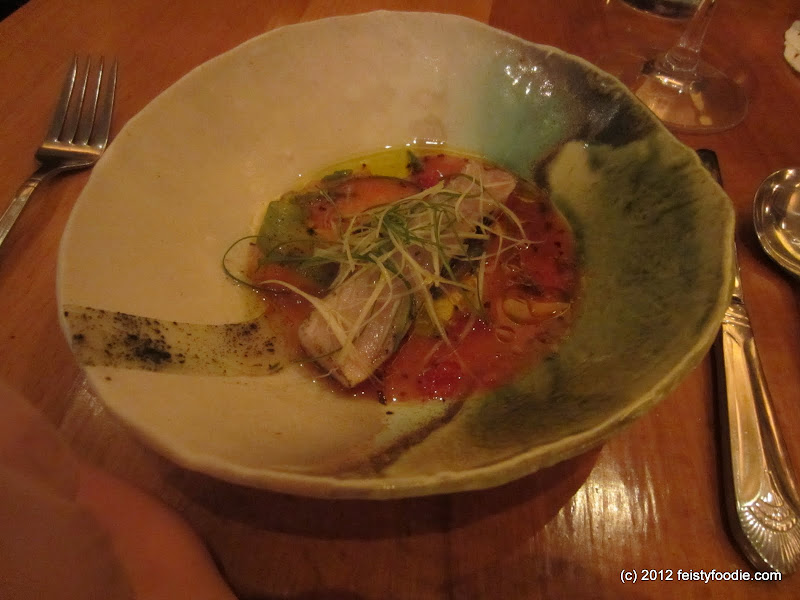 The next two courses were served simultaneously since they were both a nod to Delmonico’s, considered to be the first restaurant in NYC.

Foie Gras Newberg- CT was quite ecstatic when this was served. Although she is much better versed in duck liver than I am, we both agreed that this was of the best preparations we ever had. They did a great job taking the “liveriness” out of it, while not making it too cloyingly sweet. It was served with a couple of slices of toasted brioche on the side. 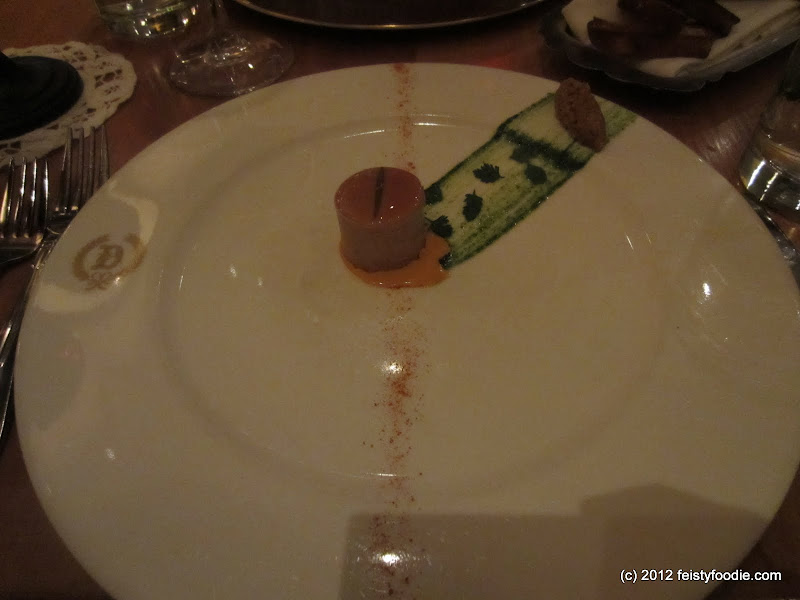 A closer shot was needed. Such a beautiful presentation. 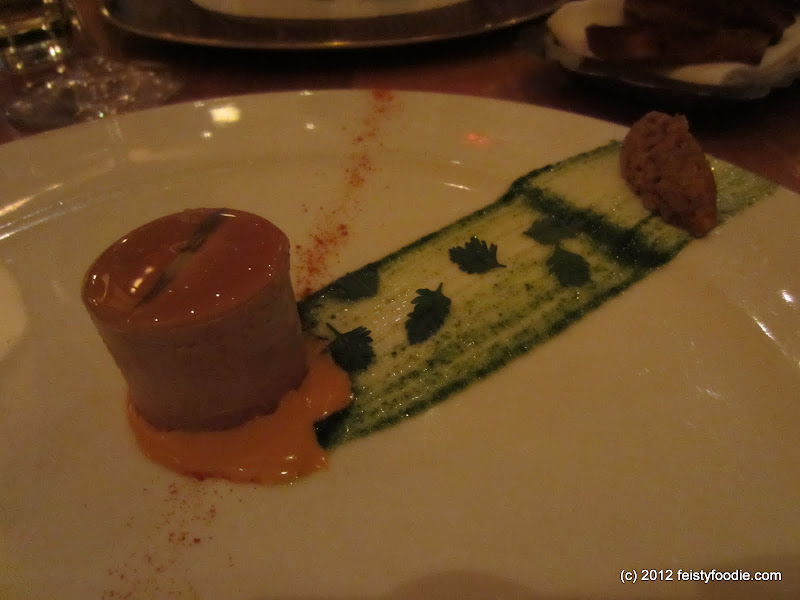 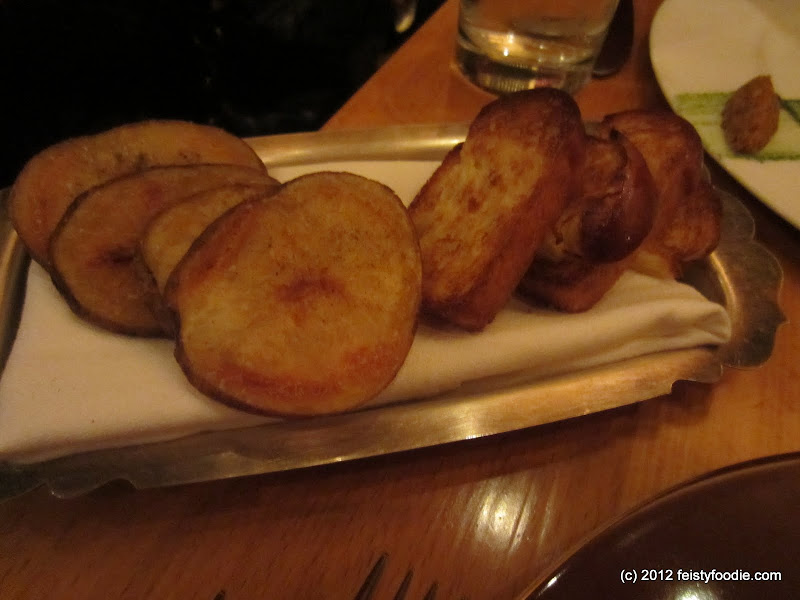 Delmonico Tartare- This was an amazing beef tartare plated beautifully with an expertly place spread of cornichon slices and a “bernaise egg yolk.” It was served with some thick potatoes slices that were surprisingly quite crunchy and a little heavy on the salt. However when eaten with the tartare it was a great bite. 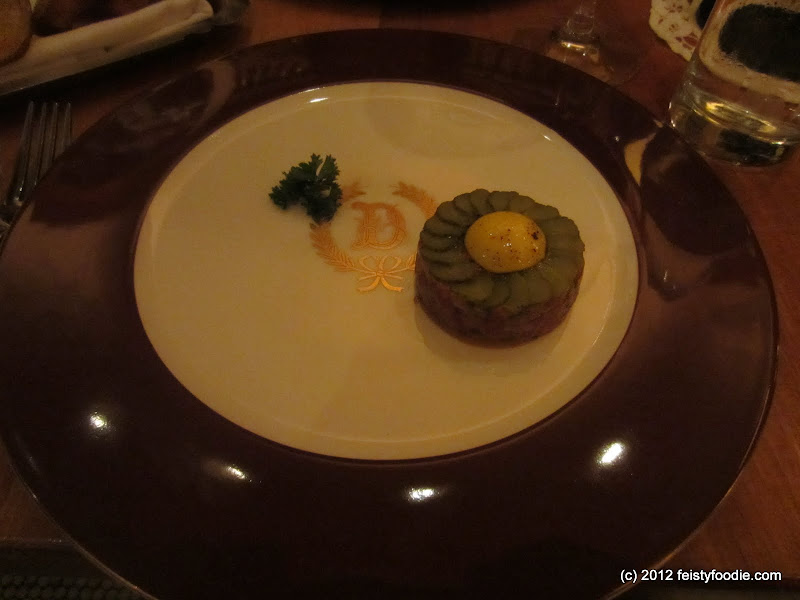 Dancing Ewe Sheep Ricotta and Ramps- Simply this was the BEST GNOCCHI I HAVE EVER HAD! Super light and buttery, it just dissolved in my mouth. While I could care less about ramp season, they were a nice touch to bring some roughage to the rich dish. 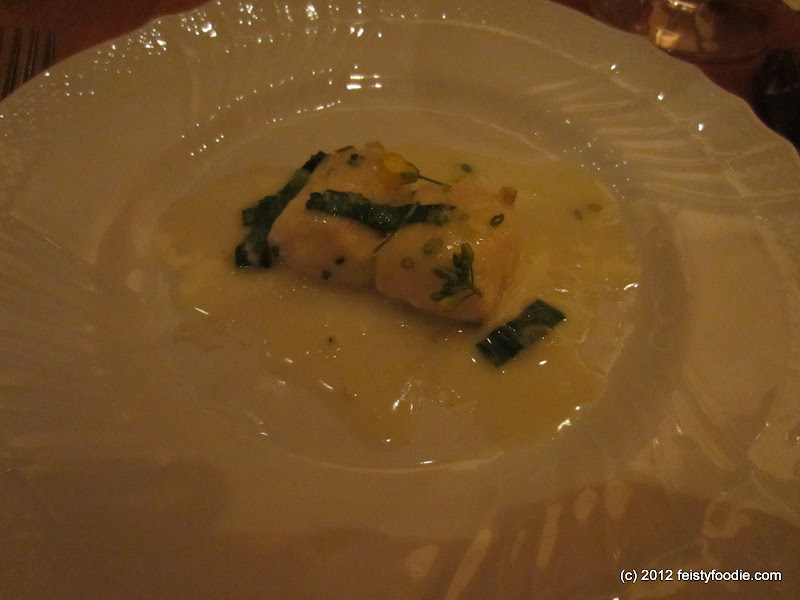 Lobster Cantonese- An Italian twist on a Chinese dish. Spaghetti with lobster and I believe a bit of crumbled sausage with toasted breadcrumbs. It was almost carbonara-like. With the first taste I thought they may have made a call to the bullpen and brought in Michael White to cook this dish. Very close to the pasta served at Ai Fiori or Marea. I was very very happy with this course. 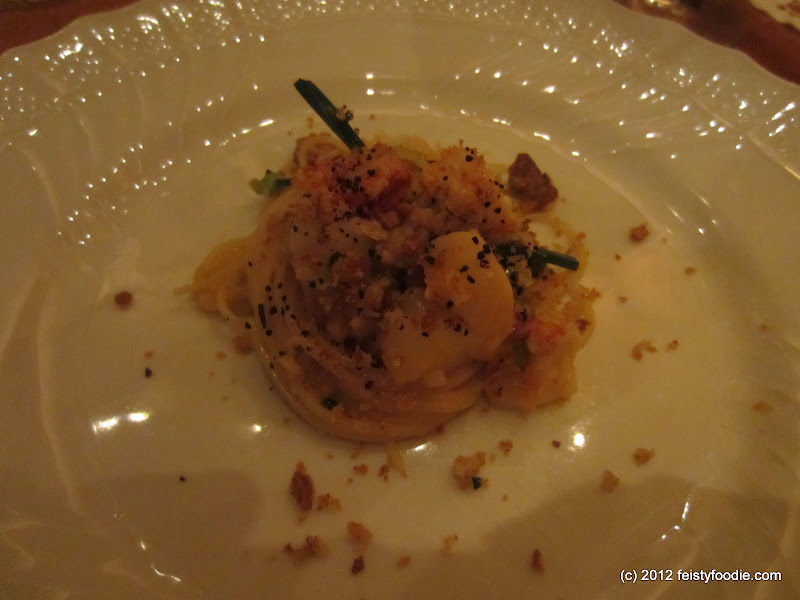 Ravioli Caruso- The last of the pasta courses was a ravioli filled with chicken liver puree. Fortunately for me the liver wasn’t too minerally, so I went ahead and ate this perfectly cooked pasta pouch. 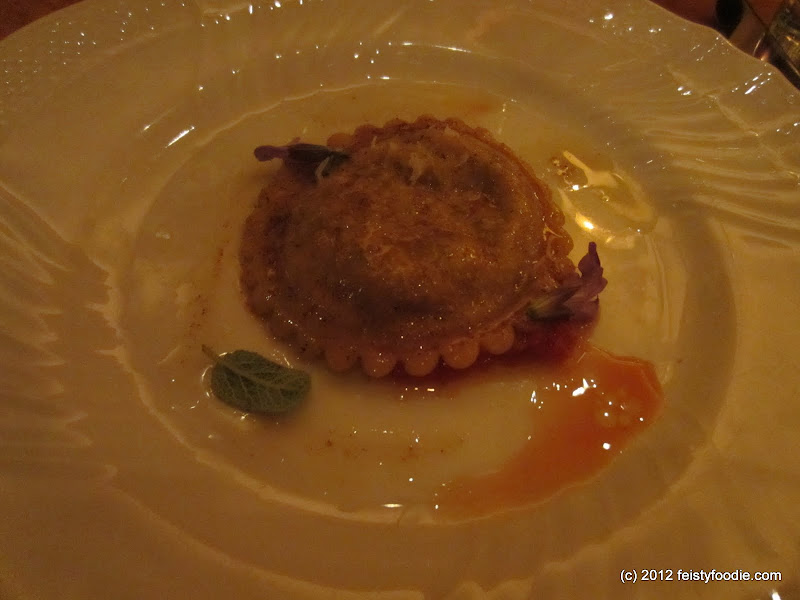 Jewish Lamb- We were actually presented with the whole lamb chop at the table before it was carved up, but we were too busy to take a picture. It was cooked with a Manischewitz glaze that had just the right amount of sweetness, unlike when drinking the wine straight from the bottle. The lamb was very tender and delicious. I believe it was served with some fried sunchokes and potatoes. 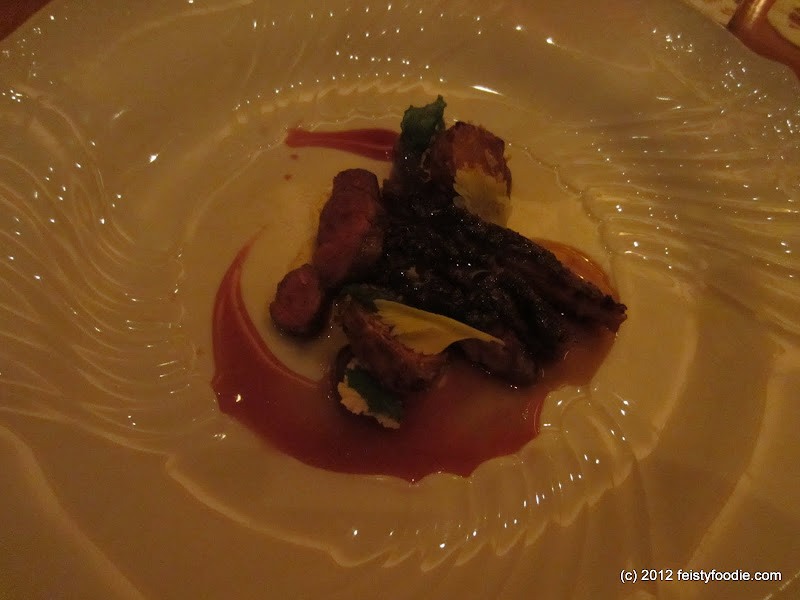 Bitter Greens- How appropriate on the last night of Passover to be served bitter greens. This was a small salad of radicchio and other unknown greens tossed in a light vinaigrette as a palate cleanser. It did exactly as advertised to counteract all of the butter/pasta/meat we just ingested. 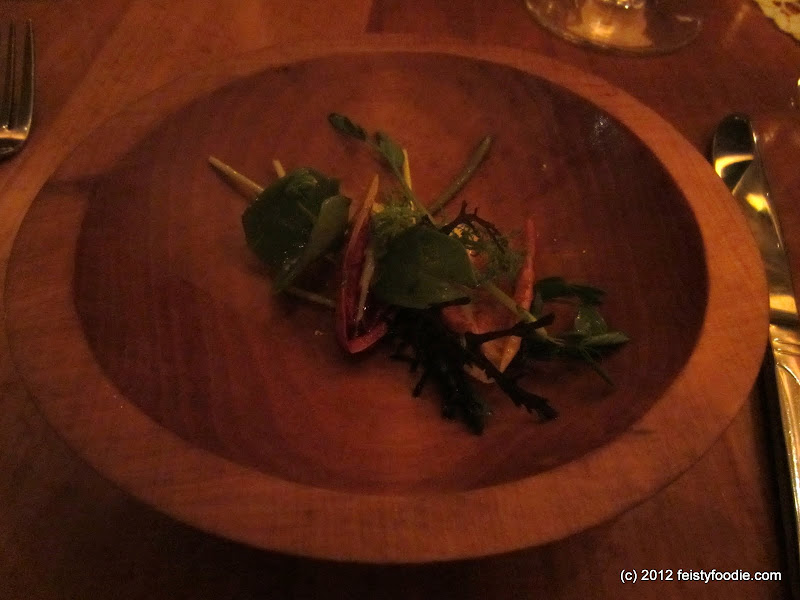 Cheese Danish- Like the lamb, the entire danish was presented tableside on a nice marble plate, but I didn’t get a picture. We were each given a quarter piece to start. The base danish was light and flaky, while a somewhat funky cheese was used on top which was then topped with a slice of pear. When I think of cheese danish, I think of Entenmann’s classic cheese danish that has a sweet cheese. The stronger flavor cheese worked like any good cheese course would. I actually needed a second picture to show you how gooey the cheese was. After we finished, we were given the option of having our second piece. Of course we said yes, haha. Diet starts tomorrow. 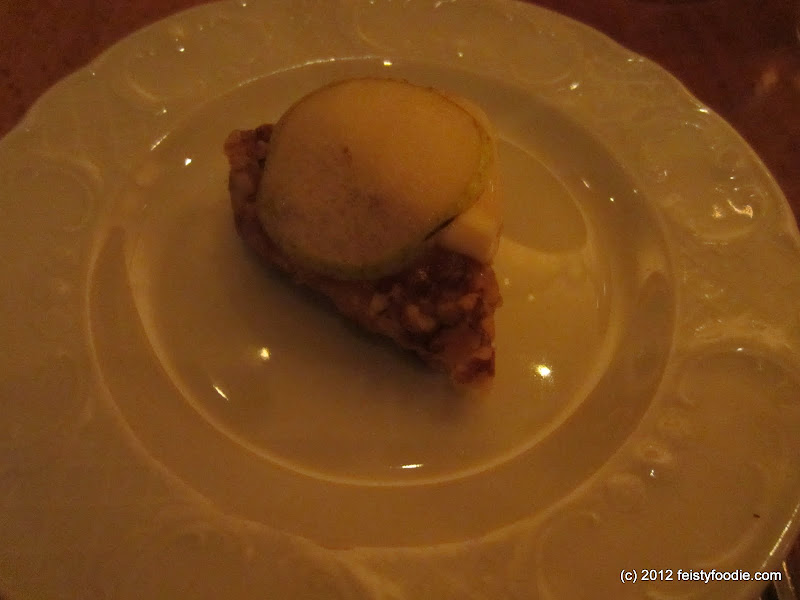 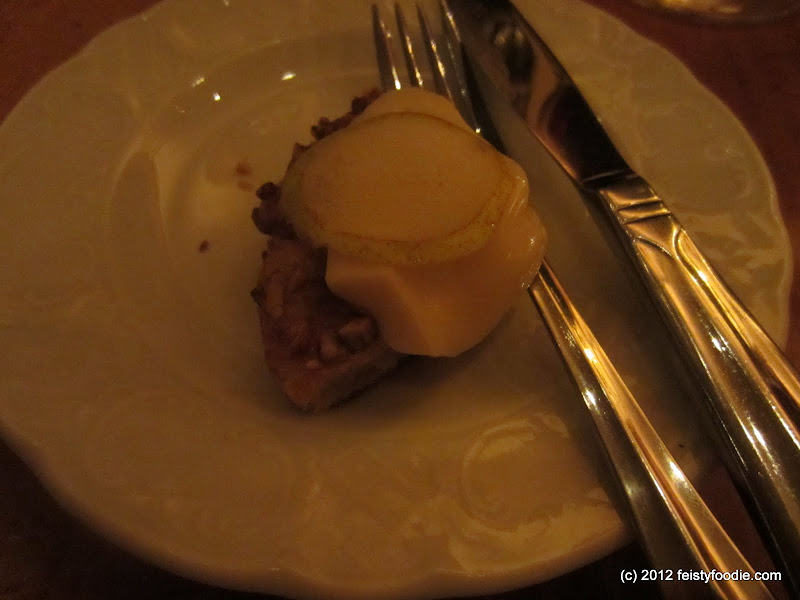 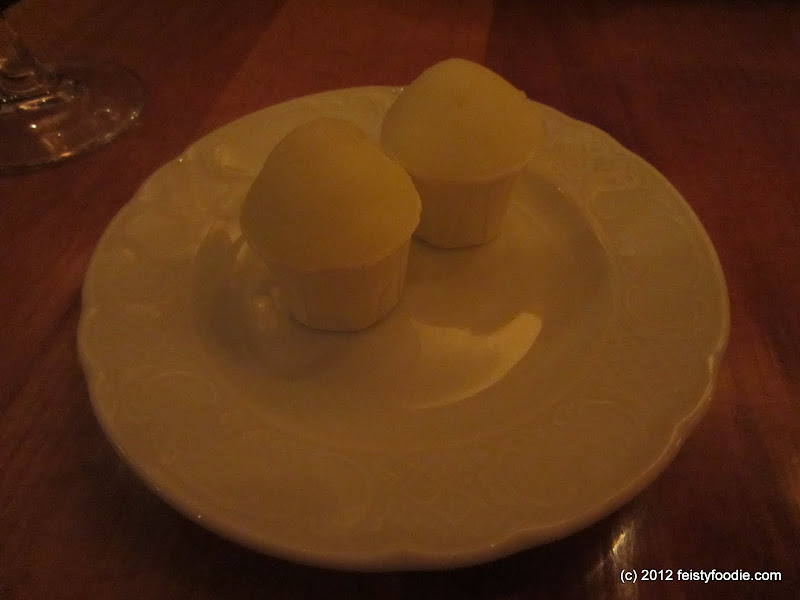 Maraschino Float- Again, I need to borrow from the Serious Eats’ description “A maraschino float made with housemade maraschino cherry soda…with an edible evaporated milk straw… and a malted root beer candy bar …sour cherry vanilla ice cream with pretzel breadcrumbs.” What a dessert! Super creative and everything was delicious. I am not the biggest maraschino cherry fan, then again not many people are, but it worked. 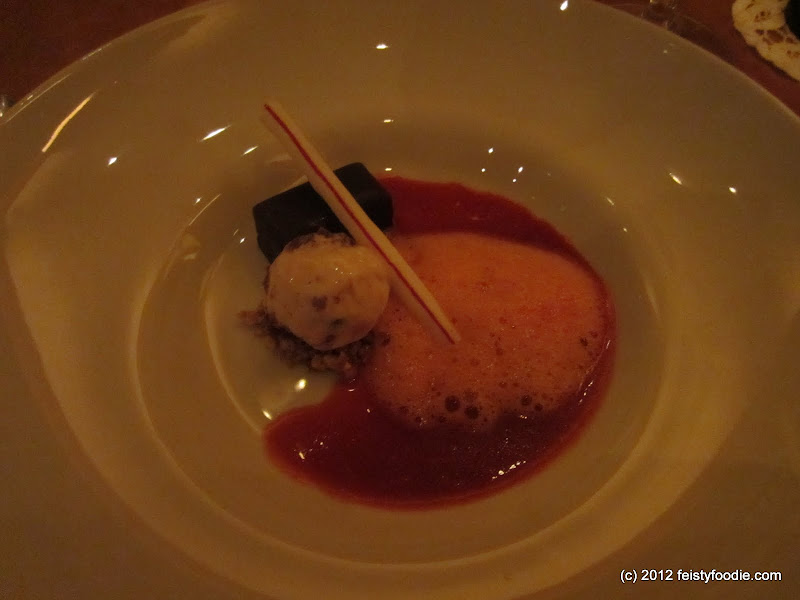 Pastries- A whole bunch of mignardises were served on a beautiful antique platter. Apple fritters, pizelle cannoli with Salvatore filling, fried pastry, pine-nut biscotti sandwiches, custard cakes, celery cake with grape jelly, sesame saltwater taffy; and chocolate-mint truffles. We were pretty beyond full at this point, but we made an effort to at least try each one (for the sake of the blog). I couldn’t appreciate them, so it wouldn’t be fair to pick a favorite. 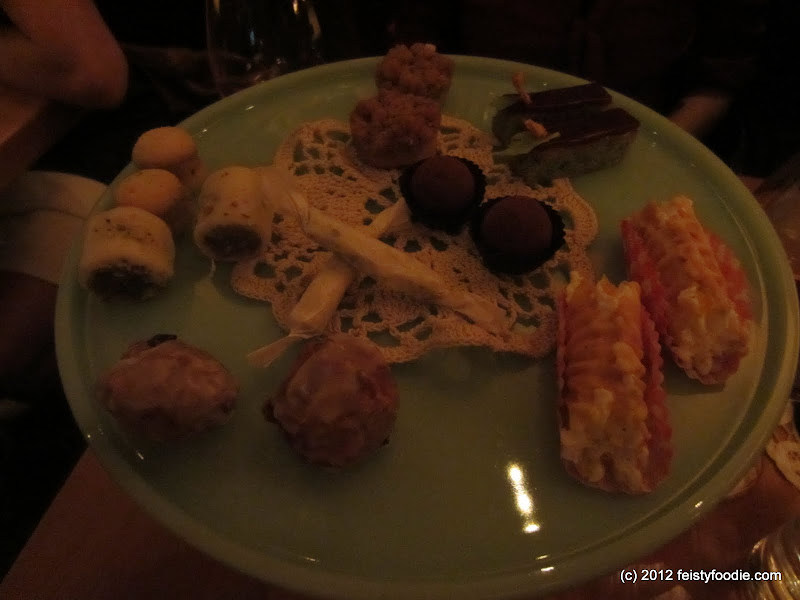 We ordered some espressos to aid in the digestion. 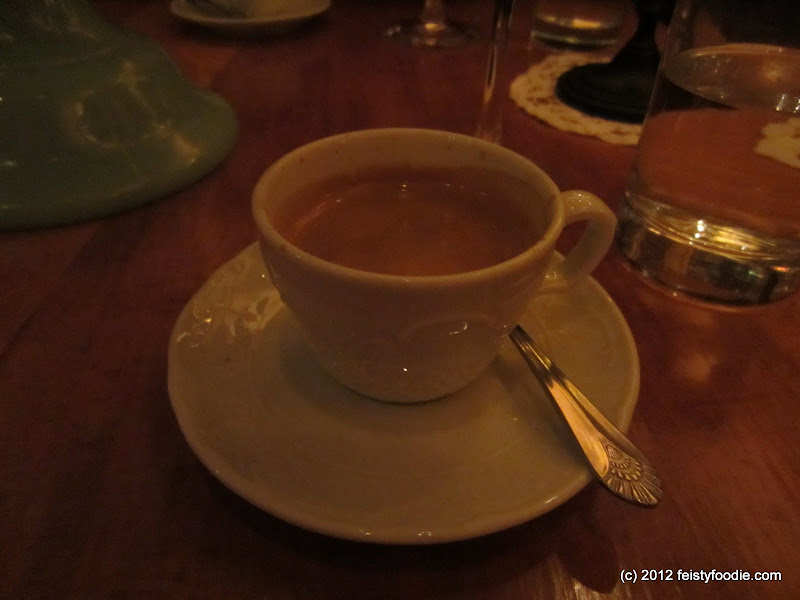 Our parting gift was a little box with a rolled newspaper. Inside the box was a classic rainbow cookie while the newspaper was actually a copy of the menu. A very nice touch. 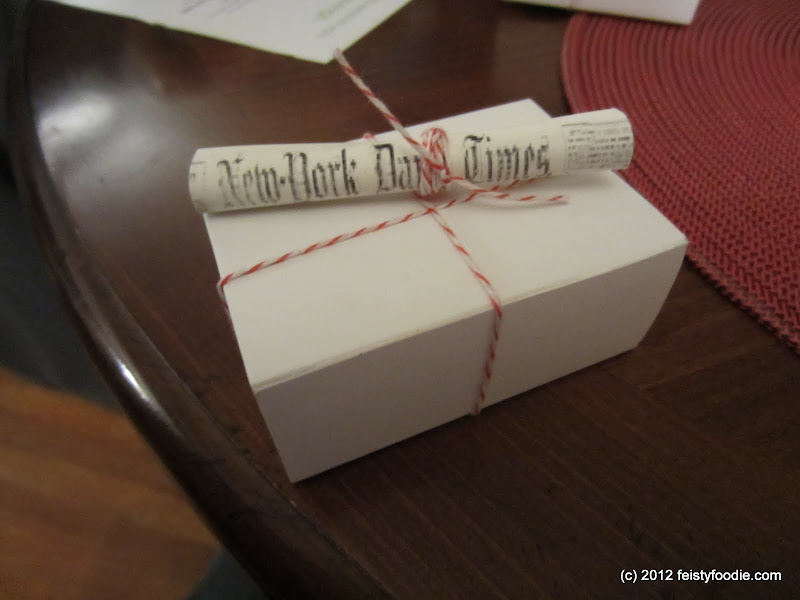 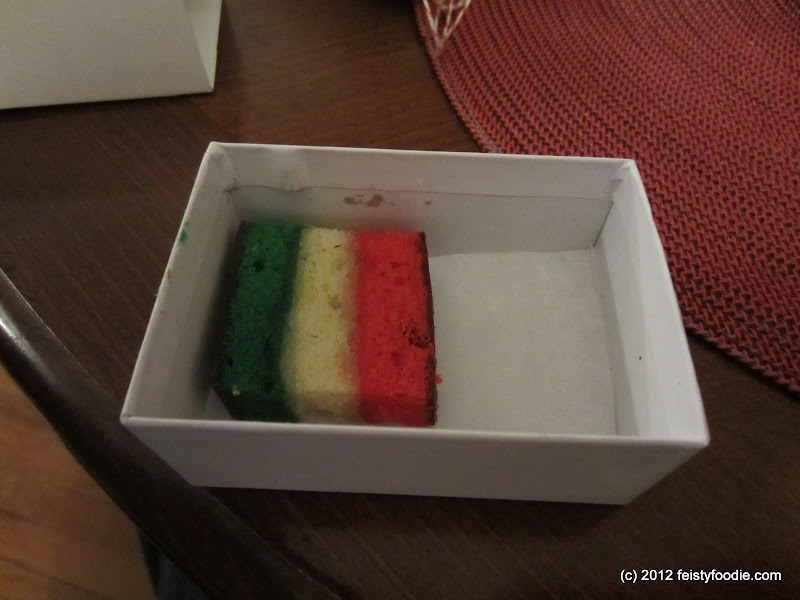 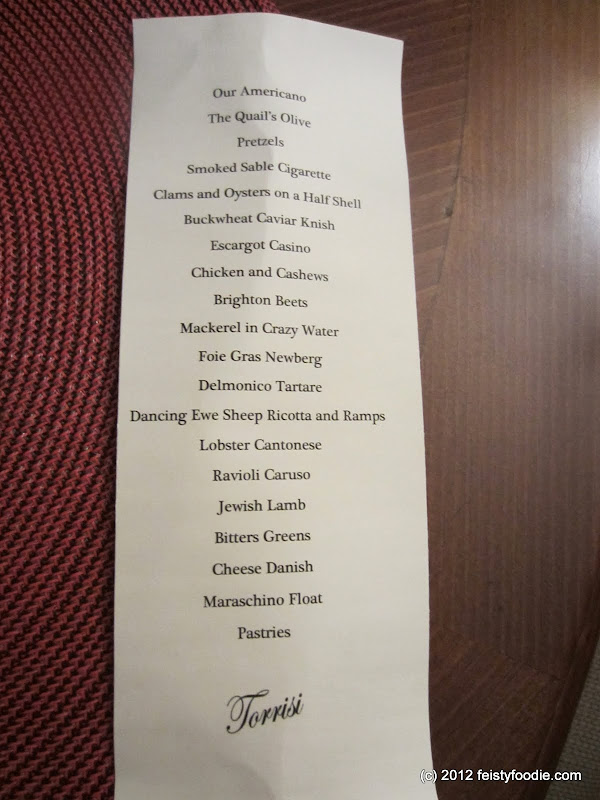 All in all, the special 20 course historical tasting menu at Torrisi was FANTASTIC. Not only were was all of the food cooked perfectly, the service was top notch. Definitely the same level at some of the Michelin starred restaurants in NYC. Eventhough the price has now gone up to $150, I would still say it’s worth checking out once. CT and I will definitely be back for the $65 prix fixe. Thanks again CT for such a wonderful birthday treat!