A couple weeks ago, it was announced that Mad. Sq. Eats was coming back once again this Spring. CT and I have both enjoyed it a lot during past iterations, so it wasn’t a question of whether we would return. As it has become quite popular, it is all about when you go. We decided to go for brunch this past Sunday hoping to beat the crowds on what turned out to be one of the nicest days of the year.

This time around there were a bunch of new vendors than in the past, which helped freshen things up a bit. Amazingly, most of the tables were already taken up by 11:30, but we were able to find one for ourselves without too much difficulty. There is a group of three “secret” tables, but I’ll let you find them yourself.

CT decided to get something from a new vendor called Mayhem & Stout. Pretty sure she just chose them because of their name, haha. They offered a couple of different pulled meat sandwiches. She chose the pulled pork sandwich ($10). It was quite a hefty sandwich filled with a good amount of juicy pork topped with some shredded brussels sprouts and a couple squirts of their “Dragon” sauce (similar to BBQ). While the pork was nice and tender, I thought it was a little lacking in the flavor department. I would have appreciated some more sauce on it. While I am not sure I would get it again, it was worth risking it to try a new vendor I never heard of before. 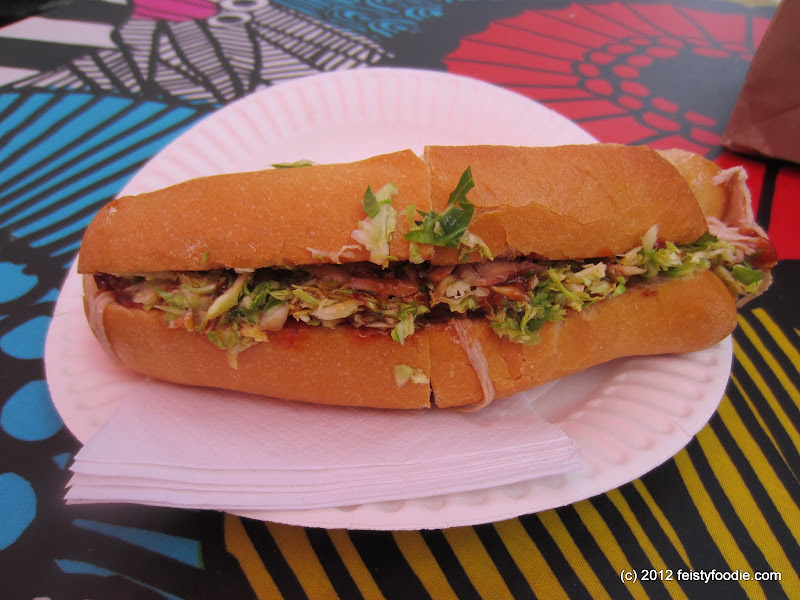 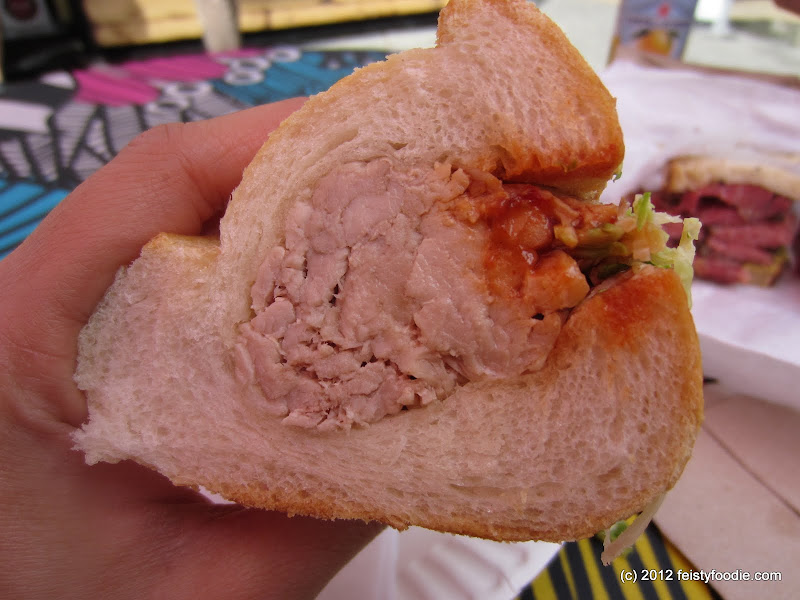 I was in a Jewish deli kind of mood, so I went to another newcomer to MSE, Mile End. While I have never made it out to their original Brooklyn location, I did enjoy one of their sandwiches at Meatopia a couple years ago. They recently opened up a second location in Manhattan that isn’t too far from CT’s volunteer spot, which I foresee us visiting soon. At MSE, they were offering their original Smoked Meat sandwich or Smoked Turkey. I went the Smoked Meat. It came on rye with mustard and a pickle on the side for $12. I was impressed that they had a mechanical bread slicer on site for the rye. CT in a nod to Midtown Lunch used her Metrocard for perspective. It was a small sandwich, but considering it was all meat, it was plenty large enough. The meat was some of the best “pastrami” I have ever had. It was well worth it knowing the work and ingredients put into it. I was also impressed with the payment system they use, Square. They turned an iPad into a cash register. After swiping my card, they turned around the iPad to let me add a tip if I chose so and to then email the receipt to myself. Pretty cool! 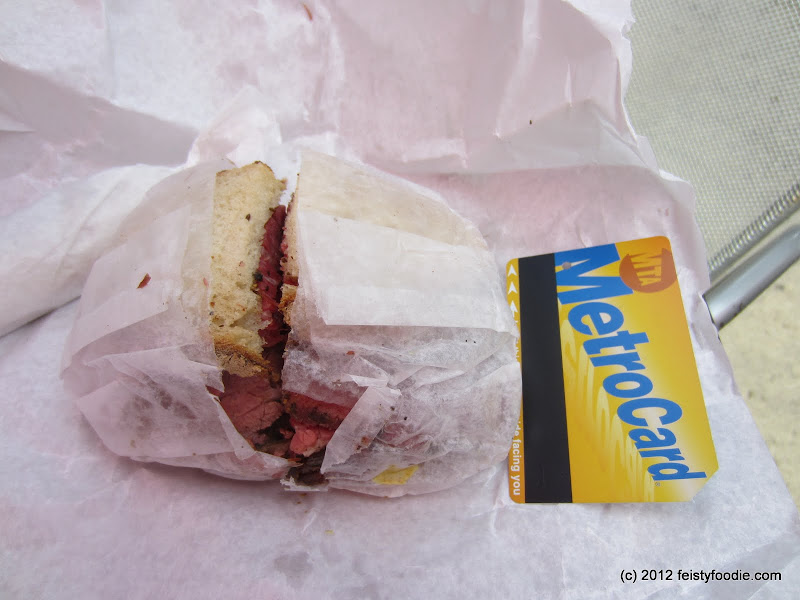 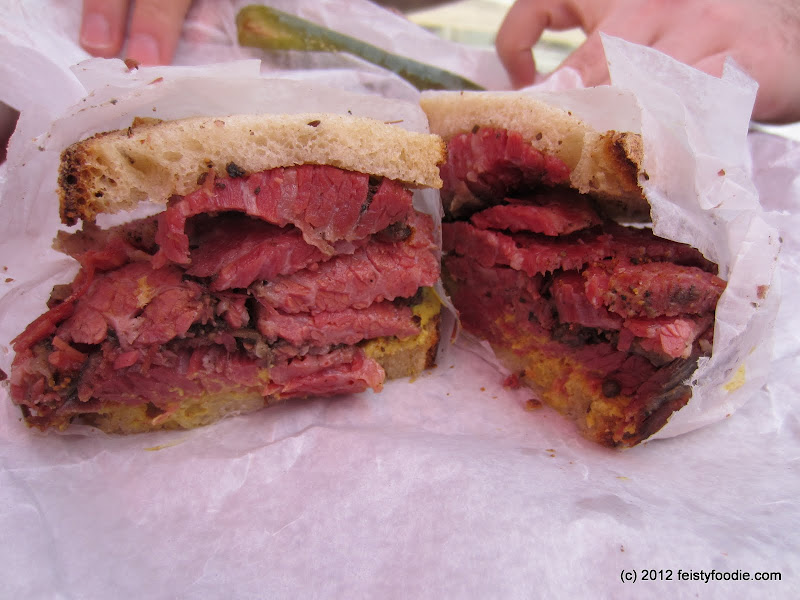 We decided to visit one more stand to get something to go with our sandwiches. Arancini Bros. called our names with their unique rice balls. They offer a half dozen different flavors of rice balls each day for $4 each. Again not cheap, but worth a try for baseball-size globes of deliciousness. I heard about them before, but also had not visited their Brooklyn location.

We got the Nero di Seppa, which was squid ink risotto and spicy shrimp. They earned a lot of points for creativity. It was very good. The rice was cooked perfectly although not necessarily full of squid ink flavor. The shrimp added a nice sweetness to each bite. I was quite impressed by how thin the outside coating was since the ball held together quite well. 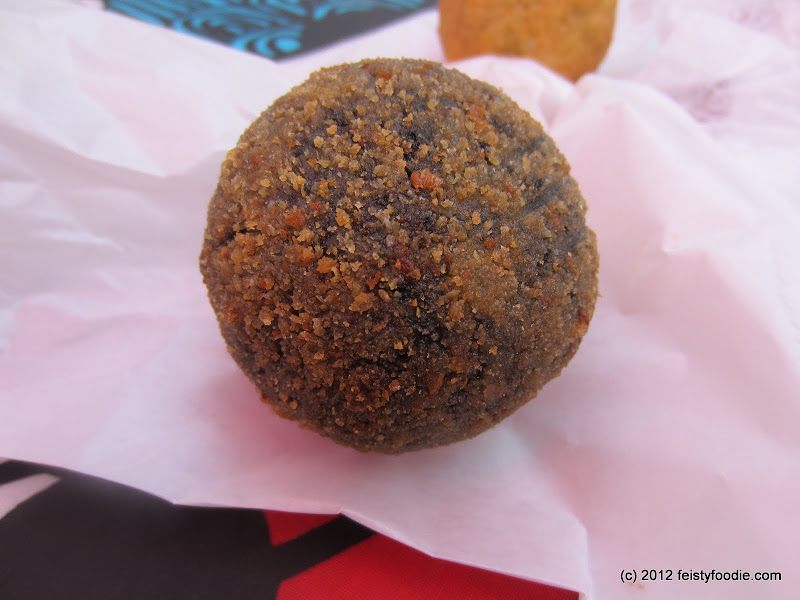 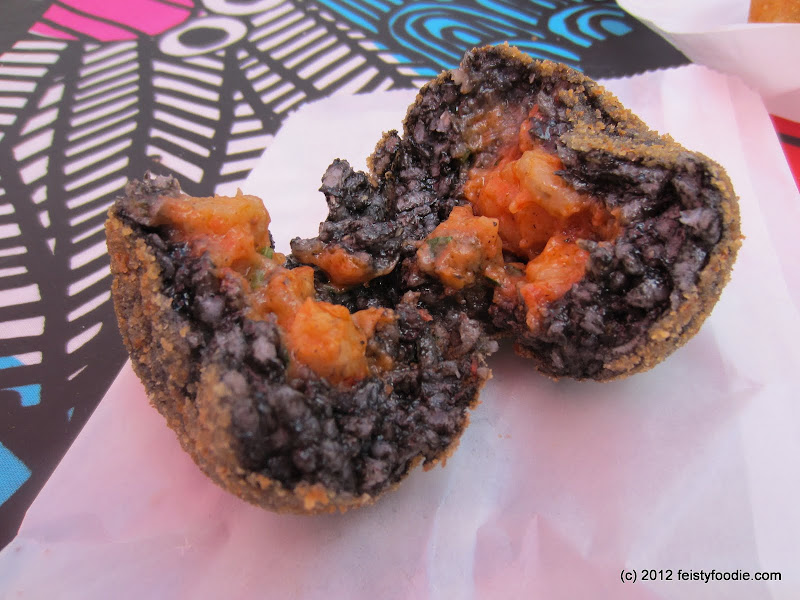 The other ball we got was the Roasted Corn Jalapeno. It was also very good and packed with cheese. After splitting it in half, it was quite evident how much gooey cheese was in it. The jalapeno was a bit muted since I think they want to try to please all palates, but added enough heat to know it was there. 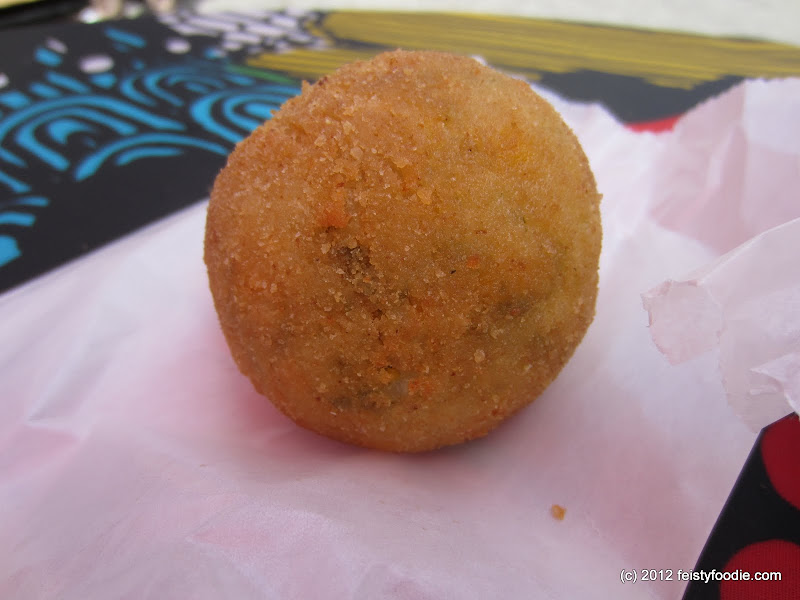 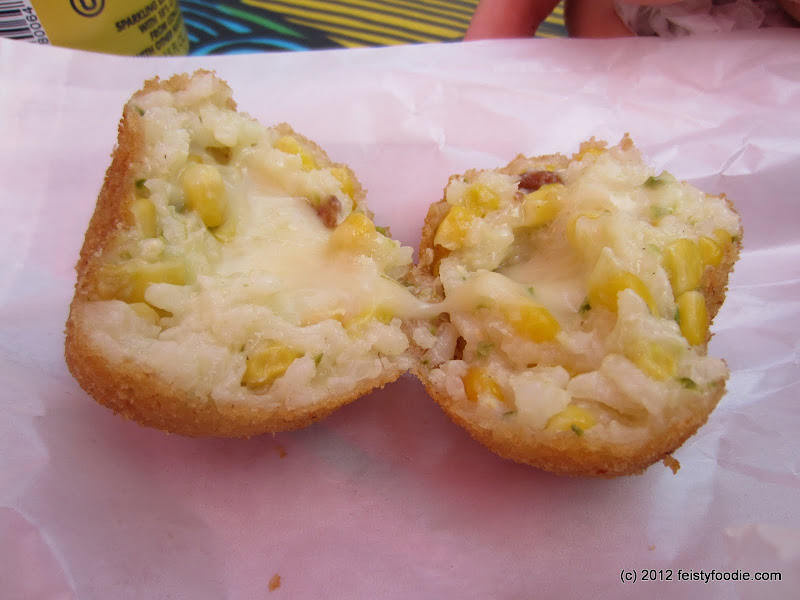 All in all, we were very pleased with the latest version of Madison Square Eats. It didn’t look like that much food, but once we dug into those rice balls, they hit us like a brick wall, but in a good way. When we return, it will be hard to not visit some of those same booths. Good thing MSE is around until the end of the month and open everyday until 9 pm. What are you waiting for? Go now!