One chilly March Saturday, I headed over to the American Museum of Natural History to check out this really cool exhibit – Beyond Planet Earth: The Future of Space Exploration. It was a really interesting exhibit, and if you’re into space stuff, I highly recommend it – though do be warned that this is a separate ticket cost from the museum itself, though admission to the museum is included. I think it was $20 a person, which may not be worth it to you if you’re not THAT into space (we didn’t really walk around the museum too much afterwards; the exhibit itself took about 2-3 hours to see in entirety).

Before we did that, though, we had to fuel up for walking around, right? So I picked Isabella’s for its proximity to the museum (okay, that’s a lie; I didn’t realize just HOW close it was when I picked it, but it is right across from the southern flank of the museum). 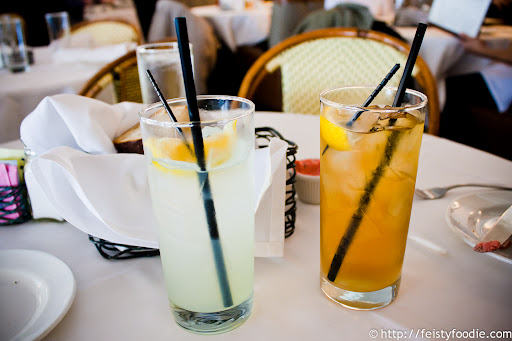 A glass of the Bella Vita on the left for me (sparkling basil-lavender lemonade) and iced tea for DLS on the right. I love sparkling drinks, so it was a no-brainer; unfortunately, the basil and lavender were both very faint, though I would rather that than an overabundance of lavender. 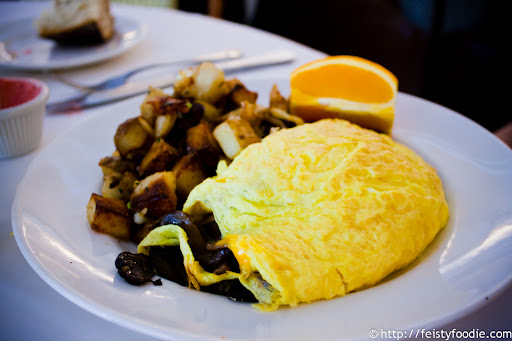 DLS chose the mushroom omelet – apparently he loves mushrooms – and I know he really liked it because he kept telling me try some. The mushrooms were tender and swathed in a perfectly cooked blanket of egg, a slight cheese touch to bring it all together. He was quite happy with his dish. 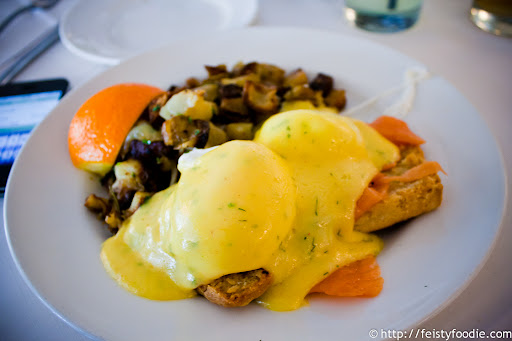 Surprising exactly no one, I chose the smoked salmon benedict, one of my absolute favorite brunch dishes (mostly because it’s unlikely I’ll make this at home); the lemony Hollandaise mixed with the perfectly poached eggs, running over the smoky salmon and the crisp buttermilk biscuits… just fantastic. I was clutching my stomach in pain by the time I had to call it quits, and I wanted to keep going, it was so good. The potatoes were also great – seasoned strongly, with enough flavor to make anyone forgo ketchup seeking… just a great brunch pre-museum, without question.

I should note that though I failed to photograph it, the bread basket came with this lemon poppyseed pound cake that was addicting, and I had trouble not eating it all and ruining my appetite for the meal ahead. It came with a flavored whipped butter as well that we both enjoyed as well… The bread basket alone was simply fantastic.

Yvo says:  I really enjoyed my brunch at Isabella’s, and would not hesitate to suggest a repeat visit – though we didn’t have to wait this time, I’ve heard that the wait times can be a bit excessive at times. Service was pleasant, and prices were in line with what I expect to pay for brunch – especially in that area.  Yum!
recommended brunch