Everyone has one of those restaurants near their apartment that they walk by all of the time, but never actually have gone to. Barbounia, a couple blocks north of Union Square, is one of those restaurants. In the past when I have walked by, it appeared to be one of those big box restaurants that would not be out of place in the Meatpacking District instead of Gramercy. It wasn’t until recently that our friend, KR said that they have a great brunch that we should check out. As part of a belated birthday gift, KR treated CT to brunch and I was able to join too.

Fortunately, we had a reservation because the place was pretty busy for a random Sunday. They offer all you can drink champagne cocktails for $18 but we passed since we were still recovering from the dinner at Aunt B’s the night before. The noise level was pretty high in the restaurant which also did not help with our recovery. The space must have had at least 20 foot ceilings which just amplified all the sound. The music was turned up pretty high, which made everyone just talk even louder. Worse yet, there were a couple of birthdays and they blasted Happy Birthday music even louder when the servers went over to those tables.

KR recommended we share some meze. They had five listed which you could order individual for $8 on average or three for $17.50. She said the spicy feta was a must have. We also got
the taramousalata and roasted eggplant. I love feta and enjoyed this preparation a lot especially because of the amount of heat it had. I am used to more firm feta, but fortunately this version was a lot more spreadable. The taramousalata was fishy and salty, but in a good way. I passed on the roasted eggplant. It didn’t look like very big portions but we were all quite happy with it and actually left some. 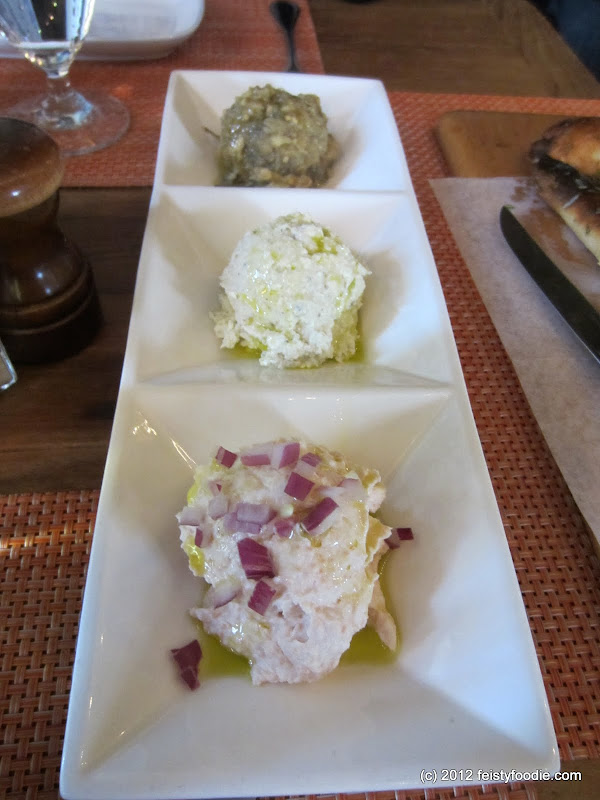 The vessel used to eat up those delicious meze was some fresh baked bread. It was nice and crispy on the outside and fluffy on the inside. I would have gone without the drizzle of olive oil on top, which just made it greasy. KR said they would bring another “loaf” if requested, free of charge. We held back on doing this though especially since our entrees would be out soon. 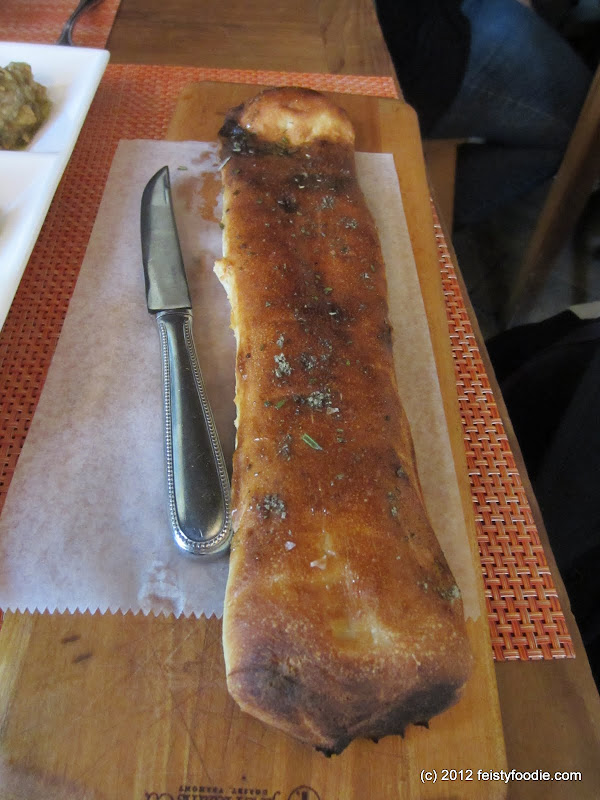 KR got the Lamb Kebab Pita ($15.95) with tahini, tomato-cucumber salad, & zhoug. She substituted a salad instead of fries, so healthy! She mentioned she had this on a previous visit and liked it so much that she had to order it again. 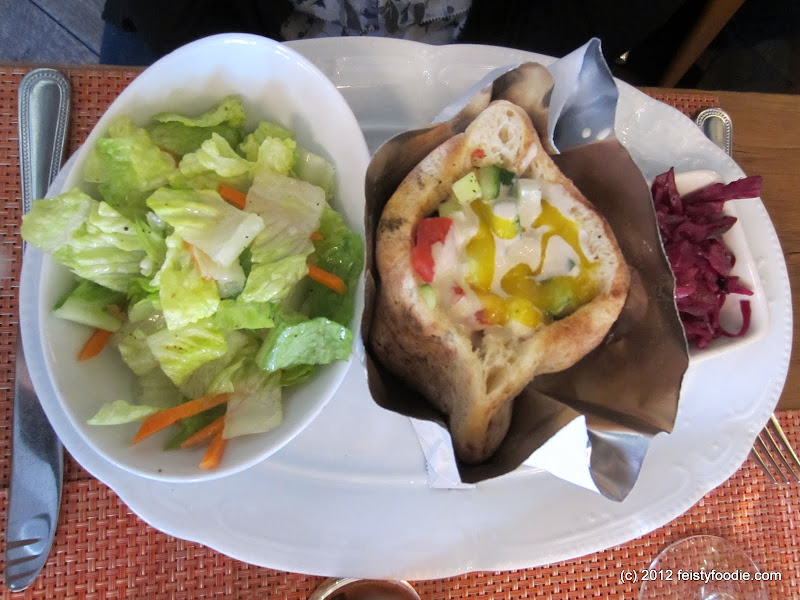 CT and I were both in an egg mood and were intrigued by their baked egg dishes.

CT got the Turkish Eggs ($14.95). Spinach, ground lamb, chickpeas, sunny-side up eggs & tahini served in skillet. I’m pretty sure she left an empty skillet which meant she like it. 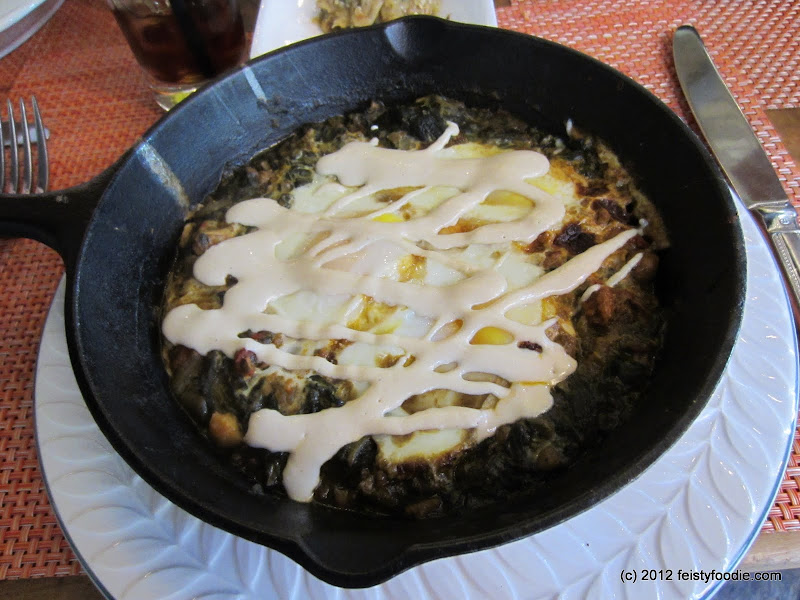 I had the Greek Eggs ($15.95). Fried haloumi & tomatoes with sunny-side up eggs & sumac served in skillet. This was cooked very well as evidenced by the runny yolks, however it was a tad underseasoned. The haloumi was very similar to the firm feta I am used to and added a little saltiness, so I think the Chef was being cautious by not adding any more salt on top of that. I quickly fixed it with the salt and pepper on the table. I liked the baked tomatoes too. They get super juicy when baked. 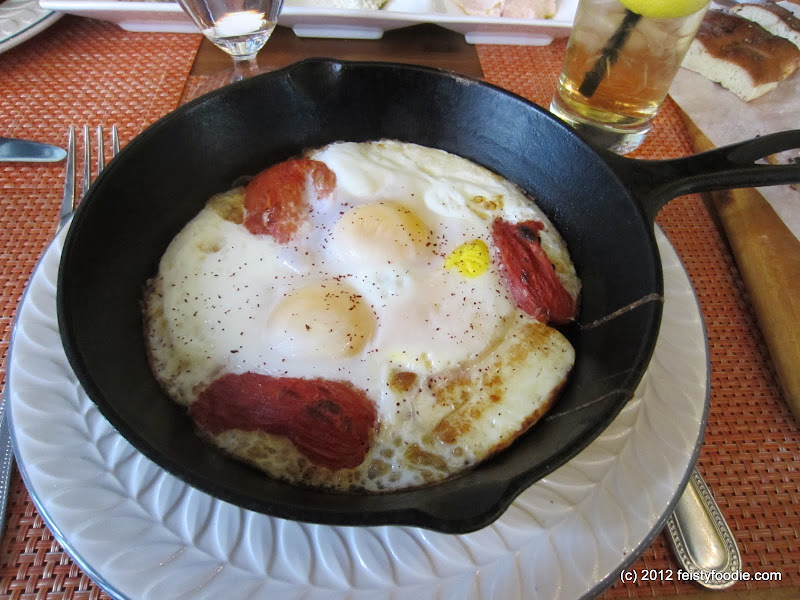 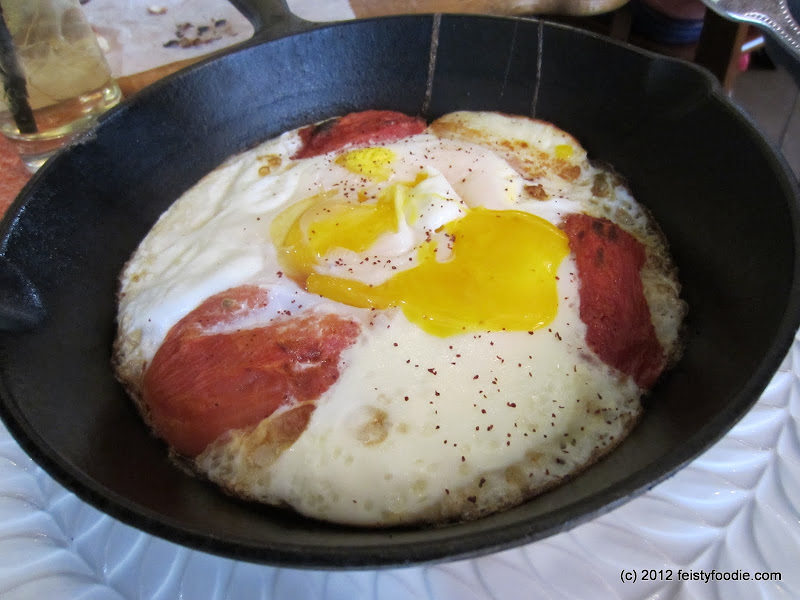 All in all, the food was pretty good. However, the atmosphere had a lot to be desired unless you enjoy going practically deaf during your meal. I would hesitate to go back for dinner since it could potentially be even louder. Thanks KR for finally getting me to eat there.