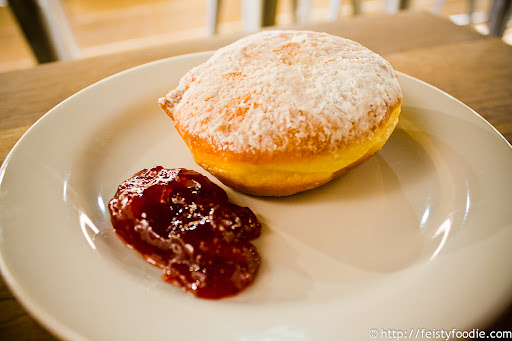 I admit it – I’m a total dork. After a bit of wandering around the West Village, DLS wanted a snack before dinner. We walked by Landbrot and decided to go inside – a German bakery? I don’t think I’ve seen too many of those around the city yet… and there was an awesome beer bar along the right hand side too! Of course, DLS doesn’t drink, and I’m currently involved in a program that requires you not drink, so we bypassed that and went straight to the baked goods case and ogled the treats.

When DLS decided he wanted the berliner, I couldn’t help but say in my best JFK impression (which isn’t very good), “Ich bin ein berliner!”  To be met with a blank stare despite this being one of JFK’s most famous speeches was disconcerting to say the least! (I’m not used to knowing things that DLS doesn’t, unless it’s food-related.)

In any case, the unfilled jelly donut was warmed up for us, and we brought it upstairs to this really neat nook that overlooked the rest of the place to eat it in relative privacy. DLS liked it very much.

I definitely intend to go back and sample more goodies – pretzels! German bread! So many goodies!

Check it out if you can.