As previously mentioned, my Mom got us three Restaurant.com certificates over the holidays. Although, the site’s offerings were a little lacking, we found a couple of restaurants that did pique our interest. We already redeemed certificates at Sa Aming Nayon and Moonstruck Diner, which both worked out well and left us with happy tummies. For the last certificate, I found a hidden gem for Yerba Buena in the East Village. You may remember we had a great Father’s Day brunch at their sister restaurant, Yerba Buena Perry.

After arriving, we were warmly greeted by the hosts and promptly seated in the tiny restaurant. I would recommend making reservations since the restaurant filled up quickly shortly after we were seated, a little past seven on a Saturday night. Soon after, our waiter came over with the menus. He was also extremely friendly. I presented him with a printout of the certificate as was required with this deal. He told us that he didn’t think the restaurant accepted these anymore, let alone on a Saturday night, but would check with the Manager. I read the certificate a couple of times before arriving to check that there were no weekend restrictions. Since, there were none listed, I was a little perturbed that we faced an issue with the waiter. Fortunately, when he came back he informed us that the Manager agreed to let us use the certificate. It was a relief, but I was worried that this incident could lead to terrible service from the staff. I ended up being worried for naught as the service was excellent throughout the meal. The waiter even offered to bring CT a new cocktail in case the one she ordered was not to hear liking.

CT says: I was questioning a few ingredients in the cocktails, since I didn’t want something too sweet. The waiter was very patient with answering my questions, and nice enough to check up after it was served that it was, indeed, what I wanted. It was!

We started off with the Ceviche Mixto ($14). It had shrimp, octopus, clams, red onion, rocoto (South American chili pepper), cilantro, maiz cancha, and lime juice. As ceviche aficionados (earned through our travels in Panama), we can say it was a very good preparation. The octopus(my favorite) was extremely tender with hardly any of the usual chew associated with it. Maiz cancha was giant corn kernels, which were good and quite different from the corn we usually get in NYC. There was so much going on in the bowl that we needed to get a close up shot too. 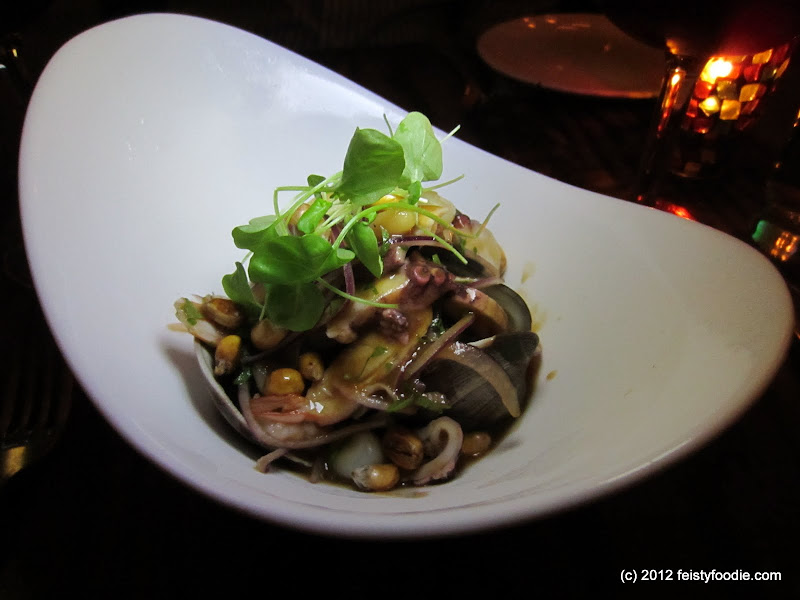 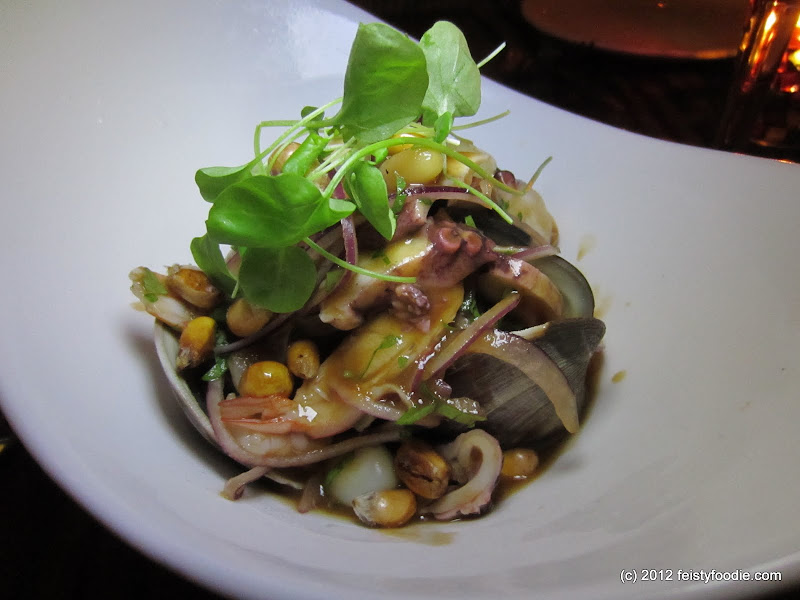 Since we got guacamole at their location in the East Village, we decided to try something different. Picada ($9). It was a little basket of fried awesomeness with yucca, tostones, chorizo, chicharron and a spicy rocoto salsa. The picture doesn’t do it justice at all. The yucca was made into little balls that were quite light and airy. I love the salty, crunchiness of tostones as opposed to their sweeter and mushier maduros counterparts. To the left of the yucca was one of a couple chunks of deep fried pork belly. It was pretty great; how could it not be? However, the true star of the dish was the fried chorizo bites. They were super flavorful with plenty of that spicy chorizo flavor, that is like no other sausage. I am glad we decided to try this instead of going for something we already had before. 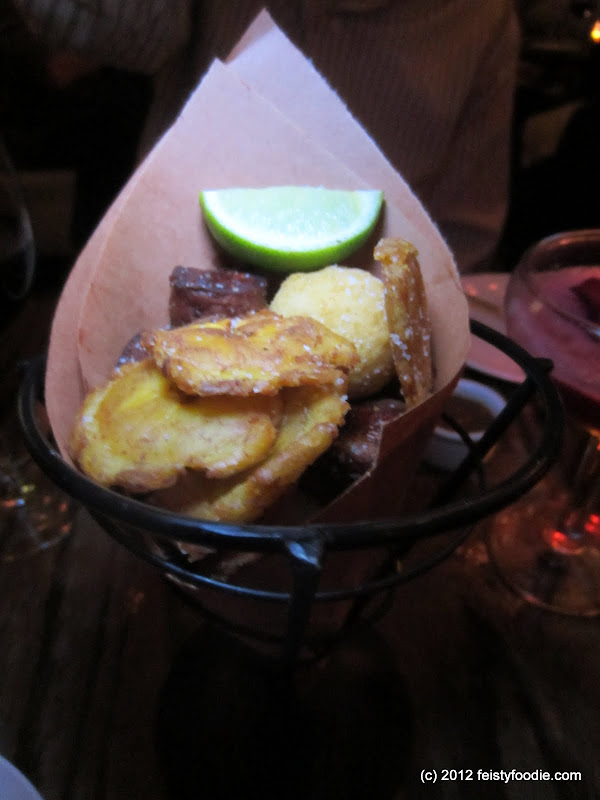 The menu was quite small, but that didn’t make it any easier to pick what we would have for dinner. Still, we did decide it would be more reasonable to share one of the smaller plates and one entree.

For the entree, we chose the Lechon ($24). It was suckling pig with yucca puree, habanero mojo de ajo and chicharron. The pictures don’t do this dish justice because it was a HUGE portion. The pork was very juicy with plenty of intense flavors. Crispy pork skin mixed in brought a good textural contrast too. To put it simply, it was one of the best preparations of pulled pork I have ever had. The habanero was subtle, but built up slowly to give that nice back of the throat heat. I was surprised by how much pork was on the plate. It had to have been at least three normal servings worth. I couldn’t stop eating it and kept going long after CT threw in the towel. It was quite reasonably priced for the amount of food it was and I think I willhave to order it again on the next visit. 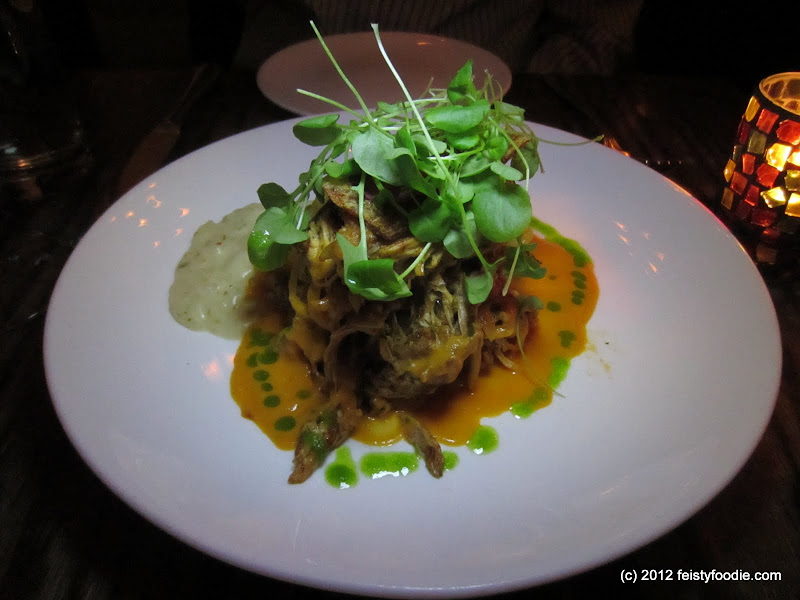 So big, you need to see it from both sides. 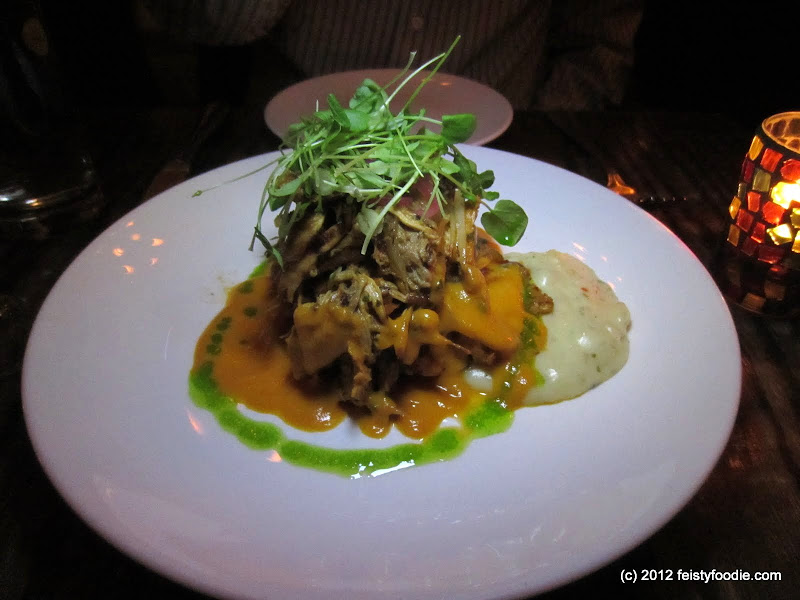 CT asked for some hot sauce on the side, as she usually does at most restaurants. Here was the great homemade hot sauce that was very spicy. I was pretty happy with the intense spice levels already in the dishes, so passed on adding extra. 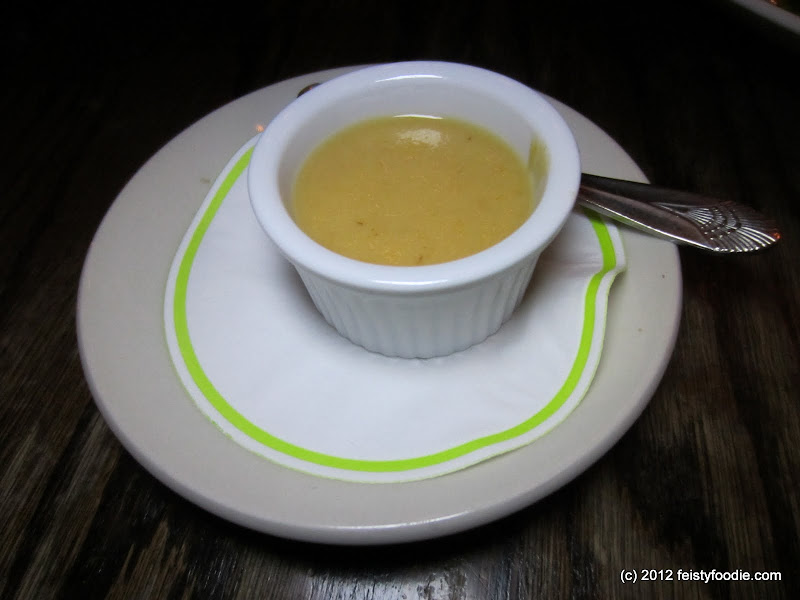 For the small dish, CT decided we should try the Tallarin Saltado ($14). It was oxtail and noodles with scallions, piquillos, peas and a poached egg. I haven’t seen pasta dishes on that many Latin menus, so I thought it was quite a risk. Boy was I wrong. It was awesome. The egg was perfectly poached as you can see by its shape and runnyness. The oxtail was super tender, almost like short rib with some more of that slowly building heat from the peppers. The dish ended up being somewhat of a take on a carbonara. CT really hit the jackpot with this. I would highly recommend it. 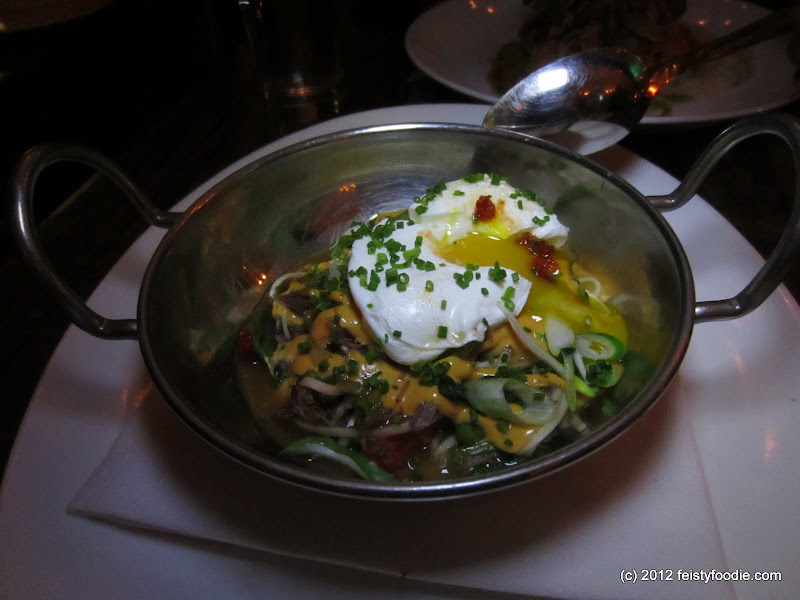 All in all, it was a great meal with all aspects being top notch. We were very happy with all of the dishes and the level of service. Although there was a little hiccup with the Restaurant.com certificate, it was quickly remedied. It also helped that the waiter was very generous with the table pours of the two glasses of wine that I ordered. He actually forgot to put the second glass on the bill, but I reminded him since the restaurant deserved to be paid for it and I believe in karma. I would be interested to see if their West Village location has such an impeccable dinner service too. Definitely check out Yerba Buena, you won’t be disappointed!