Even with a reservation, we had to wait for a table since the hostess informed us that the restaurant was “slammed” with BBE redeemers. As this was at least the third time offering a deal through BBE, it looks like it is a win-win for all parties involved. We ended up being seated in the back room, which we hadn’t noticed on our previous visit. This was a welcomed surprise as there was a lot more room to spread out, unlike in the front part of the restaurant.

We started off with some oysters. I only ordered three, since I wanted to get an appetizer too, while the ladies each got four. They have a selection of 5 or 6 oysters from the West Coast and East Coast priced from $2.50 to $3 each.

I chose three from the East Coast, but don’t remember the names. They were super fresh with a lot of “liquor,” so I added only a little horseradish with cocktail sauce to add some heat. Quality oysters really don’t need anything added except for possibly a squeeze of lemon. I enjoy oysters a lot, but find it hard to differentiate between the varieties. They all taste good to me. 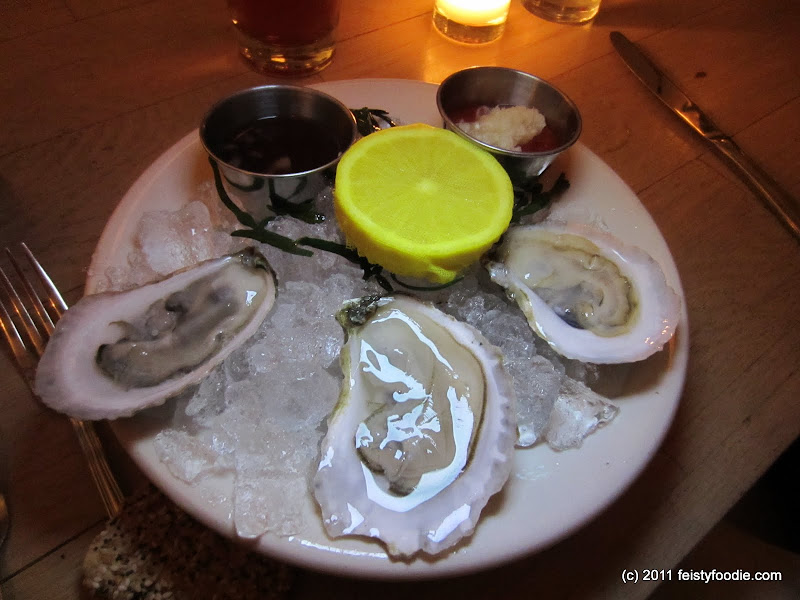 The ladies just asked the waiter for a variety, so he plated two of each for them. 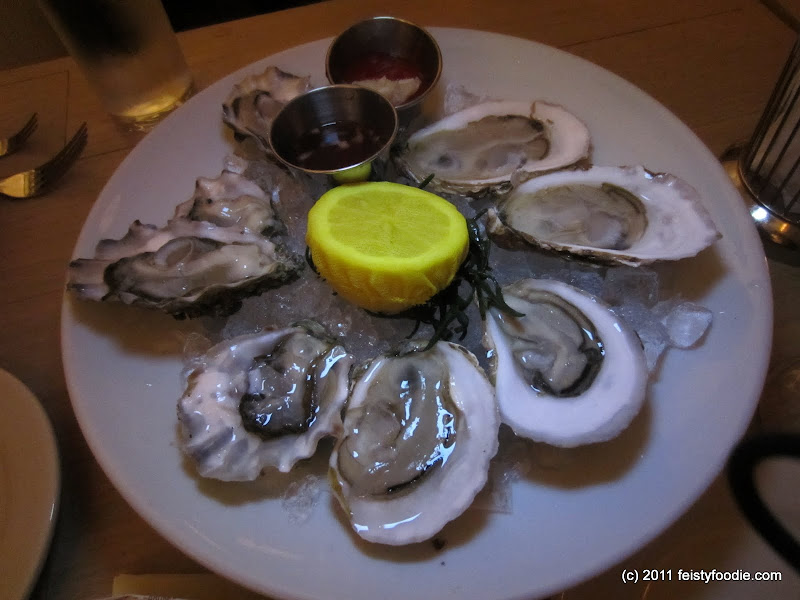 He left the ticket on the table, which CT wisely took a picture of. 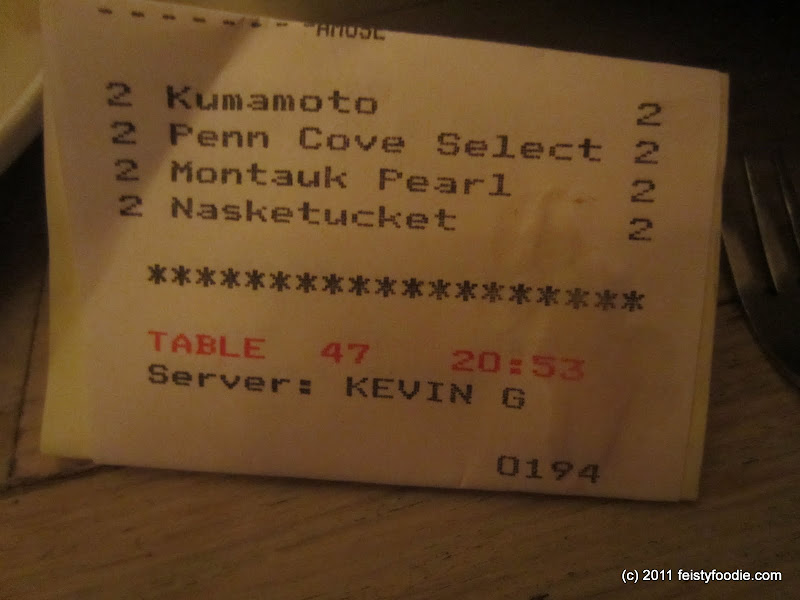 CT says: I never remember what kind of oyster I get and which I like the most, so this time I was prepared, camera and pen in hand. Fortunately, the waiter gave us a nice variation in flavors, and although I didn’t dislike any of them, I certainly had favorite. KR and I both agreed on our favorites too! (It’s probably why we’re friends… our taste in oysters!) First place: Kumamoto, followed by the Montauk Pearl, Penn Cove Select and lastly the Nasketucket. I couldn’t tell you what made me like them more, but I just did.

I decided to start with the Seared Calamari with shiitake, cremini, feta, frisee ($12), which I shared with the ladies since they didn’t want their own appetizers. It was much better than the octopus & feta salad I had at The Mermaid Inn last time. The calamari was nice and tender with a good mix of rings and tentacles. Although the salad was a tad overdressed, the punch of vinegar was good for masking the mushrooms, hehe. I love feta and it has become my favorite cheese for salads. The saltiness of the cheese was all of the seasoning the dish needed. 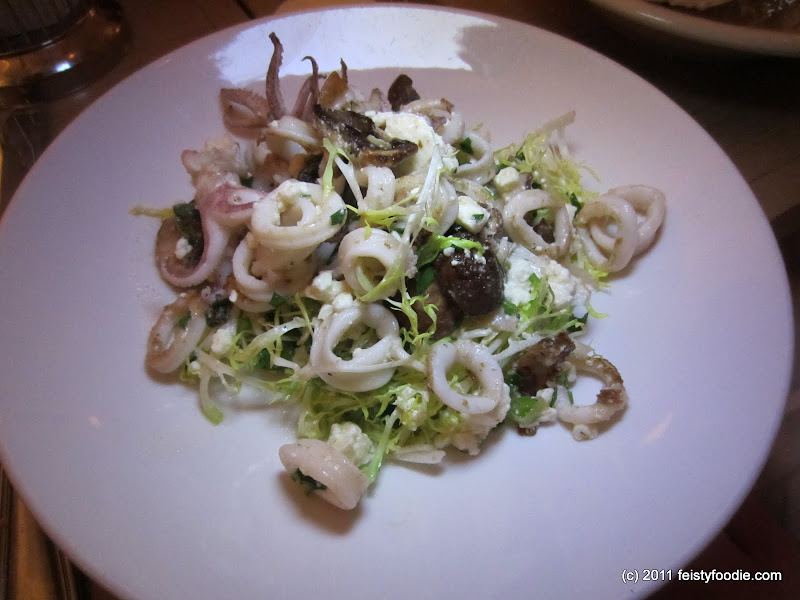 Since everything was 30% off, KR splurged and ordered the Lobster Sandwich on griddled brioche roll with Old Bay fries ($26). She requested the bread it not to be griddled, so it’s not your eyes deceiving you. We had never seen a lobster “roll” served on basically a hamburger bun before. As you can see the meat to bread ratio was way off. KR was disappointed with the lobster too. Fortunately, the Old Bay fries were nice and crispy with just the right amount of seasoning. 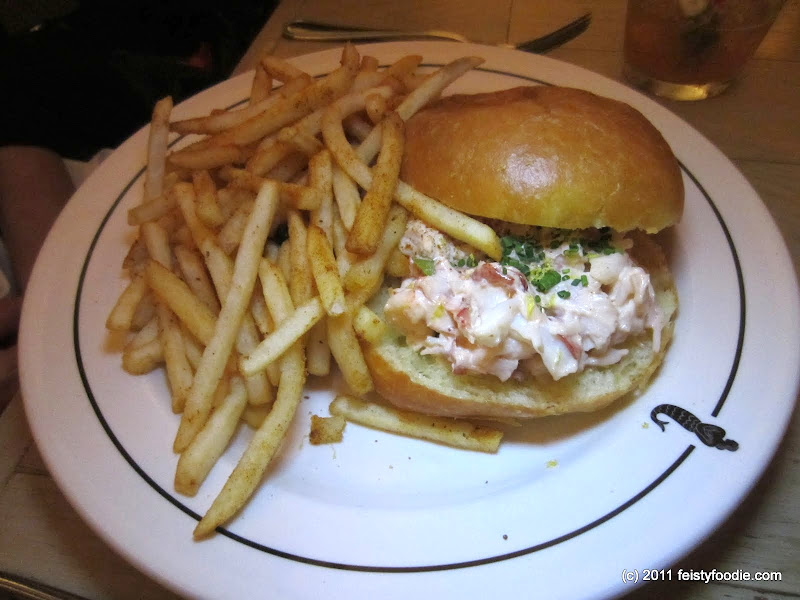 CT couldn’t resist and ordered two fish tacos again ($7 each). They came with ancho, pico de gallo and cilantro crema. I am pretty sure they were prepared slightly differently from the last time, but they were just as tasty. 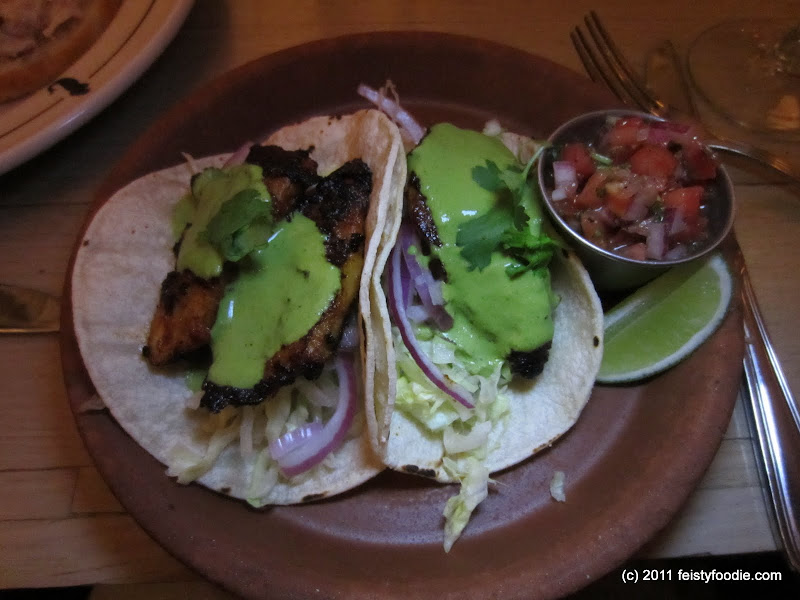 CT says: Light and delicious, just as expected. I really can’t help it… I love me some fish tacos! I was actually going to splurge and I try the po’ boy this trip, but unfortunately it wasn’t on the menu anymore (at least not that night). No matter though, these always please.

I chose the Blackened Catfish with hush puppies, collard greens and crawfish butter ($22). I don’t eat catfish very often, so I was taking a little bit of risk with this choice. It paid off. The fish was perfectly cooked, not dried out at all. There was a plethora of crawfish on top, which was a welcome surprise. The greens underneath were only sauteed lightly, so it really lent itself to the term “roughage” but I ate them anyway. The hush puppies were nice and light and the perfect vessel to sop up some of that delicious sauce. I would order this again. 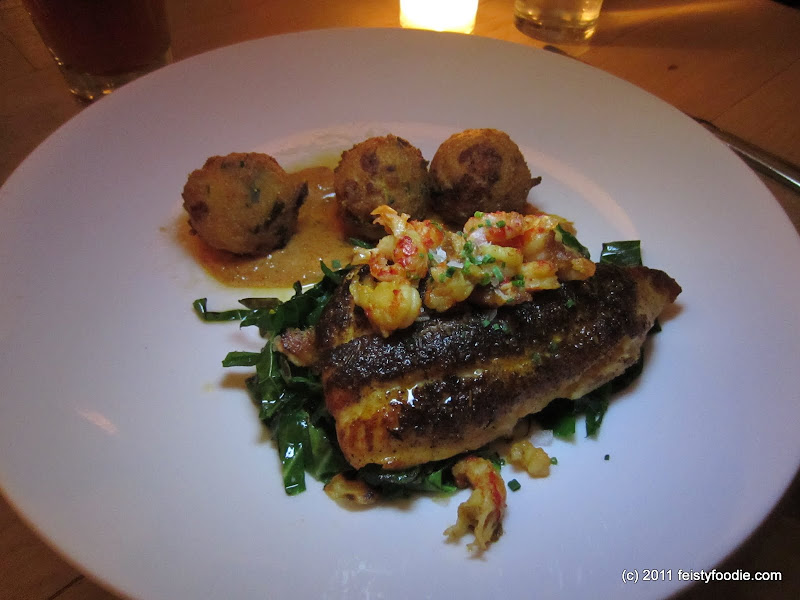 CT says: I did have a bit of food envy here, as TT definitely won best dish. The catfish was so well cooked and seasoned, and the hush puppies were awesome! I considered ordering a side order for myself, but practiced some self control and munched on a few of KR’s fries instead.

After we were done, we were presented with the customary espresso cup of chocolate pudding and a fortune fish. 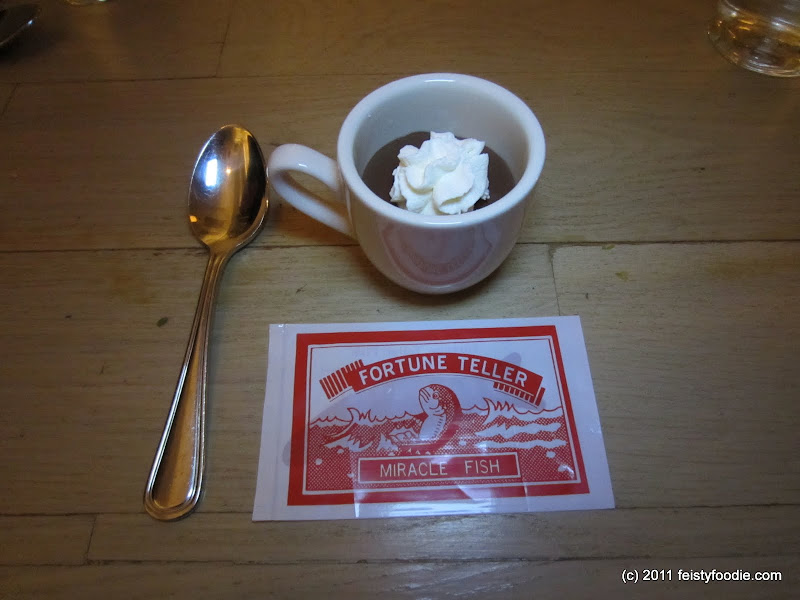 All in all, we were all pretty happy with our meal at Mermaid Oyster Bar even though KR’s lobster sandwich was disappointing. This location is hands down the best of the group of restaurants. Although Blackboard Eats has slowed down in the number of appealing deals, they still come out with the occasional good one like this.