You know what an awesome friend is?  An awesome friend is one who, when you casually mention that you really want to go see Spiderman: Turn Off the Dark, remembers this as your birthday approaches and gets tickets for you, even though she wants nothing more than to pretend the show doesn’t exist, and has absolutely no desire to go see it whatsoever.  Oh – hi, that awesome friend is me… yes, for DLS‘s birthday, I got tickets to see Spiderman.  And it was every bit as bad as I thought it might be – maybe even worse.  Friends, it was easily the worst show I’ve ever watched.  I realize I don’t talk about my love of theater here often (or ever?), but I used to go at least once a month (mostly because I thought I was going to move out of NYC shortly, and when people ask me why I love NYC so much, ‘the theater’ was always my first answer – and then I realized I didn’t really take advantage of it… so I started).  In any case, boy I’m chatty today!, Spiderman was the worst show I’ve ever seen.  EVER.  And some of them have been super amateur hour… this just was AWFUL.

But I couldn’t post about this here except… of course we ate before the show.  I’d wanted to go to Marseille, but surprisingly it was completely packed and had a 45 minute wait.  As did every single other place we tried.  It wasn’t looking too promising until we stumbled into 44 SW, which had a table immediately for us, and a menu that we both were fine with.  I informed our server that we had a show to catch and she didn’t seem phased, though our food took a while to come.  (Sorry for the super blurry photos, I used the point & shoot, and we were hungry and in a rush so I just snapped a photo each and let it go at that.) 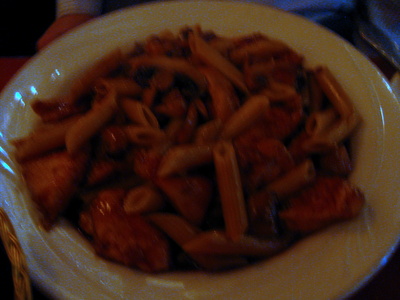 DLS chose the chicken marsala, which surprised me by coming sliced up and tossed with pasta.  He liked it well enough though. 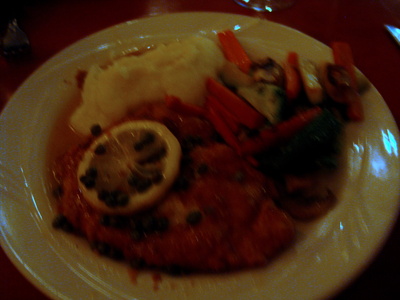 I chose the chicken francaise, which had mashed potatoes and veggies.  I thought it was decent, not overcooked chicken, lemony, and perfectly tasty.

Yvo says: Though the food took a little bit to come out (like long enough that we were both super concerned), in the end the timing was fine and the food was tasty.  I wouldn’t go out of my way to dine here, but if you’re in the area and need a quick bite before a show… this will totally suffice.  But please don’t go see Spiderman, that was totally horrible and a waste of money, ugh.
middle of the road