After an hour looking at puppies at the North Shore Animal League, DLS told me he was starving because he hadn’t eaten before meeting me in Queens (so I could drive to LI for the puppies!).  So I thought for a split second and remembered that we were in Port Washington, where once upon a long long time ago, FeistySis took our father, mother and I to a couple of Mediterranean restaurants.  Obviously I know this was ages ago because my father was there… in any case, I said, “I know of two places nearby that are pretty good – I haven’t been in over 11 years though,” and had him pick either Fish Kebab or Shish Kebab.

And that’s how we wound up at Fish Kebab. 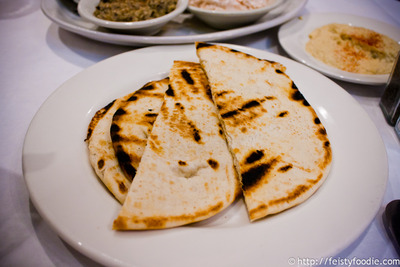 Since I’d been eating at home right before he arrived, I wasn’t all that hungry and decided to just choose a bunch of things to nibble on.  Pita came with our mezze platter. 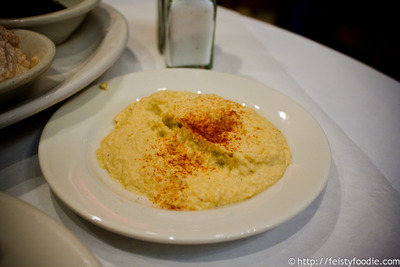 Hummus, which was perfectly tasty but nothing mind blowing (I LOVE hummus, and have a favorite brand and all). 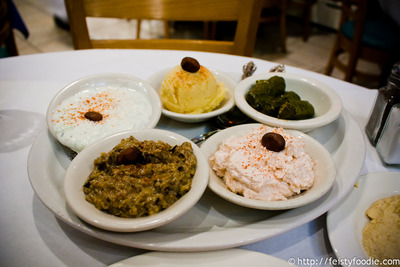 The mezzes: from the front left clockwise, babaghanoush, tzatziki, garlic-potatoes, stuffed grape leaves, and … mmm… taramasalata.  I’m not a big eggplant person, so that dish was mostly ignored by me, but the tzatziki was very creamy and tangy… the potatoes were a bit of hit or miss with me, a little too stiff to be a dip and a little odd eating just like mashed potatoes.  The stuffed grape leaves were okay, and the taramasalata… oh, my.  I won’t say it’s the best ever, but I really liked how fishy this dip was, you would not mistake this for anything but a cod roe dip.  So good – I couldn’t stop stuffing this in my mouth.  We requested more pita, a request that was met happily. 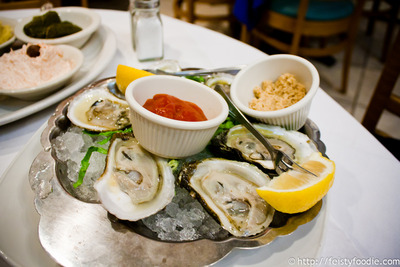 We also ordered a half dozen raw oysters because I was just feeling it.  I enjoyed these – super fresh, and super tasty, not like the ones I’d had earlier.  Shucked properly too, no need to pull them from the shell… ahhh. 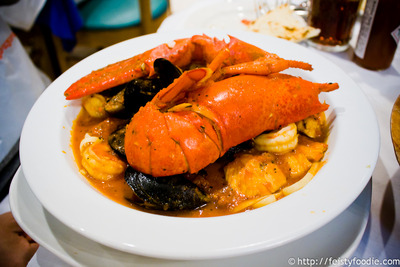 DLS ordered the seafood pasta, which sounded glorious.  Both of us assumed it would be mostly seafood tossed with the pasta, maybe clams and/or mussels in the shell, but when the server came over to put a bib on DLS, we both realized how wrong we were.  I took a couple of cute photos of him wearing the bib, but I don’t think he’d appreciate me putting them on the blog… so I won’t, boo 😛  In any case, he seemed to really enjoy his pasta, though I declined to try any – half a lobster, mussels, shrimp, I think even scallops in there… maybe he’ll (finally!) comment and share his thoughts on something? 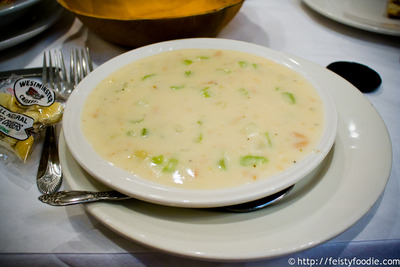 As I said, I wasn’t particularly hungry, so I chose just the New England clam chowder.  The bowl was huge! and quite tasty.  Very smoothly creamy – mine sometimes comes out a bit lumpy, probably from my tendency to brown my roux, filled with lots of veggies and big chunks of clam.  I really enjoyed my soup, and didn’t feel any remorse at being unable to order a more substantial meal – I thoroughly enjoyed everything  I ate!

Yvo says: I’d initially worried this place wouldn’t still be there since it’s been literally over 11 years since I’d gone, but it’s clear why this place has survived the test of time: fresh seafood, a wonderful staff and just good food.  You can’t beat that.  The owners have a few places – this, the Shish Kebab place, a little market across the street, and a bunch of places that all sell this type of stuff – the little market sells the mezze we ordered individually by the pound, and even little mini picnic packs to take to the lake nearby to eat a nice picnic lunch… yes, we talked about that, you know how goofy I am!… Love how adorable it is.  Full disclosure: the same owners have or had another restaurant in the Source Mall, which is where I threw FeistySis’s baby shower for her first child… and I loved it, they were easy to work with, the price was awesome and the food was good (served buffet style), just a great overall place.
highly recommended if you’re in the area