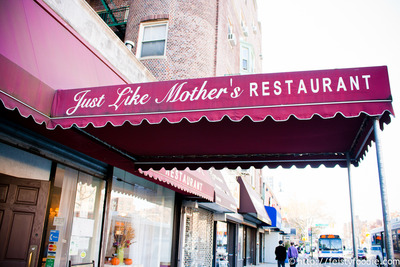 When I first moved back to Forest Hills, I did an intense search to find what places I should visit in my neighborhood.  I found a plethora of places that I’ve explored casually over the years, but one such place that eluded me until now was Just Like Mother’s.  I’m not sure why, but the address was hard for me to find at first, and then I just simply forgot about the place.  However, when my godbro recently called me, lost in Forest Hills and unable to find his way to his appointment, I looked up the address on Google Maps, directed him to where he needed to go, and noticed Just Like Mother’s on the map.  So after he was done, I insisted we go here for lunch… and late into the lunch hours on a Monday, the place was pretty empty. 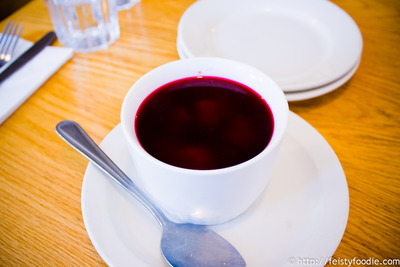 We went the same day my post about Eisenberg‘s went up, so I’d spent the morning thinking about borscht and how it’s served hot.  On the menu was white borscht and red borscht with meat dumplings.  I chose the red one, being used to that, but I will go back to try the other one… and report back. 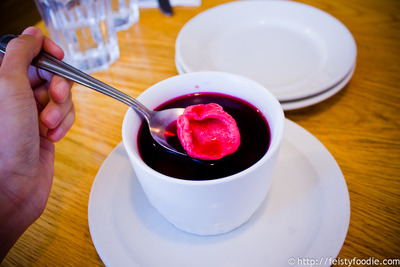 Surprisingly, the broth was completely smooth and liquid, not like blended beets but more like beets had been boiled in the water until all their flavor had leeched out.  The broth itself was slightly tangy, like vinegary, with a mild beet taste to it.  Interesting. 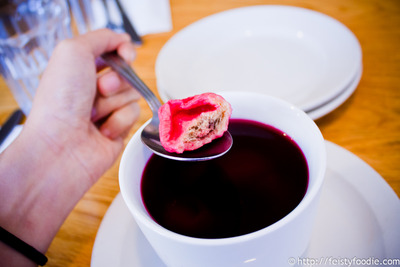 The meat dumplings were OK, nothing special, and stained bright red by the broth.  I could do without – in fact, I will definitely try the white borscht next time.  (And yes, this one was served hot.) 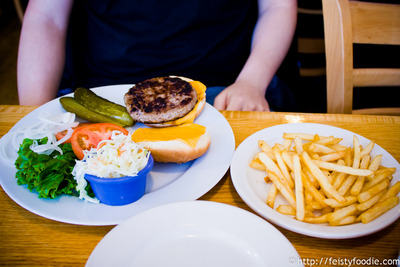 JZ decided to splurge calorically and get the burger platter.  He said it was really good, and polished it off quickly so I’ll take his word for it. 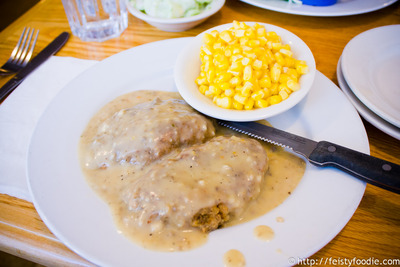 Given that this was an Eastern European menu, I thought I should order stuffed cabbage (which I like) or something similar, but once I saw meatloaf on the menu, I got it stuck in my head that I wanted that, and there was no talking me out of it.  My one concession was to pick mushroom gravy over meat gravy. 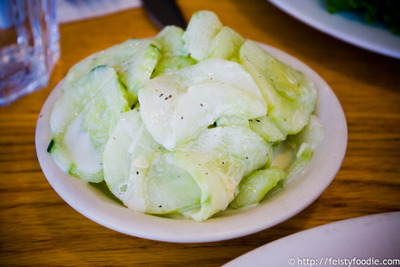 For one of my sides, I chose cucumber salad, which was nice and pickly, though a little too much watery mayo for my tastes.  I couldn’t stop picking at this and had to finally throw my fork on the floor to stop me from eating more.  Okay, I didn’t really do that, but it’s one of the ways I stop myself from eating so much – remove the means by which to do so!  Ahem, anyway.  My other side was simple corn, which was clearly canned, and tasted fine once I’d added butter. 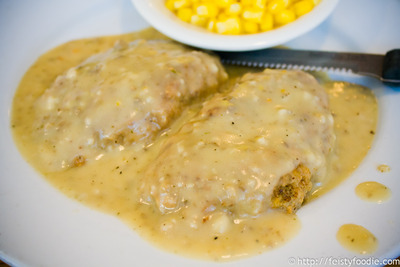 As for the meatloaf – the texture was fairly fall-apart tender, juicy, not overcooked, and actually pretty tasty.  The mushroom gravy was also really tasty, I enjoyed it a lot and I cleaned my plate.  I don’t know about “just like mother’s” – my mom hates meatloaf and my dad used to call it poor people food, so I NEVER had it growing up and still rarely ever eat it – but this was really filling and tasty, very much what I would call comfort food, rib-sticking food.  Not expensive either – $11.50 for my entree, and the soup was $5.25 (and unnecessary, I was so stuffed!).

Yvo says: I will definitely be back – I really enjoy Polish cuisine and will happily eat my way through most of the menu, there are many dishes that caught my interest but I just can’t eat that much in one sitting!  Yum!  Definitely go here if you’re in the area, looking for some hearty food in the cold winter days…
recommended

A few short weeks after the above visit, I returned with TC to Just Like Mother’s after he mentioned he likes pierogies. 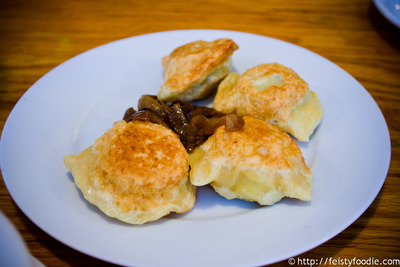 So of course our first order was pierogies, fried, two meat and two potato.  I only tried a teeny bit of each, but thought they were tasty enough.  I’m not a big pierogi person, though. 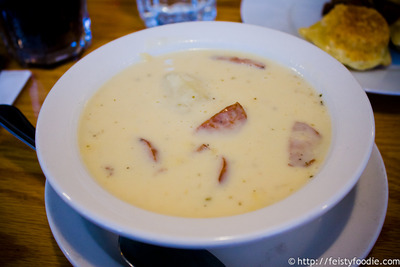 As promised, this time, I ordered the white borscht.  I was surprised when it arrived, thinking it might be red borscht mixed throughout with sour cream, but instead it was a completely creamy soup that smacked of garlic, a slight vinegary tang, and had a large potato sitting in the middle along with thin slices of kielbasa.  I really enjoyed the creaminess of this garlicky, tangy soup… and the salty bites of meat in between slurps of white soup was just perfect.  Yum!!! 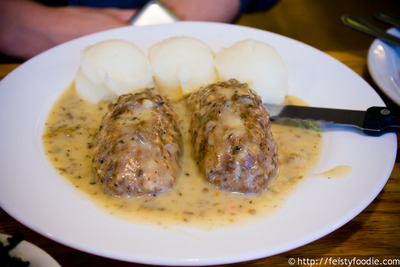 After I said I liked the meatloaf with mushroom gravy last time, TC immediately decided to order that, and liked it as well.  The mashed potatoes were consumed without comment, mostly because I forgot to ask. 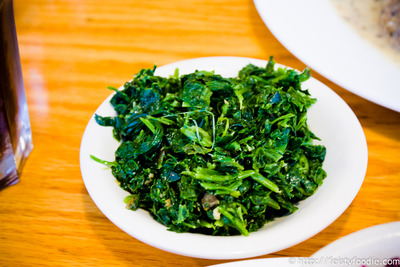 He also got a side of spinach, which was lightly lemony and chopped.  Tasty. 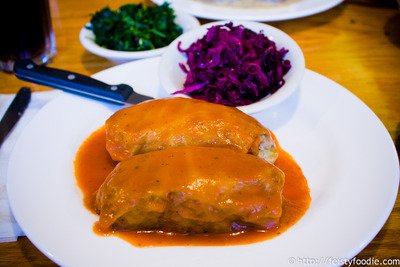 I opted this time for the stuffed cabbage, which arrived looking like kielbasa links to TC… haha. 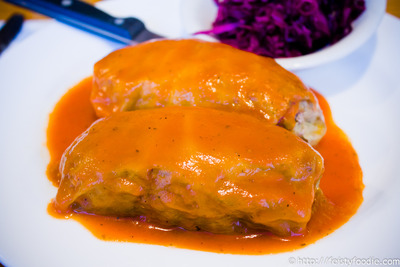 I enjoyed this – each piece with the tomato sauce, tasty, moist, and a bit of rice inside as well. 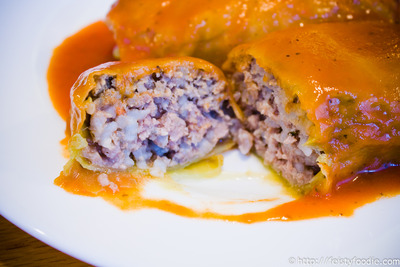 Still meaty though.  Yum.  I also had the red cabbage side, which was slightly tangy, and the cucumber salad again because I enjoyed it so much last time.

Once again, great service and delicious food.  I definitely will return to try even more food!  Yum!