On a Sunday afternoon, after indulging in lots of dim sum (post to come by TT!), we found ourselves wandering up from Chinatown to Hell’s Kitchen to watch football in a local bar – Bull Moose Saloon, to be exact.  Though I was still pretty stuffed from dim sum, Cheese and TC apparently were ready to eat again! 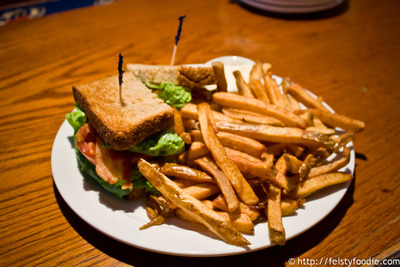 Cheese’d mentioned to me the BLT being a great deal – for $6.95, you get a decent sized sandwich with a mound of fries – and he ordered this.  He said it was good as usual (he’d ordered it before). 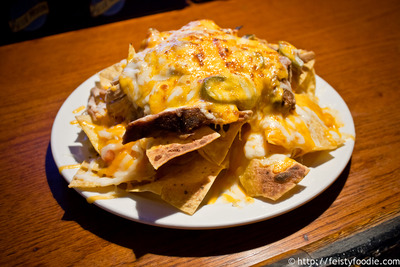 TC and I have been on a kind of nacho binge lately, so for $11.95 he ordered the Nachos Ultima with pulled pork – and there was plenty of pulled pork! – with an assortment of toppings.  I “helped” eat this (by which I mean, I pulled the plate in front of me when he looked away for a second and began eating, hahaha).  Some of the chips were burnt, but overall, a nice plate to munch while watching the games. 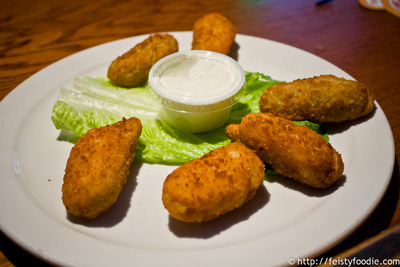 When I saw jalapeno poppers on the menu, I just had to order them.  Maybe $7.95 for 6 of them isn’t a good price, but these were fried perfectly crisp on the outside, with a nice crunch as I bit into them. 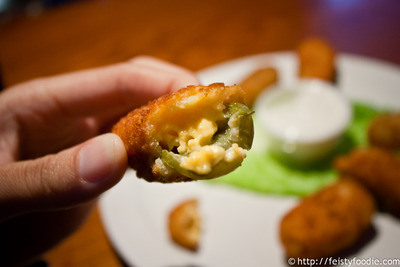 Filled with a rather mild cheddar, I enjoyed snacking on these, though I did wish there were a couple more for the price.

Yvo says: The bar didn’t get very full though we were there for a few hours watching the early football games.  Sitting at the bar, the bartender repeatedly filled my diet Coke without any comment or any grudging glares (I’ve had bartenders really dislike when I don’t drink alcohol, even if my friends were drinking) – free refills to boot! – though two of us weren’t drinking alcohol.  Awesome.  The atmosphere was casual, laidback, and the scattered patrons were chill and not douchey at all.  Things I look for in a good local bar!  I will definitely be back sooner than later to watch more football.
recommended, good bar bites with [mostly] good prices

…as I’d mentioned, I actually went back shortly for more football. 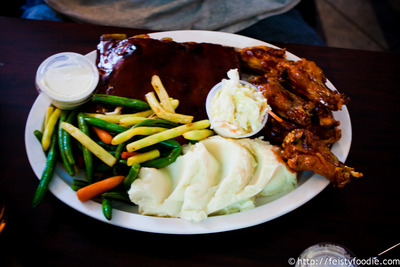 This time TC ordered a rib and wing combo platter.  He said the ribs weren’t that good and the wings were aiite – but the end result was “I’ll stick to the nachos next time” – guess the pub grub did better for him here than the real food. 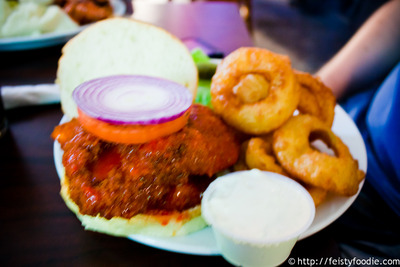 Cheese went with the buffalo chicken sandwich, which he’s had in the past and really enjoys.  I’m going to blame all the blurry photos on the fact that I’d been drinking for a while before I got to take pictures… 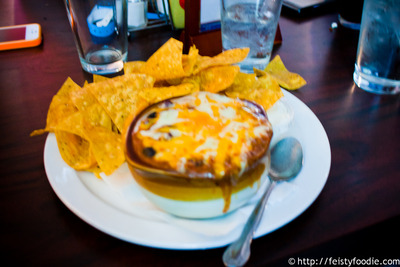 Seriously, I don’t know why every single photo from that night came out super blurry.  In any case, I wanted to try their chili, so I did.  Not enough sour cream, but this was fixed when I was finally able to flag down our slightly oblivious waitress to get some more.  A bit spicy, meaty, and sufficient but nothing I’ll crave or purposely seek out. 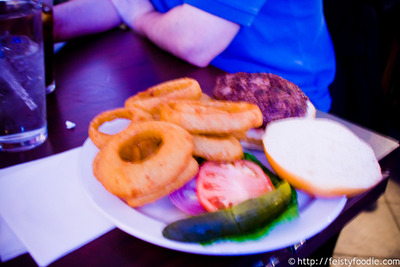 DLS went with the burger… I think he liked it just fine, but he’s not particularly picky or descriptive when it comes to what he eats (yet… I’ll change that, for sure).

Also of note, this time, with table service, no free refills on our sodas!

Regardless, the above stands.  Great place to watch the game(s) and have a bite to eat!