Last weekend, CT and I were walking around the neighborhood and saw a bunch of tents going up in Worth Square. We knew what that means and with a confirmation from the Madison Square Park website, we saw that Mad. Sq. Eats. would be returning for Fall during September 23rd through October 21st. As you may remember from previous posts, CT & I have always enjoyed this event with its delicious foods.

We arrived a little before noon on the first Saturday of the event and there was already quite the crowd. We took a walk around to see what the current offerings were and noted a bunch of returning vendors and some new ones. 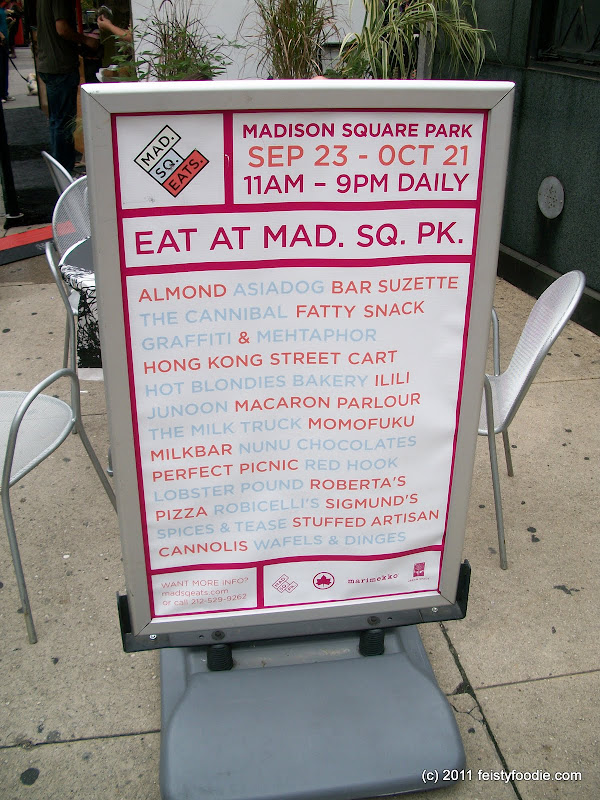 The first new vendor we came across was selling freshly fried mini donuts. I actually didn’t catch their name because they were giving out FREE SAMPLES! Although we hadn’t had lunch yet, CT tried one for the sake of the blog. I’m pretty sure she like it. A LOT! 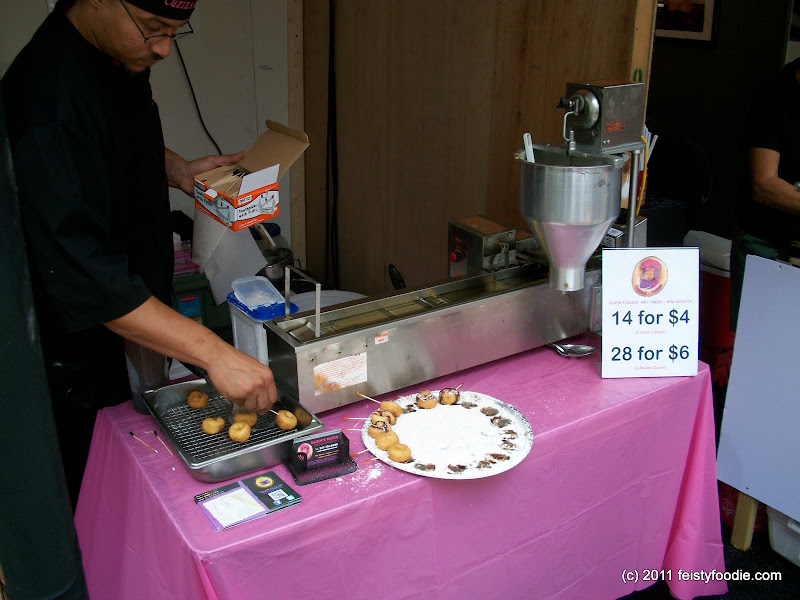 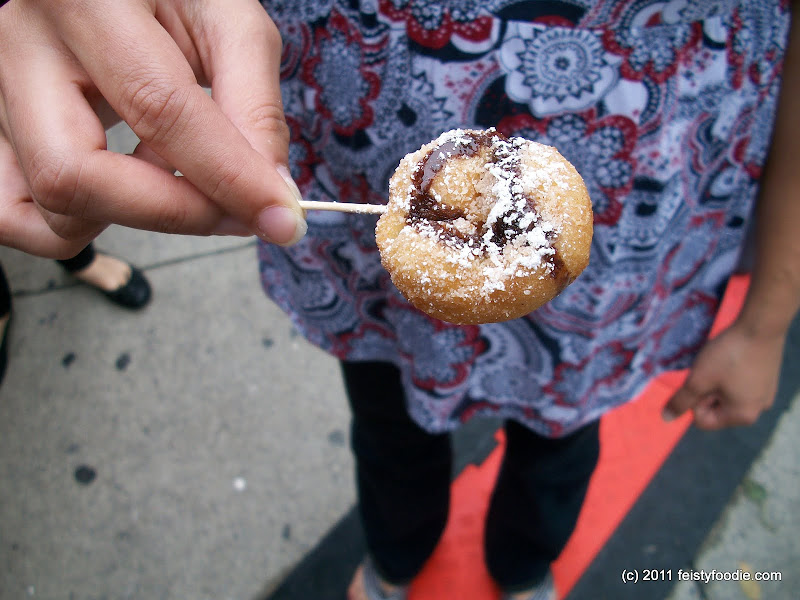 CT says: Like them? I loved them! Fresh warm donuts drizzled with chocolate and sugar… for free?! So good! They were cake donuts (whereas I usually prefer yeast donuts), however they were lighter than your average cake-donut and just the right amount of sweetness in the dough. I believe they were selling them by the box, and I would most certainly buy a box for myself… I mean, if I were having brunch with a group of people. Or lunch. Or dinner. I love donuts.

Next door was Macaron Parlour with an interesting variety of macarons and homemade poptarts. I didn’t get the nerve to try the Candied Bacon & Maple Cream Cheese macaron, but maybe next time? 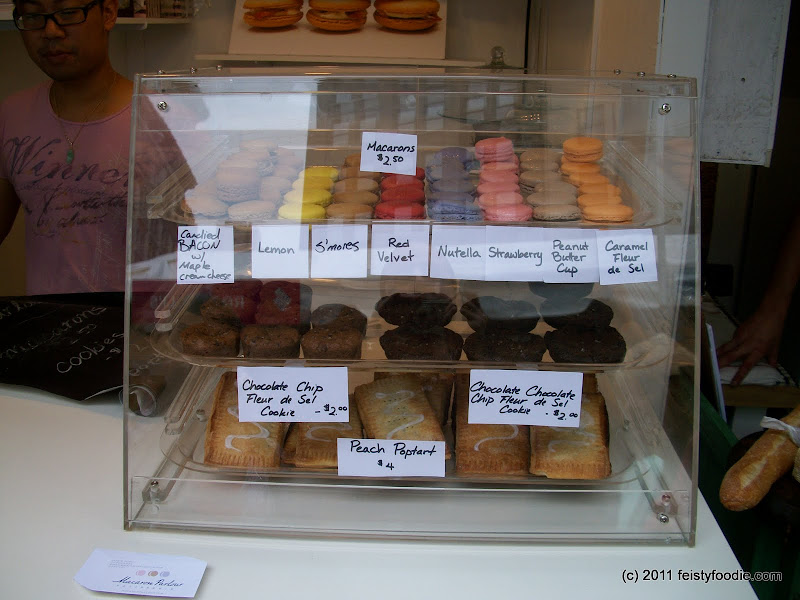 ilili was back with their whole roasted lamb. I’m pretty sure it is just on Saturdays though. 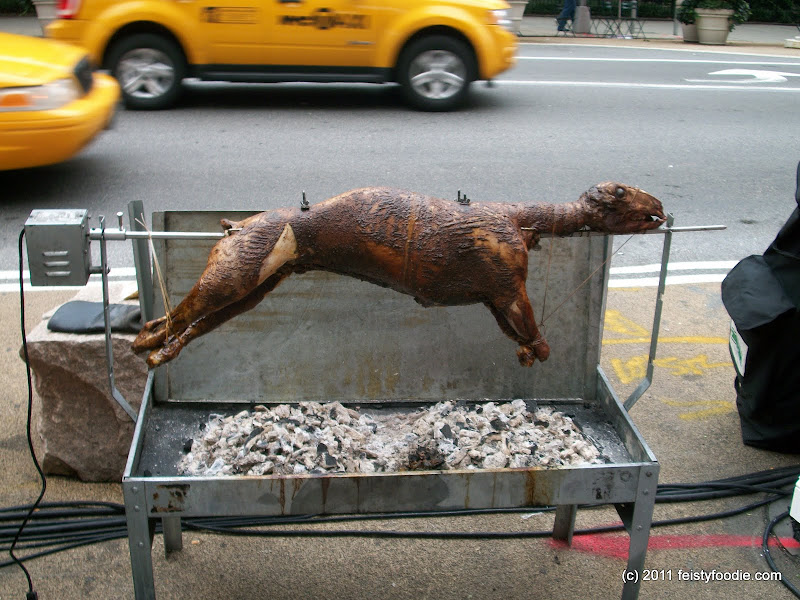 Roberta’s was also back with their mobile pizza oven. They had three of the same pizzas from last time, but now also a Brussels sprout pie. We didn’t try it due to their poor spelling technique. 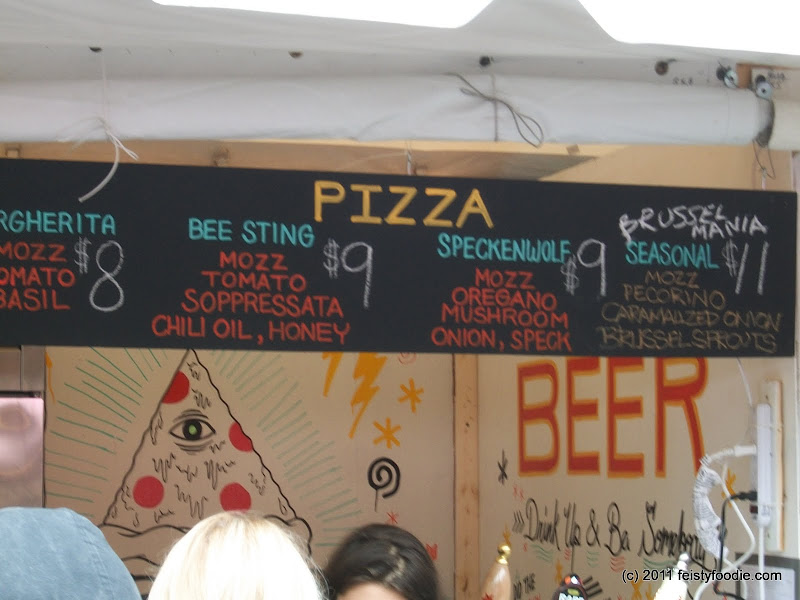 The offerings at Almond caught my eye. 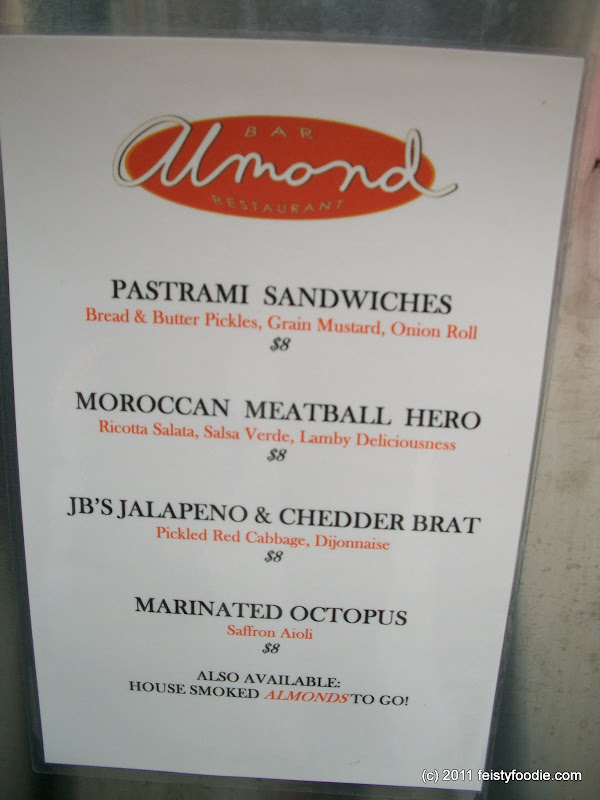 Octopus? Yes please. Although it was a little small for $8, the octopus had some great flavor that was made even better with the saffron aioli. It was extra chewy, but it is hard to expect perfection at a street market. I didn’t mind the chew though. It was nice especially with the crunch of the crostini. 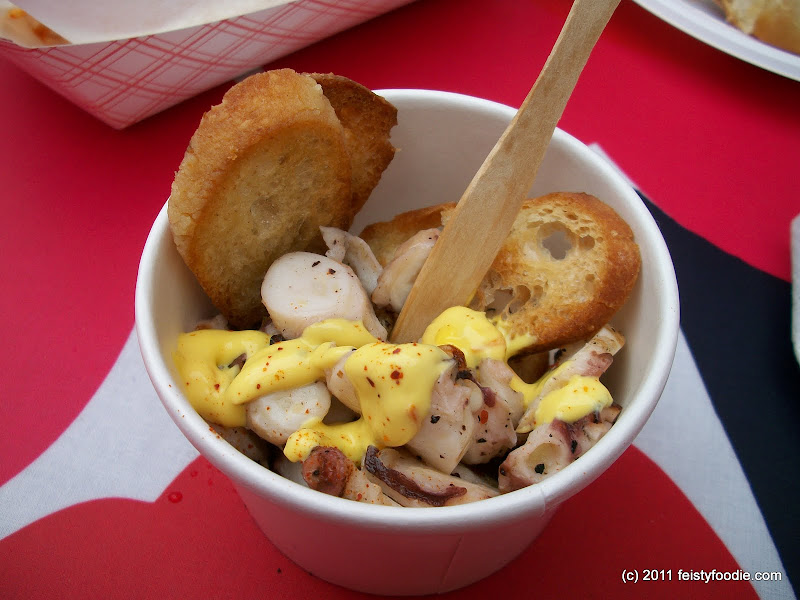 CT says: Impressive for a street fair, but not my favorite. I let TT take most of this. I’d rather spend my $8 on the next item.

I also got the Moroccan Meatball hero with ricotta salata, salsa verde and lamby deliciousness. This was a pretty great meatball hero. The meat had enough lamb flavor to know that it wasn’t beef. The sauce was nice and tangy but a little too thin so it made the bottom of the roll quite soggy. I hadn’t had a meatball sub in a long time and this was a great way to get back on the horse. I wonder if you ask, if you can get extra lamby deliciousness on the side? 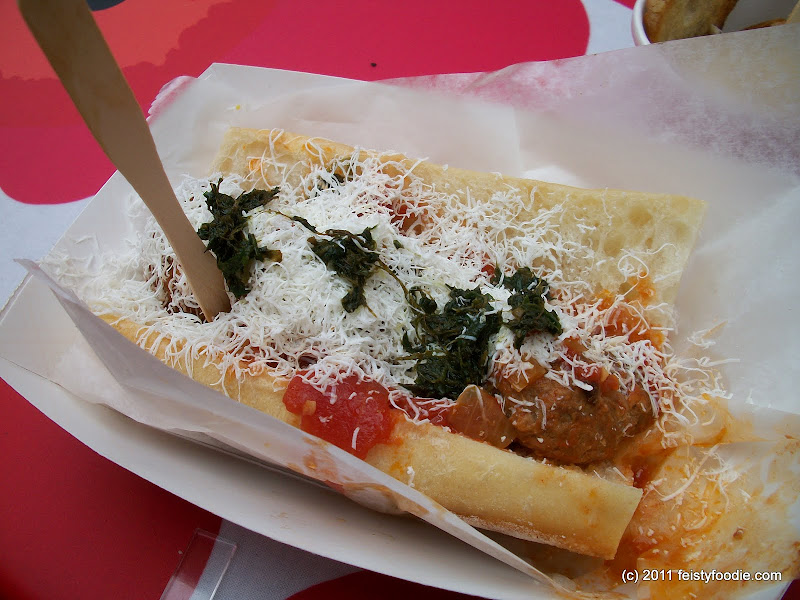 CT says: These were some good meatballs! Soft and meaty. Though the sauce made the bread soggy, I just flipped it around, so soggy side on top, and all was right. I actually like a little bit of soggy bread… crusty on one side, soft on the other, and meat stuffed goodness. This place is a great addition to the market.

We also decided to try one of the new stalls which was from the restaurants Graffiti & Mehtaphor, which are owned by Chef Jehangir Mehta, who you may remember as a contestant on The Next Iron Chef. They had a couple of different Indian inspired offerings. We decided to try the “Indian Street Food burger” aka their veggie burger. It came with garlic fries for a total of $8. The “burger” was basically a vegetarian sloppy joe. It was spiced nicely and quite tasty. The fries didn’t look like much, but had some prevalent garlic flavor. I am glad we tried this especially since it was “healthy,” but I wouldn’t get it again. 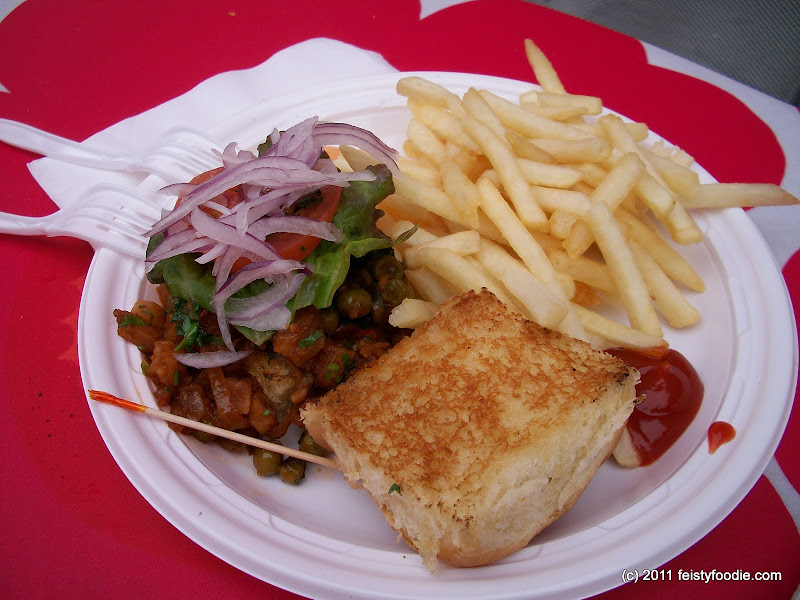 CT says: I was hesitant to try the veggie burger, when a perfect good sounding beef-burger was also on the menu, but I figured since we’re getting a meatball sub, why not? It was very spice-fully flavored (though not hot-spicy) and had a nice mix of veggie tumbling out the sides of the burger. I actually liked that they used chopped veggies, instead of trying to form a smushed patty, even though it meant a fork was required. It was a little bigger than a slider. For $8, I was glad it came with the fries. I would have preferred the fries a little crispier, however I liked the garlic flavor – just enough to taste the garlic, but not so much that I was afraid to open my mouth as I continued on my shopping journey.

We washed all of this food down with a Iced Pomegranate Green Tea from Spices & Tease. I think it was $2. It was quite refreshing with just a hint of pomegranate on a humid day. 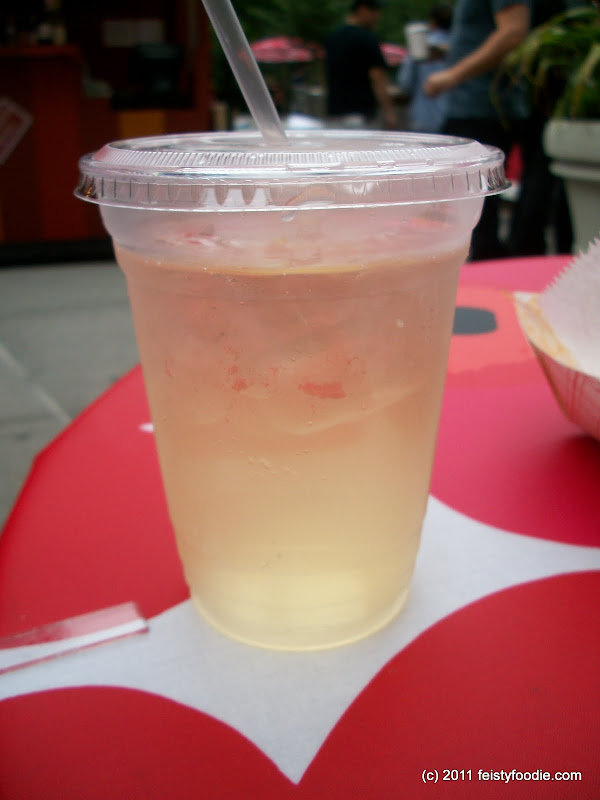 All in all, I am sure glad to see Mad. Sq. Eats. back again. They have a lot more seating in the area for everyone to enjoy their food and drink al fresco. I am eager to try some more of the new stalls and return to some of the older ones. This only lasts until October 21st so be sure to head over soon!