CT & I have been back for from our Panama trip for a little while now and already have a bunch of NYC based posts for you. Rather than let them get “stale,” we are gonna have a couple bonus posts. I am helping out Yvo this morning with an extra special post.

One of the great perks my company has is “Summer Days.” Everyone gets four extra days off between Memorial and Labor Day. Since August is a very quiet month in NYC especially my office, I took a Friday off to relax and also run some errands in preparation for a special dinner CT & I were cooking for my family the next day. CT’s office was also particularly quiet, so she ended up working a half day from home. Since our apartment is close to the new location of Num Pang for lunch and since we normally aren’t in the area at that time, we decided to check it out.

Num Pang is a Cambodian sandwich shop that opened their original location in Union Square a couple years ago. They just opened their new location near Grand Central back in June. They offer a nice selection of sandwiches with high quality ingredients and unique combinations that Midtown office workers have been craving as evidenced by the very long line when we arrived. Fortunately, they had a very good system in place where orders were taken at the window and then food was picked up inside. There is some counter space, but the place is pretty much take out only. The main reason why the line moved so quickly was that no changes are allowed to the sandwiches, so they could be made a lot faster.

Although we were taking the food back to our apartment to eat, we both decided to get drinks since they had Blood Orange Lemonade!! For $2.50, it was a good size and super fresh. Definitely more tart than sweet, so you have been warned. 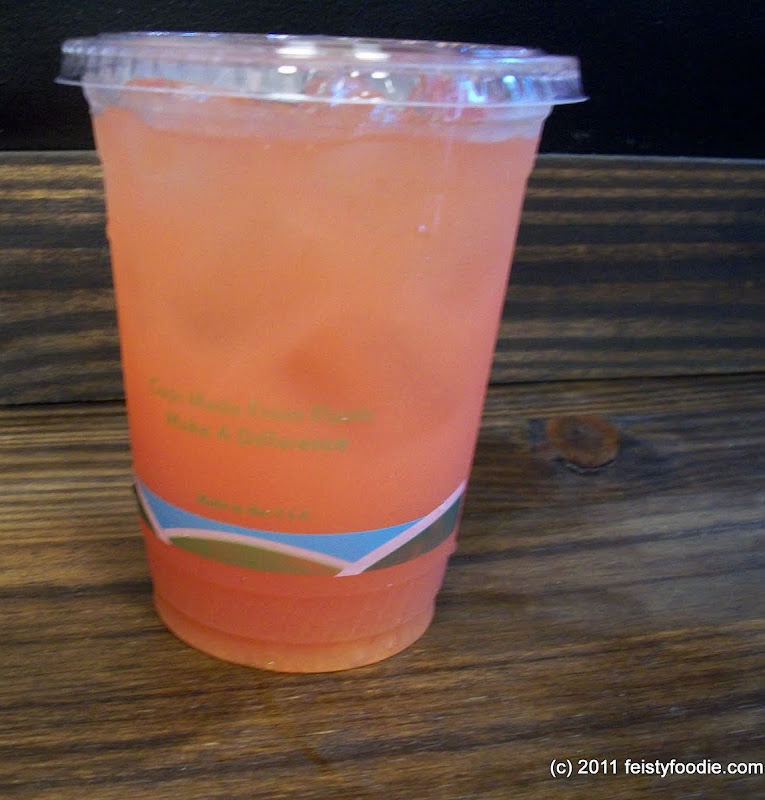 All of the sandwiches come on a nice roll that was about 6 inches long and are topped with cucumber, pickled carrots, cilantro and chili mayo.

CT chose the Five-Spice Glazed Pork Belly with Pickled Asian Pear ($7.75). The pork belly was quite sizable and cooked nicely. The char and richness of the pork went very well with the slightly sweet and crunchy pear. They used a liberal hand with the mayo, which was delicious and super messy at the same time. 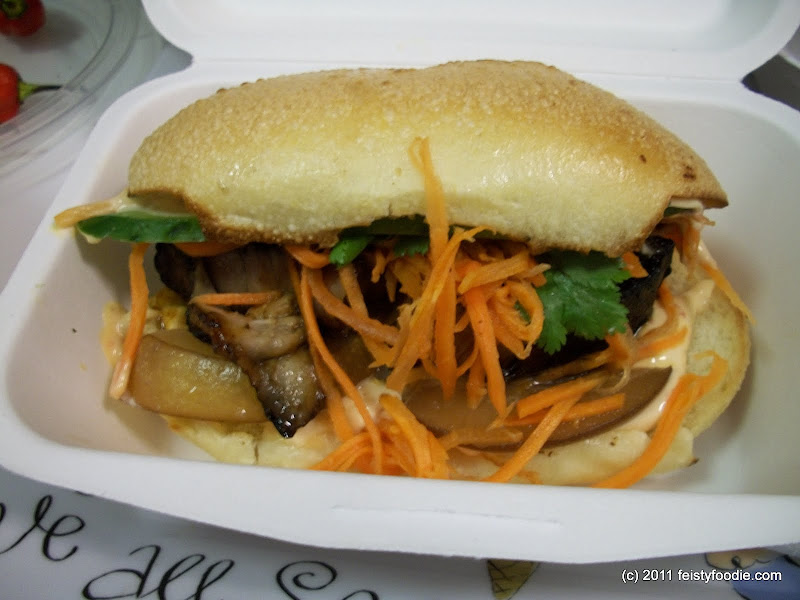 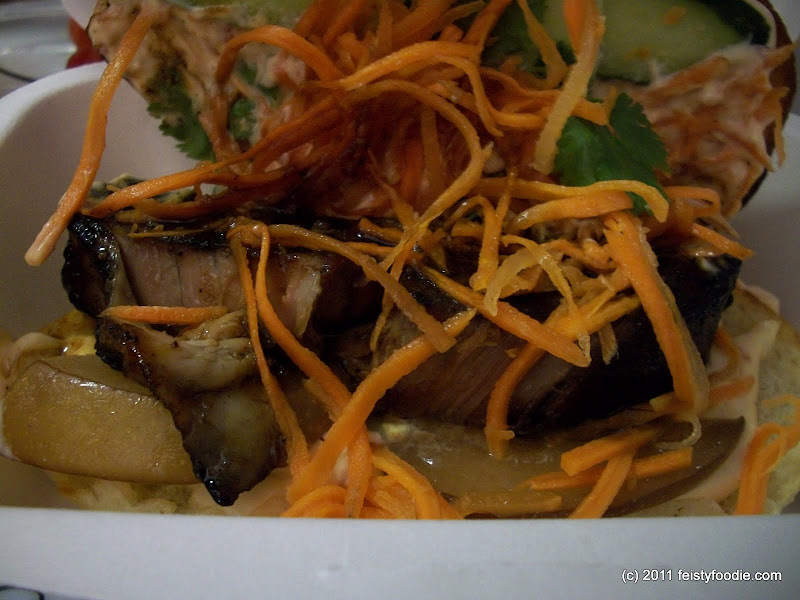 CT says: I really enjoyed the various flavors in the sandwich. The pear was mostly soft, but still had a little bite to it, which added a nice texture. The pork was juicy, smokey and overall delicious. My only complaint would be the amount of spicy mayo used, which overwhelmed the other sandwich flavors at times, and wasn’t spicy at all. But that was fairly easily wiped away. Plus there were bottles and to-go cups of Sriracha available to add a little extra kick. I would definitely go back for this sandwich and to try the others.

I got the Grilled Peaches with bacon, sauteed chives & jalapenos ($7.50). This sandwich has had a lot of buzz about it and for good reason. The peaches were packed full of carmelized sweetness from the grilling, which was offset by the salty bacon. There wasn’t a ton of bacon inside, but I was quite happy with the sandwich anyway. One of my first bites included a big slice of jalapeno that was super hot. I am no longer a wimp when it comes to spice, but boy did that put my mouth on fire. You have been warned! 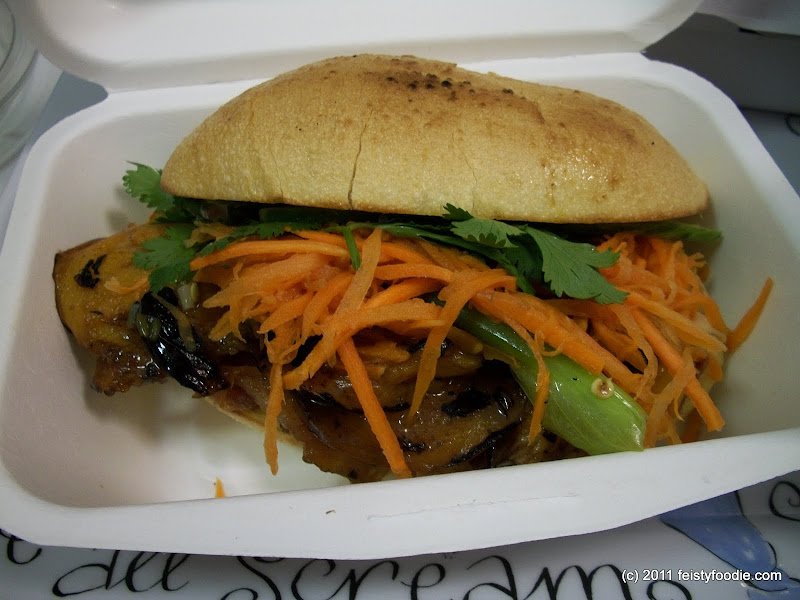 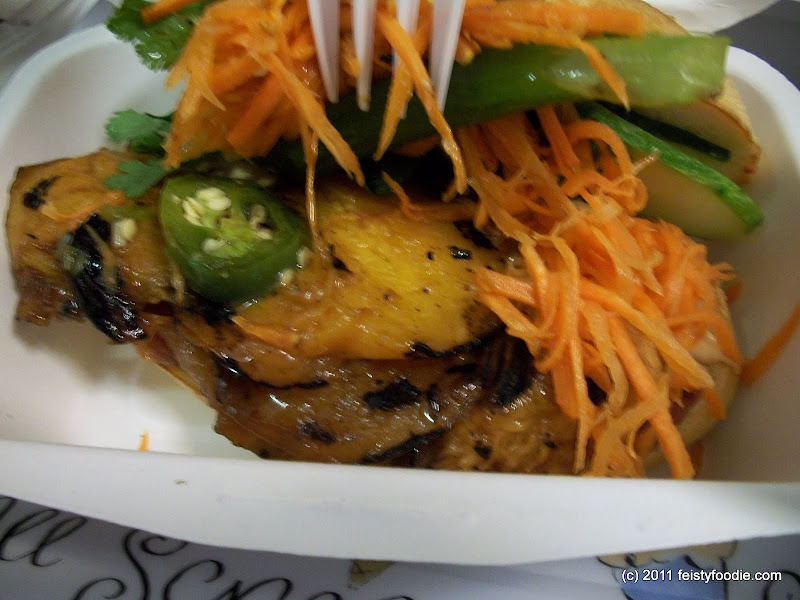 They also were offering a special side of ribs for $8.50. Who needs a bag of chips when you can get a side of ribs? I have no idea how the ribs were seasoned, but they were definitely “Asian-y.” I was a little disappointed it was only 3 small ribs, but each had a fair amount of meat. There was a great smoke flavor from the grill and they meat was literally fall of the bone. The accompanying sauce added the right amount of sweetness to the ribs. 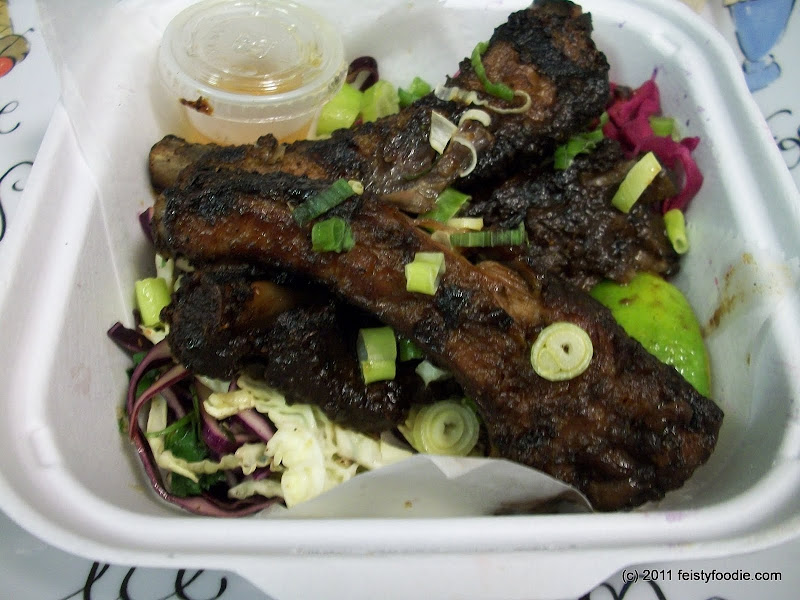 CT says: I just couldn’t pass these up, even at $8.50 a pop. They were very tender, packed with flavor and really did have a good amount of meat on each bone for the price. It was a special of the day, but I would happily order them again if I saw them.

We also got an order of grilled corn ($2.50). The corn is rubbed with chili mayo, coconut flakes and chili powder. As you can see for a take-out joint, they haven’t quite perfected the wrapping of the corn since it ends of being quite messy in the foil wrapping. The corn was excellent! The mayo brought a little extra moisture and spice. The coconut was quite interesting as I would never think to eat it with corn. It is also prime corn season so the ear was sweet on its own too. 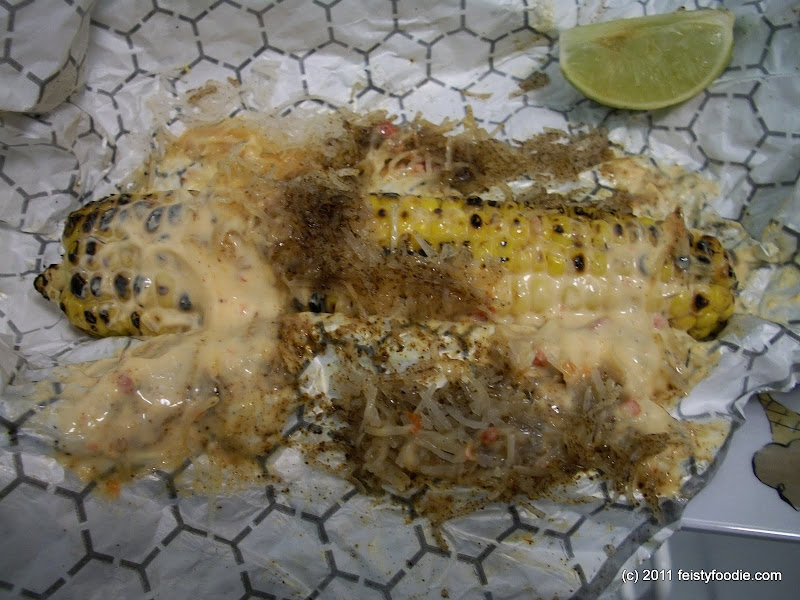 CT says: The corn itself was good, but I think the mayo and coconut flakes were unnecessary. They really didn’t add much to the corn, in fact it detracted from the corn in my opinion. The chili powder was good, but the coconut flavor was too strong. Fortunately, most of the flakes and mayo had fallen off in transit.

All in all, Num Pang was worth the hype. It wasn’t a cheap lunch($34 for everything), but we were both quite full by the end of it. The sandwich combinations were great and I definitely want to go back to try the others. Thanks Num Pang for opening so close to my apartment!