As I mentioned yesterday, I had lettuce coming out of my ears at one point.  Hungry made the comment that she’s used lettuce leaves as “taco shells” so I set out to do just that. 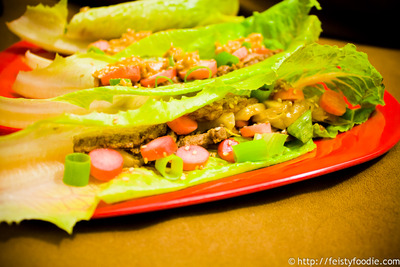 I had a ton of scallions from my CSA as well, so that was the topping. 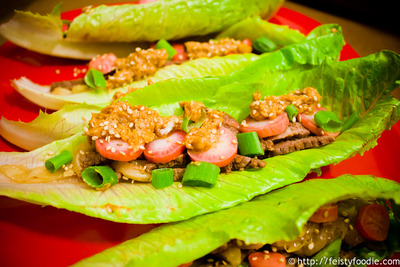 BeerBoor gifted me a large jar of almond butter, so I doctored that to make a sauce as well. 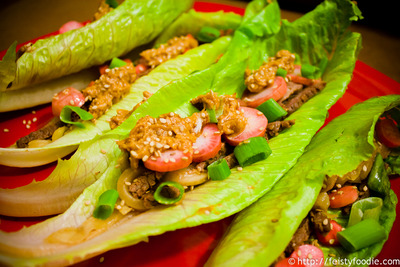 But you want to know what the protein was… it’s so simple, I almost shouldn’t even mention this. 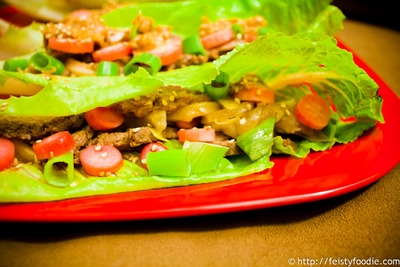 A package of Trader Joe’s “bool kogi” (bulgogi, marinated meat slices).  I found these tasty several years ago and bought packs of it whenever I saw it since they ran out quickly whenever they restocked, and took to freezing the extras until I felt like eating it.  And because the lovely FBM’ers won’t let this slide without putting it in the comments, I’ll admit upfront that this package was one I found kicking around in the freezer… with an expiration date of more than a few years ago.  I ate it, I didn’t get sick, I was totally fine… it’s vacuum sealed in two different sheets of plastic, so maybe that’s why, but whatever.  It still tasted good 😛 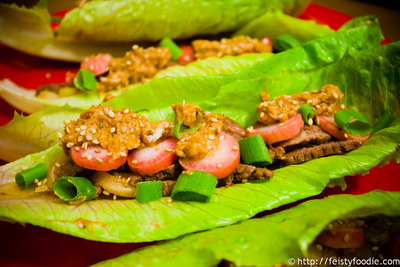 And while I like it, it’s nothing like ‘real’ bulgogi, which tends to be sliced thin and chopped small… which is why I don’t like it.  These are thick slices of beef, and you can cook them medium rare if you so choose (I generally aim for that).  They come out juicy and delicious.  I just drop them into a preheated heavy-bottomed skillet with no oil since the marinade has oil in it, then flip when it starts looking browned on one side.  I got some nice caramelization on these, then sliced them into small pieces for the lettuce wraps.

As for the almond butter – I mixed with a little sesame oil, a teensy bit of soy sauce, and some rice wine vinegar to taste… and a little Sriracha, which totally kicked my taste buds around a little bit.  Play with the proportions to find a concoction that you like!

And the pink round discs…!  Pickled French breakfast radishes.  Yup, I pickled them a few days earlier and was wondering what to do with them.  This worked out fantastically – the slightly sour-pickly taste and the crunch really elevated these wraps to new levels.

I found this recipe that seemed to work rather well.  I tweaked it a bit – I somehow didn’t have my plain clover honey, so I used the super fancy ulmo honey I have, which imparted a lovely floral scent to the pickles.  I kept the garlic cloves whole, so I’ll be eating those eventually – yum!  I think those are about the tweaks I made, I may have also added some mirin… just because I had it.  Also, I rarely ever follow recipes exactly, it’s worked out better for me this way.