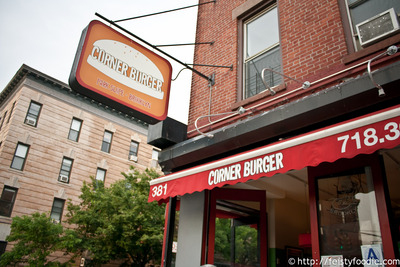 I found myself in Brooklyn for food again recently – apparently, the way to get me to go to Brooklyn is proffer a Groupon; so Corner Burger was the destination. The lure? POUTINE.  TWELVE DIFFERENT WAYS. 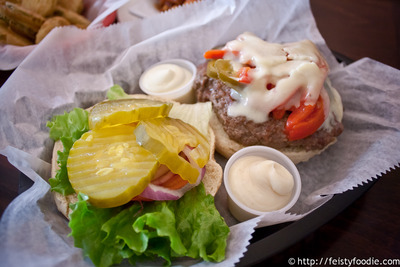 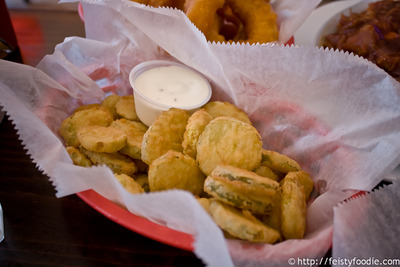 But to start, we went with fried pickles. Piping hot when they arrived, once they’d cooled down a bit, had a great crunch to them. The breading was a little weak, but I found these pleasant enough to munch on and dip in the accompanying ranch sauce. 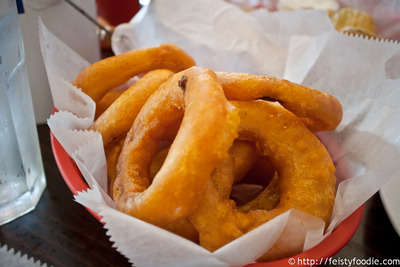 We also chose onion rings, which were super weak. Personal preference: I don’t like this type of coating, the slick, smooth exterior.  This was no different, very greasy and not particularly tasty in my opinion. I’ll definitely get something else next time… 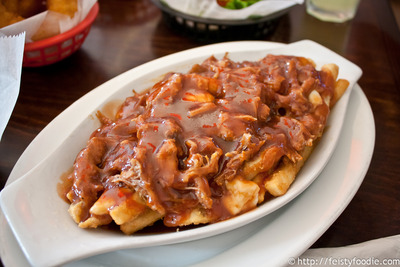 As for the star of the show, the reason we’d gone: after a brief debate, we chose to go with the poutine cochon, pulled pork on top of frites, with cheese curds and BBQ sauce. The meatiness was really nice, and the pork was super tender.  The fries were crisp in the beginning, but obviously sogged up with sauce after a while – nature of the dish. The weak link in this dish, unfortunately, though, was the BBQ sauce. Overly sweet, and tasting faintly of ketchup, I could have done without the BBQ sauce and been really happy. Or less of it. Just… too much brown sugar.  I definitely want to try the regular poutine next time! 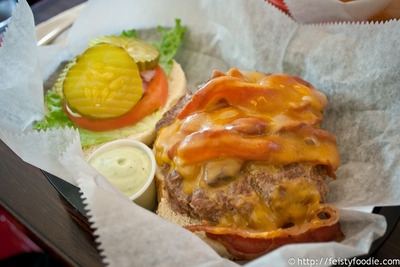 And as for my burger, well, bacon cheeseburger it was, with mayo on the side cuz yes, like a true Canuck, I like mayo on my burgers. 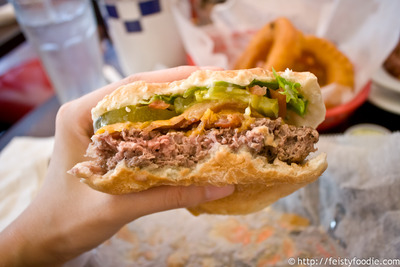 Super juicy, super tasty, I actually really enjoyed my burger and its accoutrements. It was cooked perfectly to my specification of medium rare, and everything worked together to make my mouth happy. I especially enjoyed the bread not being obtrusive; instead it just played its part as vehicle to the other ingredients. Perfect meat-to-bun ratio. I will say the burger was the slightest bit too big for my tastes – I tend to like my burgers sliiiiiightly smaller – but it was still very tasty.

Yvo says: I enjoyed my meal very much, and were it closer to me, I’d enjoy it even more.  Tempting as they are, Chip Shop is directly next door, and I really want to go back there, too!  What’s a Queens girl to do with so much good food in Brooklyn?  C’est la vie… I will be back though, to try the other poutine types and maybe a milk shake – I had my eye on one this time, but couldn’t justify the extra calories!  Yum!
recommended