Last month, Yvo invited me along to the “Brunch by Simply Orange” event at The Institute for Culinary Education aka ICE. I have seen Simply Orange in stores and once bought its “Simply Limeade” to drink with lunch. I enjoyed it a lot, so I was interested to see what they would be promoting. I have also taken a bunch of cooking classes at ICE and consider it the best recreational cooking school in NYC. Yvo heard from the PR person that I would be the only guy at the class. As if that would scare me. I held my own at the Prevention.com event a couple months back.

Yvo says: I’ve really enjoyed the cooking classes I’ve taken at ICE, all via press event. (I’ve ‘complained’ about this in the past: every time I register for a class at ICE, it gets cancelled due to lack of enrollment. The other classes are all sold out. I don’t get it!!!)

I arrived a few minutes before Yvo, so I started with a drink. They had a small bar setup offering three cocktails “specially designed” for the event. Basically Prosecco mixed with different Simply juices. I chose the “Berry Tart,” which was a mix of Prosecco and Simply Lemonade with Raspberry. It was quite tart and refreshing; perfect for a hot Summer day. 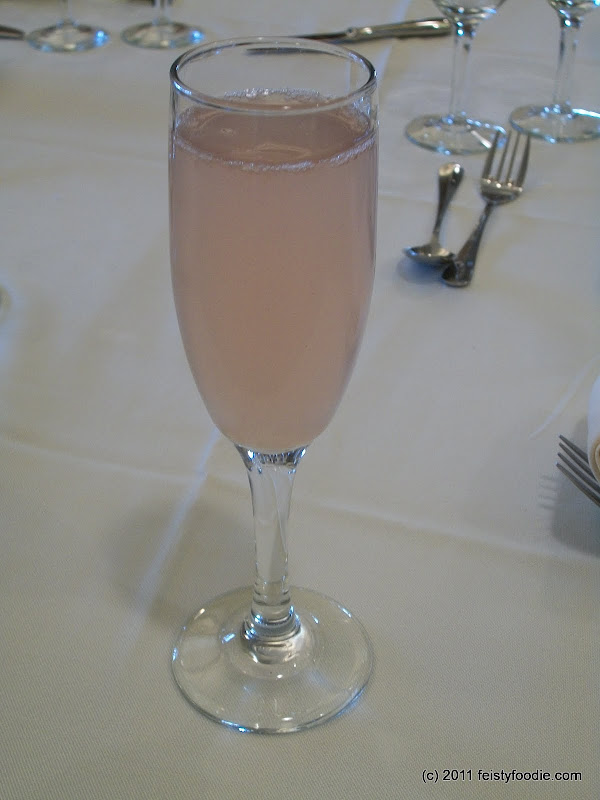 On the other side of the room, a “fruit stand” was setup with representatives from Simply pouring tastes of all the juices and answering any questions we had. For instance we learned that the juice was only lightly pasteurized and has zero additives. I tried their grapefruit juice. It was ok, but not quite tart enough. 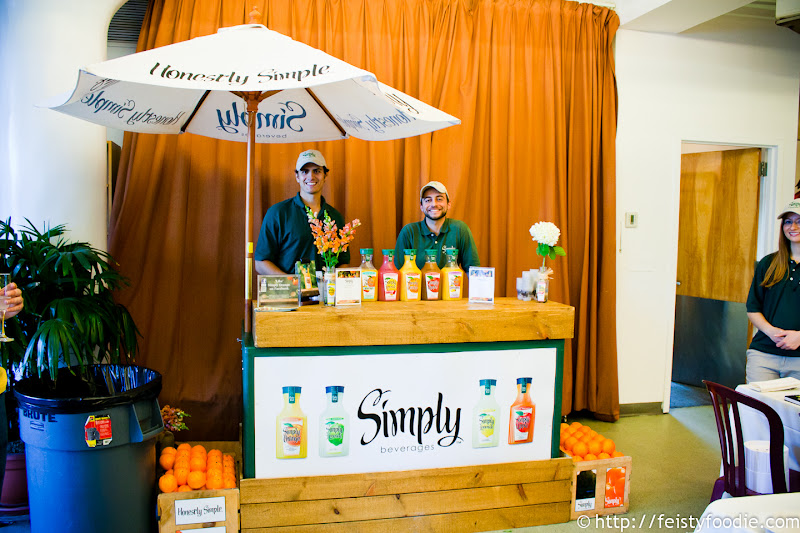 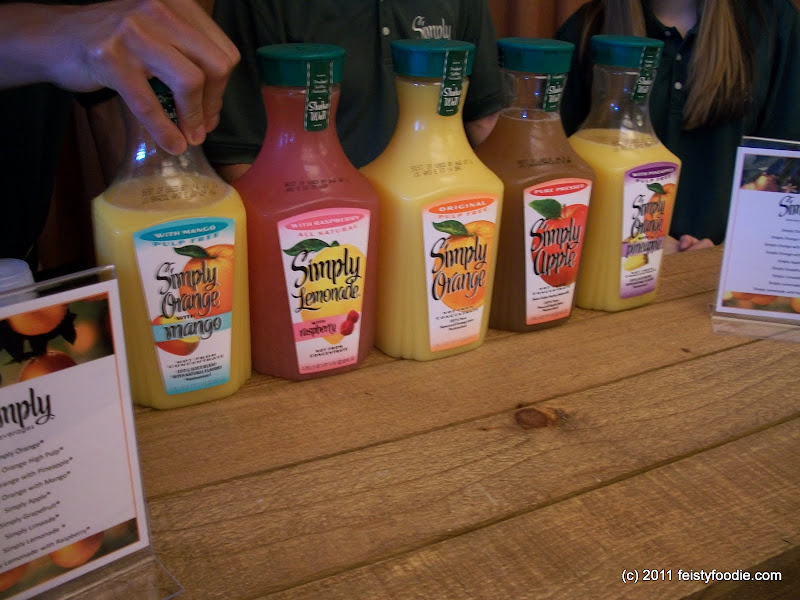 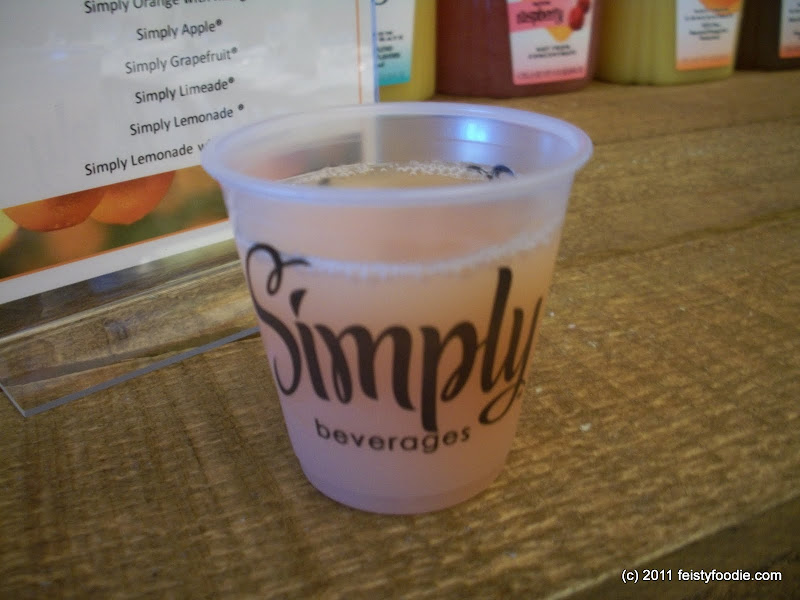 Yvo says: Funny, I thought the grapefruit was ever so slightly too tart for me. Then again, it’s been a very, very long time since I’ve had grapefruit juice (without vodka)…

They had two crates of oranges on both sides of the stand. Yvo asked me if they were real oranges. I thought so and lightly squeezed them. I guess that drink went to my head because on closer inspection it was actually styrofoam. hahahahaha 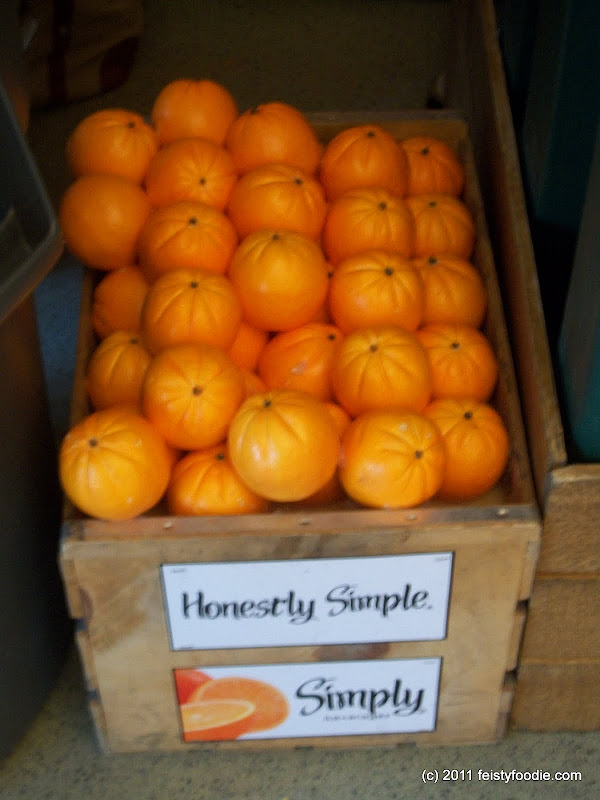 Yvo says: I thought they were too perfect looking! 😛

They also had some cheese and crackers with a little fruit for us to nosh on, which was set up in front of the dining table. 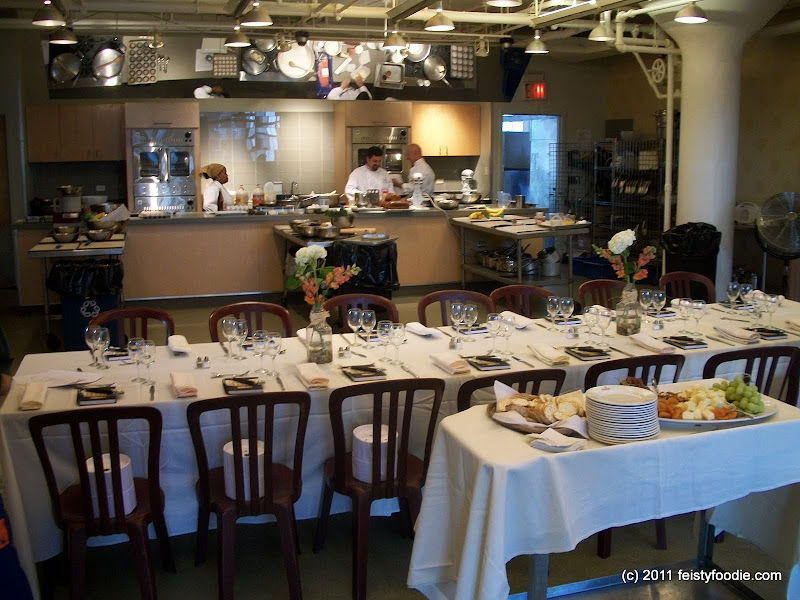 Once we were all set with drinks and noshes, the lead Chef of the event, Scott McMillen, explained what we would be cooking. All of us were split into three groups and each group had its own Chef and two to three dishes to cook. Since Yvo and I were probably the most experienced cooks of the attendees, we dove right into the cooking so we didn’t get a chance to take pictures while we were cooking. Also, it would have been too difficult to stop and wash our hands after each use of the camera. Our group was responsible for the Cheddar Buttermilk Biscuits, Smoked Salmon Hash and the Asparagus, Green Onion & Goat Cheese Quiche. The Chef did a good job to keep everyone as engaged as they wanted to be. 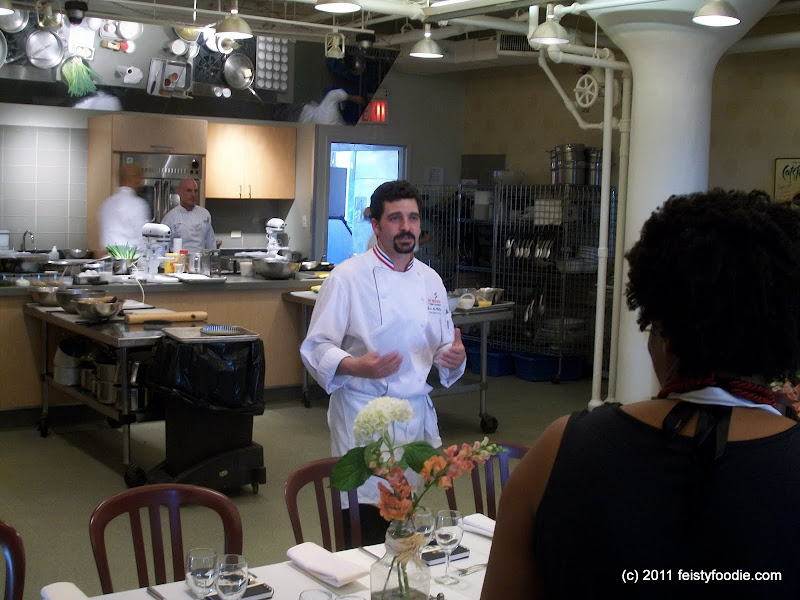 Yvo says: I don’t know if we were the most experienced cooks of all the attendees, but in our group, definitely, since TT and I both cook at home frequently.

Once we were done cooking, we all sat down while the Chefs put the food on platters for the buffet. We found a little bit of swag on the place setting; a notebook, pen, and two coupons for free bottles of Simply juice. I also had some more limeade. mmm. Definitely their best juice by far! 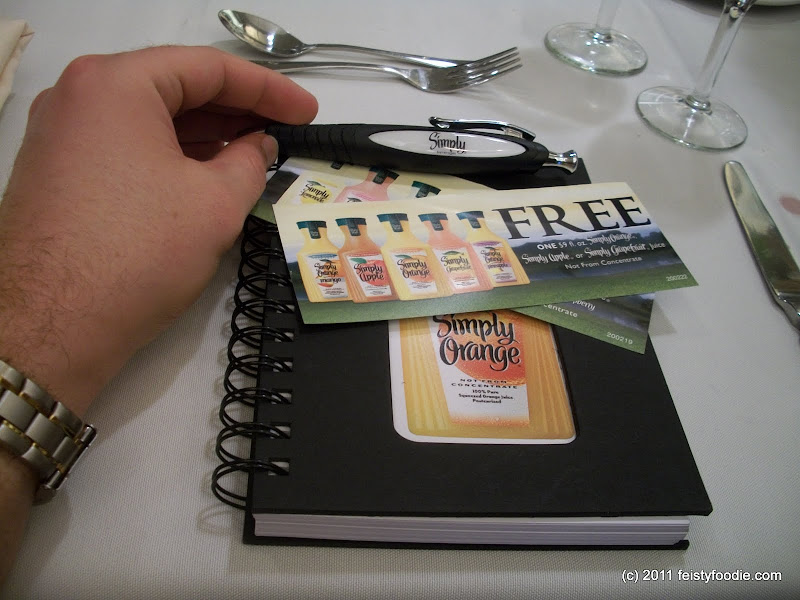 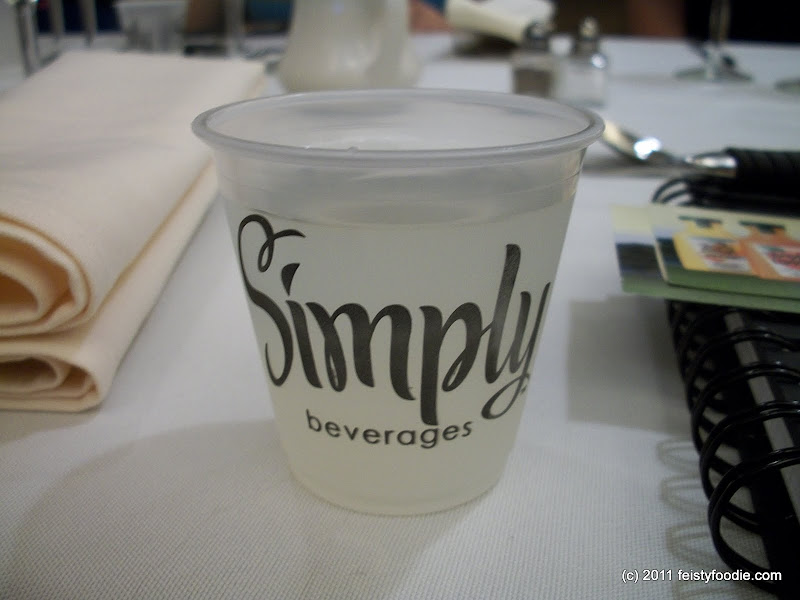 Yvo says: Yes, I definitely enjoyed the limeade the most, after I sampled my way through just about all of them. I think I forgot to try the orange juice, funny enough. Mostly because they have different styles – one with extra pulp, which I don’t like, and that one kept passing in front of me, so I would drink something else and totally forgot to try the no-pulp one. (I really don’t like things in my drinks.)

Cheddar Buttermilk Biscuits. Unfortunately there wasn’t enough cheese or salt put in when these were being made by my team members. Yes, I am throwing them under the bus, ha. Luckily, they were made somewhat edible with some butter that was on the table. There was so much food made, that no one went hungry by skipping these. 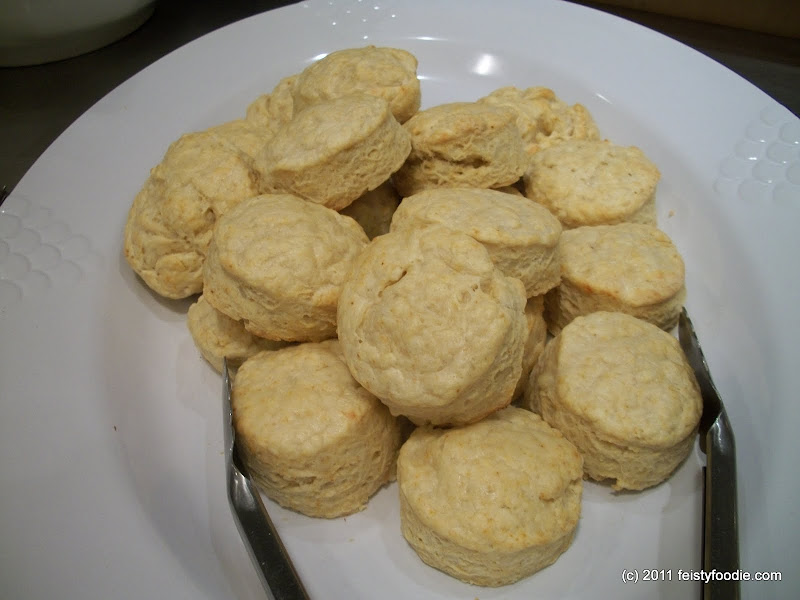 Yvo says: Hey! I grated the entire block of cheese! It wasn’t cheesy, true, but I think it was the lack of salt that made them not as good. They also weren’t particularly airy, which wouldn’t have been any of our faults… but the chef’s, since he supervised that part, haha.

Smoked Salmon Hash. This was by far the favorite dish of the night. It was also super easy to make. Basically fry diced potatoes in butter and add smoked salmon, capers, red onion, horseradish, sour cream and mustard. The only negative was that the Chef put a little too much salt in when cooking the potatoes, so with the salt from the salmon and the capers it became a little too much. Yvo and I both felt it a little strange when the smoked salmon was cooked with the other ingredients rather than simply mixed in off the heat. When I make this myself at home, I’ll probably do just that. 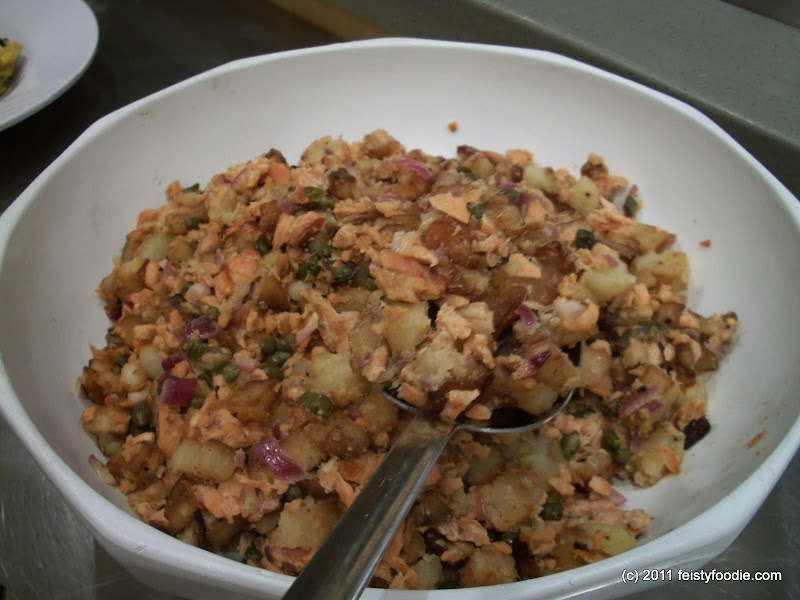 Yvo says: Yeah, I thought this dish was too salty. The potatoes probably didn’t need to be salted as much as they were. And this might be a personal preference, but TT cut the smoked salmon into nice, long strips. I would have tossed the cooked potatoes into the bowl with the salmon+dressing mixture, and let the residual heat from the potatoes take care of lightly cooking the salmon… and tried not to stir it too much. Someone stirred it so much that the salmon entirely broke into small flakes; I like big chunks of salmon. But that might just be me.

We served the hash with a poached egg on top. It was funny because our Chef remarked that he hadn’t poached eggs in ten years. Let’s just say the first couple didn’t come out that great, but I got one that was nice and oozy. 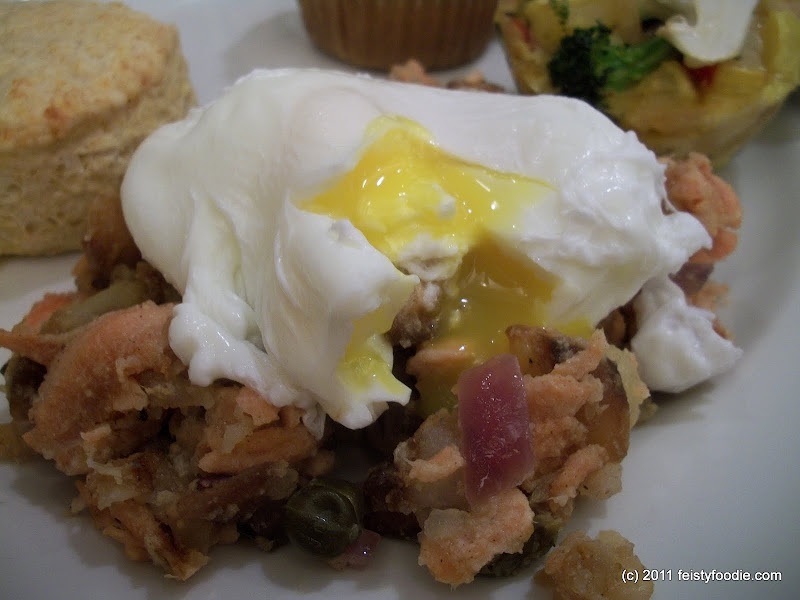 Yvo says: I still can’t poach eggs so no hate from me, though I did ask him quickly to just drop it on top of my hash as I was serving myself… after I watched him try to give one to someone and popping it on the serving platter. She didn’t seem mad and took it anyway, I would have agreed when he said “let me give you a different one” but I LOVE OOZY YOLK.

Banana Stuffed French Toast with Streusel Topping. This was the most unique French Toast I have ever had in my life. It was interesting to see that it was baked in the oven, rather than fried on the stove. It was pretty moist and tasty. I could have used a little more banana on the inside as you can see from the picture. 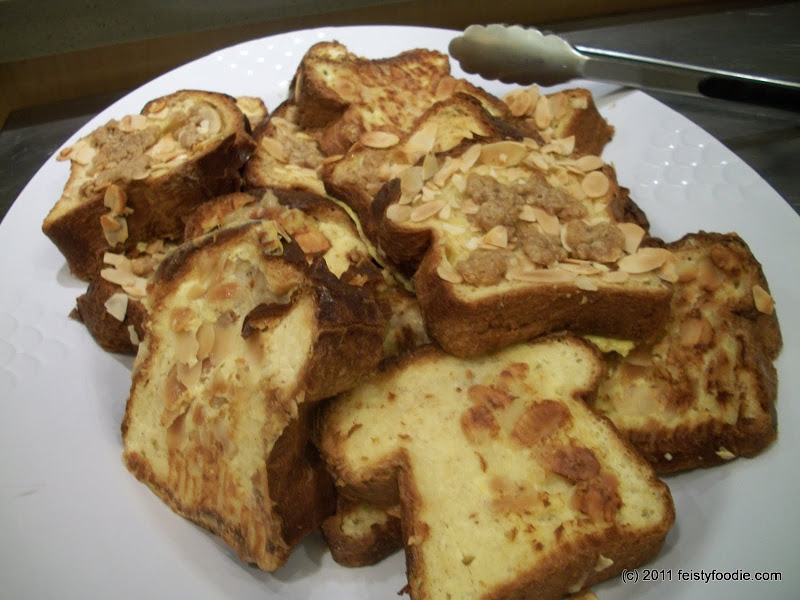 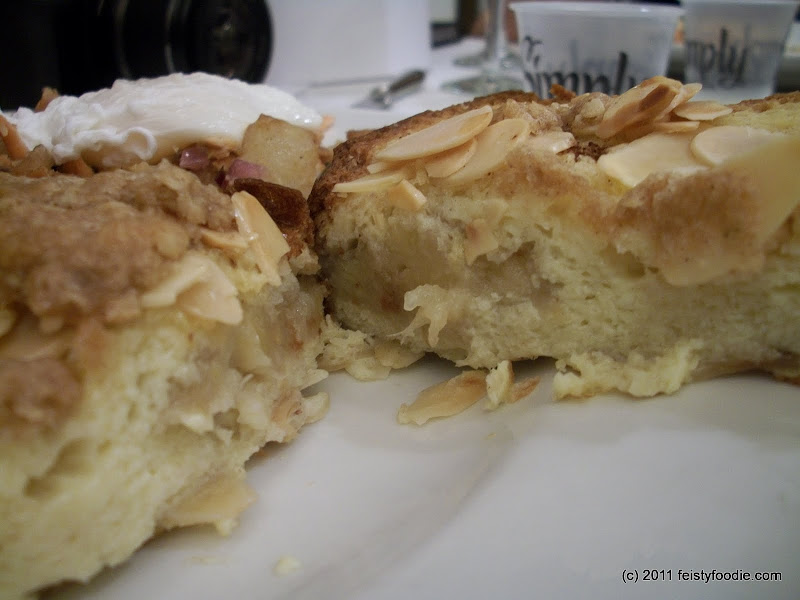 Yvo says: This was very moist and needed no syrup, though we had it on the table. It was slightly sweet from the streusel and bananas, and my half piece (I shared with TT) was perfect.

Simply Orange Pecan Muffin. This was the only dish that actually used any Simply juice in the recipe. A pretty good muffin that was surprisingly moist on the inside, but a little too sweet for me. They actually held up quite well that the ones I brought home to CT stayed fresh. 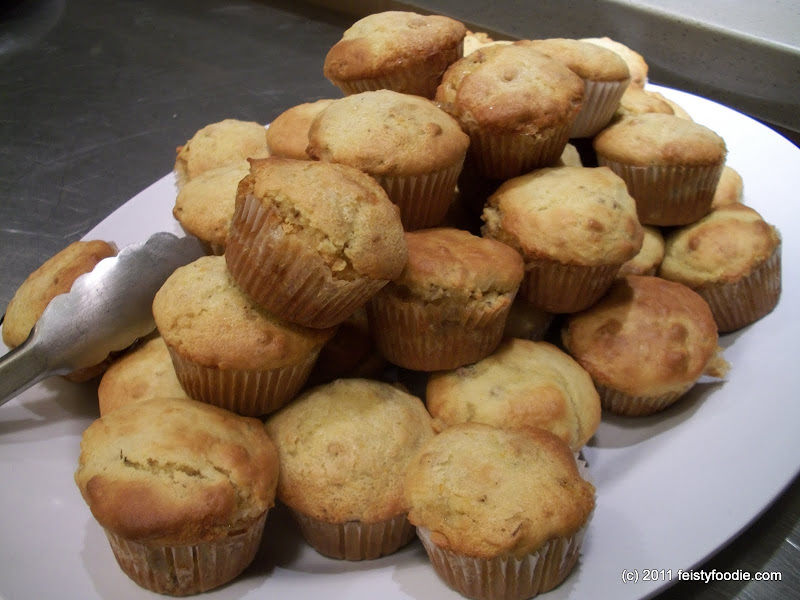 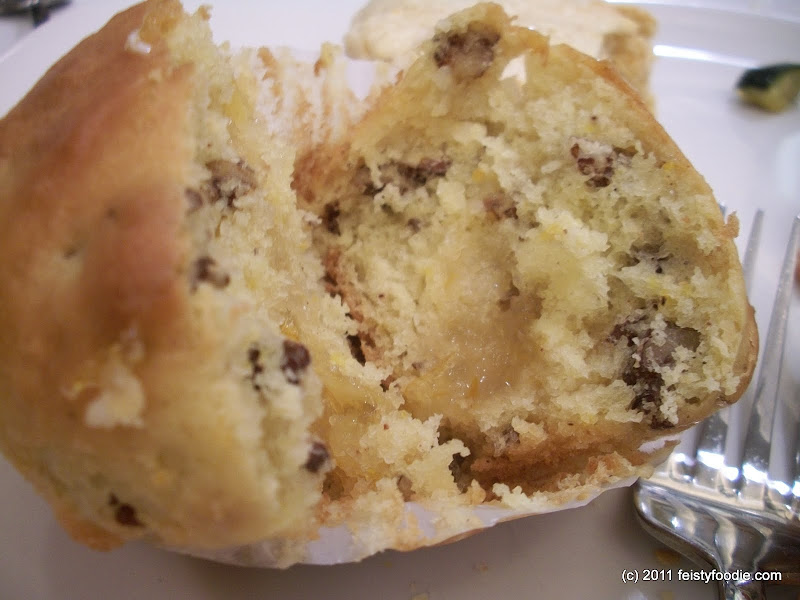 Yvo says: I enjoyed the muffin, but when I ate one a few days later, though it was still moist, I didn’t like it as much. It seemed to have more nuts or something, I don’t know. I’m weird?

Vegetable Frittata with broccoli, cauliflower, zucchini, yellow squash and red peppers. My favorite part of this dish was the fact that it was baked in muffin trays, which made cute individual portions. Very helpful for making brunch for a large group. Our friend Blondie helped to make this. It was quite tasty too and healthy with all those veggies! 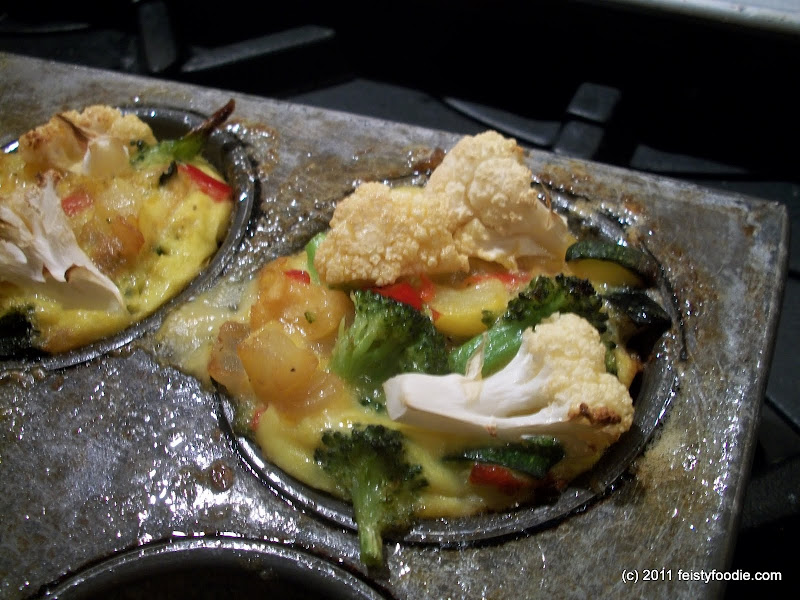 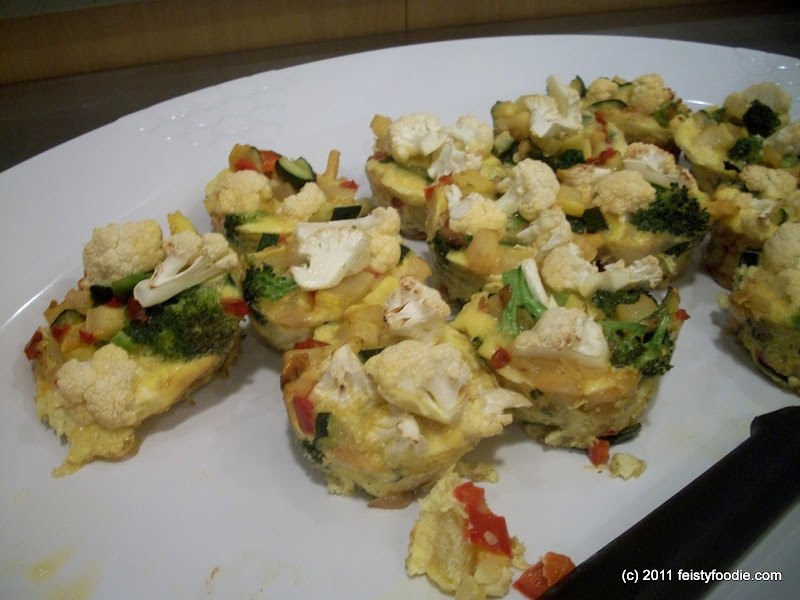 Yvo says: I actually really enjoyed these. I mean, REALLY. The salt/flavor profile was almost to my exact tongue, it must have been, because I mean this was probably my favorite part of the meal. The combination of veggies was just what I like – bell peppers, broccoli, cauliflower, … there was something else… it was good. I totally want to make these for just me now 🙂

Asparagus, Green Onion & Goat Cheese Quiche. Our group also prepared this, even rolled out the dough. I don’t normally eat asparagus, but when mixed with a lot of egg and cheese, I made the exception. I remember hating quiches when I was growing up, but have now become a big fan. I would make this again, but probably get a frozen pie crust. 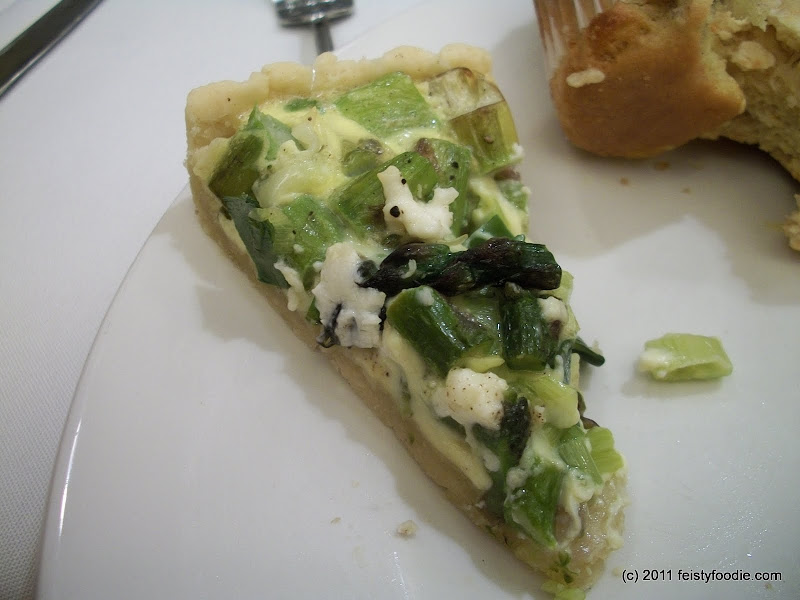 Yvo says: Yeah, I got a good upper arm workout beating and trying to roll out that stupid dough. It didn’t endear the quiche to me, but I don’t like quiche that much anyway.

Finally for “dessert” a Sour Cream Coffee Cake. Like the muffins it was surprisingly moist, which was made even better with the fresh whipped cream. The cake reminded me of an olive oil cake in appearance and taste. 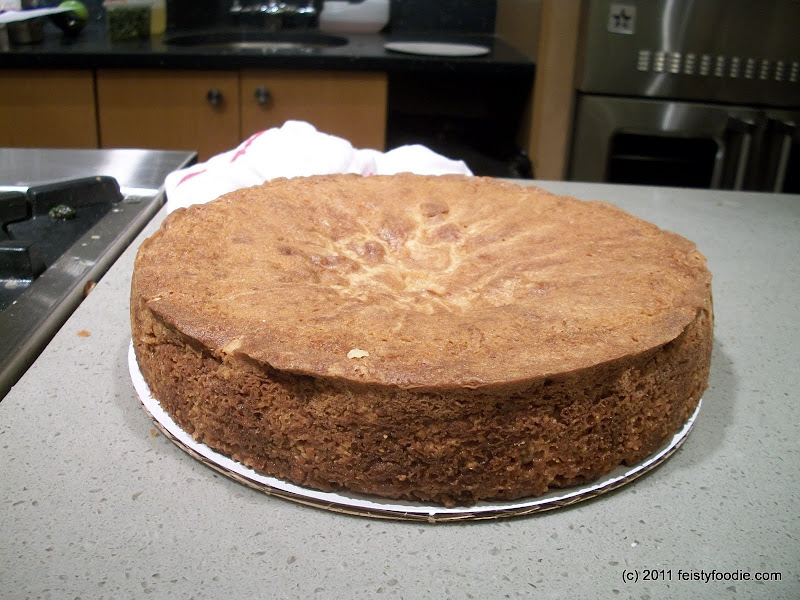 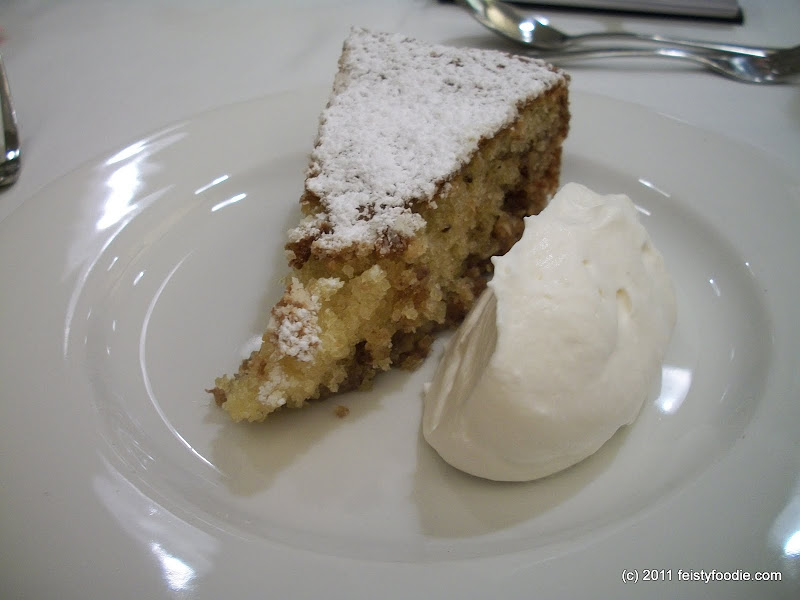 Yvo says: OMG, another YUM dish!!! I was really into this – the crust/edge was perfect, and then the moist cake with a delicious coffee taste… I inhaled my piece, ate part of TT’s, and took another slice home… uh… yeah.

All in all, it was a great event. We made some really delicious brunch dishes that I will add to my repertoire. Simply has some great juices, especially the limeade. Anyone who would like the recipes used, feel free to let me know in the comments. Thanks to Simply for having us.

Yvo says: Yes, thanks! Also, one of the great things about lingering, chatting at the end of the event? We also got to take bottles of juice home to enjoy right away! Unfortunately, I drank so much limeade through the night that there were no unopened bottles left 🙁 so I took lemonade, which is good, but… I like limeade better 😉 Now to figure out a cocktail recipe featuring the limeade…

NOTE: After the event I learned that Simply Orange Juicy Company is a brand of Coca-Cola. It was strange that the representatives pouring the juice made no reference of that and in fact talked about how they are just a “small company” when Yvo asked them about expansion plans into sorbets. Their website has zero reference to Coke too. Sneaky!! Regardless of the owner, the juices are still pretty good.

Please note that everything was courtesy of Simply Orange Juice Company. I received no monetary compensation for this review, nor was I obliged in any way to post about the food and drink, positively or otherwise. This is my own opinion and I feel it was unbiased; you are free to take from this what you will.