Marking a year since that very first, fateful potluck, we threw another May potluck, again on our gracious host, Hungry‘s rooftop.  It happened to coincide with The Rapture, which just made it that much more fun. 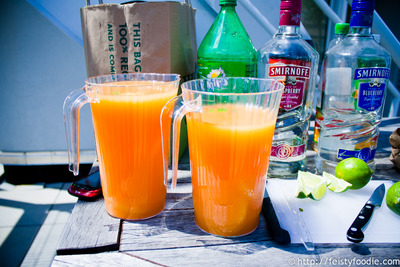 I’ve been playing with making my own cocktails, creating a ‘signature cocktail’ for the past few potlucks.  This time, I dubbed my creation Mango Tango, and it couldn’t have been easier to make.  I think it was pretty good, too – we went through them rather quickly, and people got good and toasty off them.  (That’s my mark of a good cocktail – it tastes good and gets you wasted, hahaha!)

1 bottle of Sauza Blue tequila (yes, I used the bottle they’d gifted me)
1 can of pineapple rings
2 bottles of mango nectar (I purchased these for $1.49/each at an Indian grocery store in Jackson Heights, but only used 1.5 of them)
seltzer
lime wedges

I actually tried to freeze crushed pineapple in an ice cube tray in the shape of flowers, but they didn’t pop out easily so I scrapped that idea.  I froze the pineapple rings on a sheet tray, though, and used that as ‘ice’/garnish.  So a bottle of tequila mixed with the juice from the can of pineapple rings, mango nectar, and juice of one or two limes.  Just pour some into your cup, then top off with seltzer.

I only tried some (I stayed sober), but I thought it went over pretty well – people finished it pretty quickly, though I think this was one of my less successful cocktail forays. 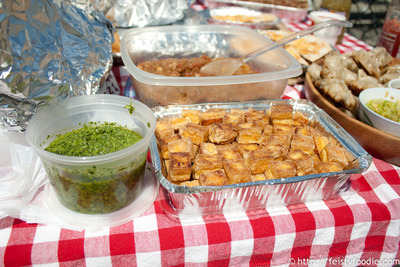 I also made a dish to bring, which wound up being – holy crap – vegan.  The fun part was that everyone thought there was meat in it or that it was cooked in animal fat, but NOPE!!!  It was delicious and I’ve been making this every other week because I love the way it tastes so much; turn tofu so that it tastes practically like animal flesh, without any chemicals.  So good.  I served it with my cilantro sauce for dipping, but they’re good enough to just pop into your mouth and keep eating.  Yum.

Drain tofu well.  I took out the blocks (there were 4 in my 19oz package), layered paper towels down on a cookie sheet, put the tofu over it, more paper towels, another cookie sheet, and then added cans of pineapple on top to weight it down.  I changed the paper towels out every so often, too.

Dredge tofu in flour+salt+pepper+paprika mixture.  I heavily salted the flour, so that I wouldn’t have to salt them after they came out of the oil.

Fry the cubes, turning once after the bottom is golden brown.  As they finish, drain on a rack over paper towels – this helps it retain its crispiness.  Sure, you can drain on paper towels, but it might suffer a little bit.

I actually made this attempt at recreating the sauce from Empanada Cafe.  Though I was told by others that I didn’t quite get it, I wound up really enjoying it and how easy it is to make, and how it uses up any leftover cilantro and extends its shelf life nicely… so I’ve been making it frequently.

1 bunch cilantro, washed and dried
1 shallot, peeled
1 jalapeno, seeded and ribbed (I leave about 3 seeds and that is plenty spicy for me, just a nice background warmth, but you can leave as many or as little as you like)
Juice of one lemon
Olive oil
Salt/pepper

Pulse the first four ingredients in a food processor.  Add olive oil until it looks wet, but not drowning, pulse again, and test for consistency.  You can make it as dry or wet as you like, depending what you want to use it for – a dipping sauce, or a sandwich spread – and season to taste.  I love how fresh this tastes and the brightness it adds to just about anything – I’ve actually been making vegetable soups and adding a dollop on top of a bowl of the hot soup, letting it melt down and adding so much flavor to anything I want zazzed up.  Love.  🙂 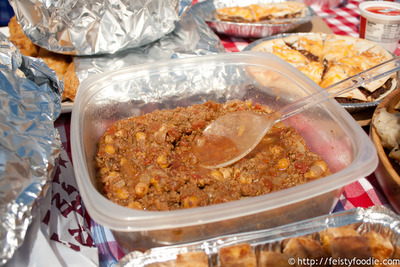 TT made keema, an Indian dish that he said he made too gingery.  I thought it was something I would like… if there was less ginger.  Personally, I really don’t like ginger, though, so that was working against it from the start. 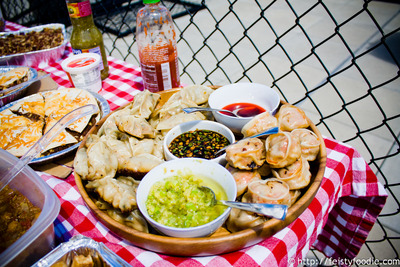 Our lovely hostess made three different kinds of dumplings along with three dipping sauces; pork, spicy pork and pork/shrimp/etc.  I preferred the simplest kind the best, though they were all very good. 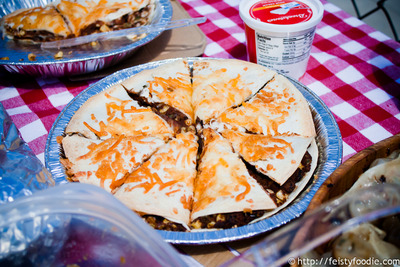 Cheese made a bean pie.  Somehow, looking over my pictures, I didn’t wind up trying this.  I’m sorry, Cheese!  I’m sure it was good though, as people kept eating it. 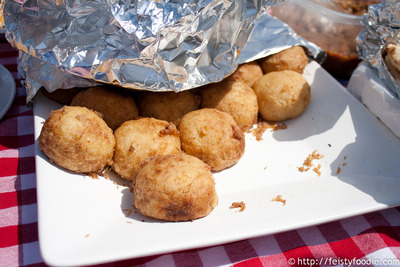 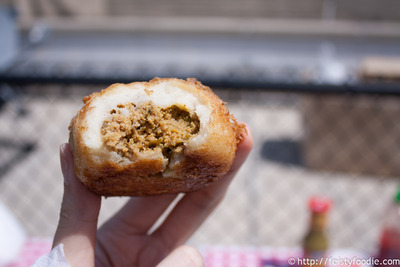 It takes a real expert to make such a thin layer of potatoes.  Trust me; I’ve tried making other items that are similar in concept, and I could never get such a large filling with such a small outer part!  EXPERT LEVEL ACHIEVED.  These were good warm, cold, delicious.  Even BF liked them, which surprised me because they were spicy – not super spicy, but approaching the level I approximate his tolerance to be (some foods, his is higher than mine, others, not so much, and it can be hard to gauge).  I even took some home later, and split them with BF 😉 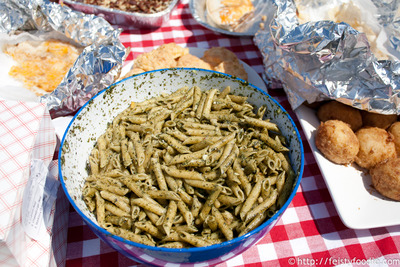 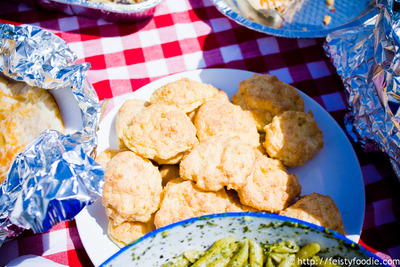 Goats gave a go at pao di quiejo but he said he wasn’t pleased with how they came out. 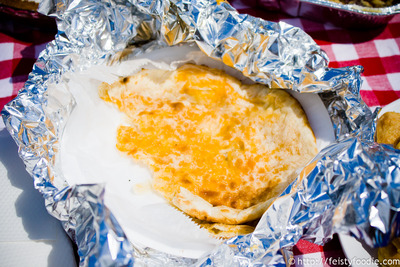 Some of the garlic naan that TT brought to go with his keema. 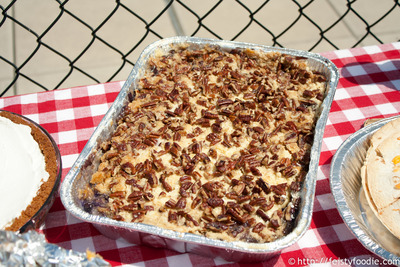 KC also made a pecan blueberry crumble, but I somehow managed to miss this too!  I have to pay more attention 🙁 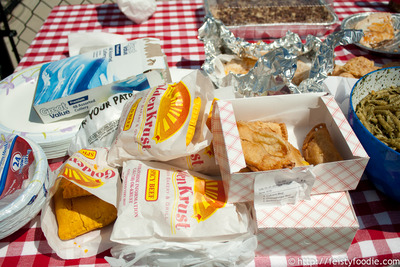 TC decided to bring beef patties and empanadas (on the right in the boxes), after we’d all enjoyed our empanadas at Empanada Cafe shortly before that.  I kept eating one that was weird, but then I had a cheeseburger one and that was really good! 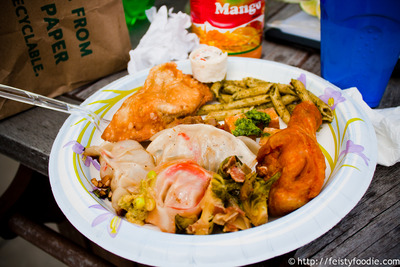 My first plate, a mishmash of everything, including Beer Boor’s buffalo drumsticks (on the right), which I somehow didn’t photograph the big pot he brought.  Very tasty!  All very yummy. 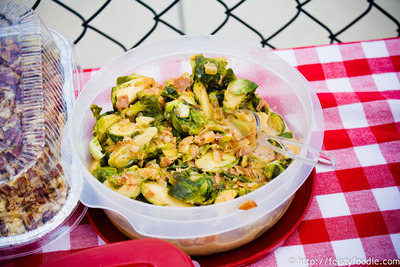 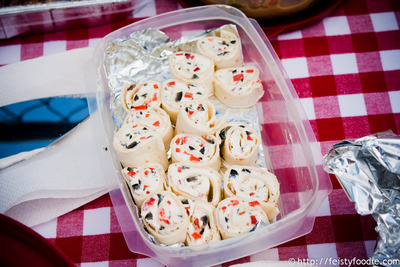 and his girlfriend, M, made cream cheese and veggie roll-ups. 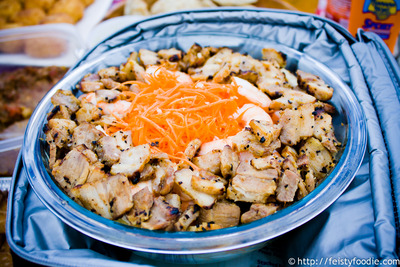 Nommables made a shrimp & pork belly green papaya salad.  That pork belly was bangin’ – I kept going back for just bites of pork belly, haha. 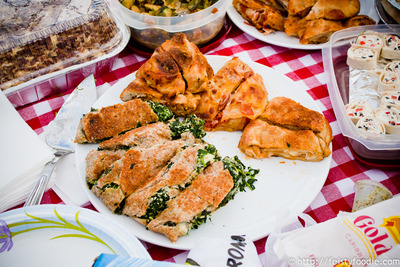 KC also made two different types of stromboli – spinach and cheese, and pepperoni.  Actually, now that I think about it, I think she made three kinds, but I somehow missed out on the third one, whoops!

I think this is the third strombolie type… wahhh. 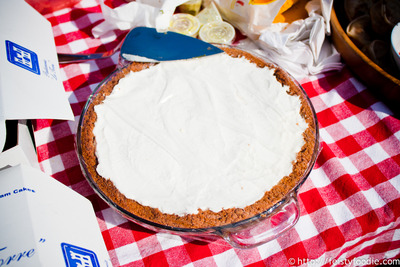 Hungry went all out as well, and also made a (Key) lime pie, which was nice and tart, very refreshing. 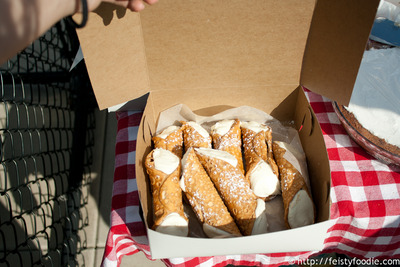 BF won over hearts and stomachs by bringing pastries from our favorite bakery in Howard Beach, La Pasticceria.  A box of delicious cannolis… 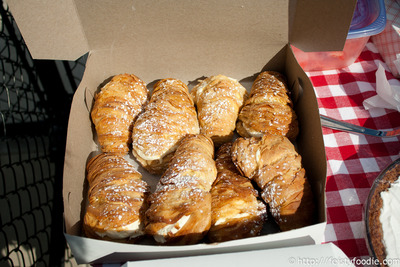 … and a box of lobster tails.  Mmm, lobster tails… I love these flaky pastries, filled with Bavarian cream.  This is the first place I ever had lobster tails from. 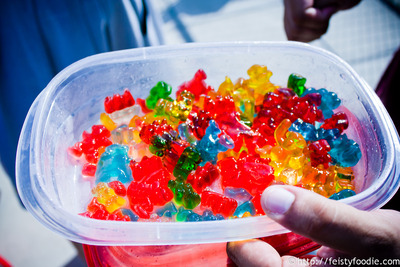 Vodka soaked gummy bears, which are awful and wonderful all at the same time. Two kinds of watermelon: vodka soaked on the left, and regular, delicious and juicy watermelon on the right. 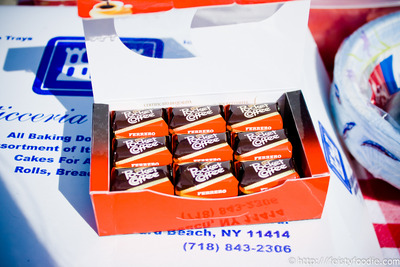 And last but so not least, Hungry made her famous chocolate chip cookies.

While all of these pictures were taken on the rooftop, the entire potluck lasted well after the sun went to bed.  The funny thing is, we sat down and started to play card/dice games, and just before 6pm – the scheduled time for the rapture – the wind picked up.  We all stopped because where it had been sunny (on and off, but still sunny mostly) a minute earlier, the sky had turned really dark and the wind was seriously picking up.  We had to put away all of our cards because they would have blown away.  It was very freaky.

Obviously, you’re reading this and know there was no rapture of which to speak, and everything was fine.  But the sky threatened rain, so we soon packed everything up and went downstairs to continue the shenanigans and enjoy the tons of food we made.  We had plenty to take home as well (thanks for bringing containers, Cheese! I always forget to bring some).

Another successful potluck: I look forward to the next one!!!  (Which, by the time this goes live, should be shortly!)

Love my FBM 🙂 – and as always, if anyone wants to share their recipes below, please do!!!