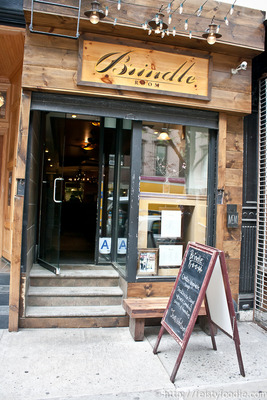 You know when you first meet someone, and they tell you that you have to eat xx item because it’s so good?  If you’re anything like me, you smile and nod politely, file the information away… but you aren’t entirely sure you should trust their taste just yet because, after all, you JUST met them.  I don’t know if a person has the same taste as me – and it’s not that I think that person is wrong, I just don’t know if we agree on food.  I have a few friends whose tastes just don’t jibe with mine, and it doesn’t make our friendship bad – though it makes eating together a bit bothersome, so we just drink together instead 😉

In any case, so it was that Noah of Law and Food kept insisting the burger at Brindle Room was really good, and I just would nod politely and the conversation would move on.  I mean, he was a persistent little bugger, and finally we made plans to have lunch together one Friday afternoon.  Put this dude to the test! 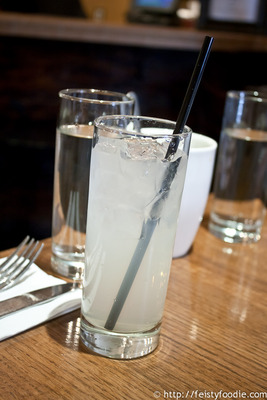 When I sat down, the first thing I noticed on the menu was Elderflower soda – or maybe Noah pointed it out to me, I forget.  In any case, my love of elderflower is well-documented, so I happily ordered this for $3.  Unfortunately, this was less soda, more elderflower – not quite carbonated enough, and a little too sweet (too much syrup).  I guess I’ve become this picky because I make this at home myself quite often – seltzer (Trader Joe’s plain or lemon flavored) mixed with elderflower syrup – to my exact specifications, not too sweet, really just elderflower scented.  Ah well, lesson learned. 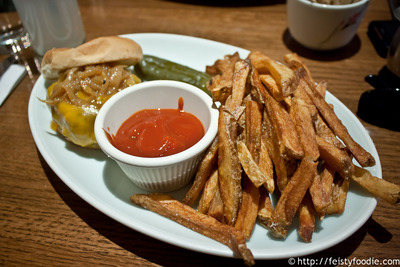 We both ordered the burger, medium rare, though I opted for cheddar and Noah got American cheese, which sparked a conversation on the merits of what cheeses for burgers.  I got cheddar because that’s what the waitress asked – “Do you want cheddar on that?”  If she’d asked about American, I’d have gotten American; I’m not particularly fussy about cheese on my burger except I don’t like Swiss all that much. 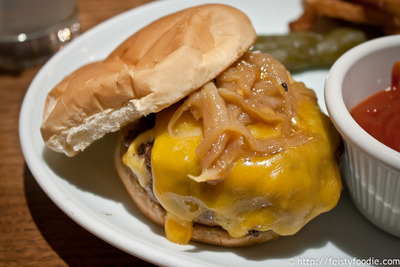 A close up of the burger – topped with caramelized onions, with the cheese melted all down over the burger patty. 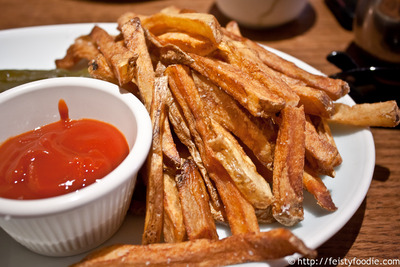 The fries on the side were serviceable, not horrible but not amazing either.  Mine were salted properly, though Noah requested salt for his – and the server brought us sea salt, which was nice.  Some were crispy, some were just normal. 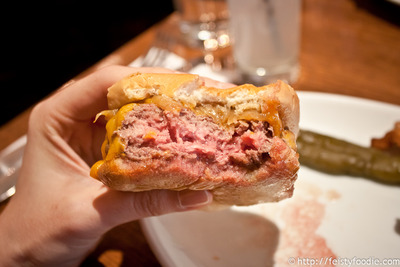 But what you really want to know is about the burger, right?  I was pretty pleased with the burger.  It had a really good crust on it, and was cooked perfectly, very juicy.  I was most impressed by the crust, though; it was almost crunchy as I bit into it, yielding to an incredibly soft, flavorful, meaty center.  Okay, so it turns out Noah knows a thing or two about burgers.  At $12 for the platter, I can’t say I was displeased with the price – though that pickle had definitely seen better days, long ago – and I have been telling all my friends we need to head over for a burger sooner than later.  Bonus: for lunch, it really wasn’t that busy, though the burger is the real deal, legitimately yummy. 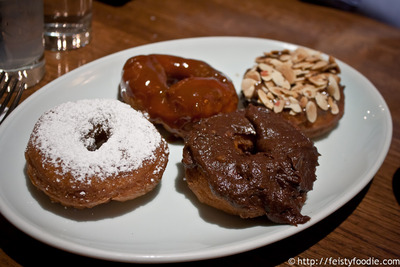 Noah also mentioned that they had good donuts; their latest menu venture is Wonder City Donuts.  The flavors change every so often, but when we found out there were four flavors that day, we decided to order one each and split them.  What?  That’s only two donuts each… 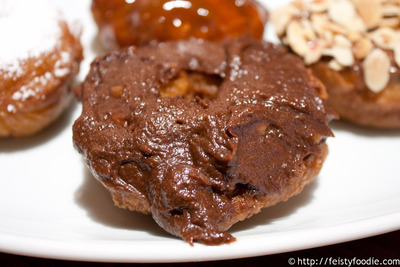 First up: chocolate peanut butter.  This was both of our least favorites of the day.  That’s not to say it was bad; just not to our liking.  The peanuts seemed a little burned to me, and I just didn’t love the goopiness of the donut schmeared with peanut butter and chocolate. 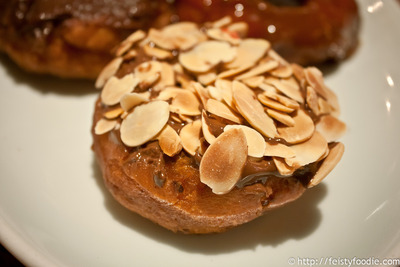 Hazelnut chocolate (I know those are almonds) – this was one of the favorites of the day; the thin slices of almond added a really lovely crunch to the donut.  The textural contrast really made the donut for me. 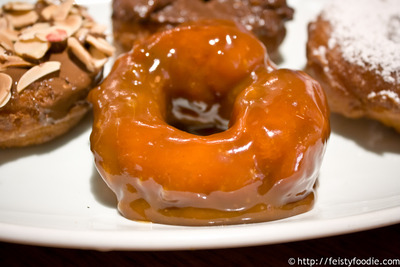 Another winner for the day, the caramel, which was completely covered in gooey caramel.  A sprinkle of salt might’ve made it that much better to me, but as it was, though it looks overwhelming, it wasn’t too sweet by a long shot.  The donut itself, underneath that glaze, was quite crisp and fried perfectly as well.  Yum.  The caramel, which was undoubtedly homemade, was just perfect. 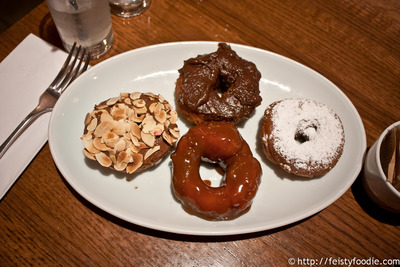 I somehow didn’t take a picture of the powdered sugar donut upclose, so here’s another shot of all the donuts.  The powdered sugar was another that didn’t rank high, it was just plain, average, nothing special.  Tasty enough… but the almond-covered and caramel ones really made the day.  I wonder if they’ll ever combine the two – caramel glazed, dipped in sliced almonds.  Mmmmmm… 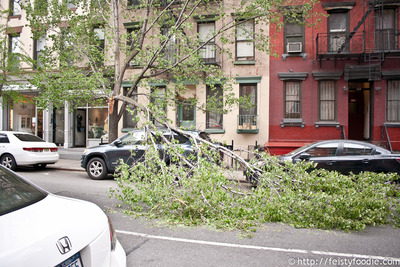 As we stumbled out of Brindle Room into the bright day, I noted that okay, maybe Noah knows about burgers, and I can trust him when he says a burger is good from now on.  We’ll see about the rest of his tastes though – as time goes on, there’s gotta be something we don’t agree on, right?  😉  We wandered over to Good Beer around the block, and as we left there, I earned my street cred in Noah’s eyes by drinking beer out of a paper bag.  I felt like a scumbag, and then we saw this across the street: a tree had decided to commit suicide on someone’s car, but in the nicest way possible (the car was barely damaged, if at all – it was really just leaning on top of it).  A lovely Friday afternoon, which I then continued by walking down to Nom Wah for dim sum with the ladies.

Yvo says: Yeah, that’s a good burger… I will definitely be back for more burgers.  I intend to take all of my burger-fiend friends here to get their feedback… it’s not the cheapest yummy burger I’ve had by a long shot, but it’s really good and worth the price in my opinion.  The donuts are quite good too, and I won’t be against buying those again… yum!  Though I have my eye on some other menu items as well… Also, the burger appears to be lunchtime-only, so get your butt over there!
recommended, the burger especially so