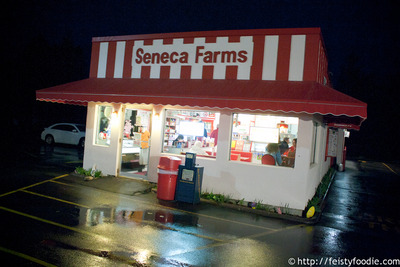 One of the greatest things about traveling with food-obsessed friends is that they’ll do the research to find places to eat.  And so it was that on this trip, StB made one simple request: that we visit Seneca Farms.  Coincidentally, it turned out to be so close to our rental house that we could have walked, and passed it many times during our trips in and out of the area for whatever reason… but it was too rainy to comfortably walk the scant half mile.  It took me a while to figure out why the place looked so familiar, but it finally dawned on me: FeistySis (who is older than me by nearly 8 years) had a toy of sorts when I was a kid that involved Kentucky Fried Chicken.  The restaurant looked like this: a white square topped with a red roof.  I think that’s what Kentucky Fried Chickens used to look like – well, a quick Google turns up this image.  So maybe not exactly the same, but I have this impression… 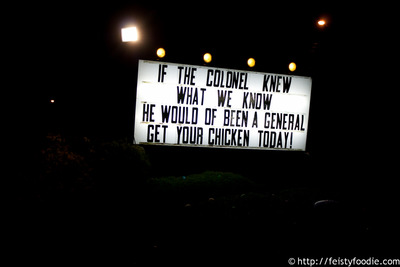 Anyway, StB told us that this place made its own ice creams and was supposed to have great fried chicken.  I love fried chicken, so I was pretty excited.  This sign made me cringe and laugh at the same time – if someone from Seneca Farms reads this, please fix the ‘of’ to read ‘have’ because it’s grammatically wrong the way it is.  And I really dislike improper grammar. 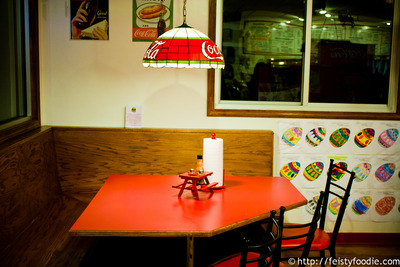 But walking into the place, I was immediately struck by how adorable it is inside.  This looks like something straight out of a TV set for ‘back in the day’ doesn’t it?  Even cuter… 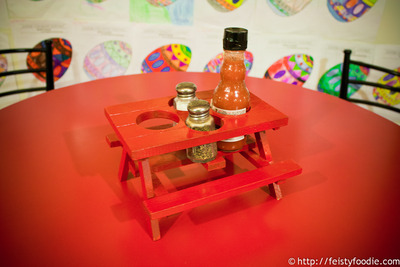 Most of the tables had these teeny tiny picnic tables with holes drilled out to hold hot sauce, pepper, salt, and I think the last hole was for ketchup.  So cute!!!  I wanted one to take home, but had no use for one… or maybe… nah 😉 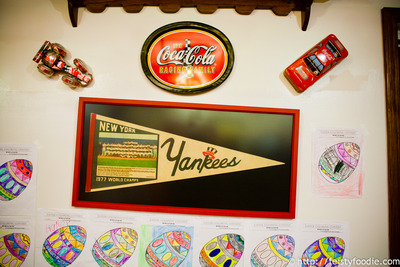 The walls were decorated with all sorts of old school nicknacks and memorabilia.  The Easter egg coloring pages were just up temporarily (we were there mid-April), but added a lot of color. 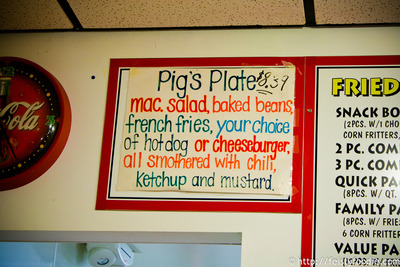 The menu was simple and posted on the wall.  This item called my name – the pig’s plate; hey, I don’t get to be the Feisty Foodie for shying away from 1200 calorie dishes! (that’s a guess).  The Pig’s Plate with macaroni salad, baked beans, french fries, your choice of a hot dog or cheeseburger, all smothered with chili, ketchup and mustard.  Hot damn! 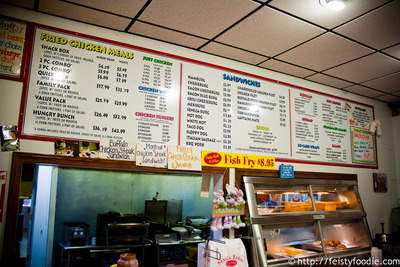 But my friends wisely decided we should get “the Hungry Bunch” fried chicken meal: 16 pieces of fried chicken (mixed white & dark) with fries or mashed potatoes, 15 corn fritters, two pints of ‘salad’.  All this for $36.19; if you wanted just white meat, it was $43.99.  And now that I’m looking at the menu, I realize we could have gotten all dark meat – no extra charge!  (I don’t think anyone ate the white meat really, I know I wound up shredding one chicken breast for this dog that kept coming around the house… it was really sad, but I did my part to try to find his owner! – I typed that literally just as my own dog started batting her food bowl to demand some kibble, so I got up and fed her. Ha) 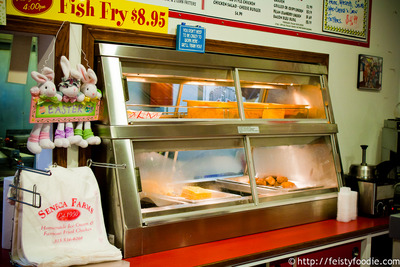 Though there were heating trays, they freshly made our chicken, because we had to wait. 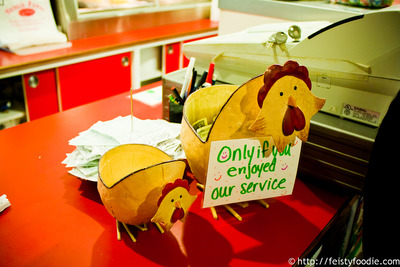 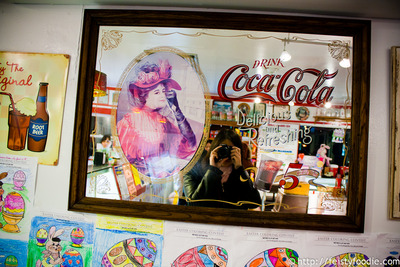 While we waited, we all trooped around to the other side of the restaurant to look at their ice cream. 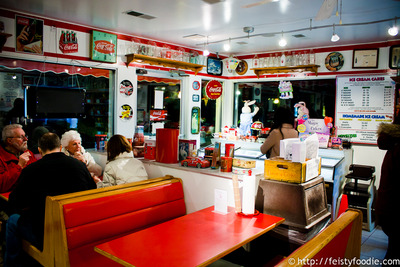 I liked how they separated the restaurant into an ice cream parlor in the front, restaurant in the back.  It means that never shall the place be super packed with ice cream eaters and people who want dinner angrily shuffling their feet back and forth, waiting for a table, nor vice versa.  The little things: I appreciate them.  I also appreciate that the woman working in the back heard us say we were going to get ice cream, so she went through the kitchen to the ice cream area and had someone give us our food up front, instead of having us come back around to pick it up. 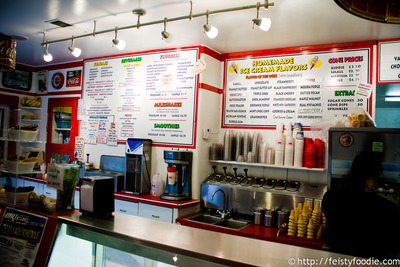 Though the ice cream menu wasn’t particularly unique, I have a soft spot for ice cream places that do things the right way and make everything themselves.  I also appreciated that taking ice cream cups to go for after our dinner wasn’t so unusual; they had clear plastic cups with lids that snapped right over the ice cream so we could put them in the freezer when we got back to the house and not worry about the ice cream melting or taking on other flavors in the freezer if they weren’t covered.  Very smart.  Again, the little things. 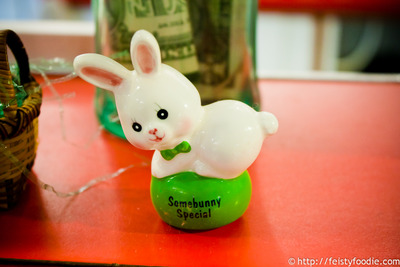 Another little nicknack I wanted to swipe.  How cute is that?  I have a huge soft spot for bunnies. 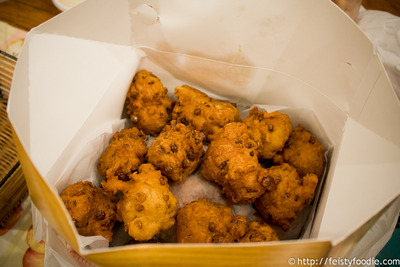 We made our way back to the house and laid out the food on our huge dining table.  I really liked that house; I’ll probably rent it again.  In any case, the fried chicken was topped with the corn fritters. 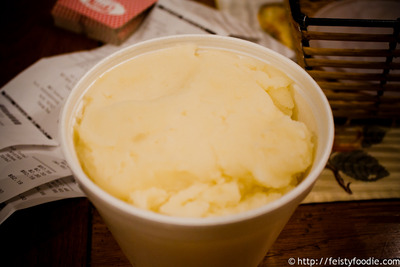 A peek at the mashed potatoes, without gravy. 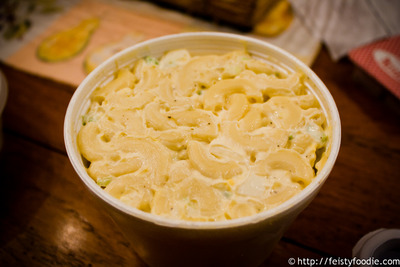 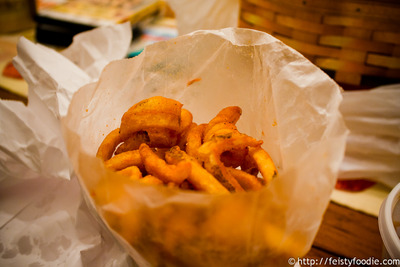 Curly fries; we didn’t ask for cheese, but we already had a jar of Tostitos queso so we used that to dip these in, hehe. 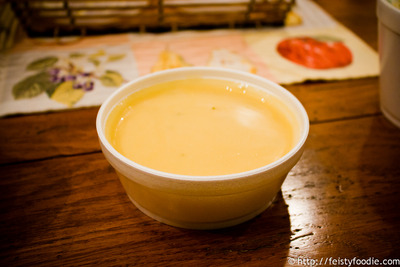 Baked beans, which were listed under the ‘salad’ section of the menu. And here is my first plate.  Funny enough, do you see in the back left of the picture a small clear-ish container?  I was unpacking the food and was pleased to find these included without us having asked.  A few of my friends (not naming names, mostly because I don’t remember who) asked me what it was.  Uhh, syrup guys!  And someone said why is there syrup?  For the fried chicken, guys!  And a few of them were like, “WHAT?!  Who puts syrup on their fried chicken?!” like they never heard of it before.  No, we didn’t have waffles, but still!  I thought it was funny, anyway. 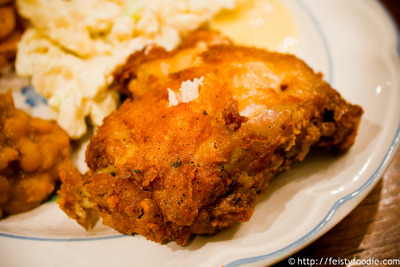 But onto what’s important.  I consider myself somewhat knowledgeable about fried chicken.  I eat it a LOT.  I’ve thusfar concluded that in NYC, you can find some very good fried chicken, but none of it has surpassed that what my dear friend the Beer Boor makes at home.  Fried properly, with a lot of flavor in the crust and in the meat, juicy, moist, perfect.  (Ok, I’m sure not every batch of his comes out perfectly, but it’s good.)  I usually find fried chicken at restaurants lacking in salt.  Not enough salt in the crust or in the meat; one or the other.  It’s like you have to eat each bite with a bit of skin, a bit of meat… and sometimes I get excited and don’t do that.  Well, in this case, though the chicken was the slightest bit soggy by the time we started eating – probably from sitting there – the flavor in the crust was excellent, and the meat was moist, juicy, tender, awesome.  I was in heaven chowing down on the dark meat.  SO GOOD.  I won’t say this is better than Beer Boor’s – afterall, it was soft (through no fault of the restaurant’s), and clearly, I can’t just go to Penn Yan any time I want, so that’s a huge negative… but it was really effing good. The baked beans were slightly mashed, which caused HB to comment that she loved beans and these reminded her (in a good way) of beans she’d had in school cafeterias as a young’n.  We discussed how a lot of times now, beans are very liquid-y, and clearly defined, where these were almost like someone blended half of them before adding in more whole ones.  They were good, though I won’t say I loved these as much as other items. 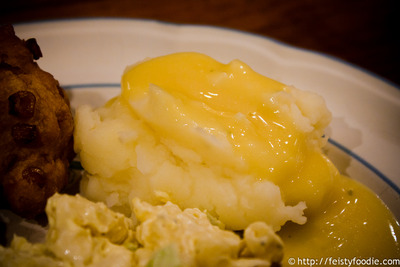 The mashed potatoes with a bit of gravy were perfect.  The best foil to the salty fried chicken.  Yum. I also rather enjoyed the macaroni salad – not gloppy or over-mayo’d, a bit of celery scattered throughout, it was really good. As for the corn fritters; I was hoping and expecting something more like the corn nuggets I get at Roll-n-Roaster.  Deep fried creamed corn, essentially.  I was surprised they were so big, and a bit pleased to see bits of corn on the outside. But then I bit into one and found it to be like a hush puppy.  Moist on the inside, but by and large, very bready with not much corn flavor to it or much taste at all, just plain bread.  Not sweet, not salty.  Just… there.  Perhaps if its name didn’t give me an inaccurate impression, if I hadn’t had any expectations, I might like it better… but as it was, I was soundly disappointed.  No one else seemed to like it much, either, except for Dr.Y who said she enjoyed them.  We let her take the bulk of them, though there were quite a lot!

After we’d stuffed our faces silly, we had some leftovers that I insisted on putting in the fridge – I hate wasting food, and as it turned out, I was able to give the chicken to a starving doggie.  Then we went to watch Morning Glory & How to Train Your Dragon, and couldn’t eat our ice cream… But we were leaving the next morning!  So we did what any normal, responsible adults would do.  We ate our ice cream for breakfast, which actually worked out well because we were able to make it to a few hours away for lunch without starving ourselves or eating too much for breakfast and not being hungry for lunch.  I ordered the flavor of the week, butter almond crunch.  The above is a small for $2.90.

A moment to tease my friend (I don’t even remember which friend it is now! damn): she asked to sample one of the nut flavors (chocolate almond? maple walnut? butter pecan? not sure).  As she took a small nibble from the sample spoon, she suddenly said to me, “Oh! there’s actual [name of nut] in here!”  I just started laughing hysterically like – yeah, that’s why it’s that flavor?!  What did you think would be in there???  Hehe.  She thought it would just be flavoring, not actual pieces… maybe you had to be there, but it was funny!

But back to my ice cream: it was very creamy, smooth… but the best part was the butter almond crunch!  There were chunks of almonds that may have been coated with something, they were extra crunchy, and I found myself happily nomming away on the whole cup quickly and easily, though it was a bit cool that Sunday morning.  So good.  I would totally love it if I lived near an excellent ice cream shop that made all its own flavors.  Oh, wait… yeah, I know why I’m fat 😉

Yvo says: I really enjoyed Seneca Farms and foresee return trips when I go back up for more wine touring.  Oh, I’ll be back.  I will be back… there’s no question about that.  And Seneca Farms is definitely going to see me again.  Oh, they will see me again… sooner than later, I think.  If I were to rent that house for a whole week, say, I’d probably have dinner there 4 or 5 times in a week… and dessert too… that would be a vacation I come home weighing a lil bit more than I started it.  😉
highly recommended