Early on in the week, I planned to go down to the Lower East Side with CT for dinner at the Souvlaki GR Truck’s new restaurant. I read the place was small and without a reservation(I don’t think they take them), I decided we could just go somewhere else in the immediate vicinity that has a plethora of dining options. By the time Friday night rolled around, CT & I were both exhausted from a long week at work and decided to stay local. This is usually the story of anyone who lives in NY, we get too comfortable staying in our own neighborhood. Since the original goal was eating Greek food, we got pretty close with Turkish. It had been a while since we went to or ordered in from Ali Baba.

We were able to walk in around 8 pm without a problem. The restaurant seems to be more popular with the older residents of Murray Hill, so the dinner rush was wrapping up by then.

CT & I were both pretty hungry so we started with two appetizers.

Ezme Salad. A mixture of minced tomatoes, hot spices, garlic, onions, olive oil and lemon juice. This could best be described as the Turkish version of traditional Italian bruschetta. There was a good level of spice that brought some nice warmth against the coolness of the veg. 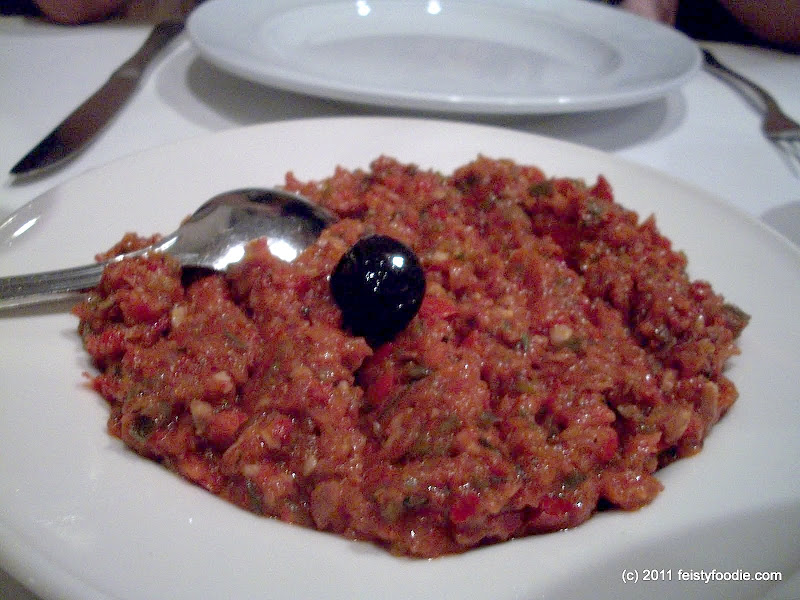 CT says: This was a great start to the dinner. It had a lot of spice and flavor, without feeling heavy or filling me up. I’m a huge fan of tomatoes in almost every presentation, save bloody marys, so I was very satisfied with this dish. Even though it had an olive on top – yuck.

Of course, the famous Ali Baba bread was a perfect utensil for picking up some of the Ezme. 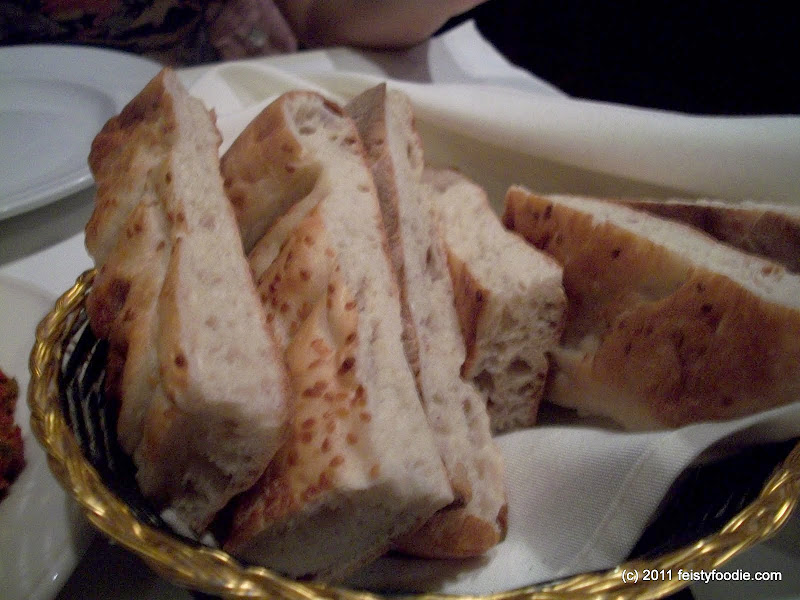 I also decided to try the Kalamar Izgara (Grilled Calamari). Tender pieces of calamari char grilled and seasoned with garlic, tarragon, and parsley. This was quite a large portion of calamari. Unfortunately, it was cooked more to the chewy side. The tarragon took over as the predominant flavor which made it seem as if the calamari was sprinkled with cinnamon. The dipping sauce seemed to be mayo-based, but wasn’t really necessary. 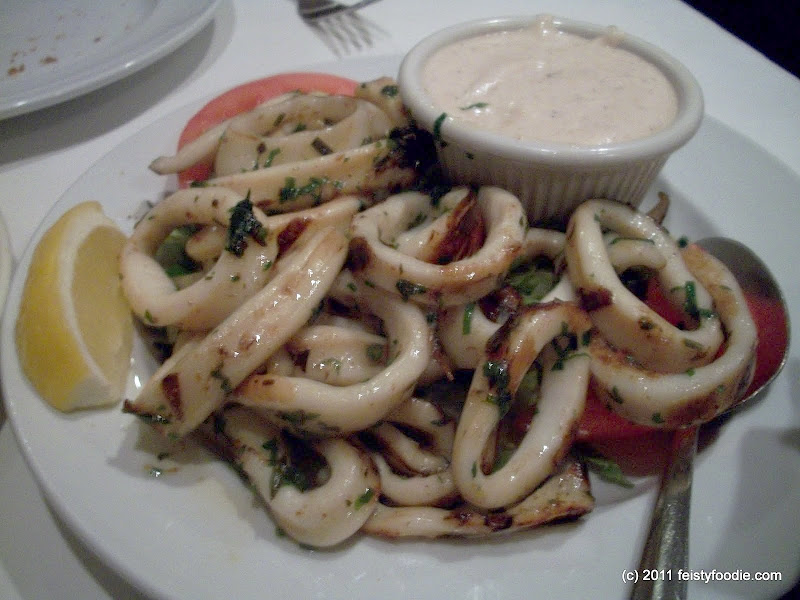 CT says: I didn’t really like this very dish very much. I don’t know if it was the tarragon (I haven’t had many tarragon-based dishes), but I didn’t like the flavor that coated my mouth. I ate a few pieces with the mayo-sauce but eventually gave up.

CT decided to try one of the Pides, which are basically Turkish flatbreads. Based on the waiter’s recommendation, she had the Kusbasili Pide. Tender baby pieces of lamb with vegetables and seasonings. The lamb was chopped into little cubes and when mixed with the spices it was very similar to a sausage pizza, but better. The crust was very flavorful. It also reheats very well the next day. 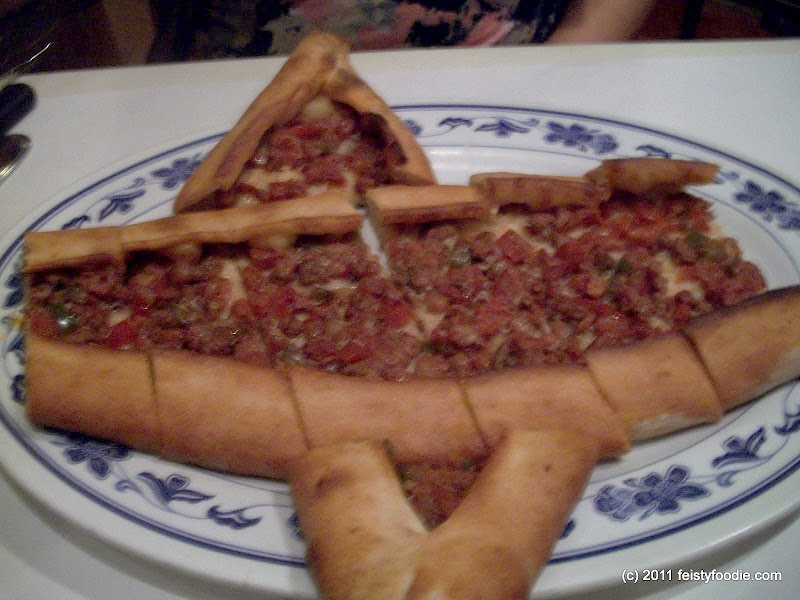 CT says: I was very happy with my choice. While I was expecting something completely different, even though TT told me it would be like a flatbread, I happily gobbled it up. The lamb was nicely spiced and even though it was chopped pretty finely, I could still taste the lamb-flavor. There were some finely chopped veggies too, but barely noticeable – just enough to make me feel healthy that I had some in my dish. The crust was slightly crunchy on the edge, however the middle didn’t quite hold up to the toppings. Still I would happily eat this dish again and will be going back to try some of the others.

Some blurry upskirt action for you. 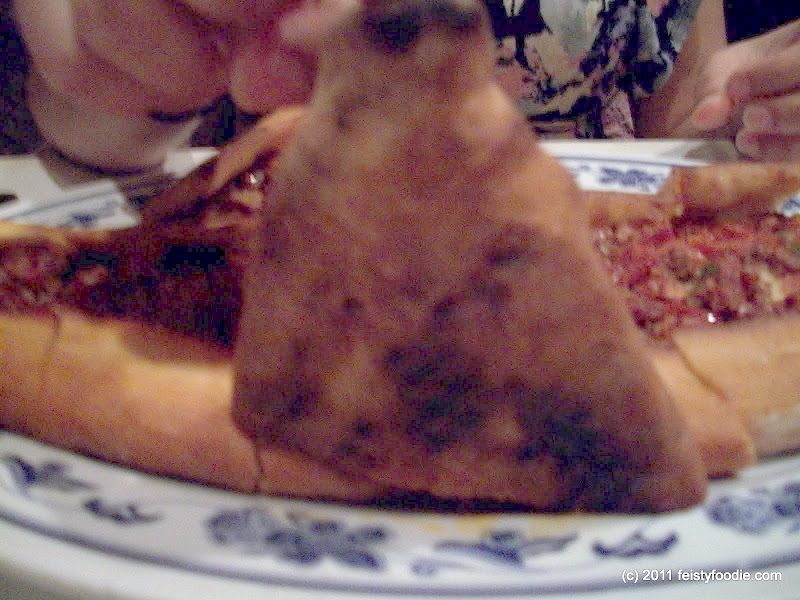 I decided to order something different this time around. Special Spicy Beyti. The Beyti kebab wrapped in a lavash bread served with our special sauce. Beyti is ground lamb with spices. This was like a kebab wrapped in a tortilla covered in white and red sauce. The red sauce had a little bit of heat to it which was nice. It was quite a large serving, so towards the end I just ended up eating the meat. The black thing on the left side was a grilled pepper. There was also a grilled tomato. The lamb was quite tasty with its great “just off the grill” flavor. I never ate much lamb when I was growing but now know that I was really missing it. 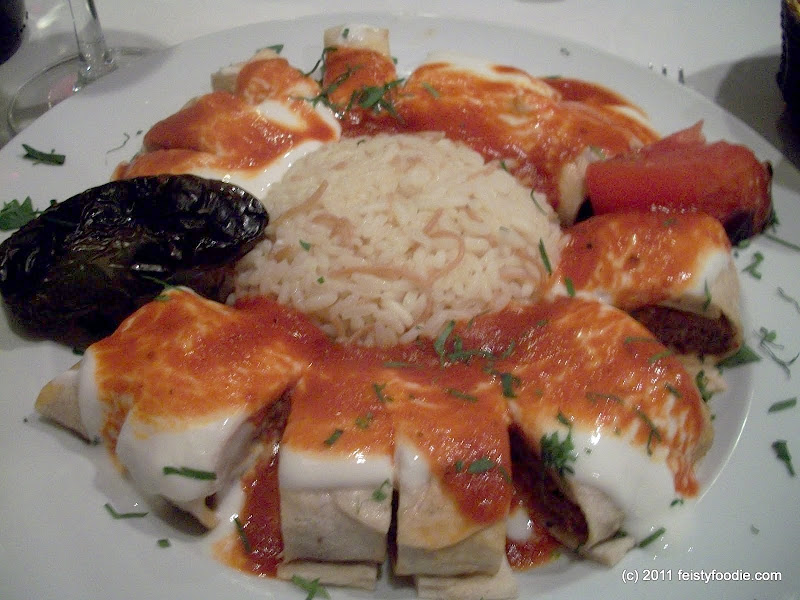 Check out the innards of the wrap. 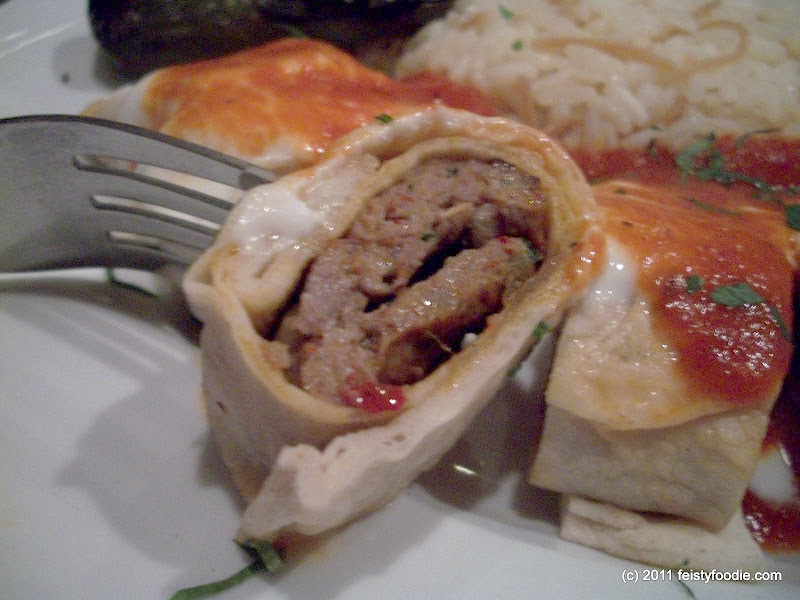 All in all, Ali Baba is a great place for an informal lunch/dinner or for delivery. Although prices have gone up over the past seven year that I have been a customer, the quality of the food has remained high. This is not an easy feat in such a highly competitive environment, like that of NYC. Next time you are in the mood for a kebab, be sure to check out Ali Baba.