One rather warm Friday afternoon, I made my way down to my old stompin’ grounds – across the street from where I used to work – and met up with my buddy, Cookie, for lunch… at Burger Shoppe.  I’ve been many times since they first opened (and I thought I’d posted about it more than once, but apparently not!), but right before I left, they released the mac&cheese burger… which, unfortunately, was only available after 4pm and I went during lunch to check it out.  Boo.  Since then, though, they put it on their regular menu, so this time, I was determined to eat one… 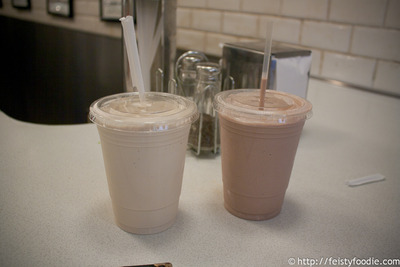 First, though, shakes!  Guinness for me, which was a little too much Guinness this time, and black&white for Cookie. 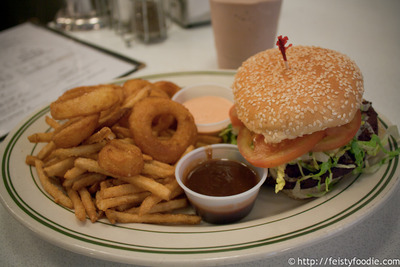 Also for Cookie, a veggie burger with half&half – onion rings and fries, and side cups of barbecue sauce and Shoppe sauce.  She said it was unusually dry, but that she’s gotten it in the past and it’s been pretty good. 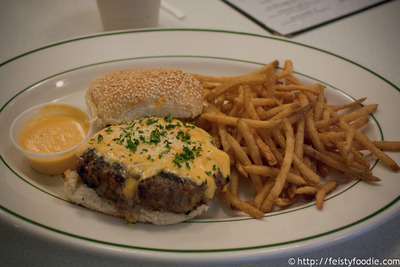 As for me?  I finally got to try the mac&cheese burger. 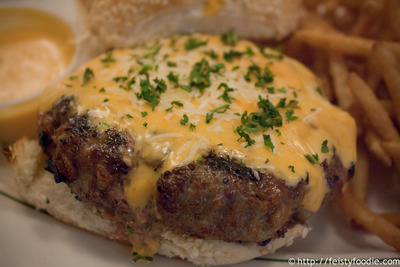 To my surprise, I’d thought it was a burger stuffed with mac&cheese, but it was actually a burger that’d been mixed with cooked macaroni, then topped with a four cheese sauce.  Hmmm.  Interesting. 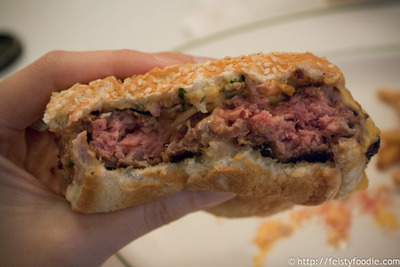 Our server asked how I’d like the burger to be cooked; I said medium rare without thinking about it much.  If I ordered this again – which I might not, given its $12 price tag – I would probably ask for it to be cooked medium.  As it was, with the soft macaroni mixed throughout, the burger itself was overwhelmingly soft and almost mushy, giving it a bit of an odd texture.  The flavor was fine, and I would even say it tasted good, but it didn’t “feel” like a burger.  Each bite just wasn’t meaty enough – it gave the weirdest sensation as I chewed through each bite.  Very… interesting.  I can appreciate what they’re trying to do here – and I might even try this myself at home, though I’d likely use sauced mac&cheese and maybe cut a hole in the center of the burger to ‘stuff’ the mac&cheese into, instead of mixing it throughout – but at the end of the day, I couldn’t say this was something I’d return to order again.

Thankfully, Burger Shoppe’s regular burgers are yummy enough that an odd textured mac&cheese burger is no reason you shouldn’t go have a burger there.

Yvo says: While I can’t say the mac&cheese burger is a must-try (aside from being able to say “I ate a burger with mac&cheese in it!”), it was definitely an interesting experience.  Fortunately, though, having been to Burger Shoppe so many times in the past, I can comfortably recommend you go there for a regular Shoppe Burger, or even try one of their other specialty burgers (which I can’t really comment on because I usually get just a regular Shoppe Burger – they’re good!).  Don’t forget a milk shake while you’re there – oh, and the onion rings – cuz those are also legitimately yummy, too.
recommended for a burger! mac&cheese burger is only OK though