Another Thursday, another TV night and TV dinner for me!  This time, I whipped up a few simple items and made them work together for a healthy meal! 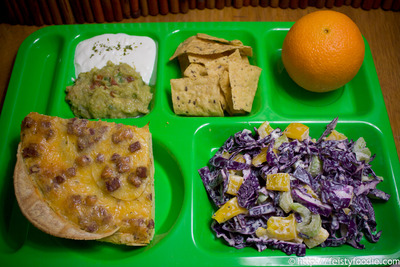 Since the last potluck, I’d been wanting to approximate TT’s quiche, and finally had the opportunity to do so.  Top left is sour cream & guacamole, next to that is the winner of Prevention.com’s 2011 best packaged foods for chips: Laurel Hill Multigrain Chips (which were actually REALLY good), a yummy juicy orange my mom gave me, a quick salad and a thrown together quiche slice. 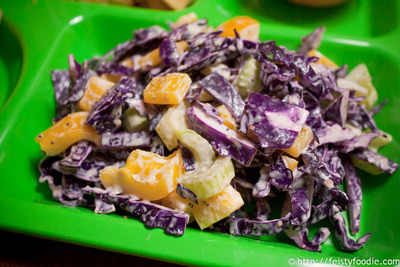 The story of this salad?  Well, a few days before TV night, I was prepping the ingredients so I could put them in containers and just take from them over the week.  It really helps me keep on track when I have everything washed, prepped, cut and all I have to do is mix and match my own salad into existence.  I’d cut celery, yellow bell peppers, and was finishing up with the purple cabbage – which isn’t bitter at all and just adds a ton of really nice, satisfying crunch to a salad – when I opened up my drawer to find that the Romaine had turned all mushy and inedible.  Oops.  I was annoyed and asked TT, who happened to be chatting with me online, if I should go to the store to get Romaine.  He asked, “Well, how far is the store?” and I wrote back, “It’s about a block away up a steep hill” and he responded, “Well EFF THAT!!!  Just eat it the way it is, you have plenty of ingredients already.”  I’m still not sure if he was joking, because he’s always telling me to stop being so lazy, but I decided to go with it and ate the salad just tossed with a bit of dressing.  It turned out that because purple cabbage is so crunchy, it really left me satisfied completely at the end of a big bowl of it.  So I tossed up some more for this night’s TV dinner and really enjoyed it.  Thanks, TT! 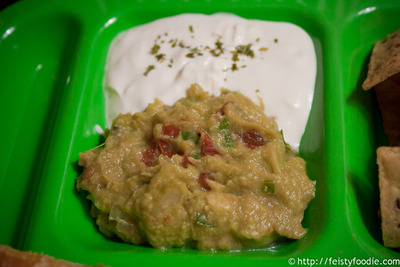 Guacamole and sour cream for the chips. 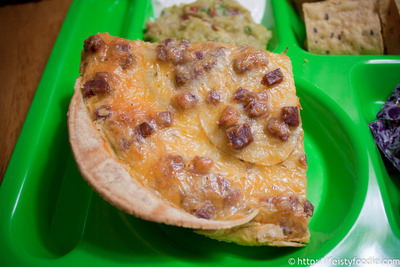 And here is the quiche. 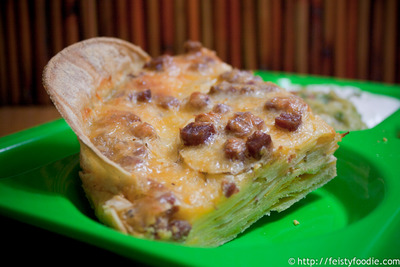 I used what I had on hand, but it was a take off of this recipe that TT had used.  I used slightly less eggs, because I also used a mini slicer and layered thin slices of a single potato (which took up a lot more space than you might think!) into the pan.  I topped with Creminelli Wild Boar sausage that was gifted to me, because it was pretty ‘stinky’ on its own and I figured cubing it small and putting it in a quiche would help temper out the ‘stinkiness’ – and I was right.  The small bits of boar, which floated to the top in the quiche as it cooked, lent the whole quiche a nice flavor, very gamey – in a good way – and added a great textural contrast, a bit of chew to the otherwise smooth bites of quiche.  I also added a bit of Sriracha to the eggs, which gave it a nice background heat.   Instead of cottage cheese, I used sour cream…

-use less eggs
-thinly sliced potato
-Creminelli wild boar sausage diced into small cubes
-Sriracha in the eggs until they were orangey, instead of jalapenos
-sour cream instead of cottage cheese

so I had a completely different quiche, really, but quite yummy.  Give it a try – the fun part about quiches is that once you have the basics down, you can really play with it to make anything you like!