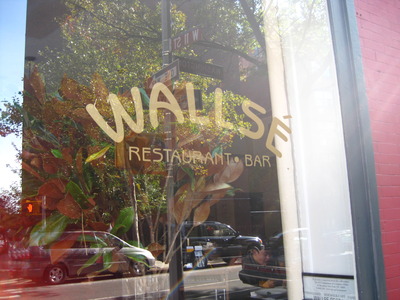 After Marea, Convivio and Daniel, my total sat solidly at 5 Michelin stars.  But where would I go for the 6th and final star?  I hate making decisions.  Thankfully, the choices were narrowed for me as my awesome friend StB emailed me about taking me out for my birthday.  Scheduling is a nightmare with a group of busy girls, so brunch was the best option, and only some places offer brunch… a list was culled, then further cut down as availability on short notice made tables disappear.  Finally, we were left with Wallse, a cute Austrian restaurant in the West Village that was surprisingly empty on a Saturday morning.

Note: Due to unfortunate circumstances, I arrived about 45 minutes late, and SpB arrived about 5 minutes after I did.  I asked my dining companions, who all said the restaurant seated them without a problem, and wasn’t rude or impatient that two of the five guests were running so late.  The restaurant was very empty, though, with an entire second dining room completely empty.  One odd thing, though, when I rushed in and flopped into my seat, I removed my jacket and started to hang it on the back of my chair, my friends immediately said, “No, no, they won’t let you do that” – apparently, they’d previously insisted to my friends that they ‘check’ their coats because the restaurant didn’t want us to hang our coats on the backs of our chairs.  Not a big deal, honestly, although there was no real coat check – they just laid the coats on the windowledge, which made me scowl (if you’re not going to let me hang my coat on my chair, then at least hang it properly, please).  Furthering that slight annoyance was when, halfway through the meal, I glanced up and saw the table next to ours had their coats slung over the backs of their chairs, as did the table next to them!  What gives?! 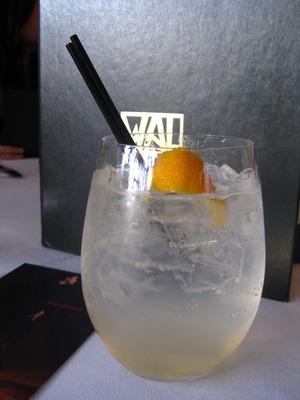 As soon as I’d sat down, StB informed me that a virgin elderflower cocktail was on the menu.  My obsession with elderflower is well known amongst – well, any obsession of mine is loudly and proudly proclaimed, so everyone knows, and when they see that item, they think of me and make sure to tell me, heh.  The above, elderflower syrup, seltzer, and an orange twist, basically comes to what I make at home myself.  Worth $14?  I hardly think so, though I thought it tasted lovely – just not all that special.  And there’s no alcohol! 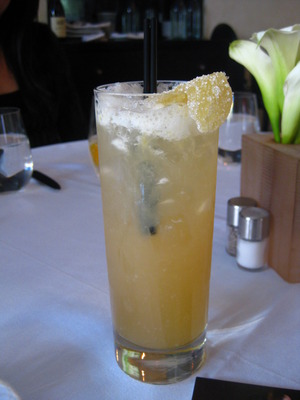 SpB had arrived shortly after me, and ordered a ginger highball.  Very gingery, and packing a powerful punch (whiskey AND rye!), she enjoyed it.  Oddly, after we placed our drink order together, my drink came out after a short wait… and hers didn’t.  Our waiter walked over – we were right next to the bar – and put his hand on her shoulder briefly before saying, “Your drink will be out shortly.”  Well, it wasn’t – it took another good five minutes before it arrived, and I cringed when I saw him put his hand on her shoulder.  Please don’t touch me.  I don’t know you.  You may say that I’m being squeamish, and perhaps I am, but when I mentioned this briefly later in the day, AB immediately said, “I SAW THAT TOO!  What the heck!!!”  So it isn’t just me who thought this was incredibly odd – when was the last time your server at any restaurant put his or her hand on you? 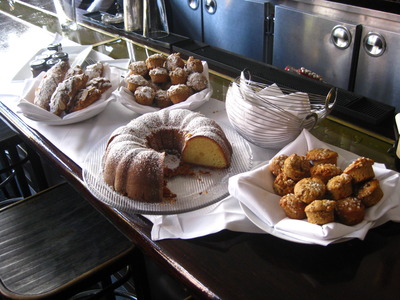 Along the bar was arranged a lot of pastries.  After we’d finished placing our order, I stood up to take this picture because it looked so pretty.  Our bread basket arrived, and famished, I sat down to eat a piece of bread.  My friends mused aloud about the bread basket not being brought until we’d ordered; I’m sure they were hungry since SpB and I were both so very late.  We’d actually also ordered a pastry basket – since we were so hungry – and waited. 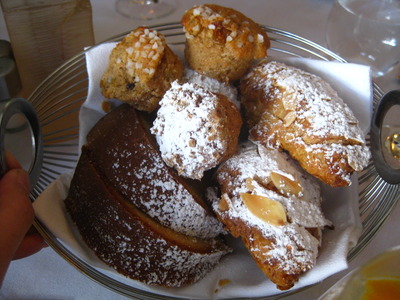 After another five minutes passed, the waiter swung by, looked at us almost in surprise, and then said “Oh, right, you guys wanted a pastry basket, right?”  I dumbly nodded, not even knowing how to take that.  Did he just completely forget?  It was just… too casual, spoken as though we were friends at a party rather than sitting in a restaurant.  Awkward.  The above arrived a minute or so after he said this; I suppose all he had to do was take a basket, line it with napkins, walk to the bar and cut a few slices of the cake and stick some muffins in the basket.  I had one of the mini muffins, which was chockfull of pistachios, and quite moist.  The real star of the show – that I tried, anyway – was the cake!  I don’t know what kind of cake it was, but it was dense like pound cake, moist, slightly lemony, and just wonderful.  If I could bake, I would totally try to figure out what kind of cake that was and make that.  It was really, really good.  The other girls took their pieces and ate them happily, so I imagine the rest of the basket was quite tasty as well. 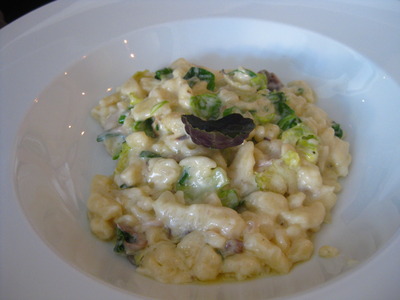 SpB ordered the spatzle with braised rabbit.  I tried a teensy piece and found it, as expected, pillowy, a little cheesy/creamy.  She seemed to like it sufficiently, though I know she was expecting something slightly different, as she mentioned she’d ordered spatzle from another restaurant quite recently and had gotten something else. 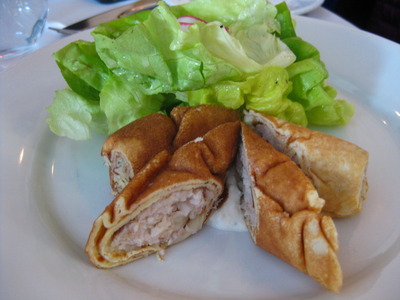 StB and AB both ordered the palatschinken with smoked trout.  AB asked our server what palatschinken was, and he said that it was “like a crepe, a sort of pancake” so she remarked that sounded delicious, and ordered that.  Seated to my right, when it arrived and she took a bite, the first thing she said was, “Oh – it’s cold?”  This surprised all of us; when I heard crepe, I thought it would be warm at the very least, a freshly made crepe stuffed with the ingredients, then served? 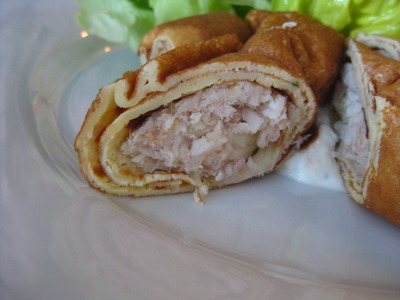 StB ate hers without much remark, though AB started to feel sick after about half of it.  Cold food doesn’t sit well with her earlier in the day, and we all thought it would have been prudent for the server to mention it was a cold dish.  (I actually laugh usually when I go to my favorite Vietnamese restaurant and get the waiter who will tell me repeatedly that my order is cold – I order a cold noodle dish, and a cold appetizer usually – but now I get it.  Some people don’t know.) 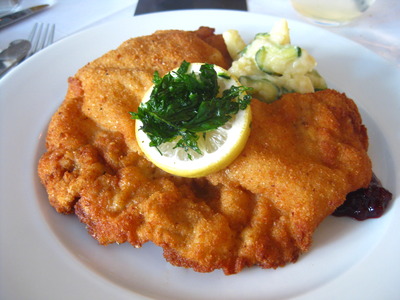 HB and I (yes, HB was there!  Of course she was!) both ordered the wienerschnitzel.  It looks so good, doesn’t it?  The top right-ish, behind the schnitzel which pillowed upwards, was a scoop of potato-cucumber salad, which I really liked.  It was creamy without mayo, and seemed to be just well-cooked potatoes that started to cream themselves as they cooked, mixed with thinly sliced cucumbers and maybe a small dash of mustard.  Yum.  Underneath was a bed of lingonberry sauce.  As for the schnitzel – well, I’m pretty sure that was pork, but even that aside, the breading fell off as I cut into it.  The taste was fine, and made better with the lingonberries, but it was not $26 good.  HB didn’t particularly like her schnitzel, actually, finding the flavor flat and the breading falling off was a huge FAIL.  Unfortunate, because though I thought it was sufficient as a piece of fried meat, it really was not $26 worthy, nor even YUMMMMMM worthy! 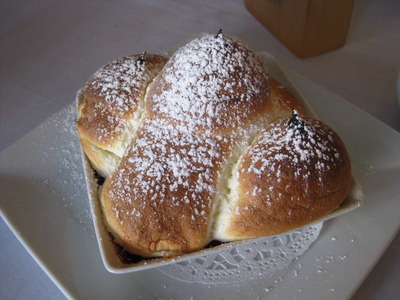 Despite most of us not really being enamored of our food, AB insisted we get dessert to celebrate my birthday.  The dessert menu for brunch was short – three items – apple strudel, sacher torte (chocolate cake), or salzburger nockerl.  I decided to ask what the salzburger nockerl was, though our waiter had proven by this time he was either high, slow, or a combination of the two, and was informed that it was “pastry cream with merengue on a bed of huckleberries.”  This sounded interesting, so I ordered one for all of us to share – and good thing, because it was actually pretty big.  I was surprised when it came out – huge fluffy clouds of browned merengue on top… 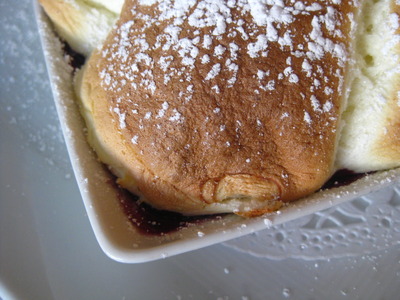 the bed of huckleberries peeking out… and spooning in, the topping was cakelike, but in the airiest, lightest, fluffiest way possible.  I really enjoyed the dessert, finding the mix of slightly tart berries with the fluffy, happy cloud the perfect way to end the awkward meal. 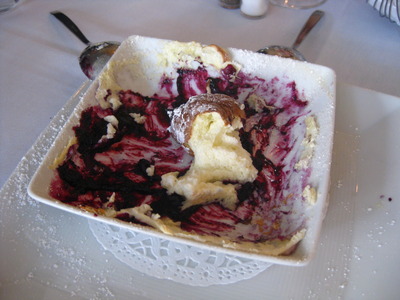 Judging by the plate at the end, I’d say everyone felt the same way.  (We’re all extremely polite and left one bite – I guess someone could have just said “mine!” and taken it, but that’s not really how we roll.)

And with this, I completed my quest for 6 Michelin stars in October. Once again, I extend my sincerest thanks to all who made this possible – I have absolutely the most wonderful friends and could not think of a better way to turn 30. Love you guys!!!

Yvo says: Though I am deeply grateful to have wonderful friends who took me to a Michelin starred place for my birthday, we all agreed that the food was not Michelin-worthy, and that the meal was not that awesome (so please don’t take this to mean I’m dinging my friends, who were kind enough to take me here; not at all, it’s a ding on the restaurant for its overpriced brunch).  At the end of the day, this blog is about the food, and this is what I say: I’m going to learn how to make that cake and that dessert, and go elsewhere for my spatzle and wiener schnitzel needs.  This place needs to re-train that one waiter and rework its brunch menu a bit… though I later found out it constantly gets dings for its brunch, so maybe it reserves the best for dinner?  Who knows?
not recommended for brunch