Two of the more famous BBQ restaurants in the Austin area are Kreuz Market and The Salt Lick.  Last year, I went with MSC and some friends to Kreuz’s.  Those were my pre-blogging days, so no pics for you.  Let me just say it was really good and really cheap.  Kreuz is the restaurant that Hill Country in NYC is based on and obviously the original is much better.  This time around it was off to The Salt Lick.  It was about a 40 min drive from Austin into the middle of nowhere.

The Salt Lick is probably the only place in Texas that doesn’t sell beer.  That is saying a lot when they actually have drive-thru beer stores here.  We picked up some locals brews on the way there. 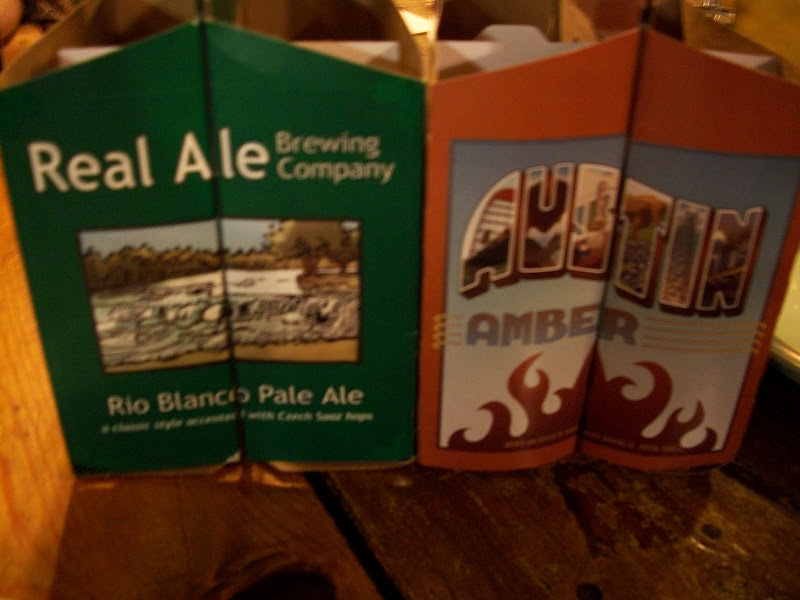 We got the Rio Blanco Pale Ale from the Real Ale Brewing Company and the Austin Amber from Independence Brewing.  Both were tasty beers that complemented the bbq well.  I’ll leave it to the Beer Boor to review(if he goes on a visit to Austin).

Even on a Tuesday night there was a wait, the place is that good.  Luckily, they have a large area outside full of picnic tables where customers can crack open their beers/wine early and chat while they wait.  Wouldn’t you know it but just as we opened our first beer, our name was called.

Upon entering, the first thing you see if the massive fire pit where all the meat is cooked.  It is not the traditional smoker that you expect from a bbq place.  MSC said the grillmasters usually let girls go behind the counter to get some up close pictures of the pit.  Thanks MSC for the nice shots! 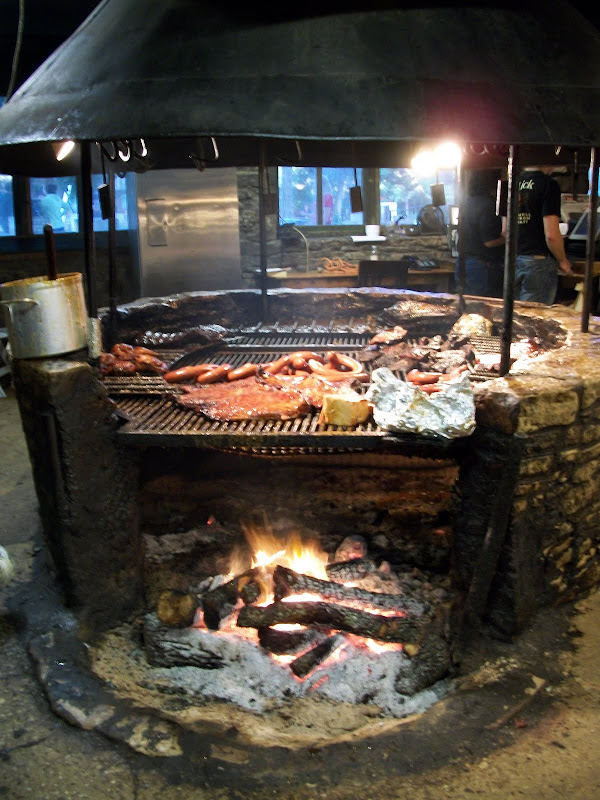 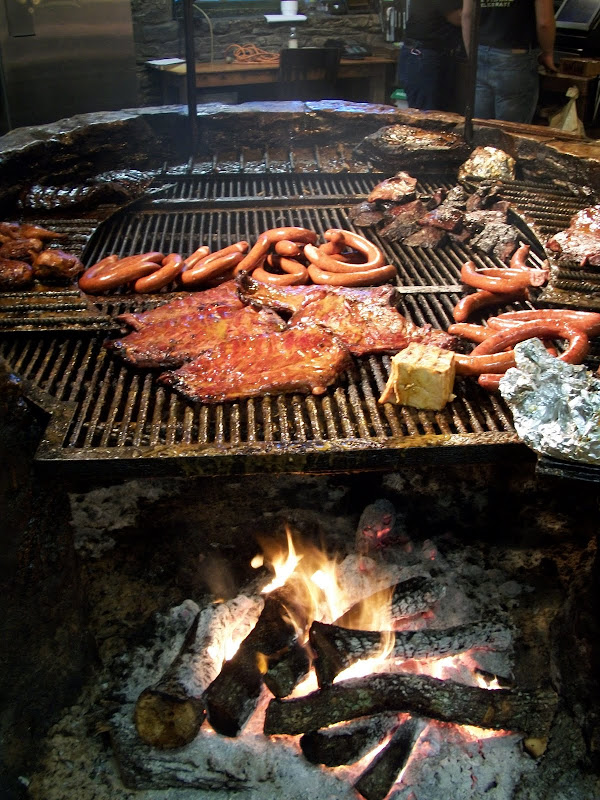 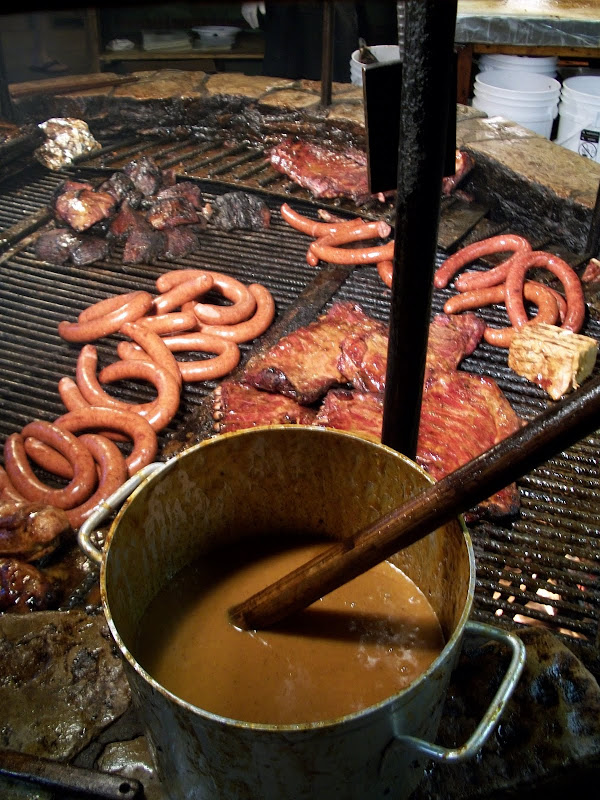 When we were seated our waitress brought over a large bucket of ice to put our beers in.  They probably do this for everyone, but I thought it was a nice touch. 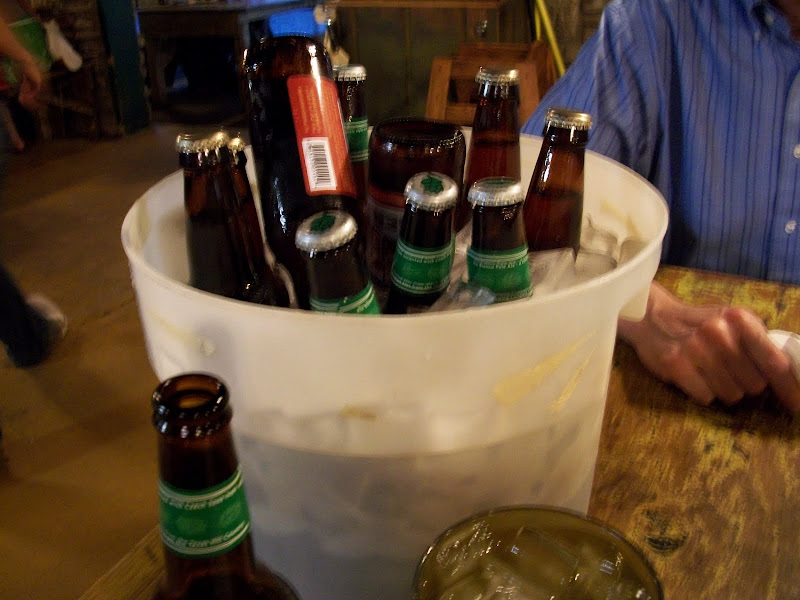 MSC already informed me that they offer All You Can Eat, so it was pretty obvious what I was getting.  I was pretty shocked when I saw that AYCE is only $18.95 per person and the whole table doesn’t have to participate.  My Dad manned up and did the AYCE too, while MSC & Mom got a la carte. 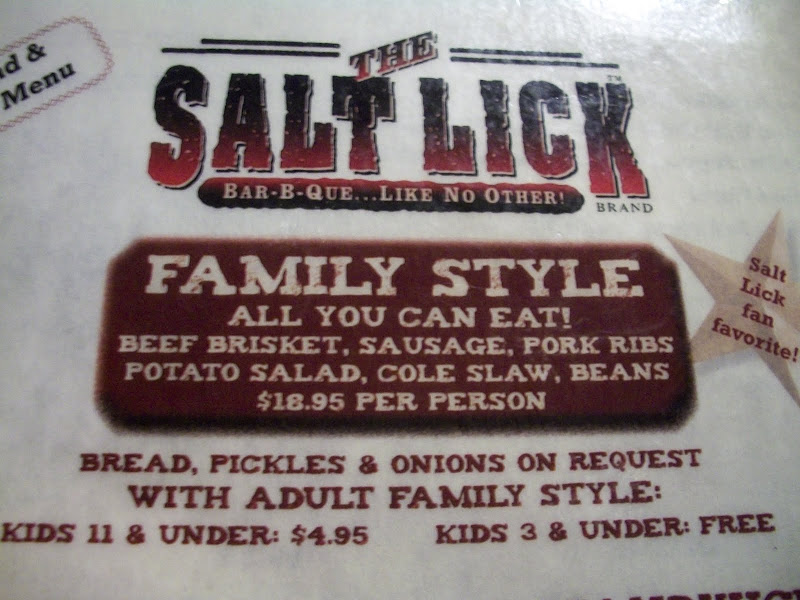 Our first plate started with everything; brisket, sausage, and pork ribs. 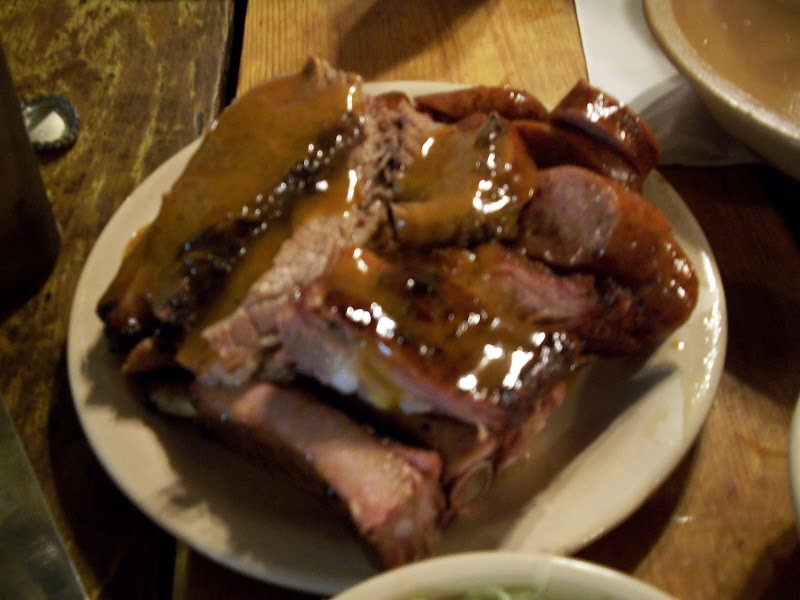 The first thing you notice is that the meat is actually pretty hot.  Usually BBQ is slightly warm from the low and slow cooking, but since it is grilled here everything is cooked at a much higher heat.  Unfortunately, there was not much smoke flavor in the meats.  The homemade BBQ sauce is the star of the show. Their spicy BBQ sauce with habanero is addictive. I think it was a toss-up between the ribs and sausage as to which was the best.  I think we put down 2.5-3 plates.  Not my best showing, but my stomach thanked me later.

Here are some up close shots of the meat.  Notice the nice smoke ring and bark on the meat(at this point I haven’t learned all the features of my camera so it is blurry, but I am improving). 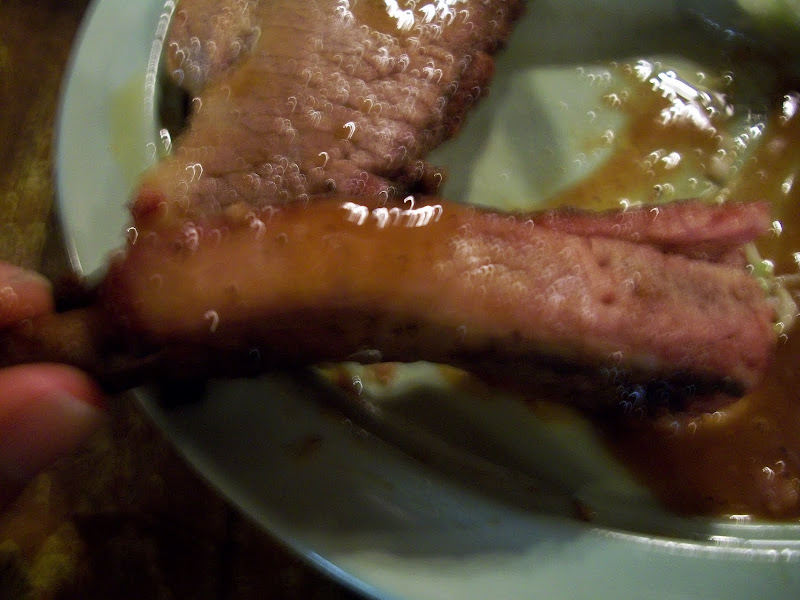 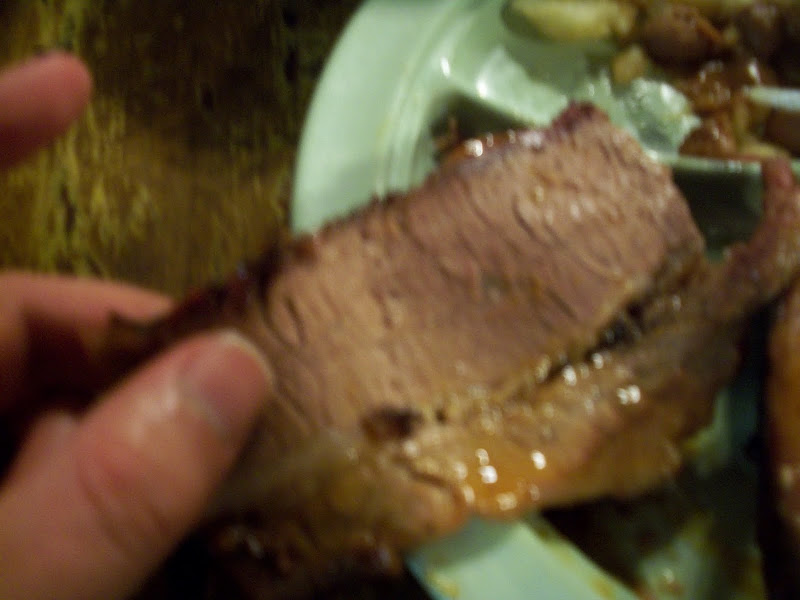 In addition to all the meat you eat are the unlimited sides.  Although its an amateur move to fill up on sides.  I had a little of each to help the meat go down a bit easier. 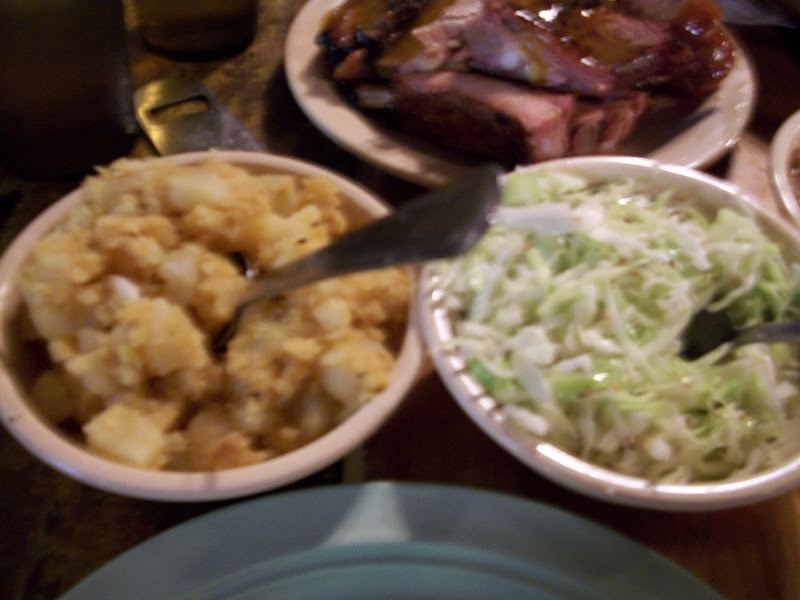 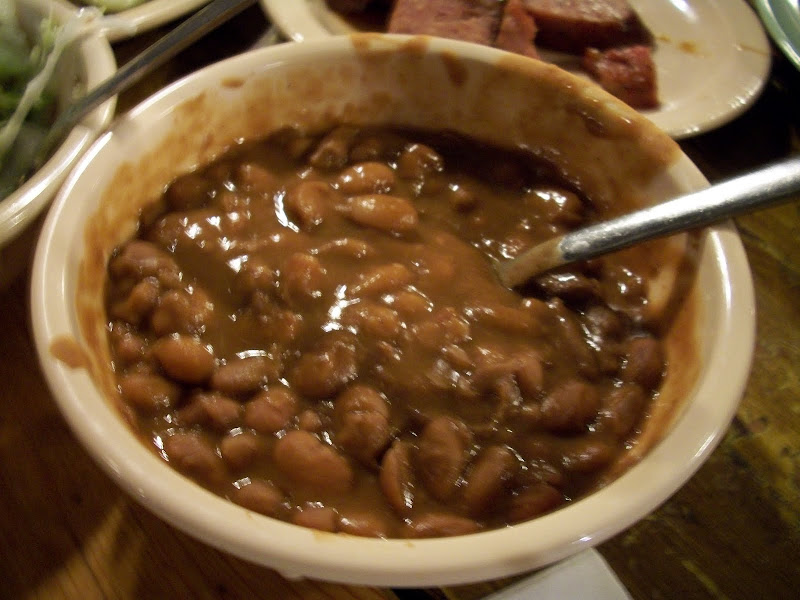 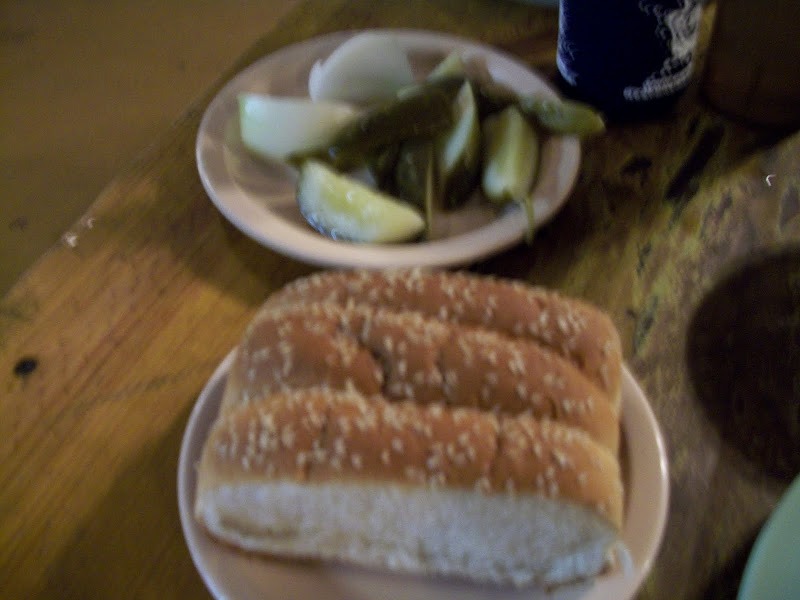 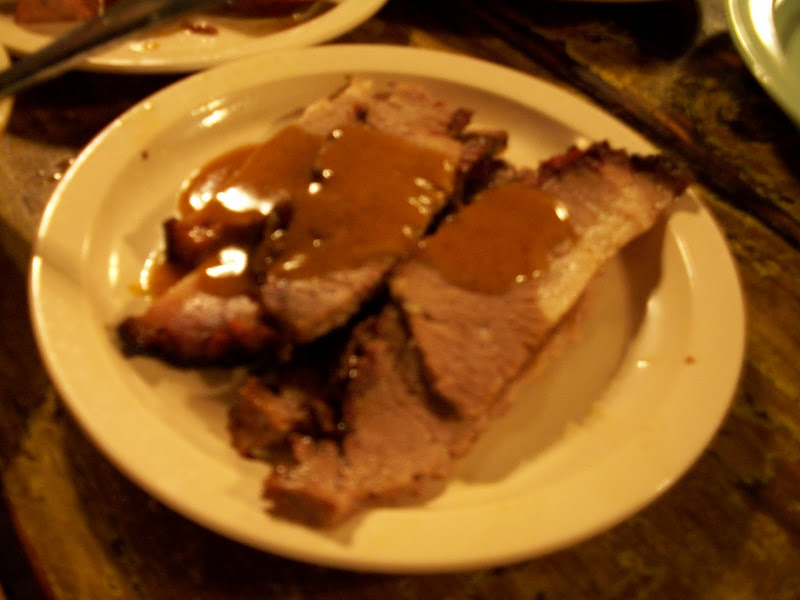 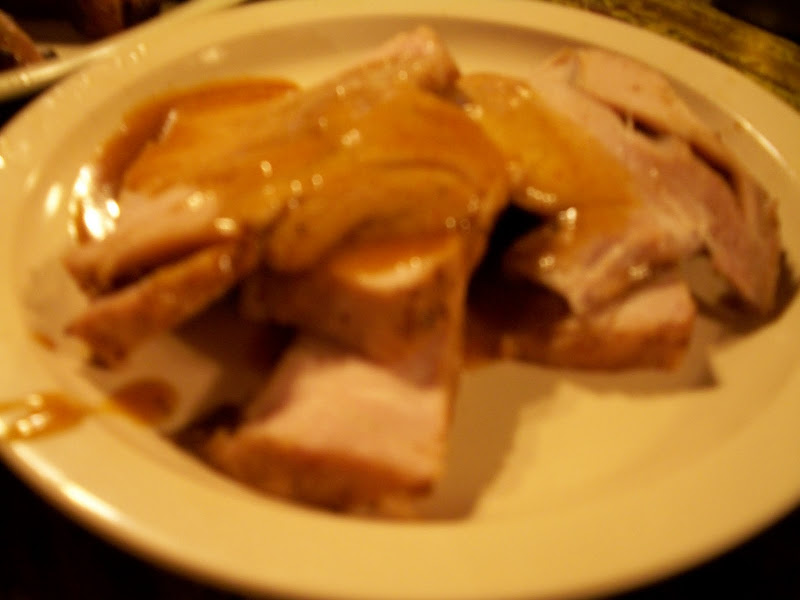 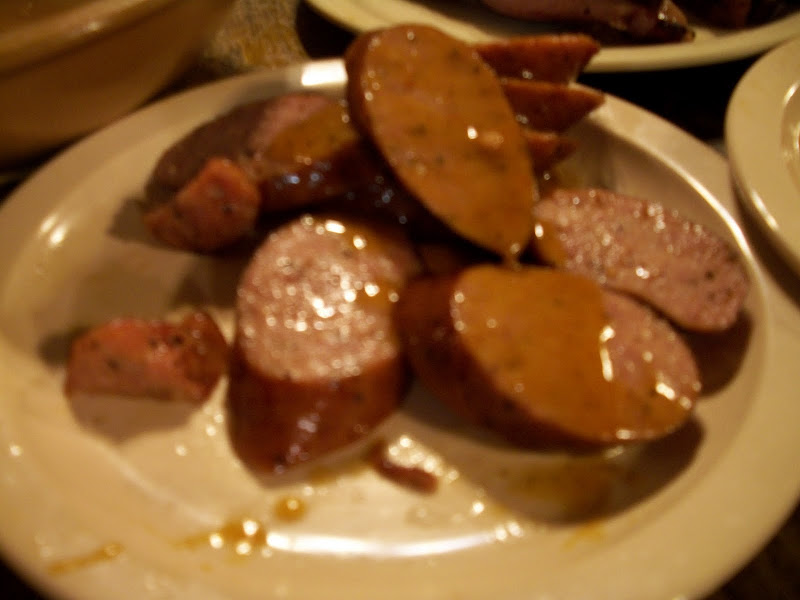 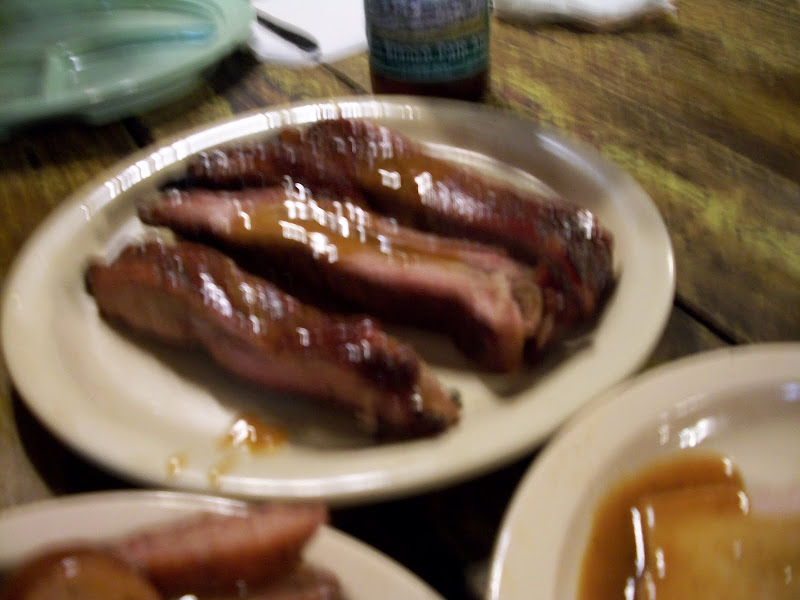 I tried some of their turkey and it was amazing.  Very tender and juicy.  Not something easily accomplished even cooked the more traditional way in an oven for holidays.

The Salt Lick also offers a couple different kinds of desserts including Pecan Pie.  Unfortunately, we were all too stuffed to even think about dessert.  One last perk to this place is that you are allowed to take home your last plate of food from the AYCE deal.  The key is to ask for another plate when you are just about done, so you can have almost a full plate of whatever meat you want for leftovers.