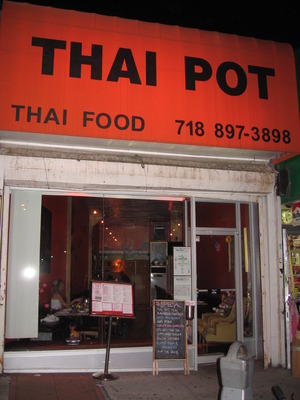 I walk by Thai Pot all the time, and have even taken one of their takeout menus (in the little metal bucket next to the door in the above photo) home before to peruse.  I’m always in search of good Thai food, but rarely find myself at a Thai place for fear of being disappointed.  After last week’s good experience, though, I decided to blindly try this place.  Alone.  Despite it kind of feeling like a take-out place, despite my suspicions that it was probably owned by Chinese people who weren’t really sure what Thai food was, despite the fact that it was mostly empty almost always… WHY NOT? 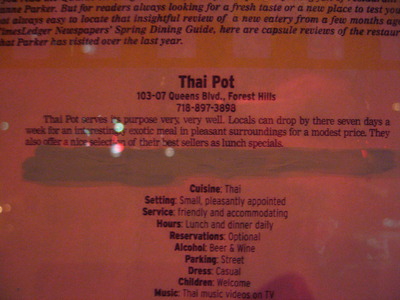 Even when I noticed the review posted prominently in the window had a large portion just whited out… with green white-out… I waltzed right in, undaunted.  Whee!  (From my extremely outstanding-citizen years during high school, I learned that if you photocopy white-out, it doesn’t show up as white-out.  You may have to photocopy it a few times, but it totally works.  Yes.) 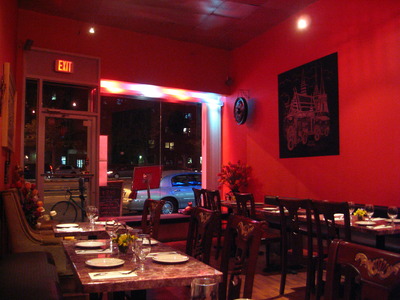 The inside decor immediately warned me… this is not a take out place, despite it appearing to do most of its business via delivery and having a pretty sweet lunch deal.  More like an upscale-ish Thai place, or at least, one in the city, than I’d expected, but almost completely empty when I walked in (a table by the door was occupied by two older Asian women).  I was not deterred however… I wanted my damn pad thai!  Having Snorlax IM me an hour before “I’m going to Boon Chu tonight!” hadn’t helped.  Whatever.

I’d picked out a lot of dishes I’d intended to order all for me, taking home the leftovers, but decided instead to stray from that when I saw the menu at the restaurant, which varies slightly from the takeout menu.  Originally, I’d wanted: beef satay, pad thai, pad see yew, massaman curry (to try Thai curry for the first time!), and possibly one of their house special dishes, something described as “sauteed crispy pork with fresh Chinese broccoli and Chef’s homemade sauce”.  Yummm!!!  But when I got there, the menu had a “Specials” insert, so I decided to alter my order a bit…

Before I begin, I want to tell you that the curry section of the menu describes five different types of curry: red, green, massaman, panang, and jungle.  Three of those five are described as containing coconut milk, and four of those five are described as spicy.  As someone allergic to coconut, and not very keen on spicy things, the clear choice for me to try Thai curry would be the one that was neither spicy nor contained coconut milk… right?  Right!  (My previous conception that all Thai curries contain coconut milk appeared to be wrong!  Woohoo!  I love curry and really wanted to try Thai style curry.) 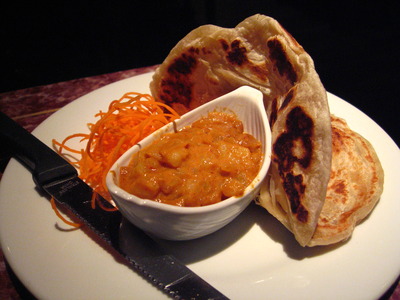 The specials insert listed an appetizer roti massaman.  I love roti.  This meant I’d be able to try the massaman curry without ordering a whole dish of it, so that worked for me.  I took one forkful of the massaman curry and devoured it eagerly.  Except a few seconds later, a familiar taste and a familiar feeling began in my tongue.  Ummm… are you sure there’s no coconut in this massaman curry???  The roti was thick, chewy, and delicious.  It held forkfuls of the curry nicely.  WHICH I ATE ANY DAMN WAY because damn it, it was really freaking tasty, swelling tongue be damned.  I dogged this quickly. 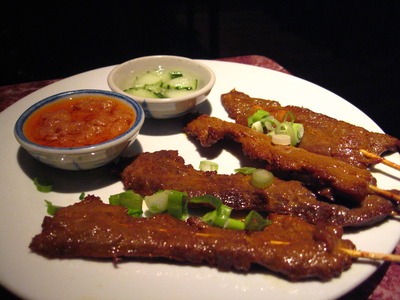 I stuck with my intention to order beef satay, because… you guessed it.  I love satay.  This came with a crisp pickled cucumber salad on the side, which I love, and peanut sauce, which I also love.  While the beef didn’t lack flavor, and was remarkably tender, I am very partial to the kind of satay that is cubed and comes off the stick easily in pieces.  I probably won’t order this again here, but it was pretty good.  I only ate one skewer’s worth, before asking them to pack it to go for me (and putting the rest in my lunch the next day).  Interestingly, when she packed it, despite the fact that I’d finished my cucumber salad already, she packed me a new container of the stuff.  How thoughtful and YUM! 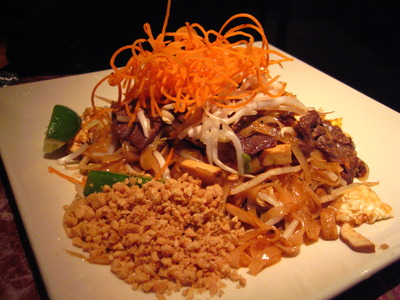 Of course I had to try the pad thai!  Beef was a bad choice, as the beef was a bit chewy and tough.  I couldn’t bring myself to order chicken though (I really detest most chicken in restaurants), my other entree was pork, I don’t really like shrimp (which bears a $2 surcharge, anyway)… I probably should have stuck to vegetable instead.  The pad thai itself was fresh, light, and ever so slightly sweet.  It was perfected by a squeeze of lime, though the lime provided was a touch dry.  Otherwise, I found this perfectly suitable and will definitely be back to order this again.  I also wound up taking about half of this home… for lunch the next day. 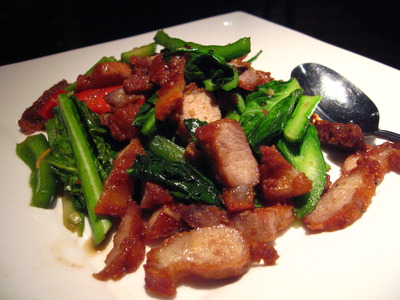 I stuck with my decision to order from the house specials section, though the menu at the restaurant listed it slightly differently, it appeared to be mostly the same (though the Thai name was distinctly different).  Crispy pork with fresh Chinese broccoli and Chef’s homemade sauce… served with a small mound of rice (that I didn’t touch, but did take home with me).  Though I can’t say that this really reflects Thai cooking – my understanding of Thai cooking is that it’s very flavorful, encompassing as many tastes in one bite as possible – sour, salty, sweet, even spicy, all at once, a perfect balance – this was pretty damn yummy too.  The pork, crispy as though it’d been sliced after a whole pork roast… the slightly bitter Chinese broccoli, which I adore… and a lightly fragrant slick of sauce over it all… I really enjoyed this dish greatly and was extemely happy I’d ventured outside my comfort zone to order it.  It sealed my impression that I should go back and try more dishes.

At the end of all this, the damage was $34 and change.  So I gave them $42 and was done with it; they hadn’t questioned my ordering so many dishes (sometimes I have servers tell me I’m ordering too much food – when I’ve only ordered ONE dish!), they hadn’t bothered me about taking pictures, and in fact, they left me alone for the most part, refilling my water when necessary and removing my one empty plate.  They packed all of my food to go without any problems, although they did seem actually surprised that I hadn’t finished it all, oddly enough.

I’m happy to say, I have found a neighborhood Thai place I can dine at as often as I’m in the mood for Thai… and it’s not overpriced, not a trek and a half, and I don’t even live in Manhattan.  It’s totally within a 5 minute walk from my place!  Bangin’.

Of note: I was trying to figure out if the people who own the place/work there are Chinese.  Though their English was perfectly fine, eventually, a few other Asian people came in who I assumed to be Thai at first, and the woman spoke with the people working extensively in another language.  Initially it sounded like Thai to me, but (through my limited dealings with listening to Cookie speak in Thai on the phone) eventually I discerned that it wasn’t Thai, but sounded much like a really obscure dialect of Chinese (the further from Cantonese or Mandarin a dialect sounds to me, the more obscure it generally is).  Moments occurred where I swore they were speaking Cantonese, but conversation would progress and no longer be understandable by me.  It also interested me that all of the patrons of the night were of Asian descent except for one couple who appeared to have never been there before, but seemed pleased with the offerings as the night wore on (ie, I didn’t hear any complaining, although they did ask that something be made less spicy before ordering). 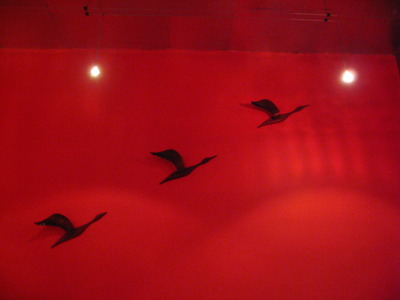 Yvo says: Don’t expect super authentic Thai food, but don’t expect take out quality (read: bad) food either.  Everything I consumed was solidly decent, and I’m sure return trips will tell me more.  Stay tuned for reports from those visits… I did enjoy the place enough to decide it will be my local Thai place (which I’ve never had before!- a local Thai place, one that I’d return to time and time again, that is).  If you go here, you may just see me here.
recommended for a neighborhood joint; not destination dining