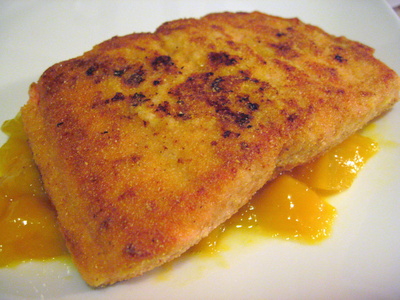 What’s this?!  Holy badoodies, FatGirl!  The Feisty Foodie is posting a recipe.

When was the last time she did that?!  Okay, so it hasn’t been that long, a little over a month… but it’s been ages since I’ve really cooked anything completely new.  I really have to break this habit, and so I am going to attempt to post at least one new recipe a week.  Attempt.  In my mildest of defenses, living alone, when I get home from work, I really just want to cook a quick meal and eat.  So that doesn’t lend a lot of time or energy to experimentation. 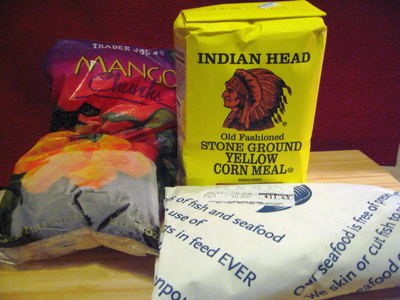 As it happened though, last week, I managed to flip on the Food Network during a show that I don’t completely detest the cook, and she was making something that sounded interesting.  Her name for it kind of sucked, though – Corny Mango Salmon – so I gave it my own name.  (Sunny isn’t bad – she’s laidback and relaxed with the camera, and she doesn’t ramble on with obscure foreign or technical terms, she seems nice enough.  Someone I might be friends with, even, though some of her stories border on the “I don’t really believe you…” side.)

So I decided to make it, with my own revisions, of course. 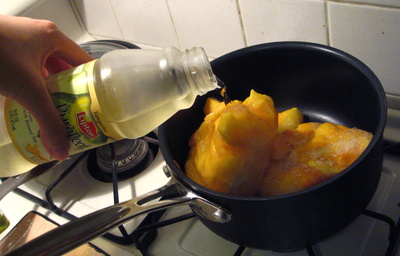 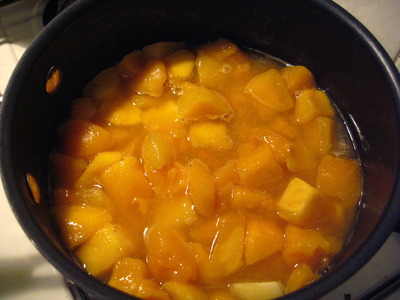 Over a medium heat, let it come to a small bubble.  I didn’t manage to take a photo of the next step, but if you’re using mango chunks like I did, well, use a hand blender (I couldn’t find mine) to puree it a bit so it thickens nicely, or ummm use kitchen shears, being really, really, really careful not to scratch your non-stick pot.  Or not to snip a few bristles off your silicone brush.  Not that I know anything about that.  Anyway… 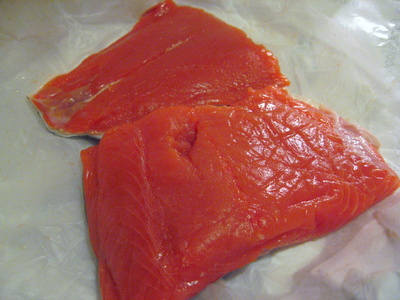 In the meantime, prep your fish.  I rinsed and patted mine dry.  These are wild salmon from Whole Foods… it happened to be on sale so it was $12.99/lb. instead of $15.99/lb.  If I trusted my Cantonese a bit more, and trusted the Chinese fish markets a whole lot more (they always smell like fish, which grosses me out to no end!), I would skip all the hullabaloo of Whole Foods and go to a Chinese fish market.  Alas, t’is not to be. 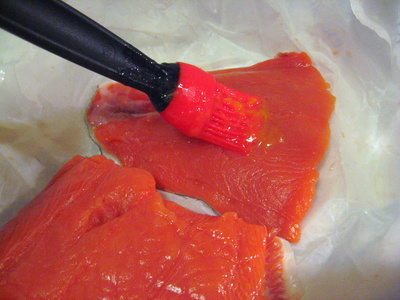 Once the mango puree has thickened considerably and has cooled down a touch, brush it liberally on your fish.  (Don’t dip your brush straight into the pot; put some in a small bowl or dish and use that.  I put mine in a small container and did take a photo, but the above photo illustrates better this step.) 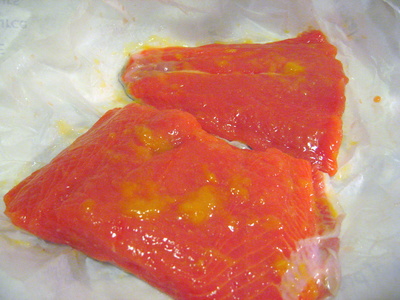 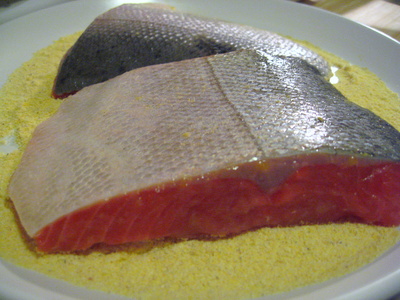 Now it’s dredging time!  Really get that cornmeal/flour mixture to stick on there for an optimal crust…

Heat up a skillet, add butter and olive oil, and let it get really, really hot.  This is important for a good crust and so you don’t overcook your salmon. 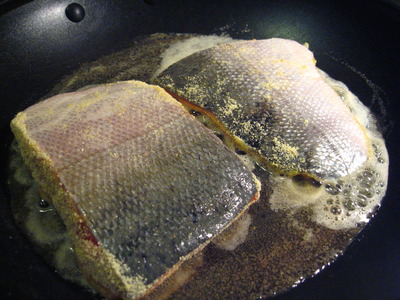 Place the fish, corn meal crusted side down, into the skillet.  A few minutes on each side should do the trick. 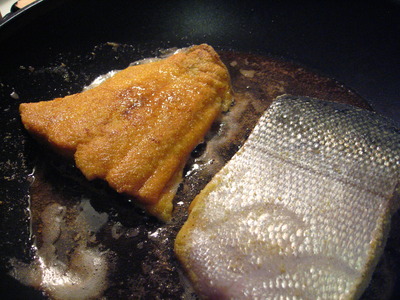 Just a few minutes… no more, or you’ll wind up overcooking the fish, and it’ll be dry and icky.  After I was satisfied with how done the salmon was (I like mine on the rare side, but not completely), I removed it and placed the fillets on paper towels to drain a bit of the butter off and to retain the crispiness. 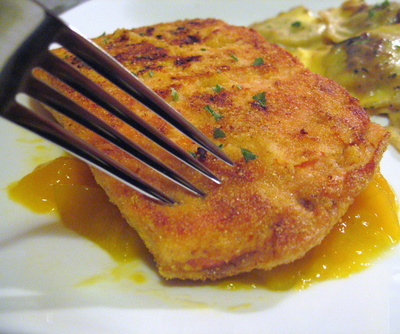 I plated a fillet on a bed of mango reduction.  And now, we eat. 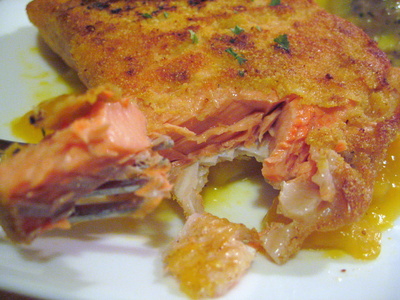 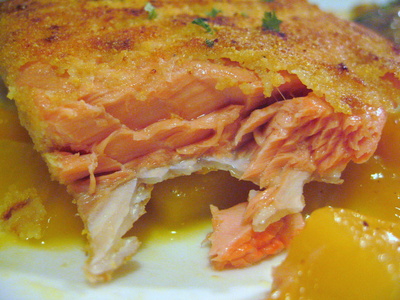 To be honest, if I made this again, I’d skip the mango part and just do a cornmeal crust.  I don’t like sweet entrees, and I’m against hot fruit.  I know this and yet I continue to make these things when I see them because they sound so darn good!  Unfortunately, they are tasty, just not for me.  Ah well, pretty, pretty fish…

***Next week: an ingenius way to use up the mango reduction and some other leftovers I’ve got (hint, hint).  Well, I think it’s ingenius, have to test it to see if it actually tastes good… We’ll see, I suppose.