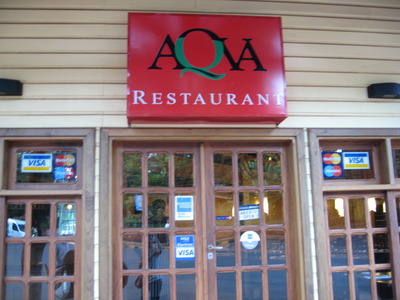 **if you look closely, you can see me in the reflection, holding up my camera

By our 2nd night in Iguazu, my friends were getting a bit tired of red meat and craved salads, greens, anything but steak.  The brimming-with-useful-suggestions concierge slash owner of the hotel we stayed at – the RioTropic – strongly recommended Aqua, a seafood restaurant, and so off we went.

The place inside distinctly reminded us of a converted steakhouse with a country western theme- gleaming wood, wood floors, wood everywhere but not the dark wood we’re used to in NYC steakhouses – a rustic mix of country music and some Beatles thrown in (setting me off on “Do you know this one?” “How about this one?” while singing random Beatles songs, pre-1964).  It was a cute place, and I lamented the fact that all of the other customers were clearly tourists until StB reminded me, sadly, that though this place was not quite expensive by our standards, it was pricier than what most of the locals could probably afford; just that day, we’d driven past quite a number of shacks that didn’t appear to have running water (but had electricity; some of the larger shacks had air conditioners jutting out of the windows).  Then again, what do we know?  There are some upstate farms that have the option of running water, but prefer the cold, fresh water of an inground well. 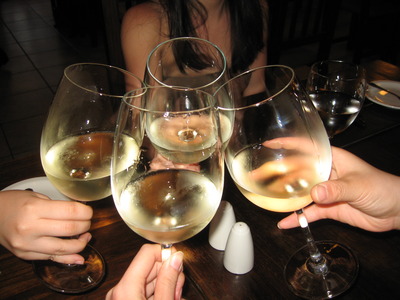 We started off with an Argentinian white, crisp and lightly sweet. 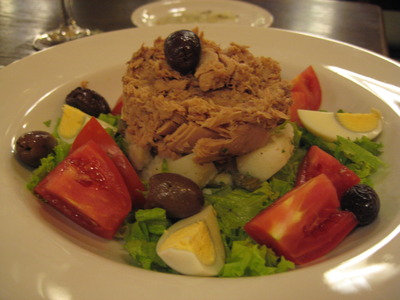 As I mentioned, we were all craving not red meat and that’s why we were at a seafood restaurant (that did have steak on the menu, of course).  MD/PB started off with a nicoise salad of sorts, topped with tuna, olives, capers, egg,… she liked this a lot, happily digging out all of the olives to eat. 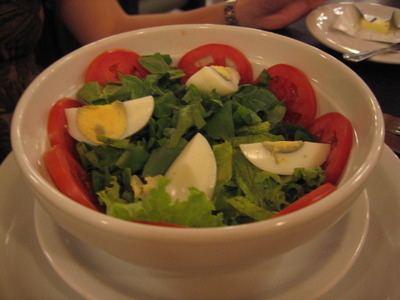 HB and StB both opted to get choose-your-own-salads.  HB’s salad had egg, tomato, arugula. 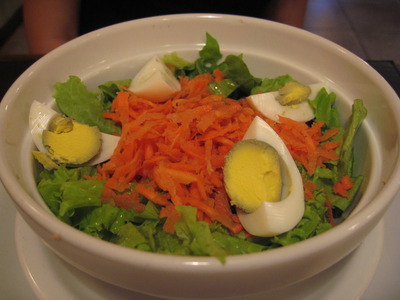 StB’s salad had carrots instead of tomatoes. 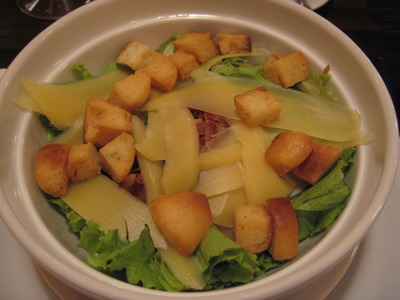 Of course, being me, I wanted something healthy and promptly ordered… a Caesar salad, covered in [room temperature] slivers of Parmesan cheese, croutons, and bacon… so yummy though!  Their house-made Caesar dressing was delicious as well, just enough for my salad, I was happy.
***Note: I did notice in one of the supermarkets we went into that the eggs were not refrigerated; I’ve noticed in other countires some dairy products are just not refrigerated as a rule.  I understand it’s actually common practice to not keep cheese cold, since being cold deadens the taste/”stinkiness” of the cheese, and I did not get sick from consuming the above salad. 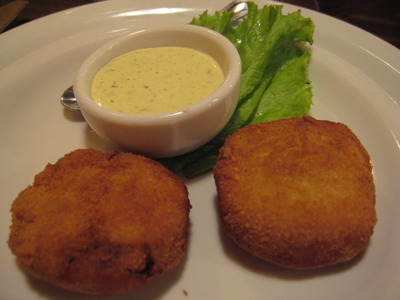 We also ordered, at my suggestion/request, the fish croquettes with a lemony dipping sauce.  The fish – surubi – was, as the waiter told us, the local river fish, very fresh, and very delicious.  Funny enough, after we’d all ordered various versions of it, MD/PB noticed that through the windows, across the street there was a giant billboard of the fish… which looked suspiciously like catfish.  My quick Wiki of it just now tells me… it is catfish.  Ah well, still tasty!  The lemony dipping sauce was really good, and in my guess, mayo based, with lemon and perhaps some garlic… 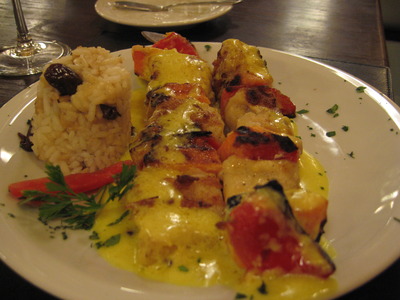 MD/PB ordered surubi with fruit, not knowing it would come out like kebabs.  She liked her dish very much, though the details are sadly already escaping my mind… 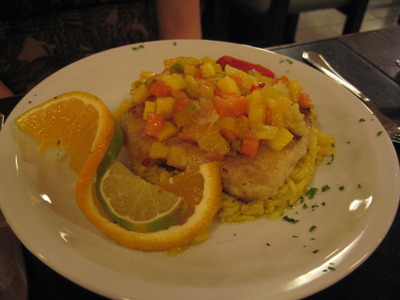 HB’s surubi with a fruit salsa atop it was huge and she could not finish it.  I know she liked it though… 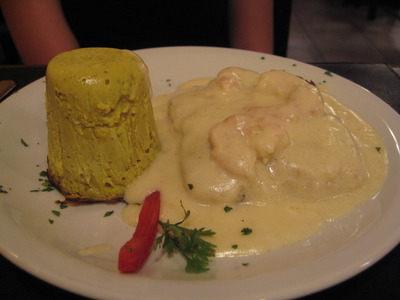 StB had not known that her surubi would come covered in a cream sauce, which she normally does not like, but she said this was good, with shrimp on top, and the side flan looking thing was veggies… she was surprised to also find that the veggie flan was cold in the center, but tasted good anyway. 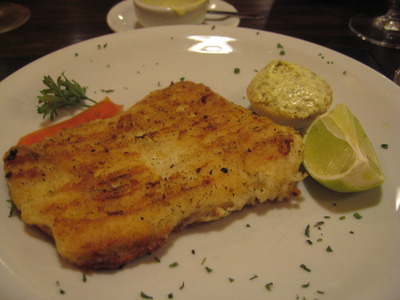 I ordered grilled surubi, plain, as I felt my throat was scratchy and the other option was fried; the bill said it was grilled.  When it came, though, I thought it was fried, but now I’m not even sure.  Maybe they grill-fried it?  I don’t know.  It was pretty damn tasty though, with more of the lemony sauce that had come with the croquettes on the side, and now that I think about it, it was extremely similar to the croquette.  It was very good, I was happy with my choice. After all that, we were pretty full, but opted for dessert anyway.  It looks pretty, but it was only alright, I found it too sweet but I’m not a sweets person!

Dinner came out to about 320 pesos total, which translates loosely to about $25 USD per person.  I definitely recommend the place if you’re tired of steak – maybe even their steak is good so you could even go there if some of your group is tired of steak and others aren’t – the waitstaff spoke English and were helpful in their recommendations. 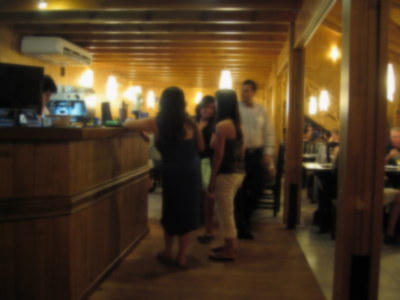 to give you an idea of the decor

Yvo says: A definite if you’re in Iguacu Falls and don’t know what to eat.  It’s in the city center, so there are a few things nearby to look at and walk around if you’re so inclined, though we did not do such a thing.
recommended