On our last day in Iguazu Falls, we decided to try eating at one of the nearby hotels.  We’d heard that Las Cataratas actually had a good buffet, which wasn’t open when we went, so instead we decided to just eat at their snack bar… very good call, nearly as soon as we sat down, the skies opened up and it poured. 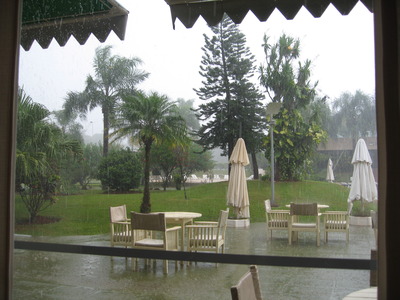 Hey, it is the rainforest, right?  (As several people “reminded” me when I lamented the rain upon my return.) 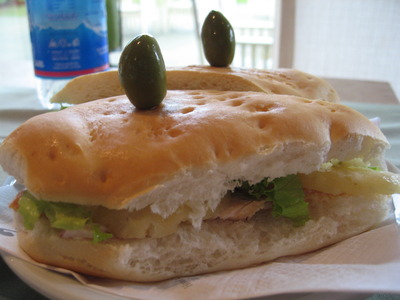 MD/PB ordered a sandwich whose components escaped me, but it looks like tuna… and olives… which we know she adores olives!  She thought it was not bad. 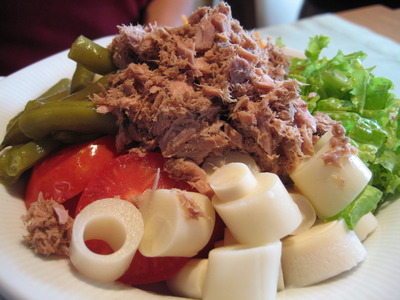 StB still craved greens and so ordered a sort of salad nicoise, with hearts of palm, among other things.  I believe she liked it; I didn’t hear any complaints. 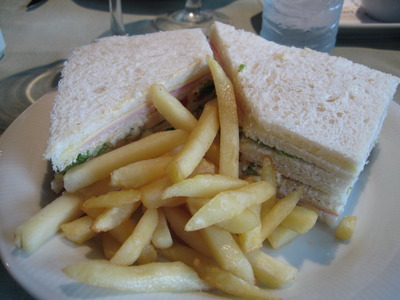 Remember, if you’re eating with me, it’s a smart idea to order the same thing as me so you don’t have to wait while I take a picture of your dish!  Just kidding, sort of.  HB and I both ordered the club sandwich, she for the fries, me for lack of any interest in the other offerings.  The fries were a bit soggy but still, fried potatoes, yum. 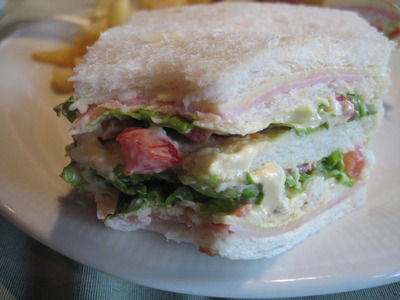 I actually liked my sandwich quite a bit, though I got tired of it and quite full when I was halfway through the second half… at which point I discovered there were 6 slices of bread in there!  I was pretty surprised as I’m used to 3 slices of bread in club sandwiches, but whatever, it was pretty darn tasty.  I peeled them apart and wound up eating it as separate sandwiches for a little bit before I got bored and ate all the cheese.  I know, I’m a pig.  Oh, and the tomatoes, I love tomatoes!

Yvo says: Standard hotel snack bar food, done alright, nothing surprising or fantastic, although our hotel didn’t have a snack bar of which to speak, so this one, being walking distance, was not a bad thing at all.  The rain stopped by the time we finished eating, and we continued on our fun trip.
middle of the road