It’s taken me months to bring myself to write this, and even now I find myself at a complete loss with tears welling up in my eyes. I needed to mourn, but I’ve never been one to mourn quietly or alone – an odd thing for one who suffers alone in her own mind, and I imagine something quite difficult for my husband and loved ones to understand. I don’t even understand it. 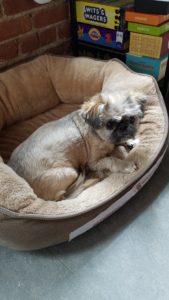 The day this will publish – April 13, 2018 – would have been Keywee’s 16th birthday. Would have been. Keywee was my faithful, loving, adoring companion. She was by my side through everything – even when she wasn’t.

I adopted her defiantly, under the guise of wanting my mother to have a creature to care for after my father’s passing. My mother repeatedly told me she didn’t want a pet, but when the opportunity arose for me to adopt a puppy from someone’s two dogs who’d mated, I jumped. I didn’t pick Keywee. I wanted the runt of the litter, presuming the runt would stay small forever, but Keywee was the only unclaimed pup of 3, she was the “plain” one – not the lone boy, not the runt, just Keywee. A week after I took her home, I received a call from her parents’ owners: “The runt was just returned, do you want to trade?”

Indignant, I exclaimed, “No! I already love Keywee. I’m keeping her.” That was the last conversation I ever had with them.

Keywee took years to settle into being herself, but she was feisty and lovable. Even those who didn’t like dogs, or those who claimed to not like dogs with pushed-in-faces, or those who just didn’t like pets, seemed to like her. Or they humored me and said they liked her, anyway. It doesn’t matter. Keywee was my family. Keywee had impeccable taste in humans; she growled at people that I later would discover were not people I wanted in my life. She snuggled up to me in my sad moments, and joined me in my happy moments. We danced around my living room in fits of happiness, in moments of bliss.

She was my best friend.

I could go on… and on… and on. I could tell you how guilty I feel and how I feel I failed her in her last months. How shocked I was when her health took a sharp turn – from pretty decent for a 15 year old dog to sudden failure of nearly everything. How distraught I was, how strangled I felt in balancing between caring for a newborn and caring for a senior dog.

But I’m not here to complain or look for forgiveness, or absolution.

Faithful companion.
Best friend.
Chocolate thief.
Light of my life.
My absolute favorite creature to wake up next to for so many years.

Her wonky smile, her happy tail, her tongue poking out frequently. Her tiny paws, delicately crossed. Her prancing after being groomed, her moping when it’d been too long since she was groomed. Her absolute love of adventure. Her desire for nothing more than to just be by my side, whether that was curled up on the couch, curled up in bed, curled up on the passenger seat as I drove and drove to nowhere and everywhere.

Keywee, you were the best thing I ever did for just me, myself, and no one else. I’ll never forget you. I’ll never stop loving you. And I hope one day, when it’s time, you’ll meet me at the Rainbow Bridge.