Two weeks ago, I was standing in a park alongside the James River in/outside Richmond, Virginia. I’d just had a very difficult moment while atop some rocks partway through the river, paralyzed by fear (fear of dropping Jinx in the river; fear of dropping my phone in the river; fear of falling in the river because I don’t know how to swim). I had to forcefully decline crossing the rocks, something that probably both amused and annoyed my hiking partner.  I mean, I was wearing a Totoro dress during this whole incident, which was likely amusing enough in and of itself…

But mere minutes later, back on dry, safe land, he was pointing at a steep rock scramble. “You probably can’t do that, huh?” he said matter-of-factly, no judgment in his voice, just very frank. Something in me stirred, and before I could think twice about it, I snapped, “Watch me,” and scrambled up, stopping only once about halfway up it to breathlessly say, “I can’t do this, how will I get back down?” and then continuing up the scramble before I fell.

He said, “There’s another way down,” which meant there was another way up, but that didn’t register until later.

A little less than 6 years ago, I climbed Machu Picchu and Huayna Picchu for all intents and purposes alone. 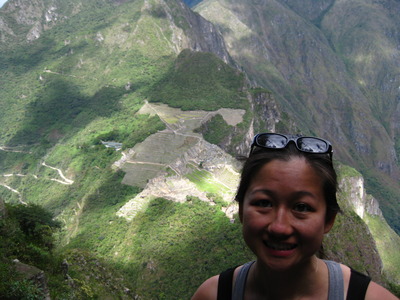 At some point during that trip, my then-boyfriend made an offhand remark that stuck with me through it all. While I’ve repressed the exact words, the meaning remains: you can’t do this. Now, before you all shriek about what a jerk he must’ve been – reality is that he was one of the most supportive partners I’ve ever had. He always believed in my writing talents and encouraged me to pursue that to the ends of the earth.

However, he was fully aware of my fear of heights and my lack of physical ability. What he said was likely more along the lines of, “if you find yourself unable to finish the hike, or if it’s too much for you, don’t be afraid to stop. Don’t hurt yourself. Don’t push too hard.” Or something that sounds much nicer than “you can’t do this, why are you trying?”

But somewhere in my brain it translated to “you can’t do this!” and my bratty stubborn mule side reared up and said “WATCH ME, BUTTFACE” as I powered up both of those stupid mountains alone.

Don’t tell me I can’t do something, because I will go out of my way to prove you wrong. Unless I don’t care about you or your opinion, in which case, naysay away…