This post goes back to when the weather was nice and we could sit outside to eat and everyone was raving about Charliebird and the razor clams there, and when I was still dating this guy – before I discovered how completely insane he is. (I actually told a friend that there was a real possibility my body would turn up at some point, butchered neatly into the corresponding cuts were I a pig or a cow.)

In any case, I took nice photos with my nice camera so I might as well tell you way late about this place that’s no longer on everyone’s lists. 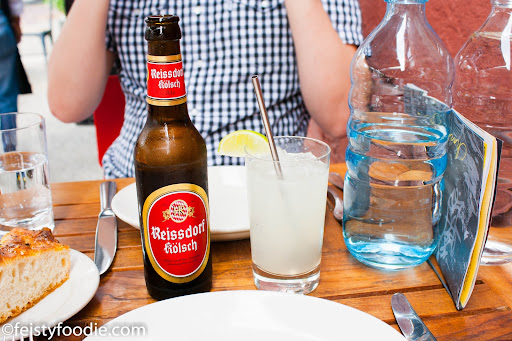 Butcher got a beer, I got a gin drink (pretty sure it was the Hemingway made with gin; yes, I asked for a different liquor in my drink). The drink was solid and very heavy with the liquor; I actually had to stop drinking after that because it was warm out and I was getting dizzy.

I should also note that because everyone said how busy the place is constantly, I insisted we meet and eat at 5:30 (when they open). The place was empty and was still pretty dead when we left close to 7 on that Saturday. (I felt super old, eating at 5:30pm on a Saturday.) 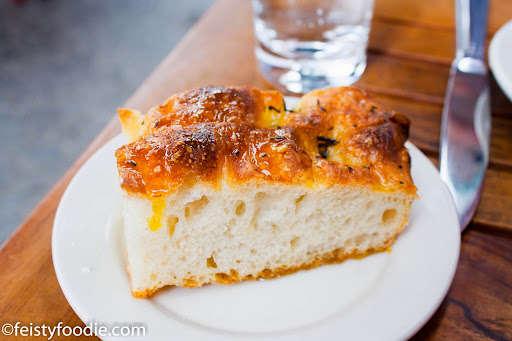 Bread that was fluffy and tasty enough but not a particular standout either. 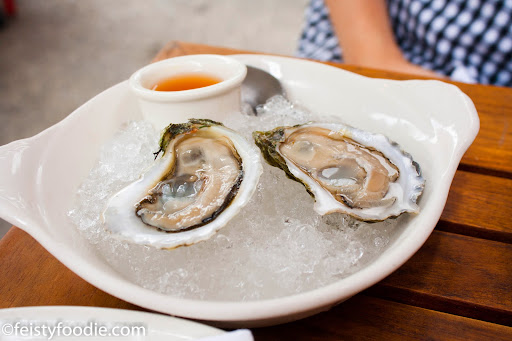 I love raw oysters and really wanted to try the tomato vinegar, which unfortunately wasn’t quite as pronounced as I’d hoped. Perfectly fine – the oysters were fresh and lovely, but I moved on to the next dish. 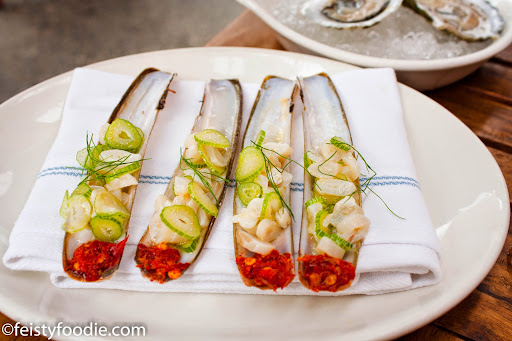 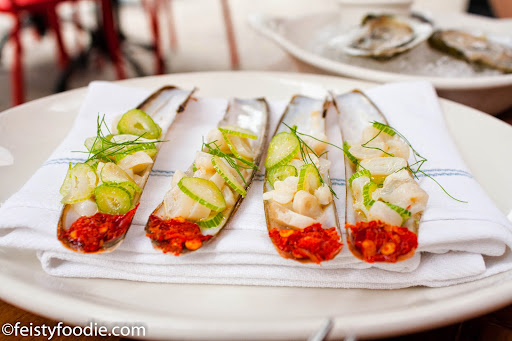 The RAZOR CLAMS!!! which was the dish that got me in the door in the first place. I’ve mentioned my love of razor clams and my constant quest to find them in NYC – I wasn’t expecting to find the razor clams of my dreams here for lots of reasons (specifically because those dreams involve my father, who cooked them Cantonese-style), but I wanted to love this dish everyone raved about. I really wanted to, but I was woefully disappointed that they’d chosen to slice up my razor clams, removing that distinct visual and texture that is afforded by keeping razor clams whole. The flavor was fine, good even, and I couldn’t handle eating all of the chilis at the edge of the shell – too spicy – but overall, it was a good dish.

It was not omfg-go-eat-this-now amazing. I liked it, but didn’t understand the hype. Also, please note that having spoken to a few people about this dish, at least one said that her razor clams were not sliced up. It is entirely possible they have since changed the dish, or perhaps mine was a fluke. I’m not sure. But it definitely detracted from my experience – though I’m also not sure if leaving them whole would have made them the amazeballs dish other people claimed it was. 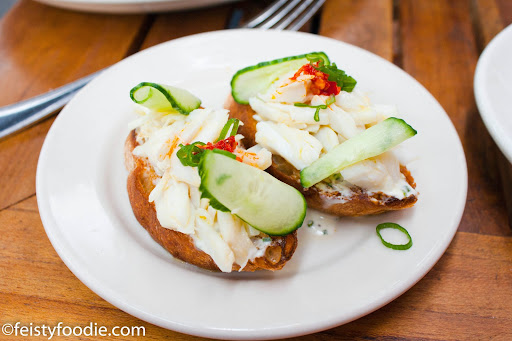 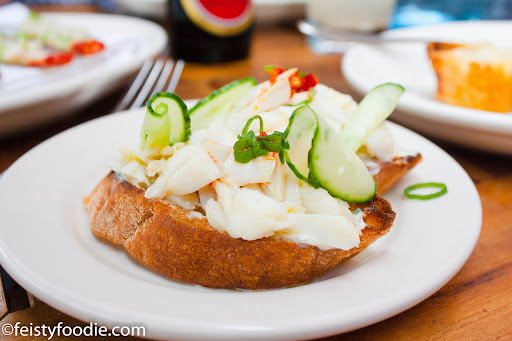 I wanted to try all of the toasts but Butcher wisely limited me to one, so he chose the blue crab toast. I really enjoyed this – the freshness of the crab, the almost creaminess of the meat against the crisp toast was very tasty. There wasn’t any extra adornment just for the sake of adornment – no gilding the lily with cheese or anything, just pure taste. Love. And the slight kick from the chilies, with the sweet coolness of the cucumbers… perfect.

I’m a little surprised it’s still on the menu, as blue crab isn’t in season right now… perhaps they used canned in the off months? Or perhaps they don’t update their website… 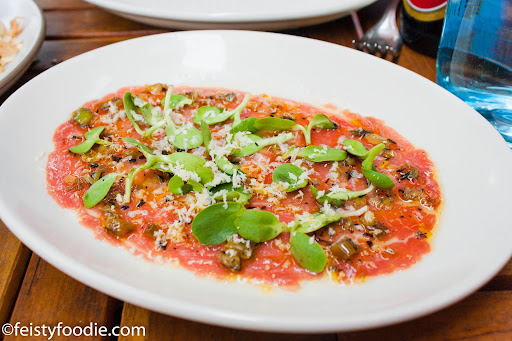 I recall Butcher requesting we add this dish because my choices were all fairly seafood or vegetarian focused – dry aged beef carpaccio, which turned out to be absolutely delicious. Paper thin slices – nay, shavings – of earthy beef, splashed liberally with olive oil and sprinkled with greens… just lovely. 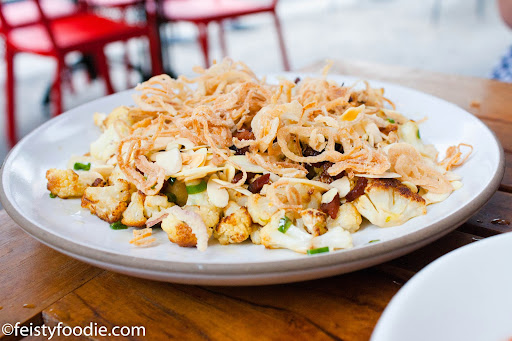 I was also limited to only one vegetable dish, sadface, but chose well with the caramelized cauliflower – really phenomenal. Cauliflower brought to new heights with the browning, scattered with almonds and crunchy (fried?) shallots… I loved this dish hard, and even the self-proclaimed fierce carnivore agreed that it was delicious. 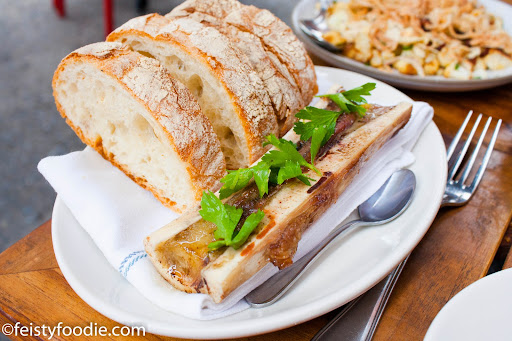 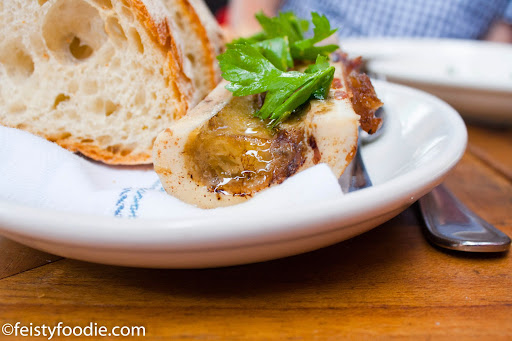 Last but certainly not least, the bone marrow topped with an anchovy and lemony parsley. I’m always curious to try new ways that people impart salt to bone marrow – because as delicious as it is, it needs a punch of salt. The classic sea salt is good, but caviar/roe is better… anchovies, I am on the fence. I enjoyed the fishy salty quality of the anchovy, but I don’t think Butcher was a fan and preferred just the marrow itself. Regardless, there was a lot of thought put into this dish and I enjoyed it.

Though the razor clams didn’t live up to the hype, the rest of the meal was tasty and I definitely intend to make a return visit – hopefully sooner than later. There are other things on the menu that sound promising, especially given the hand that made these dishes as good as they were – I am sure something on this menu is absolutely astounding.

Plus I want to order that cauliflower dish again.

« CDG and KEF
League of Kitchens – Cooking with Nawida »