Ah, where to begin that accurately expresses all that I feel for my darling Guacamoleyes, aka my former coworker that I left just as she started. Even though we only worked together for a short time, our friendship began immediately; I don’t remember what off-color joke she or I made but that was it, we were done. Friends forever.

To that end, as soon as I’d left, we made plans to eat together: to explore her new neighborhood. It turned out I was very familiar with a restaurant she wanted to try – Salt & Fat – where I’d previously dined twice. Since I’d enjoyed it within a short time of its opening, I was happy to return and see if anything had changed. 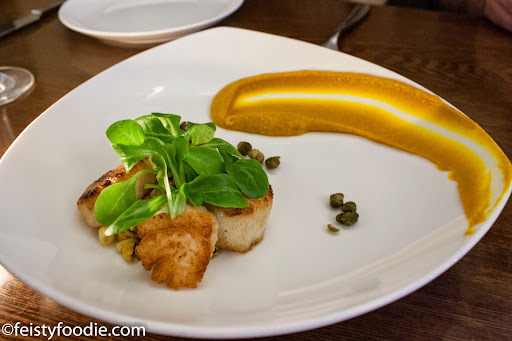 The three of us – Guacamoleyes, her boyfriend The Tank, and I – started with the seared scallops and truffled carrot puree. The scallops were tender, but as last time, the carrot puree really was the star – combined with the corn salsa you can’t see – just elevated this dish to where you wanted it to be.

(Funny: this was the first time I met The Tank, and before dinner, I sent Guacamoleyes a link to my prior review. She sent it to him, and when this dish arrived – it’s impossible to see in this picture – there were four scallops, not three. He looked at me and said something along the lines of “oh my gosh, how will we split 4 scallops amongst 3 people?” – the perfect blend of snark, sarcasm, and teasing. Some people you just know immediately are kindred spirits!)

Wanting greens, as I’m wont to do, we ordered the English cucumber salad with pickled honeydew, black sesame, and some other dollops of things. I liked individual components of the dish, but overall it didn’t quite do it for me. Something was missing to take it from “interesting” to “wow” – though I don’t recall her or his exact opinions of the dish, I believe Guacamoleyes and The Tank had opinions that differed slightly from mine – I believe The Tank liked the sauce so much that he requested bread to dip in it at the end, which our wonderful server happily obliged.

Korean BBQ wraps consisted of marinated skirt hanger steak, pickled daikon & jalapeno, topped with crispy shallots. Funny enough, I didn’t get any jalapeno, while Guacamoleyes got some and wished she hadn’t. I wouldn’t have minded the kick, but the steak was suuuuuuper tender and wrapped in the butter lettuce, delicious. The Tank and I were happy with our bites, though Guacamoleyes wound up giving her jalapeno(s) to him as she wasn’t fond of the spiciness.  Really tasty dish.

Next up: the Cu-Bun, which I didn’t fully understand the naming until I bit into it; I’d had their prior iteration of this dish and enjoyed it, but the play on the name – like a Cuban sandwich – made me giggle. The pickled veggies inside cut right through the fat of the bun and brought the dish the right amount of acidity to make it a WIN.

I don’t know what kind of monster ducks we’re raising lately, but I’m totally into the bigger breasts (Cafe Boulud, Ristorante Morini, and now Salt & Fat). Long Island duck breast with butter lychees, grilled frisee (hiding behind the breast) and “sweet and sour jus” – I think ‘butter lychees’ meant poached in butter, because these were insanely good. Guacamoleyes especially loved the grilled frisee, but I was enamored of bites of the duck – which were fantastic – but WITH a bite of lychee, just INCREDIBLE. Oh my gosh!

Roasted Berkshire pork belly, with cannelini and kimchi ragu, bacon jus and dandelion – let’s get the bad out of the way first. Those dandelion greens should have been cut down more. They were unwieldy to pick up and try to eat without being a total foof and cutting them daintily with my butter knife. The pork belly, however, spoke to me and I enjoyed mine very, very much; Guacamoleyes unfortunately doesn’t quite love the texture of fat the way I (and I think, The Tank) do, so she wasn’t quite as crazy about this dish. However, the flavors were spot on, and I enjoyed it greatly.

And then the one huge miss of the night.

We didn’t need dessert, but our awesome server described the special dessert to us with such enthusiasm… well, their regular dessert menu boasts two items that have been on the menu since they first opened. They are both perfectly fine desserts – one way more to my tastes than the other, but both have their upsides, and are both incredibly simple in their genius – so when he launched into the description of this (which I made him repeat at least 3 times so I could write it down), I was … well, put off. I said so to Guacamoleyes: there’s too much going on, it sounds too busy, there’s just… eh. Well, here’s the description and you can decide:

That’s a mouthful. We ordered it anyway, and the universal feeling was that it didn’t work. I actually have a fairly vile comparative description in my mind of what it reminded me of, but y’know, some things may be left unsaid. Let’s just say I wasn’t into it – some of the individual components were lovely, but there was no connecting piece for the overall dessert, and it just didn’t work. Too much going on.

When our server came back to check on what we’d thought about the special dessert, we politely told him our honest opinions. He was disappointed, but appreciated our feedback and said he’d share it with the chef. Then he offered us one of the standard desserts on the house. I demurred, saying it wasn’t necessary, but left the final decision up to Guacamoleyes and The Tank. He brought us his personal favorite, which are the rice krispies treats with marshmallow ice cream. I think that marshmallow ice cream is insanely good, and I happen to have once upon a time been very close to a prominent pastry chef who was fairly well known for making excellent marshmallow ice cream. Unfortunately, I never had the chance to have his, but I know that his method was widely taught for a while. I don’t know if the chef at Salt & Fat uses it, I just know that it’s delicious. The rice krispie treats themselves are, well, rice krispie treats, but they aren’t overly sweet and I liked that they’d cut these flatter/thinner than “normal” rice krispie treats, giving each bite a more interesting texture than a huge mouthful of the treat. Good call!

Minus the huge misstep with the dessert – which it looks like they’ve kept on the menu thusfar – and some minor personal “I didn’t care for that, but it doesn’t mean it wasn’t good” bits here and there – everything was, once again, delicious and just the right balance of salt, fat, and acid to keep things from tasting too bogged down. I thoroughly enjoyed my meal – as did Guacamoleyes and The Tank – and I would not hesitate to return. I highly recommend any of you also visit… it’s that good.