One of the things you simply must eat while in Louisiana is, of course, crawfish. Luckily, the season had just started, though Jenn informed me that some places were only able to get the lake kind as opposed to run-off (I think those were the names; but basically, farmed vs. wild-caught, where farmed tends to be uniformly sized, while wild-caught is all sizes and tastes sweeter, better). I’m no stranger to crawfish and have sucked my share of heads in my lifetime (though being a NYC girl born and raised, plus spending 25% of my domestic travel time on the West Coast, I don’t eat that much crawfish overall in terms of my seafood consumption). 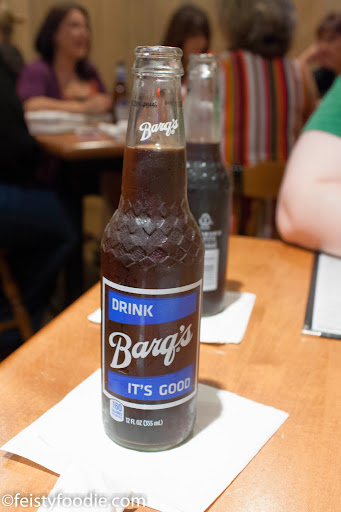 One of the other things I always do when I’m in the south is drink root beer. Barq’s was easily the most common root beer I found while in Louisiana; guess they’re a Coke state? – but no matter, the extra kick of caffeine jazzes me up and I like Barq’s just fine. (Though I do long for the days before Coke bought them, and I could only find it in Texas – okay I was 10 at the time but geez that was a lovely summer…) 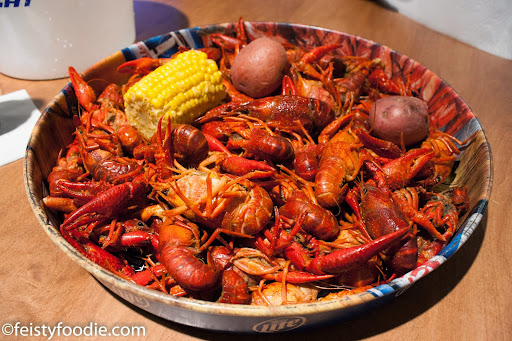 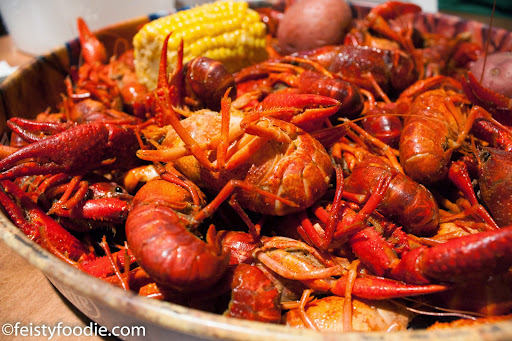 Our appetizer – 3 lbs of hot boiled crawfish – came quickly to the table. Mud bugs! Let me just tell you that the way people feel about this type of seafood eatin’ has a lot to do with how they were raised, what they’re used to: blue crabs, crawfish, and other smallish items that you eat and put a lot of work into (and quite frankly, cuy or guinea pig is the same): it’s a lot of work for very little payoff. I grew up eating blue crabs while sitting around the dining table, with my mom and sister, gabbing away, making a mess. It doesn’t bother me and those experiences are generally, for me, less about eating and more about bonding. I enjoy the crab, too, but… yeah.

All this to say – I don’t shy away from foods that require work to eat. Jenn and I had a blast sitting there, ripping heads off the crawfish and just enjoying the tail meat. I found them to be cooked nicely, and well-seasoned; in fact, towards the end, it became too spicy for me as the heat built from the start. Tasty little suckers – sweet meat! 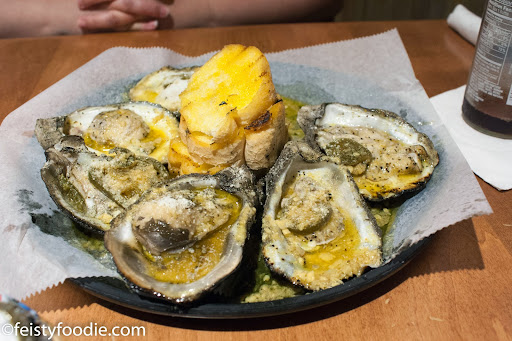 Oysters are another common Louisiana treat; these are different from what I get up north. Usually, I get a choice of west coast vs. east coast; bigger vs. smaller; but here it’s Gulf oysters and they are curious creatures. On the big side for oysters, and kind neutral in taste – well, first, let’s discuss the above. The menu simply said ‘charbroiled’ or raw… so I assumed incorrectly the charbroiled ones would be grilled or charbroiled but left alone.

Let me back up – I actually asked our server, who seemed completely unfamiliar with the menu and a bit dopey, to be honest – maybe a high school or college kid just doing this for some spending cash? – if I could have half a dozen, but split between raw and charbroiled, because I knew Jenn wasn’t going to eat any. When a full dozen arrived – half dozen each – I just shrugged it off. I can eat a lot of seafood.

In any case, when the above arrived, I was a bit curious. Butter… garlic… cheese!… and jalapeno slices decorated each oyster. I shrugged and ate them; they were fine, though the taste of the oyster was overwhelmed and drowned out by the toppings. All I tasted was garlic and cheese, and the oiliness from the butter (I removed the jalapeno). I didn’t really understand the appeal – and thought this place was strange – but chalked it up to the place. I later found out – at another seafood place, reading the menu – that this is a common preparation of Gulf oysters in Louisiana. Huh, interesting. 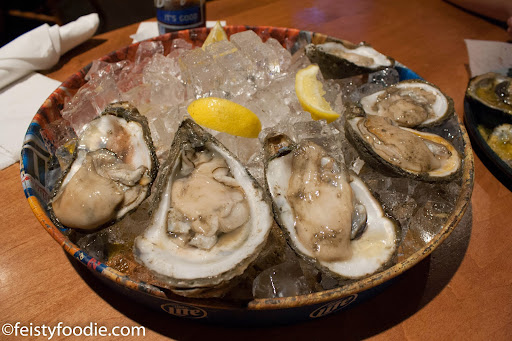 As for the other half dozen raw oysters… no horseradish, no mignonette, no cocktail sauce. A little strange – I’m not sure if there was hot sauce on the table – but I usually eat mine fairly plainly, so no big deal. Except these oysters were not shucked properly. I don’t often – okay, never – send food back, it doesn’t even cross my mind, but the amount of dirt and mud on these was just so off putting… Jenn, who doesn’t eat oysters, actually commented on it to me. “I don’t eat oysters, but… is there supposed to be so much mud there?” and I finally gave up after eating one very gritty oyster. I pointed it out to our server, who did not seem to give a crap; she just looked at me with no emotion and said “do you want me to take this off your bill?” Um, well, actually… if you can give me good oysters…? but I shrugged and said yes, please.

But she didn’t take away the offending oysters. The entire platter – untouched, uneaten – sat on our table for the rest of our meal, even as she cleared other plates. What the heck? Did she think I was going to eat them now that they were free? No…

Also, I should note that I had oysters at two different places, and both places shucked them in such a way that it was necessary for me to use my regular sized fork to remove them from the shell. The oyster shells weren’t clean so I didn’t put them to my mouth to tip the glorious oyster itself into my mouth; these seem to be much less about the delicious oyster liqueur than about the meat itself. I chewed my raw oysters – something I don’t tend to do – but I’ll save that description for the post about the meal where I actually ate raw oysters.

I mean – you can correct me if I have the wrong impression – but that was my experience at two separate places. Maybe I was doing it wrong? but my dining companion at the other place seemed to be doing much the same. 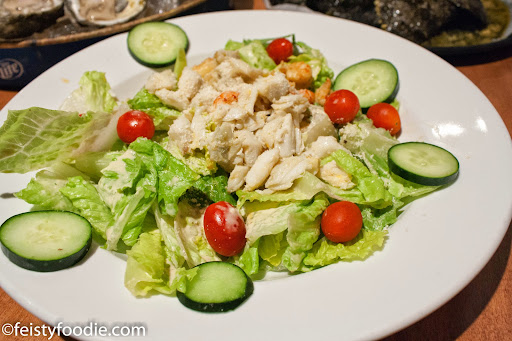 For our main courses, I followed Jenn’s lead and ordered the grilled seafood Caesar. I knew this wouldn’t be a vegetable-heavy trip, so I tried to get in veggies where I could. The salad itself contained fresh greens, and was dressed a little on the heavy side for me, but I’ve been eating my salads sans dressing lately, so I am not the best indication. The seafood itself was fine and tasty, but I found it odd that it claimed the seafood was grilled when it hadn’t seen the kiss of a flame ever. I am pretty sure that they didn’t pick that seafood themselves, either, which isn’t a completely terrible thing… but I wish they had. It would have made more sense to me.

Overall, I enjoyed my time at Sammy’s, despite my negative feelings about our server and the horribly dirty oysters. The atmosphere was casual and laidback, and you could tell that everyone comes here to hang out, enjoy ginormous drinks and some tasty food for inexpensive. If this were in my neighborhood, I can definitely see the appeal… I’d liken it to your local chain of restaurants that you enjoy but wouldn’t insist an out-of-towner visit. Basically… great to have locally, but not somewhere you should go out of your way to visit.

There was also a brief wait to get a table, but they had the nifty system that takes down your cell phone number and texts you when your table is ready, which helped.